Central Missouri and Northwest Missouri will be represented by five inductees apiece, Missouri S&T (formerly Missouri-Rolla) will have two members, Missouri Southern and Truman will both have one inductee, and Ken B. Jones, the first commissioner of the MIAA, will also be honored in the Class of 2010.
Dr. Forrest "Phog" Allen, Kathy Anderson, Dr. Mildred "Millie" Barnes, Vernon Kennedy and Earl Keth will be inducted for their accomplishments at the University of Central Missouri.
Allen, a football and basketball coach at UCM from 1912-19, is a legend in basketball circles. Allen gained most of his fame during his 39 years as head coach at Kansas, but as the Mules' basketball coach from 1912-19 he compiled a record of 84-31, and as the football coach from 1912-1917 he was 29-17-2.
Anderson, the current Associate Athletic Director for Internal Operations at Central Missouri, will be recognized for her athletic accomplishments for the Jennies. Anderson helped bring the UCM women's basketball program into prominence during her career from 1976-1980, leading the Jennies to an 82-31 record.
Barnes coached the Jennies basketball team for nine seasons, from 1971-80. She is credited with laying the foundation that helped make the Jennies' basketball program one of the best in the nation, never having a losing season while compiling a 156-63 record and winning two AIAW state championships.
Kennedy was a football and track standout from 1926-29. He was a three-time All-MIAA selection in football and helped the Mules to four straight MIAA track and field championships. He set school records in the javelin, shot put, and discus. In 1927, he won the decathlon at the prestigious Penn Relays.

Keth led the Mules basketball team to national prominence in the late 1930's. He was the star of the 1937 and 1938 teams that won the first two National Association of Intercollegiate Basketball (NAIB) championships. The Mules' first All-American in basketball, Keth is also a member of the NAIA Hall of Fame, and the Missouri Basketball Hall of Fame. 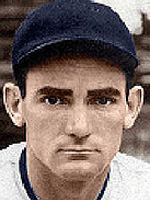 Vernon Kennedy
Induction Class of 2010
Vernon Kennedy
Football, Track Student-Athlete
Central Missouri (1926-29)
Kennedy was a football and track standout from 1926-29. He was a three-time All-MIAA selection in football and helped the Mules to four straight MIAA track and field championships. He set school records in the javelin, shot put, and discus. In 1927, he won the decathlon at the prestigious Penn Relays.
Following his Central Missouri athletic career, Kennedy played professional baseball for over 20 years, including 12 seasons playing Major League Baseball. He won 21 games for the White Sox in 1936, pitched the first-ever no-hitter at Comiskey Park in 1935, and made the American League All-Star Team in 1936 and 1938. After leaving organized baseball, he spent a number of years scouting and teaching at baseball camps. He then used his teaching degree for 12 years at Brookfield, Missouri High School before retiring in 1972.
An avid railroad buff his entire life, after retirement he and his wife began to collect railroad memorabilia as well as other antiques. This hobby gave them many years of activities and pleasure. Also a member of the Missouri Sports Hall of Fame (inducted in 1955), he competed in the Senior Olympics and Missouri Show-Me State Games each summer into his mid-80's before his death in 1993. He was the oldest participant in the Show-Me State games at that time. He borrowed a discus, shot put and javelin from his alma mater for practice and during the games.
The University of Central Missouri football field bears his name, and the award for the most outstanding athlete of the year at UCM is in his honor. He was honored as a UCM Distinguished Alumnus in 1983, and was inducted into the inaugural class of the University of Central Missouri Athletic Hall of Fame in 1992. Also in 1992, Kennedy received the American Legion Department of Missouri Distinguished Service Award. Kennedy passed away in 1993 at the age of 85.