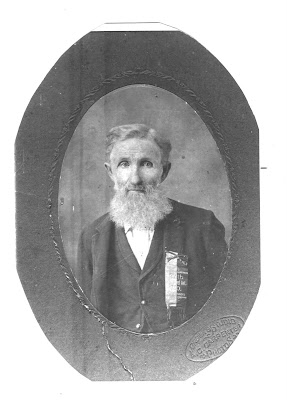 "After the organization of this company, upon a three year basis, they processed their arms from LieutCol. Grover by order of Gen. Lyon and commenced service 4 August 1861 until the command of Capt. Applegate after their organization were marched to Jefferson City, MO. August 19, 1861 under the command of Lieut Col. Grover from Jefferson City, August 20th, 1861 marched to Osage river to guard Railroad bridge across that river. About August 24, 1861 returned to Jefferson City on the 26th of August such members of this company as were mounted were detached under command. LieutCol. Grover with the 1st Illinois Cavalry Col. Marshall to march to Lexington to re-inforce the union forces at that city Dunksbury (sp), Pettis Co., MO. this company was ordered on a scout to Johnson County, MO ten miles south at Knobnoster were attacked by a body of the enemy lost several horses but no men killed or wounded. Overtook the main command north of Blackwater and proceeded with them to Lexington attached to the command of Col. Marshall. Marched to Warrensburg in Johnson Co., about Sept 8th, 1861, but finding the enemy in force in the vicinity of that place fell back the same evening closely pursued by the enemy burnt Blackwater bridge which retarded their progress this detachment of Company E participated in the nine days fight defending that city against a vastly superior force, but were finally obliged to surrender losing their arms and equipments and horses on the 4th day of August in connection with the Regt. was doing services wholly without tents or clothing sufficient to shield them from the weather or of equipment to hold their ammunition or utensils to properly cook their rations."