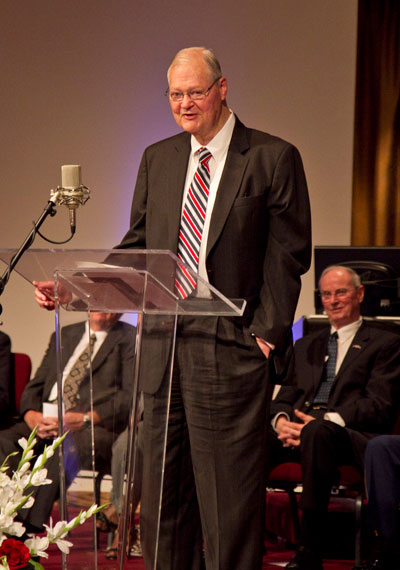 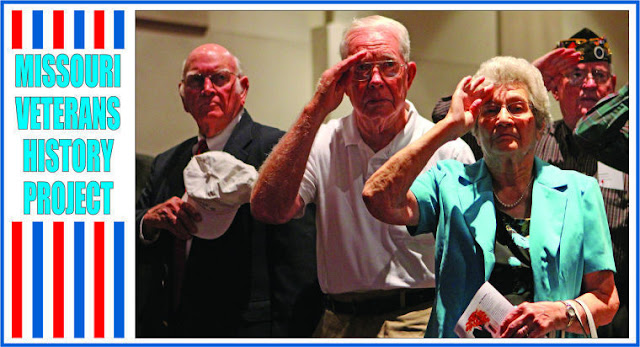 (WARRENSBURG, Mo.)—Former Congressman Ike Skelton spoke to a crowd of 200 people Thursday at a pre-Memorial Day program, "Honoring Our World War II Veterans," at Northside Christian Church. During the event, 47 World War II veterans were honored.
The veterans received a standing ovation when publicly recognized by Alex Slocum, commander of American Legion Post 131. The event was the final segment of a three-part University of Central Missouri Lifelong Learning series on “World War II in American Memory.”
During his speech, Skelton said he can still recall the prophetic words of his father who spoke to a class of Odessa High School students on Nov. 11, 1941.
The younger Skelton was sitting in the audience when he heard his dad, a Lexington attorney, talk about the sacrifices of the men and women who served in World War I. With great confidence, he told the Armistice Day gathering “there are heroes in the audience who may very well have to fight for their freedom again.”
He was right. On Dec. 7, 1941, Ike Skelton and his uncle were traveling in a vehicle to Lexington listening to the radio when they heard an announcer say the Japanese bombed Pearl Harbor. Among those sent to fight for their country were some of those individuals who had heard the father of the future U.S. Representative and chair of the powerful House Armed Services Committee speak only a few weeks earlier.
During his remarks, Skelton retraced the contributions of military personnel in the local area, recalling how he once saw a C-47 aircraft pulling a glider from the Sedalia Army Airfield, which prepared paratroopers to fight in the invasion of Normandy in 1944. That same airfield eventually became a part of Whiteman Air Force Base, which has a long history of serving the nation in capacities that have included being a missile wing and most recently, home of the B-2 Stealth Bomber.
Skelton also spoke about the individuals he knew personally who served in World War II, and the impact the war had on them and their families. The strong connection he developed with these individuals contributed to his desire to be a champion for causes that impact those who service in the military, including such efforts as working for improved education programs for service men and women, better health care for wounded and disabled soldiers, and efforts to provide essential equipment needed for those who are currently serving.
His interest in the nation’s military continues today through his presidential appointment to the American Battle Monuments Commission. This group manages 25 overseas military cemeteries, and 25 memorials, monuments and markers to honor those who served in World War I and World War II.
Skelton believes the nation owes much gratitude to those who fought for their country. Looking at the veterans, he said, “Let me tell you what you have done – the crusade in which you have served will long be remembered, and written in the history books as no other fight for freedom known to man. You should be proud of that, and every American should be proud.”
“So many of you are very humble and don’t wish to talk about it,” he added, “but wherever you were, whether it was overseas in Europe or right here in America, you did something that no other countryman could or will do again.”
Additional remarks were provided by UCM President Charles Ambrose, and Brig. Gen. Scott Vander Hamm, commander of the 509th Bomb Wing at Whiteman Air Force Base.

Participants in the event included the UCM Department of Military Science and Leadership, Matthews-Crawford Post 131 of The American Legion, William A. Carleton Post 2513 of the VFW, and Missouri Veterans Home, all of Warrensburg. 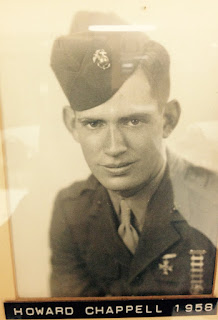 Major J.C. Sutton, who served his country honorably for 21 years, was a member of the 1939 and 1940 UCM basketball teams. Photo courtesy Sutton family.
Sutton is remembered for loving his country and his family
Posted by: Joey McWilliams in Men's Basketball, OSN Content, Top News May 30, 2016 0 Comments 32 Views
We all just called him Bubby.
It’s a fun name given to him by his first great-granddaughter, Jacey. A fitting name for someone as kind and as fun to be around as J.C. Sutton was.
Maybe even a name at all is good for someone who went for a long period of his life with just initials.
His given name when he was born on Oct. 15, 1918, was simply “J.C.”
That wouldn’t really suffice for the armed forces, and they gave him the name “Joe”.
Sutton joined the Army National Guard upon guidance from his high school superintendent in 1937. While in the Guard, he attended college at Central Missouri State Teachers College (now University of Central Missouri) and was on the basketball team.
During his two-season stint with the Mules, CMS made trips to the NAIA national tournament. The Mules had won the first two NAIA national titles in ’37 and ’38. In ’39, the team on which Sutton played made it to the Elite Eight and in ’40, his team earned a berth, but made it only to the first round.
But wartime circumstances would curtail any further athletic opportunities for Sutton.
He was a member of the 38th Division, 149th Infantry Hq. Co, Company C. He had been trained to be an officer and commanded that unit for the duration of World War II.
Sutton’s division was sent to Hawaii and then his company was sent to the Philippines. He spent his time during WWII fighting in the Pacific Theater. And the 38th was known as the “Avengers of Bataan.”

Photo courtesy Sutton family.
He would serve in the Leyte Gulf, Luzon, Bataan and Corregidor. And he would get a real taste of war even on his way, as his transport ship was hit by a kamikaze attack.
Sutton had gotten married to Vivian Anderson just prior to being deployed and his first daughter, Dian, was born in 1942 while he was oversees.
His unit also went to Ipo Dam, where Sutton had a Japanese general and about 120 troops to surrender.
The fighting was almost all on the ground. There were artillery and hand grenades and much hand-to-hand combat.
For his service during the War, Sutton was recognized with the Asiatic Pacific Service Medal, the Combat Infantry Badge and the Philippine Liberation Service Medal. He also received the Bronze Star Medal, given for heroic achievement, heroic service, meritorious achievement, or meritorious service in a combat zone.
He returned home to a reorganized 35th Division of the Guard in Warrensburg. Mo., and was made commander of Hq. Co. in 1947. His second daughter, Janice, was born in December 1947.
Sutton retired honorably in 1969, as a major who had served 21 years with distinction.
With new opportunities ahead and a tinkerer at heart – he loved to fix things – he studied to become an electrician and open Sutton Electric in Warrensburg.
He served as a deacon at the First Christian Church and loved to fish and hunt and play golf.
J.C. and Vivian were married for 67 years and had two daughters, five grandchildren and 14 great-grandchildren.
One of those grandchildren, Jodi, is my wife of 22 years and we are responsible for five of the great-grandchildren.
I wasn’t his grandson by birth, but he treated me as though I was.
One of my favorite memories of broadcasting sports was a trip to Warrensburg to cover the 2007 Division II Central Region basketball tournament, hosted by Central Missouri. As a color analyst for Southeastern, I was there for three games.
Bubby came to up to the UCM Multipurpose Building to see me call the regional final between the Mules and the Savage Storm. He spoke to all of his friends that were around – and there was a sea of red in a packed-out facility – about his grandson and what I was doing as a part of the game.
I don’t know who was more proud – Bubby, of me for my broadcast, or me, that he would call me his grandson.
J.C. Sutton loved and served his country with honor and distinction and he loved and served his family strength and pride. He went to be with the Lord on Dec. 28, 2009.
The name Sutton is still spoken around Warrensburg and Johnson County, Mo., with respect and fondness.
And the name Bubby will always be spoken of with love.
WW II veterans receive recognition

Gen. Paul W. Tibbets IV, commander, 509th Bomb Wing, Whiteman Air Force Base, provided a medallion to each of the veterans while Jeff Huffman and Delilah Nichols from the University of Central Missouri Military and Veterans Success Center provided a mini biography of each person’s service.

The following are comments about each World War II veteran at the ceremony…
• Hubert Jones, 17, enlisted in the Navy on Dec. 8, 1941. He became the first Johnson Countian to enlist and went on to become a corpsman. He served in 1945 on the USS Geneva near the Marshall Islands.
• Dorothy Brownfield, 19, volunteered with the Navy after college and served her country on the mainland during the war.
• Howard Chappell, 17, a Marine volunteer, engaged in hand-to-hand combat on Iwo Jima, being awarded a Purple Heart and recuperated in a hospital when the war ended.
• Clarence Hager, 18, an Army draftee, served as a rifleman and as a tank knockout, being wounded during the Battle of the Bulge and ended the war hospitalized in England.
• Paul Mitsdarffer, 19, an Army draftee, a tank driver, fought in the Battle of the Bulge.
• Virgil “Wayne” Shivers, 18, an Army draftee, served with an anti-tank unit in several European countries and after Germany surrendered in May, sailed to the Pacific, where the war ended in August.
• Earl Uhler, 20, piloted C46 and C47 aircraft for the Army Air Corps during the China, Burma, India campaign, logging more than 5,000 flying hours.
• Joe Ewing, 18, an Army draftee, served as a motor pool sergeant in France and Germany.
• Marvin Neal, 17, an ammunition specialist with the Army Air Corps, served on Okinawa.
• Merle Case, 18, a Marine draftee, served in communications on Okinawa and Ryuyku, and during the China occupation
• William Turnbow, 18, a Navy draftee, served about the USS Smalley, which served during the attacks on Honshu Island and sailed the waters off Okinawa.
• Eugene Fiedler, 18, an Army Air Corps draftee, served as a B-24 radio operator in the Pacific, and on a C46.
• Vilas Bielefeldt, in high school when the war ended, joined the Marines and then the Air Force, serving as a navigator on 55 missions and went on to become a pilot, flying 254 combat missions in Vietnam.
• Justyn Graham, 18, volunteered for the Navy in November 1945 and went on in 1950 to serve in Korea.
• Ed Woodrel, 18, served on a Navy attack transport vessel, the USS Bandera, with stops including the Caroline Islands
• Lloyd Duffer, 18, a Navy volunteer, served aboard transport ships in the Pacific.
• Glen Baile, 21, an Army Air Corps draftee, served in Naples and in Vienna.
• Oliver Doerflinger, 18, served on the USS New York, a battleship, as an aviation machinist mate and transferred to Hawaii where he worked on airplanes.
• Thomas King, 17, took the Navy training program at what is now UCM and served his country on the mainland during the war.
• John Morehead, 17, volunteered with the Navy and served his country on the mainland during the war.