From a gentleman who arrived in this city yesterday morning from Knob Noster, a (Sedalia) Democrat reporter learned the particulars of a shooting affray which occurred In that burg at 8:40 Monday night. This difficulty, like nearly all that have happened in Knob Noster for the past two year, occurred at a house of ill-fame which curses the town and demoralizes its youth.


Knob Noster the Scene of a Desperate Shooting: Affray.


Jeff Hornbuckle, a son of Judge W. L. Hornbuckle, of Warrensburg, accompanied by some chums, came down from Warrensburg, it is supposed to have a good time with the cyprians who have their abode in Knob Noster; at any rate they made it their business to call on them, at their house in the suburbs of the town. It appears that the Knob Noster boys were jealous of those of the "Sand Rock City,"(Quarry City-warrensburg) and did not like the way they had of running things. Young Hornbuckle had occasion to step out side the portals of the house of ill-fame, and while standing there, disturbing no one, two buggies drove up occupied by three or four young men. One of the parties drew a six shooter and fired five times on young Hornbuckle, The young man at once broke and run into town crying, "I'm shot!".


A stream of blood as large as a pipe stem was spurting from a wound in the side of his face. He was taken to a room at once and a surgeon was summoned. An examination proved that the wound in the head was a dangerous one that could not be probed. It was ascertained, however, that he had a still worse wound, which entered his side and the ball coursing downwards had entered his bowels. This wound, like the other, could not be probed. He was alive yesterday morning, but the physicians entertained little hope for his recovery. His father, who is judge of the Johnson County (MO) probate court, was telegraphed for, and arrived at the side of his wounded son a few hours after the shooting. The affair created the wildest excitement in the usually quiet town of Knob Noster.
The two young men who accompanied Hornbuckle to the house fled from the scene incontinently (without haste). About 10 o'clock last night four men were arrested as parties to the crime. It was generally understood, however, that a young man named George Campbell, a son of the late Dr. Campbell, did the shooting. All four were taken to a justice's office in the second story of a building, and placed under guard. Two of the four men were discharged, having given satisfactory evidence that they had nothing to do with the shooting. 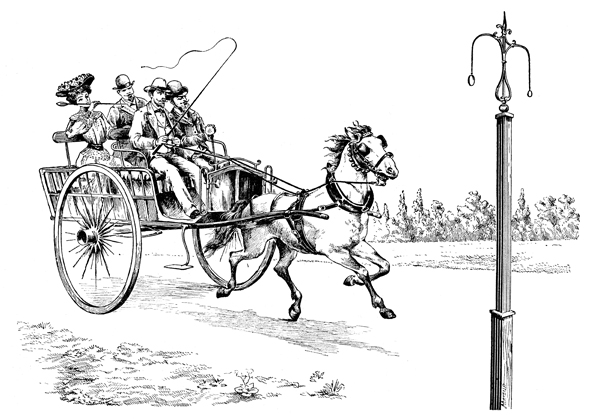 About 11 o'clock Campbell was observed to get up and go in direction of an open window in the rear of the building. The constable in charge of him fearing he intended to jump from the window, hollered to him to halt, but it did not stop him. By using his hands upon the window-sill, he leaped out of the window like a frog, alighting upon his right side of the edge of a platform beneath, causing a double compound fracture of tho right arm, he laid where he fell in an insensible condition until the officer picked him up. Here was more business for a surgeon, and Campbell's wounds are supposed to be nearly as bad as those of Hornbuckle.


The only wonder is that he did not kill himself outright, as he jumped from a great distance. The building from which he jumped is located on the side of a hill, the rear of it being on the lower side, making the distance he fell from twice as great as though he had jumped from the front, Campbell will be kept under guard until the result of Hornbuckle's wounds are known. There is a great deal of mystery surrounding the shooting, Hornbuckle and Campbell were fast friends, and had been together that evening. The theory is that Campbell and his companions who occupied the buggy, had called to take the girls of the house, who had recently come to Knob Noster from Holden, out riding, and that Campbell mistook Hornbuckle for somebody else, or that he was there to prevent the girls from going out, and opened fire on him.


The bullet which entered young Hornbuckle's side, and which it was found had penetrated his bowels, has been found and cut out. The bullet did not pass through the lining of the bowels, but ranged down and lodged between the skin and lining. The wound in the head is a very dangerous one and his head has swollen to nearly twice its natural size. Both of the injured men are constantly attended by physicians.
From the Sedalia Democrat.


NOTES Jeff must have survived for many years after getting shot.