James Lester Prouty, b. Nov. 13, 1851. James, was burned to death at the age of twenty-two years while on his way to attend the Normal School he perished in the fire which destroyed Mings Hotel, Nov., 1873. 4 people died. Warrensburg Missouri, 101 South Holden Street. 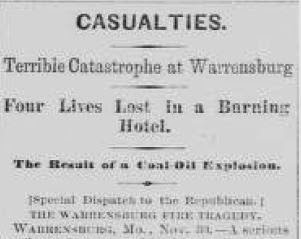 
Warrensburg, Mo., Nov. 13, A serious conflagration occurred in this city last night, commencing at '9 o'clock, and burning the Mings Hotel and two brick buildings belonging to H. F. Clark, and the Johnson County Savings bank. The fire originated in the lamp room of the hotel, from the explosion of a coal-oil lamp, and soon the flames enveloped the whole building. Sad to relate it was the fire devils preying upon human bodies. Three bodies were taken from the burning embers last night. Another body is missing. 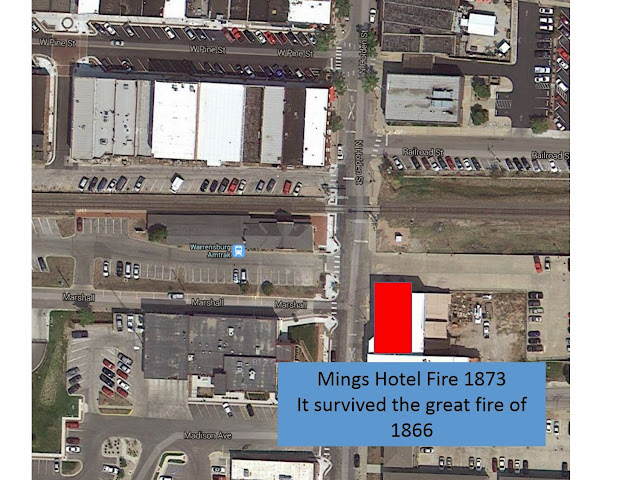 THE DEAD - M. E. MULVEHILL. The deaths and losses are summed up as follows: M. E. Mulvehill, proprietor of the hotel, was sitting in the hotel office at the time of the fire and at the alarm of fire hastened to the scene, and in making his exit was smothered or choked to death by the smoke and flames. His body was taken from the debris charred and crisped at 1 o'clock A. M. It was found in the ruins of the hotel office.


J. W. POLAND. The next body recovered was that of J. W. Poland, an artist from Kansas City. His body was found in the debris of the hotel saloon. The unfortunate man occupied a room over the saloon.


J. L. PROUTY. J. L. Prouty of Clintonville, Mo. .arrived on the evening train with the intention of joining the Normal school. A few bones of his remains only were found. Another guest of the hotel is missing.


LOUIS ROISTER. On the register appears the name of Louis Roister, Sedalia, Mo. This body is supposed to have been completely burned, as no trace can be found.


BADLY INJURED. Allen Durmeit, the steward of the hotel, is badly burned and scarred, and hopes of his recovery doubtful . Thos. Higgius, stone cutter, received a broken ankle and burned face while escaping. Geo. Crone, the clerk, was internally injured by inhaling fire.

NARROW ESCAPE. Other inmates of the house barely escaped with their lives, many jumping from the second and third stories of the building and sustaining slight injuries.


THE BURNED BUILDINGS. The hotel building was constructed of pine, and was built in the spring of 1865. The building was soon consigned to the flames. It was insured for contents for $4,000. Tho adjoining building, belonging to H. F. Clark, and the Johnson County Savings bank were totally burned. Clark's building was insured for 3,700, the saloon contents for 1,500. The bank building was insured for 1,000. The books and papers in the safe are saved. Tho hotel barber-shop was an almost total loss. Peter Kuitz, tailor, was insured for 500, Ruthraff, jeweller, saved his entire stock. Considerable money was deposited in the hotel safe, which was taken from the debris this morning in a good condition. Great exertion was made to save the contiguous building and fortunately the wind favored. Even tho stable buildings of wood were saved from the scorching elements. 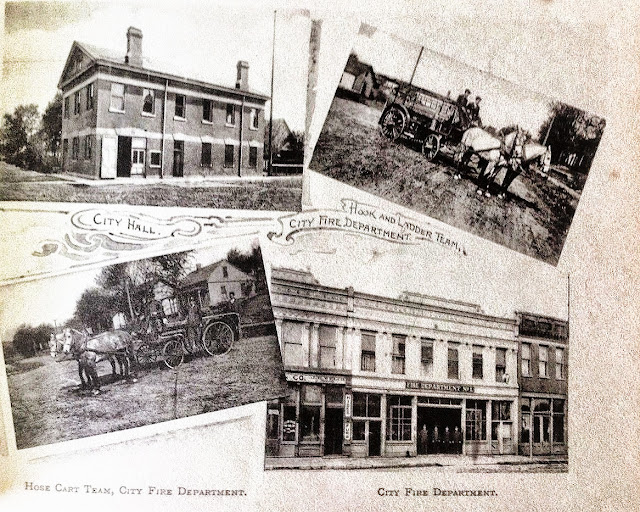 
There is a chapter of fires in this prosperous town. The town has been burned and built again, but this last calamity is the most appalling one in its brief history. There, is a deep gloom cast over us this bright Sunday morning. It is the charred remains of the unfortunates who perished as if by magic. A coroner's inquest is now being held.


Of other losses we mention J. M. Shepherd, lawyer, books and papers; Griggs and Cress, dentists' materials, W. P. Ashbury, justice of the peace, books and papers, D. W. Reed and G. Will Houts, books and papers. They occupied rooms over the bank. These statements are briefly and correctly detailed and we shall apprise you of further particulars.


Of the many citizens who diligently labored to prevent the progress of the devouring elements we make especial mention of Jas. D. Morris. He was the first one to rescue the charred bodies from the fire, and while it was raging did his work nobly and heroically.