Promise of Marriage to Eve Vernaz and her Suitor Backs Out! 1885 Warrensburg, Missou 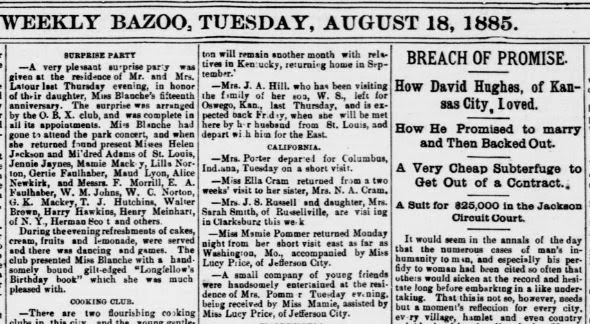 How David Hughes, of Kansas City, loved, How He Promised to marry and Then Backed Out.
A Very Cheap Subterfuge to Get Out of a Contract. A Suit for $25,000 in the Jackson Circuit Court.


It would seem in the annals of the day that the numerous cases of man's inhumanity to woman, "and especially his perfidy to woman had been cited so often that others would sicken at the record and hesitate long before embarking in a like undertaking. That this is not so, however, needs but a moment's reflection for every city, every village, hamlet and even country neighborhood has its dire deeds. Here it is a murder, there it is a rape, yonder a seduction and everywhere the trail of the serpent. In no instance can the perpetrator of these deeds of darkness hope to escape


punishment, for like Nemesis, it is ever awake and ever ready to chime vengeance. Now and then a heart is broken and a life wrecked by the false promises of some gallant who has found to being delightful that he has proposed marriage with no very clear idea of coming to the scratch, and who, when he can no longer postpone his marriage, resorts to some cowardly trick to evade it. Who shall in such a case, then, blame the deserted and wronged victim if she should seek redress at the hands of the law? Not many, for
although a trying position to a delicate girl, yet there is a stern justice in making those who dance pay the fiddler. A recent case of this kind hails from Warrensburg, and is as follows:
There resides in the suburbs of Warrensburg, the county seat of Johnson county, Pierre Vernaz. The family consists of father, mother, three daughters and two sons. They obtain a livelihood by raising "grapes and other fruits and making wine. They are natives of France, and are honest, upright, frugal and good citizens. The children, while they are well educated in the English language, speak French fluently. A few evenings since a Bazoo representative by chance, dropped into the humble home and passed an hour under their roof.
The parents speak English quite imperfectly, but the genuine gentility and well known hospitality which is characteristic of all Gauis was very prominent toward
their stranger guest. The eldest child of the family is a
daughter named Eve. She is 24 years old. She possesses a fine form, bright, sparkling eyes, and an expressive and intelligent countenance. She is endowed with a large amount of native shrewdness, and although unaccustomed to the ways of the world, she has a knowledge of books, and
also being a close observer of the public press, she is not readily deceived. During the stay of the representative of the press, Miss Eve and her sister Mary, treated him to some choice instrumental and vocal music, they both being fine performers on the guitar. They sing the Marseilles hymn the national song of France in the French language. It was artistically rendered, and charming in the extreme.


David Hughes is of the firm of Hughes &


Dogan, doing business at Twenty-Fourth Jefferson and Summit streets. Kansas City they manage a stone yard, that is they purchase the famous Warrensburg stone in the rough, and mold and curve it to suit their customers in the city of the hills, and it is currently reported that they have made a fortune at the business. Being in the stone business it brought Mr. Hughes to Warrensburg quite often He was a customer of Mr. Wm. Bruce, who owns and conducts one of the largest quarries at that place. Periodically Hughes and Bruce would call at the Vernaz place, and it was on one of these occasions that Bruce, who was and still is a warm friend of the Vernaz family, introduced Hughes to Miss Eve. This was some fire or six years ago. Since that time Hughes has been a regular caller at the home of Miss Vernaz. David Hughes was a married man, possessing a wife and one daughter of tender year. Mrs. Hughes died three years ago. 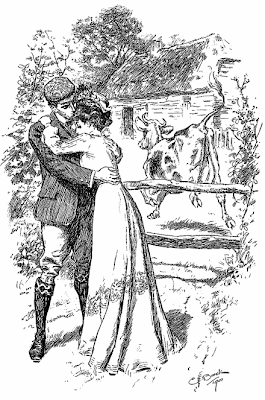 After Hughes' wife died his visits became more frequent and more lengthy. Often did he accept the hospitality of the humble family, who always vied with each other in making his stay pleasant. It was Saturday night, June 27, 1835. It
was late in the night, there came a rap at the door which is usually entered by those who come on business. The party was on business and he pounded at this door. It was the custom of the family to pay no attention to those who knocked after ten o'clock at night, unless it was an intimate friend's knock. So in this case. The party then rapped at the parlor door. Miss Eve Vernz heard this and interrogated the caller, "Who is there?" "Frenchman," was all the reply she received. Miss Eve recognized the voice as that of her lover, David Hughes. The young lady called her father who went to the door and invited him in.

SHE COULD NOT SLEEP.


The young lady still kept her bed, but could hear Hughes and her father talking. He said to Mr. Vernaz: "I have come to marry one of your daughters" "I could not sleep and got up and went into the store where father and Hughes were," said the young lady to the reporter. "Your not being able to slumber when such a conversation was in progress was not


surprising, was it? interrogated the reporter. "I wish I had remained away," she replied, and continued to follow the thread of her story. That night Hughes proposed to marry
the young lady. He told her that his thoughts had been in that direction a long time and now he made normal proposition for her hand in marriage. If was early Sunday morning that the proposition was made. Very wisely did the young lady decline to give Hughes a hasty answer, although he pressed her for a favorable reply. "it was too sudden Miss Vernaz told Hughes that he must wait until the parents and family could be consulted. "During Sunday I finally consented to become his wife, and a sorry consent it proved to be," said the young girl, who was being interviewed.
FRESH PROSPECTIVE SON-IN-LAW.
On Monday, June 29, Hughes and Miss Vernaz prepared to go to the county recorder and secure the license. Just before starting Hughes said to Mrs. Vernaz: ''Mamma, suppose we should marry before our return from town ?"
"Oh, No!" spoke up Miss Eve, "I will not be married from under my father's roof," she continued emphatically. No! No! No!" said the prospective mother-in-law, "Eve must be married at home."
The license was secured of G. W. Patton, the recorder, Miss Mary Vernaz, Eve's sister, accompanying the couple to town. Hughes told Miss Eve a doleful tale of his situation how lonely he was that his sister was keeping house for him, but that it did not suit him he wanted a wife at the head of his household and to that end  urged this as a reason for a hasty marriage.  Miss Vernaz objected and proposed that the wedding should be deferred until autumn This did not suit and finally Saturday, July 4th, was selected as the time for the wedding, to which he agreed and seemed pleased that the time was no farther away than it was. That Monday night, June 29th, he returned to Kansas City.


"Kansas City, July 1. Dear Eve: I reached home all safely but my sisters are not satisfied the way I did, however, but it is too late now. I can't get Father Dalton to come down ; so you will have to get your own minister. You had better make preparations to come up to Kansas City along with me and we can board for some time. So you see I am in hot water all around. Well, good-bye. with my best love to you and all the family. From your affection and ever loving David Hughes."


Hughes comes with his lip down.


Hughes returned to Warrensburg July 23, on the night train. He came directly to our house. He came with a long face


and said he was sick. He said his sister came to Warrensburg with him and was at the Tyler house.
The children of the Vernaz family made sport of his being sick, but he hung his lip to such an extent that his illness assumed a serious aspect, and they contemplated sending for a physician.  Later he elevated his under lip enough to
tell Miss Eve that he had a fearful and obnoxious disease, and could not marry her. This was about midnight previous to the day of their appointed wedding. He told Miss Eve that he would not marry her for millions, as he had seen too much of the world and its vices, and he would not wreck her life by marrying her, which, no doubt was only a subterfuge and an excuse to break his solemn promise of plighted love to a heart and a one that had learned to love him.
HUGHES' MOVEMENTS
David Hughes and William Braes registered at the Eads House that night and occupied the same room. The early train going west the morning of the Fourth, took Hughes and his sister to Kansas City. He told Bruce that he was afraid to stay there any longer he feared something, nobody knows what, but the trite adage that "the wicked flee when no man pursueth" fits his case. This the last that he Vernaz family have heard from David Hughes.
SUIT FOR damages. Miss Eve Vernaz by her attorney. S P Sparks, has commenced a suit in the Jackson county circuit court against David Hughes, laying her damages at $25,000, which case will be called in September. It is to be hoped that the young lady will win the case, thereby teaching the say deceiver a lesson in dollars and cents that he cannot trifle and betray without snarling under the lash of public indignation, and before a proper tribunal.
Simply Sipping.
They were meandering up and down Ohio street last evening, utterly oblivious of the fact that they were the observed of all observers. And why should they care?  Were they not enjoying the quintessence of loves young dream and sipping the cup which bubbled to the brim with nectar sweeter far than ever tasted by gods in the revels on Olympus ? A Bazoo youth espied them and in a manner far from poetic or sentimental, but chuck full of business, drew nigh and said "Mister, are you just married?"


The fair siren, who was clinging her mister's arm, blushed like the water who turned to wine. "No," was the hesitating reply, "Come, now, own up. you act like it," was the brusque demand of the youth. "Well, I'll tell you. We are not married
but we will be next Monday afternoon if we can find & preacher or a squire." Where?" "At Paris, ill "Where are you from?" Higginsville."

"What are your names?" "Mine is Henry West and this young lady is Miss Maggie Matthews."  Flushed with the success of this, his first reportorial work, the youth gave fleet new to his feet and was soon in the Back sanctum, where he detailed his interview with the gusto of a bombastic furioso. The Bazoo trusts that Henry and Maggie's sipping may merge into delicious tasting of marital sweets.