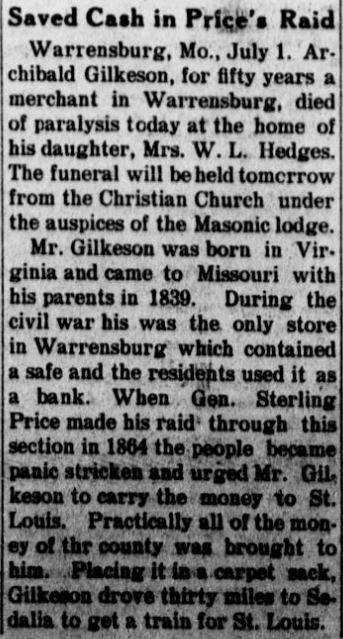 
Warrensburg, Mo., July 1, 1911 Archibald Gilkeson, for fifty years a merchant in Warrensburg, died of paralysis today at the home of his daughter, Mrs. W. L. Hedges. The funeral will be held tomorrow from the Christian Church under the auspices of the Masonic lodge. Mr. Gilkeson was born in Virginia and came to Missouri with his parents in 1839.

During the Civil War Gilkeson's was the only store in Warrensburg which contained a safe and the residents used it as a bank.
When General Sterling Price made his raid through this section in 1864 the people came to him panic-stricken and urged him to carry their money to St. Louis. Placing it in a carpet sack Gilkeson drove (rode) thirty miles to Sedalia to catch a train to St. Louis.

Approximate route of Gen. Sterling Price's 1864 Raid is marked in red. The green route to St. Louis represents possible route of Joe Shelby's scouts that rode into the suburbs of St. Louis. Reportedly four members of the Shelby's command captured the Cheltenham Post telegraph office which is now located within the city limits of St. Louis (6437 Manchester road). The large blue dot marks the location of Ft. Davidson (at Pilot Knob) where battle took place. The large green dot near Kansas City is the site of the Battle of Westport. Above map taken from "A History of Missouri", by Eugene Morrow Violette, 1918.

JEFFERSON CITY — News that Maj. Gen. Sterling Price was marching the Missouri State Guard from Warrensburg to Lexington sparked a flurry of panicky messages between Col. Jefferson C. Davis and Maj. Gen. John Fremont. Davis, the commander of the Union garrison at the capital, and Fremont, the commander of the Western Department, had scattered their forces in detachments of 1,000 to 2,000 men in an effort to chase down the small commands of Col. Martin Green, Brig. Gen. Thomas Harris and Col. Robert S. Bevier.Col. James Mulligan of the 23rd Illinois Infantry, known as the Irish Brigade, was in command at Lexington with about 3,500 soldiers that also included contingents from Missouri, Kansas and Iowa. Davis had about 3,400 Union soldiers and almost 1,400 poorly armed and trained Home Guard troops on hand to counter any thrust at the capital. Davis also reported that Maj. Joseph Eppstein, commander of the Home Guards at Boonville, was seeking reinforcements in anticipation of an attack.Since defeating the Union forces under Brig. Gen. Nathaniel Lyon on Aug. 10, 1861, at Wilson’s Creek near Springfield, Price had been steadily moving northward, clearing southwest Missouri of Federal troops. With an army of about 12,000 men, Price had sought to capture Mulligan at Warrensburg when the Union officer seized the gold at the Union Bank branch. Price had arrived the day before at Warrensburg to find out he was too late. “An unusually violent storm delayed our march the next morning until about 10 o’clock,” Price wrote in a report to fugitive Gov. Claiborne Fox Jackson. “We then pushed forward rapidly, stil1 hoping to overtake the enemy. Finding it impossible to do this with my infantry, I again ordered a detachment to move forward, and placing myself at their head, continued the pursuit to within two-and-a-half miles of Lexington, when, having learned that the enemy were already within town, and it being late and my men fatigued by a forced march and utterly without provisions, I halted for the night.”Mulligan reported early in the day that he expected to be able to hold Lexington for the time being but needed help. “Strengthen us; we will require it,” he had written.Davis asked for information on the movements of Brig. Gen. John Pope, commander of the District of North Missouri, who was in the field chasing state troops out of Central Missouri.Problems in Callaway County and south of Jefferson City “are being vigorously straightened out by some detachments I sent out some days ago,” Davis reported
Price's Last Missouri Raid

Gen. Price's raid on Missouri in fall of 1864 caused considerable panic to the Federals within the State. Over 6,000 troops had to be recalled from the looting/burning of Georgia to pursue Gen. Price's 12,000 man cavalry force threatening St. Louis. After leaving Doniphan Missouri on Sept. 20, 1864, Price moved against the Federals in Ft. Davidson at Pilot Knob in hope of capturing vitally needed guns and ammunition for his men. Due to the deep trench before the fortification at Ft. Davidson, Price lost from 800 to 1,000 men in his attempts to rush the fort. In preparation of attacking St. Louis, Price sent a squad of Shelby's cavalry to secure the Cheltenham Post/Telegraph office, which was then only four miles outside of the city. Due to a change of plans after entering Franklin County, Price ordered the attack on St. Louis aborted, and proceeded west to Jefferson City.

"Mr. C. W. Cord was a life long Christian. He joined that denomination when 17 years of age and continued his allegiance until his death. When he came to Warrensburg, The church at this place had become demoralized and its members scatters, during the civil war, he with the help of A.H. Gilkeson, J. P. Wroshaw and others reorganized the church, and were largely instrumental in placing this denomination in it present prominent position among the churches of Warrensburg." 1900 Newspaper Obituary. 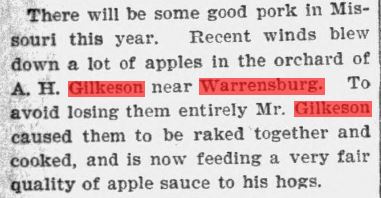 Gilkeson Home
In the 1870s, a large brick Gothic Revival home was built by the Archibald Gilkeson family at 307 West Gay, near the Griebel House at 300 West Gay.
The Drawing Room LLC bought the house 3 weeks earliers.

By STEVE GANEY
Photos submitted by SHARON MILLER
(WARRENSBURG, Mo., digitalBURG) — Warrensburg lost a little piece of history on Wednesday. A house built just after the Civil War located in the old town of Warrensburg was demolished.
The house, at 307 Gay St., was built in the 1870s by a Warrensburg merchant named Archibald Gilkesson. Lisa Irle, curator of the Johnson County Historical Society, said Gilkesson opened a general store in Warrensburg in 1856, and built the house some time in the 1870s, but the actual year is uncertain.
Another notable resident of the house was Carrie Nation, the radical activist in the temperance movement of the early 1900s known for destroying barrels of alcohol with a hatchet. Nation had attended the Normal Institute in Warrensburg to earn a teaching degree in the 1870s and lived in the house some time later. Irle said the exact dates when Nation stayed there are unclear.
In the last few decades, the house had been converted to apartments and rented out. In recent years, the house laid vacant, fell into disrepair and eventually went into foreclosure.
“That house has been a topic of conversation over the years,” Irle said. “It’s sad, but sometimes they just get to the point where you can’t save them.”
Next door neighbors Sharon and Don Miller said they were sorry to see it go. The Millers have lived in the property next to the historic house since 1968.
“It’s very sad. It’s part of the original Warrensburg,” Sharon Miller said. “Especially because five years ago, that house could have been restored.”
The Drawing Room LLC, a local Warrensburg entity, bought the property three weeks ago. Wendell Davis, a member of the Drawing Room LLC, said he inspected the home and had a cost analysis to see what it would take to restore the home.
“We were looking at $275,000 to $300,000. For that property, it just was not economically feasible,” Davis said. “We did not want to tear it down. I’m a big history buff and my wife cried a little. We’re sorry to see it go, but it’s what we had to do.”
Davis said he plans to build another house on the land, hopefully beginning construction before the spring but it depends on the weather.
“We’re going to put up something nice. Nothing dumpty,” Davis said. “We thought about building a duplex and renting it out, but we’re pretty settled on building a nice home there for somebody. I’ve been taking a look around, and we’re trying to get something that blends with the look of the neighborhood.” 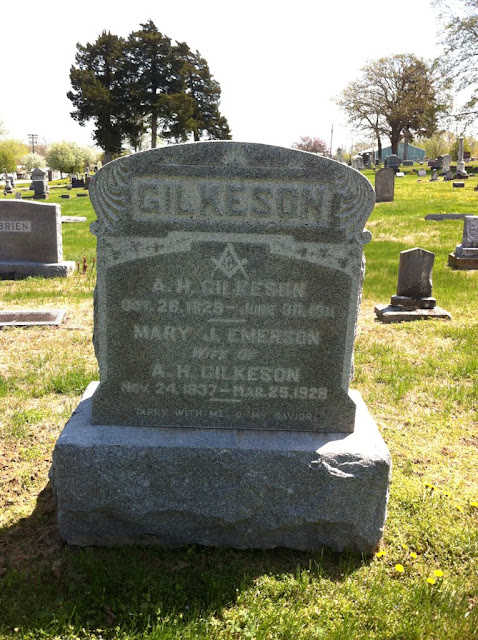