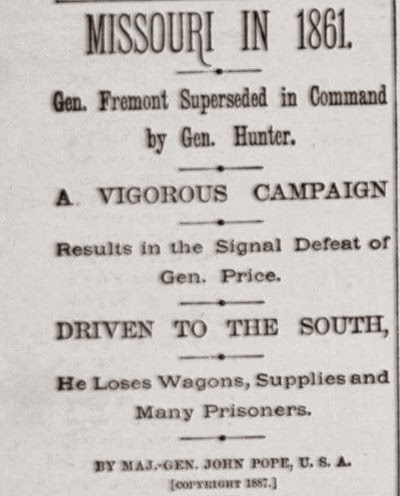 The National tribune., March 10, 1887  - Missouri in 1861 story
On the 15th of December, having left a sufficient garrison at Sedalia, I marched from that place with a force of infantry, cavalry, and artillery, numbering between 3,000 and 4,000 men, and divided into two brigades, commanded respectively by Col. Jeff C. Davis


and Col. F. Steele, both officers of the Regular Army holding volunteer commissions as Colonel. The object of this movement was to interpose between Price's army on the 0sage at Osceola and a large body of recruits, reported to be about 6,000 strong, moving south to join him from the Missouri River at Lexington and Arrow Rock and having with them a large train of supplies for his army.

Leaving Sedalia by the road to Warsaw, merely to mislead the enemy for that night, I encamped on the main road thereto about sunset Four companies of cavalry were thrown forward to observe any movements of the enemy from Osceola, and next morning I made a forced march of 25 miles, and at sunset occupied a position between the direct road from "Warrensburg to Osceola and the route via Chilhowee to the west. It was this latter road that the recruits and returning soldiers of Price pursued in joining his forces. Shortly after sunset the advance, consisting of four companies of the 1st Iowa Cav., under Maj. Florence,

CAPTURED THE ENEMY'S PICKETS
at Chilhowee, and learned that he was encamped in considerable strength about six miles north of the town. After resting horses and men for a couple of hours, I threw forward 10 companies of cavalry and a section of artillery under Lieut-Col. Brown, of Missouri, to assault the camp, and followed with my whole force, posting the main body between "Warrensburg and Rose Hill, to support his movement I at the same time reinforced Maj. Hubbard on the direct road to Osceola with several companies of Merrill's regiment of cavalry, and directed him, in order to cover our flank in the movement on Chilhowee, to push vigorously as far as he was able to the enemy's lines north of the Osage at Osceola. He executed these orders with great vigor and skill, driving back and capturing the enemy's pickets and one entire company of his cavalry, with its tents, baggage and wagons. The forces encamped at Chilhowee received hurried notice of Brown's advance and broke up in a panic, scattering in every direction, in parties great and small Brown followed in pursuit all night of the 16th and all day of the 17th, and about midnight reached Johnstown. The enemy scattered in every direction, and as they themselves and their two-horse wagons belonged to the country, the troops could not identify those living quietly at their homes and those en route to Price's army. "When the pursuit reached Johnstown, about midnight, the enemy had

COMPLETELY MELTED AWAY.
The main body of our troops moved slowly north in the direction of "Warrensburg, waiting for Brown to return. He scoured the whole country within reach of Johnstown, and brought in 150 prisoners and 16 wagons loaded with tents and supplies. Next morning, the 18th, Col. Brown rejoined the main body. As I knew that the force he had dispersed was not the party he intended to intercept, which must still be north of us, I moved slowly toward 'Warrensburg, and when near that place the spies and scouts I had sent toward Lexington and Arrow Rock before leaving Sedalia returned and informed me that the large force we had expected was then on the march from those places, and would probably encamp that night at the mouth of Clear Creek, just south of Milford. I at once posted the main body of my command between Warrensburg and Knob Noster to close all outlet to the south between those two points, and instructed Col. Jeff C. Davis, with Seven companies of cavalry afterward reinforced by another company of cavalry and a section of artillery, to march rapidly on the town of Milford, so as to be in position to intercept the enemy's retreat toward the northeast, whilst Merrill's regiment of cavalry was to march also on Milford, approaching it from the northwest. The main body of my command was four miles south of Milford, and ready to prevent escape in that direction. At a late hour in the afternoon Col. Davis came up with the enemy encamped on the west side of the Blackwater opposite the mouth of Clear Creek. The Blackwater was deep and miry, and could only be crossed by
A LONG, NARROW BRIDGE,
which was guarded by the enemy in force. The troops under Col. Davis, led by two companies of the 4th U. S. Cav., commanded by Lieuts. Gordon and Amory, charged the bridge and carried it in handsome style, with the loss of one killed and eight wounded. They followed up the enemy with such force and vigor that, finding himself pressed in front and cut off from retreat in every direction, he surrendered at discretion. It was the first taste of real fighting that most of the troops had had, and too much cannot be said of their gallant conduct The enemy's force, as reported by its commander, consisted of three companies of cavalry and parts of two regiments of infantry, numbering in all 1,300 men. There were three Colonels, one Lieutenant-Colonel, one Major and 51 company officers. Five hundred horses and mules, 73 wagons loaded with powder, lead and other military stores, fell into our hands, as also a thousand stands of arms.
A number of the most influential, and therefore the most dangerous, Southern men in the State were captured with this party, and the effect of the expedition was extremely useful all over the State. "Within five days the infantry marched fully 100 miles and the cavalry nearly double that distance, and they swept the whole country south of Lexington as far as the Osage clear of all parties of the enemy. They captured nearly 1,500 prisoners a number of them the most important personages in the State from the Southern point of view; 1,200 stands of arms, and nearly 100 wagons loaded with supplies.