15 March 1853, Evening Star 1852-1907, Washington, District of Columbia
A company of Missouri gentlemen called recently on President (Franklin) Pierce. When Major N. B. Holden, formerly of the 12th infantry, and now of Johnston county, Missouri, was presented, the President exclaimed, "Major Holden? God bless you, Holden! a braver man never trod shoe leather. Holden, we were in a narrow road when we were last together. Come and see me, Holden; don't leave the city without coming to see me!" The Major was overwhelmed by such a handsome compliment; tears stood in his eyes, and his friends, who accompanied him, felt at least ten feet taller. The commendation was well deserved, for no braver man than Holden ever did live.


Warrensburg stared the Civil War in the face as both sides had large practicing military factions. Major Holden became a casualty of this country-wide crisis as he was assassinated in the middle of the night. His tombstone reads, “Assassinated at his residence, in Warrensburg, at 1:00 A.M.” 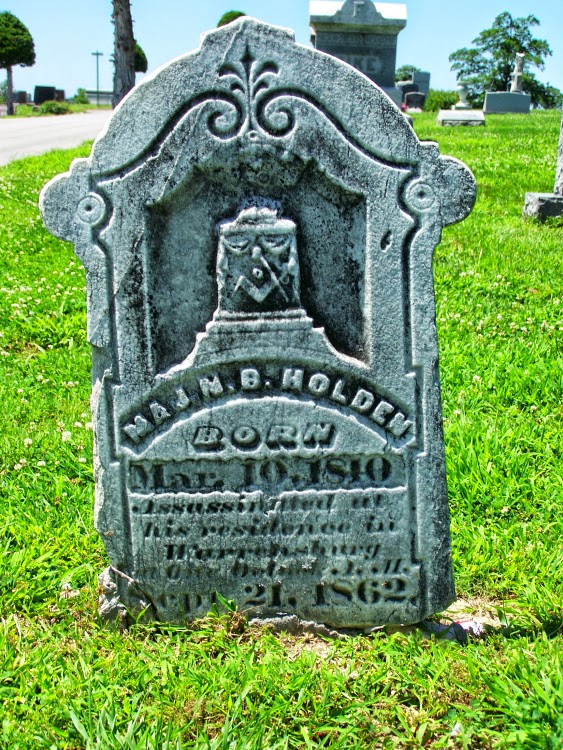 "Like thousands of other towns that developed west of the Missouri located in and around Union Pacific depots, Warrensburg formerly was part of the Missouri Pacific Railroad System. Organized in 1836, Warrensburg settlers came from Tennessee and Kentucky, including the town’s name sake, Martin Warren. Union Pacific in Missouri and its immediate predecessor Missouri Pacific Railroad, was one of the first railroads west of the Mississippi River, coming from a long line of predecessors and mergers that have added to the colorful history of present day Union Pacific. By the middle 1800s, prominent businessmen Colonel B.W. Grover and Major N.B. Holden against all odds, decided they wanted to bring a railroad branch through Warrensburg and were successful. Colonel Grover, also a Missouri State Senator, played a significant role when in 1849 the Pacific Railroad was granted a charter for a rail line to run between St. Louis, "... from any point on the main line of the Pacific Railroad east of the Osage River to any point on the western boundary of Missouri south of the Osage River (Missouri Legislature Act passed and approved Christmas Day, 1852)." The Pacific Railroad line was completed from Sedalia to Warrensburg on July 4, 1864"

"Official list of officers who marched with the army under the command of Major General Winfield Scott : from Puebla upon the city of Mexico, the seventh, eighth, ninth and tenth of August, one thousand eight hundred and forty-seven, and who were engaged in the battles of Mexico"

Brother - DANIEL MAXWELL HOLDEN (1859)
Daniel Maxwell Holden was born near Antwerp, New York, August 10, 1833, a son  of Zophar and Jerusha (Harrison) Holden. They became the parents of 11  children all of whom are now deceased.
At 16 years of age, Daniel went to Missouri, joining his older brother Major  Nathaniel Holden. Afterward he attended the academy at Warrensburg, and was employed in the U. S. Land Office under his brother.
In 1859, buying up a herd of cattle and horses, he came to Colorado via the  Arkansas route and located on Cherry Creek, now within the city limits of Denver. Arriving there on the 13th of July 1859 he at once embarked in the dairy business, and later located a ranch in Bijou basin, El Paso County, on the Elbert County line near what is now Peyton.
It was his custom for several years to return to Missouri every fall and buy cattle and horses, which he would drive to Colorado. Several times Indians threatened to attack him on his ranch, but he never had an encounter with them. His ranch comprised about 1500 acres and had many springs, besides the additional advantage which irrigation gives. A natural shelter for the stock was afforded by the bluffs and pine trees formed in abundance on the place. He made a specialty of raising graded shorthorns, in which he met with success.  At Franktown, Douglas County, on November 9, 1864, Mr. Holden married Miss Isabel Hayden, who was born in Elkhart, Indiana, a daughter of Lewis Hayden. To this union were born six children: Lawrence, a stock man in Elbert County, near Ramah; Zophar, engaged in the stock business near Calhan; Mrs. Edna Mathis of Monument; Mrs. Olive Jennings of Manhattan, Kansas; and Erma and J. D., who are with their mother. Mr. Holden died August 12, 1896, after a brief illness. He was a member of the El Paso County Pioneers and of the Association of The Colorado Pioneers.