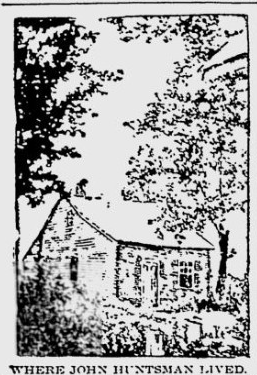 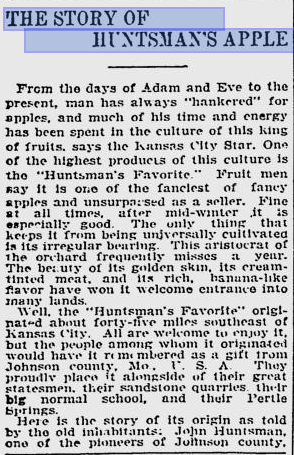 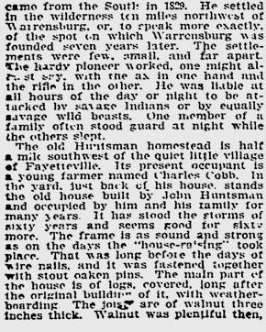 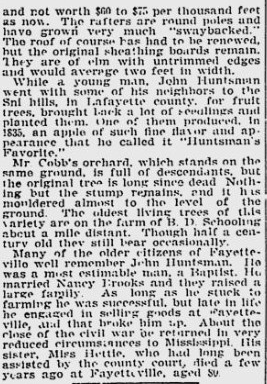 
"The Huntsman Favorite apple originated here on the old Huntsman farm about one mile west of Fayetteville in 1835. 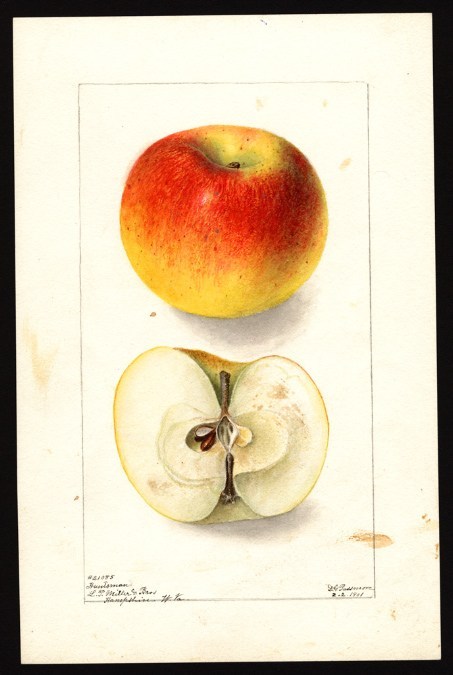 Huntsman Apple
The following incident is related in regard to getting the scions: "At that time the old settlers often went to Lexington to the mill, and would stop at nurseries and orchards in Lafayette county and dig up seedling sprouts to plant. The following old settlers went to the Sni country, on Sni creek, to get young apple trees: Richard Huntsman, Joseph Hobson, Wm. Trapp, Robt. Graham, James Borthick, George McMahan, and Wm. McMahan. The distance was about forty-five miles away. 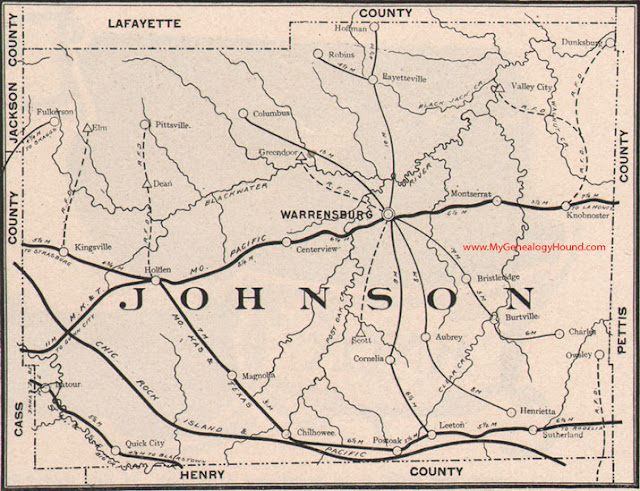 They returned with a large lot of scions and from the bunch of sprouts put out by Richard Huntsman came the huntsman Favorite apple, so highly prized in our orchards of today. Uncle Joe Harrison, as he was called, said he was too old to plant trees, when invited to go to John Ingram's nursery, in the Sni Hills, for trees. Many of these men lived to enjoy the "fruit" of their labors, and Uncle Joe Harrison outlived the greater part of them and to eat apples from Judge Wm. McMahan's orchard, which grew from the scions of the "old famous Hunstman tree" in Richard Huntsman's orchard."


In March 1831. there were about fifteen heads of families in the county. The following is a list, given by Judge Harvey Harrison to Mr. Crissey in 1889: "There were at this time but about fifteen heads of families in the (Johnson) county and they were named as follow: Nicholas Houx, at Columbus; Pleasant Rice, southeast of Columbus; Richard Bradley, Uriel Murray, Richard Huntsman, father of John Huntsman, of Huntsman's favorite apple fame. Dr. Rankin. Robert King.


Why you should be excited:
Huntsman's Favorite is an apple from the American Midwest, known for good eating and productiveness.


The story of Huntsman's Favorite:


It must have been exciting back in the day to plant an apple orchard from seed, having no idea whether any of your trees -- each bringing a new variety to the world -- would produce palatable apples.


Of course, it would be a slow-paced excitement, as it could take a decade or more before you'd eat your first apple from this new orchard.


After the wait, it'd be extra exciting when one or more varieties turned out to be of good quality.
That's what happened to John Huntsman of Missouri, who grew this apple, which didn't just prove to have good eating qualities; it also grew on a highly productive tree. A huge bonus, to be sure.
Never having gained fame beyond Missouri and Kansas, Huntsman's Favorite disappeared from widespread planting sometime before 1900.
Huntsman's Favorite Facts
Its origins:
Raised from seed in Fayetteville, Missouri, USA, about 1850.
Flavour, aroma, texture:
Expect aromatic qualities and subacid flavor from the juicy, yellow flesh of this apple.
Appearance:
A yellow apple that's large and roundish, occasionally with an orangish blush and/or some russet.
When they’re available:
Mid-season (usually in early October).
Quality for fresh eating:
Very good.
Quality for cooking:
Mainly used for fresh eating.
Keeping ability:
Good (2 or 3 months when kept refrigerated). 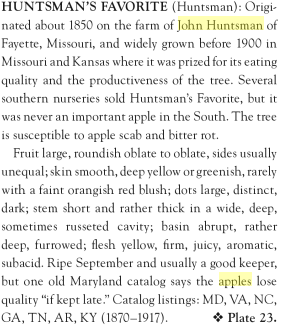 Huntsman's Favorite--A new apple under the above name is described in the Rural World as a seedling raised on the farm of John Huntsman, Fayetteville, Mo. The description says: "Size, large; color, yellow, with a red cheek; and quality, first rate; season, from December to April; tree, a regular, heavy bearer - not having failed of producing a crop in twenty-two years."
Horticulture.— (By Prof. C. H. Butcher.) One of the earliest agricultural products of this county was the Huntsman's Favorite apple. This is a standard variety of today. The following interesting account of its origin was given by Judge Harvey Harrison to Mr. W. E. Crissey, in 1889: "About 1831-32 or '33, John Huntsman entered eighty acres of land west of where Fayetteville now is in this county. He and George McMahan and Joseph Hobson went to John Ingram's place about ten miles north of Lexington and bought each of them one hundred seedling apple trees and set them out on their farms. In John Huntsman's, farm or orchard, there was the Huntsman's Favorite. This was the tree at the north end of the orchard near the barn. "Ingram's nursery was in a pawpaw patch, or thicket, and my theory is that this particular young tree grew on the root of a pawpaw tree and mixed and gave it the choice flavor of the Huntsman's Favorite apple."