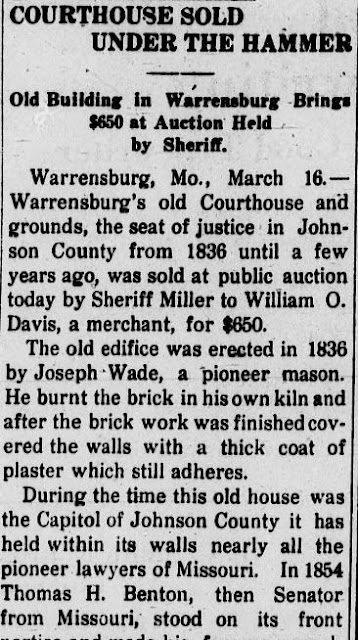 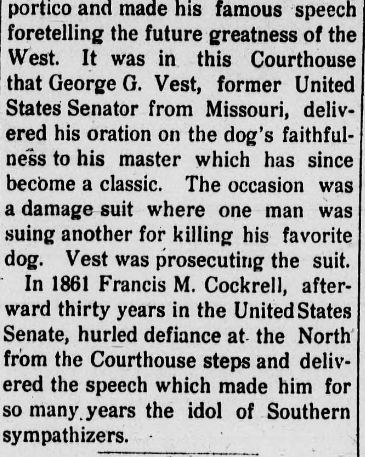 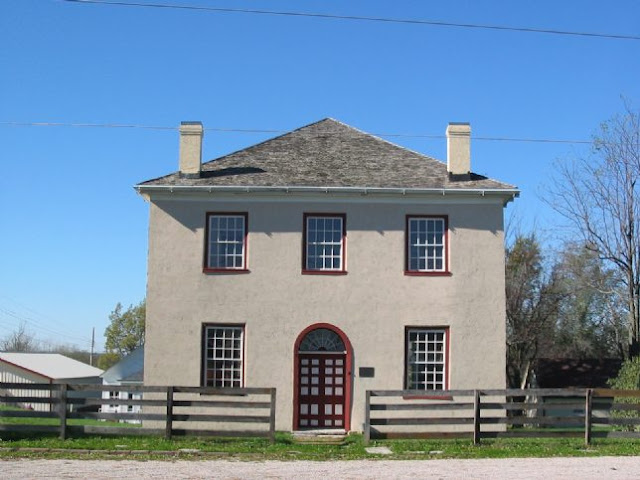 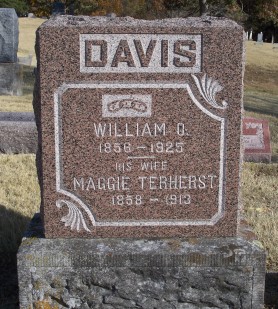 Biographical Sketch of W. O. Davis, Johnson County, Missouri, Warrensburg, Missouri. From "History of Johnson County, Missouri," by Ewing Cockrell, Historical Publishing Company, Topeka, Cleveland, 1918.
W. O. Davis, the well-known grocer of Warrensburg, is one of Johnson County’s prominent pioneers and valued citizens. The Davis family came to Warrensburg just after the Civil War in 1866. W. O. Davis was born May 26, 1856 in Indiana. He is the son of Lawrence T. and Amanda Java (Johnson) Davis, natives of Fleming county, Kentucky. Lawrence T. Davis was born January 6, 1830 and Amanda J. (Johnson) Davis was born October 11, 1834. They were united in marriage in Kentucky and moved to Indiana and from there to Illinois in 1860. To Lawrence T. and Amanda J. Davis were born the following children: W. O., the subject of this review; a son born in 1858, died in infancy; Mary H., died in infancy; James Lewis, born April 25, 1862 and died in Warrensburg, January 8, 1917; Charles Coleman, born May 18, 1865 and resides in Houston, Texas; Lizzie May, born July 17, 1867, the wife of Lennis Owen, Salt Lake City, Utah; Arbelle, born March 2, 1870 the wife of Thomas Welch, Palisades, Colorado; and twins, died in infancy. Lawrence T. Davis was a carpenter by trade but he was engaged in the dry goods business in Illinois, for six years prior to coming to Warrensburg, in 1866. He had intended going into business in Warrensburg, but a short time after he came he was robbed of about fourteen hundred dollars, which he had concealed in a trunk in his home, and this misfortune compelled him to return to the carpenter's trade. His death occurred from a stroke of paralysis June 14, 1906, and his wife died March 1, 1912, and they were interred in the cemetery at Warrensburg. W. O. Davis attended the public schools of Warrensburg. When he had attained maturity he engaged in farming until 1895, when he purchased the grocery located on the corner of Main and Gay streets, which belonged to Morris Ellis Shryack. This is the only store now in the old town of Warrensburg. Mr. Davis recalls the time when there was a line of stores east and south of the old court house square. A printing office was situated on the south side of the block and there the Warrensburg "Standard" was printed. The first hotel was on the corner of Main and Market streets and a block west was the Union Hotel, occupied in the early days as a residence by Senator Francis M. Cockrell. The old court house is now owned by Mr. Davis. The following inscription is on the walls of the court house: "Within these walls on September 23, 1870 Senator George Graham Vest delivered his famous eulogy on the dog. Senator Vest died August 14, 1904 and was buried in Bellefontaine Cemetery, St. Louis." The inscription was placed there by the Missouri State Historical Society. Mr. Davis remembers the occasion and speech, of which the following is a quotation: "The best friend a man has in the world may turn against him and become his enemy. His son or daughter that he has reared with loving care may prove ungrateful. Those who are nearest and dearest to us, those whom we trust with our happiness and our good name, may become traitors to their faith. The money a man has, he may lose. It flies away from him, perhaps when he needs it most. A man's reputation may be sacrificed in a moment of ill-considered action. The people who are prone to fall on their knees to do us honor may be the first to throw the stone of malice when failure settles its cloud upon our heads. The only absolutely unselfish friend that a man can have in this selfish world, the one that never proves ungrateful or treacherous is his dog." January 2, 1881, W. O. Davis and Maggie Terherst were united in marriage. She was the daughter of Aaron Terherst, a pioneer of Warrensburg. Her mother died when Mrs. Davis was but a child and burial was made in the cemetery at Warrensburg. Aaron Terherst died at Columbus, Kansas and his remains were interred in the cemetery at that place. To W. O. and Maggie Davis were born five children: Louis Aaron, who is wire chief and assistant superintendent for the Home Telephone Company of Warrensburg; Mrs. Laura Bradley, Warrensburg; Harry and Noble, who are associated with their father in the grocery business and practically have charge of the, West End Store, where their pleasant, obliging, congenial manners have made them scores of friends and patrons; and Emma May, who lives at home with her father. Mrs. Davis died on August 28, 1913 and interment was made in the Warrensburg cemetery. Mr. Davis resides at 405 West Culp Street in Warrensburg, Missouri in the home where he has lived for the past 21 years. In addition to his home, grocery store and building, and the old court house, W. O. Davis is the owner of 75 acres of valuable land in Madison and Warrensburg townships, Johnson County. He is intensely interested in the early history of Missouri and is himself a natural historian. He has several very valuable relics, among which are a revolver, ball and cap style, which was stamped on the plate, "Made by A. Waters Melbury, MS 1838," a dirk, which his father-in-law, Aaron Terherst, carried in the Mexican War, and an old pepper box six-shot revolver, which is still in working order. Mr. Davis is affiliated with the Independent Order of Odd Fellows and the Modern Woodmen of America.
USGENWEB NOTICE: In keeping with our policy of providing free information on the Internet, data may be used by non-commercial entities, as long as this message remains on all copied material. These electronic pages may NOT be reproduced in any format for profit or for presentation by other persons or organizations. Persons or organizations desiring to use this material for purposes other than stated above must obtain the written consent of the file contributor. This file was contributed for use in the USGenWeb Archives by:  Penny Harrell <Incog3678@aol.com


On the Old Town Square in Warrensburg remains the only surviving example of one of the most popular nineteenth century courthouse designs in Missouri. The Old Johnson County Courthouse still stands at its original location on North Main Street and through restoration efforts retains much of its Federal style.


Only four years after Johnson County was created, in 1838, construction was started on the building. William N. Wade was awarded the building contract and Harvey Dyer was designated the supervisor of construction. Martin Warren, for whom the town is named, originally owned the property on which the courthouse sits. One of the three commissioners who chose the site was Daniel Morgan Boone, son of Daniel Boone.
The initial $2500 appropriation was not enough to execute the original plan. To begin with, the plan called for a 44-by-36 foot, two-story brick building with three doors and a cupola (dome-like structure placed on the roof top). Lack of funds required the base to be modified to a 36 foot square and the anticipated cupola was never built.
After a prolonged construction period, the court accepted the building on July 28, 1842. Additional funding brought the final cost of the Old Courthouse to $2800. The entire first story with its brick floor housed the court and the wooden-floored second story contained offices. The exterior of the building was originally red brick, but was covered with buff-colored stucco in 1867.
The courthouse served as a federal garrison during the Civil War and was the center of Johnson County government activity until the railroad came to Warrensburg in 1864. Most of the business district slowly moved several blocks east toward the depot and ultimately a new courthouse was built in that neighborhood. Near the end of its use as a courthouse in 1870, the Old Drum trial took place, during which George Graham Vest delivered his classic speech, Eulogy of the Dog

.
After 1871, the Old Courthouse was used as a school, a church, a courthouse again for a year, and finally a private residence during which time it was repeatedly remodeled. In 1965, the Johnson County Historical Society purchased the property and began restoration and preservation efforts guided by the original specifications.
Once again furnished as a courthouse with original items supplemented by period pieces, the building has been restored to its 1870 appearance. The plaque commemorating Vest’s famous speech remains at the entrance to the Old Courthouse.
The building is now part of the Johnson County Historical Society museum complex and is available for tours. The Old Johnson County Courthouse is on the National Register of Historic Places.