1864 May 23-25 Quantrill with 200 Guerilla's in Johnson County and other Activities near Holden, Kingsville, Chilhowee 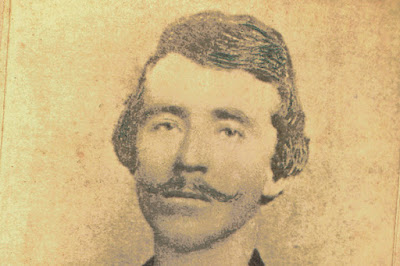 MAY 23-25, 1864. Scout from Warrensburg, Mo.
Report of Colonel James McFerran, First Missouri State Militia Cavalry.
HDQRS. FIRST CAVALRY, MISSOURI STATE MILITIA, Warrensburg, Mo., May 25, 1864.
GENERAL: I have the honor to state I have been absent from this station since the morning of the 23rd instant; that at about daylight that morning I received information that about 20 guerrillas, at 5 p. m. day before, 4 miles northeast of Chilhowee, had attacked Solathel Stone, orderly sergeant, and 5 men, one of them Judge King, of Captain W. H. Thompson's company of citizen guards, and killed Judge King and captured the sergeant and 3 of his men; 1 escaped. The party were scouting at the time. The guerrillas got the arms of the captured men. I also learn messengers about the same time that another of 15 were seen the night before near line of the railroad east of Holden. I also received a communication about the same time from Lieutenant Hardesty, at Germantown, on Saturday night, 21st instant, that 100 guerrillas had crossed the Osage at Taberville, coming north; Lieutenant Goodbrake, commanding at Clinton, endorsed this communication, on that he had reliable information that the number was much large than stated by Lieutenant Hardesty. I immediately started for Holden with 47 men, and on the way learned from a woman that 30 guerrillas had taken her Husband's horse the night before about 6 miles east of Holden and north of the road, and that they went north. We reached Holden at 12 m., and not being able to hear of any guerrillas south of that point, I sent Captain Wyckoff with 27 men of his company to scout the Black Water timber, and after having done so to return to Warrensburg of Company A with me. Upon inspection of Company M, I found but 12 men for duty at Holden. I went to Kingsville the same evening, where I found 20 men of same company, which I inspected and returned to Holden.
Captain Eads informed me that he had sent his two teams to the vicinity of Hopewell, LaFayette County, Mo., for forage under an escort of 20 men, and that they would return next day. At dark a messenger came to Holden from Captain Taggart with the information that Quantrill with 200 men was about 6 miles south of Holden marching in the direction.
I immediately sent messengers to Kingsville for the men at that place to join me, and with the 22 men marched for Hopewell, taking the railroad; transportation and company property with me. About 8 miles from Holden we were joined by the 20 men from Kingsville and 15 citizen guards of Captain Jones' company. We reached Hopewell about daylight. I immediately sent messengers to Captain Burris to join me, which he did at 10 a. m. with about 65 men, and we marched immediately for Holden, where we arrived at about 4 p. m. Upon communicating again with Captain Taggart we learned that the guerrillas had left his neighborhood the night before and gone north, but was unable to learn their course. We remained at Holden last night, and this morning I sent captain Burris with his command to scout the country between Lone Jack and Chapel Hill, on his return to his camp on Walton's farm, in Texas Prairie, and I came to this place. I learn since arriving here that Captain Wyckoff returned to this place on last evening, finding no trace of guerrillas on Black Water. As you directed a company to be sent to Kingsville Captain Wyckoff marched for that point last night and is now at that point. Company M is at Holden.
The descent of the guerrillas upon Captain Taggart's neighborhood was sudden, and in such force that he was unable to get his company together, each man saving himself by hiding in the brush. At Hopewell I sent messengers to Captain Eads' forage train, and they came into Holden immediately after we arrived there. I cannot say for a certainty how many guerrillas were in the vicinity of Holden, but am satisfied that there were more than 100, from report counts by different persons. The instructions forwarded in relation to the scout beginning on the 27th have sent to major Mullins and Captain Burris, in the western part of La Fayette Country.
In ordered to complete my monthly inspection it will be necessary to visit Companies B, E, and K in Henry. I except to start there, and day or two. There should be another company of troops here, and I am inclined to bring Company E, leaving Companies B and K in the field in the western part of Henry. I think this company can better be spared than any other from present locations. A company from some other regiment would be better, as all of my regiment now in the field should be kept there.
I am, general, very respectfully, your obedient servant,
JAMES McFERRAN,
(note: 1st Missouri Militia Cavalry: Col James McFerran (arrested Oct. 23 at the Battle of Westport, Ltc Bazel Lazear)
Colonel First cav., M. S. M., Commanding Third Sub-District.
Brigadier General E. B. BROWN.

Brig. General E. B. Brown
Civil War and After Biography

Although successful in many engagements, Brown was criticized by some for lack of vigor. This came to a head duringSterling Price's 1864 raid of Missouri. At the Battle of Westport, Union Maj. Gen. Alfred Pleasonton relieved Brown of command and arrested him for failing to promptly obey an order to attack. Brown then assumed command of the District of Rolla in January 1865 until the end of the war.
Post-war
Brown was the United States pension agent in St. Louis from 1866 to 1868. He resigned to operate a farm in Illinois. He died in the home of a granddaughter at West Plains, Missouri, on February 11, 1902, and was buried next to his wife in Cuba, Missouri.
Link to Warrensburg Execution of a Guerilla Leader 20 May 1864

Regarding the photographs accompanying the article: Neither are William Clarke Quantrill. The fellow in the stovepipe hat is James Henry Lane. The other photograph is William T. "Bloody Bill" Anderson.