George Vest
Eulogy of the Dog
September 23, 1870
George Graham Vest served in the United States Senate for twenty-four years, from 1879 to 1903, but the act for which he is best remembered is a speech delivered in an insignificant court case while he was still a lawyer in rural Missouri.
Born in Kentucky in 1830, Vest moved in the 1850's to Missouri, where he practiced law and served in the state legislature. During the Civil War, he was a member of the Confederate Congress. After the war, he practiced law until his election to the Senate as a Democrat.
The lawsuit that brought him immortality concerned the shooting of "Old Drum," the best hunting dog of a local farmer. A neighbor who suspected that Old Drum was moonlighting by killing his sheep gave orders to shoot the dog if it appeared on the property again. When Old Drum was found dead near the neighbor's house, the farmer filed suit, seeking damages of fifty dollars. After a jury awarded twenty-five dollars, the neighbor successfully appealed the ruling. The dog's owner, however, succeeded in his motion for a new trial and hired two skilled lawyers, one of them George G. Vest.

The Billings gazette., August 30, 1904
ANECDOTES OF VEST
How Missouri's Ex-Senator Won a Jack Pot.
AN INSTANCE OF HIS BEADY WIT
-With Crushing Effect When Interrupted In a Speech
-How the Senator Lost His Teeth
-A Gallant Impromptu Speech at a Fourth of July Celebration. 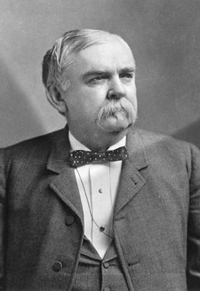