1861 Knife taken from Rebel at the Battle of Blackwater, North of Knob Noster 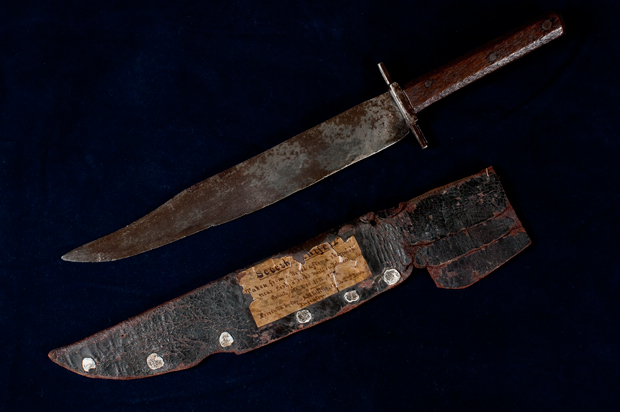 This civilian knife has a wooden handle; the label on the scabbard reads “Secesh knife taken from a rebel after skirmish near Kirkpatrick’s Mill, Johnson County, Mo., Dec. 18, 1861. Presented by R. M. Littler, Co. B 2nd Iowa Inf.”


The knife was taken at the skirmish at Milford, Missouri, also known as the skirmish at Blackwater Creek, just northwest of Knob Noster, Johnson County, Missouri. The skirmish occurred on December 19, 1861, between Union forces under the command of General John Pope and Confederate forces under the command of Colonel Franklin Robertson. The Confederate forces were camped at Milford on recruiting duty when they were surrounded and captured by the 4th U. S. Cavalry, supported by the 1st Iowa Cavalry and the 2nd Missouri Cavalry (“Merrill’s Horse”). The Union forces captured over 750 /1500) Confederates and considerable supplies and equipment while suffering very light casualties.


The 2nd Brigade (of which the 2nd Iowa Infantry was a part) did not engage in the skirmish, but was held in reserve.