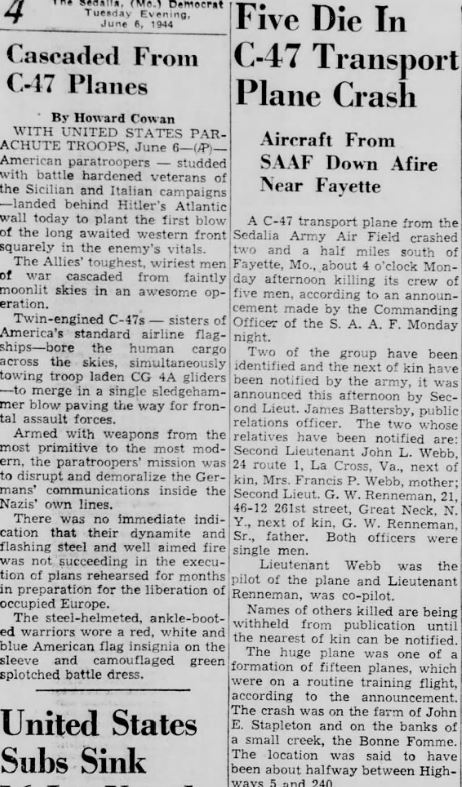 A C-47 transport plane from the Sedalia Army Airfield crashed two and a half miles south of Fayette, Mo, about 4 o'clock Monday afternoon killing its crew of five men, according to an announcement made by the Commanding Officer of the SAAF Monday night. Two of the group have been identified and the next of kin have been notified by the Army. It was announced this afternoon by Second Lieutenant James Battershy, public relations officer. The two whose relatives have been notified are Second Lieutenant John L. Webb, 24 route 1, La Cross, VA., next of kin Mrs. Francis P. Webb, mother; Second Lieutenant G. W. Renneman, 21, 46-12 261st street, Great Neck, N. Y. next of kin, G. W. Renneman, Sr. father. Both officers were single men.


Lieutenant Webb was the pilot of the plane and Lieutenant Renneman, was the co-pilot. Names of the others killed are being withheld fro publication until the nearest of kin can be notified. The huge plane was one of a formation of fifteen planes which were on a routine training flight, according to the announcement. The crash was on the farm of John E. Stapleton and on the banks of a small creek, the Bonne Femme. The location was said to have been about halfway between Highway 5 and 24o.
James Franklin Elliott died from injuries one month later.
James Franklin Elliott Grave Link
Airframe link 41-38596