John Lewis Barkley Collection Link
Pfc. John Lewis Barkley of Holden....."Congressional Medal of Honor occurred on October 7, 1918, when he climbed into an abandoned French tank and singlehandedly (with a German machine gun he repaired) held off an advancing German force, killing hundreds of enemy soldiers."
AWARDS AND CITATIONS
Congressional Medal of Honor
Awarded for actions during the world war.


The President of the United States of America, in the name of Congress, takes pleasure in presenting the Medal of Honor to Private First Class John Lewis Barkley (ASN: 2214317), United States Army, for extraordinary heroism on 7 October 1918, while serving with Company K, 4th Infantry, 3d Division, in action near Cunel, France. Battle of the Argonne Forest.
Battle Link
Private First Class Barkley, who was stationed in an observation post half a kilometer from the German line, on his own initiative repaired a captured enemy machine gun
and mounted it in a disabled French tank near his post.
Shortly afterward, when the enemy launched a counterattack against our forces, Private First Class Barkley got into the tank, waited under the hostile barrage until the enemy line was abreast of him and then opened fire, completely breaking up the counterattack and killing and wounding a large number of the enemy. 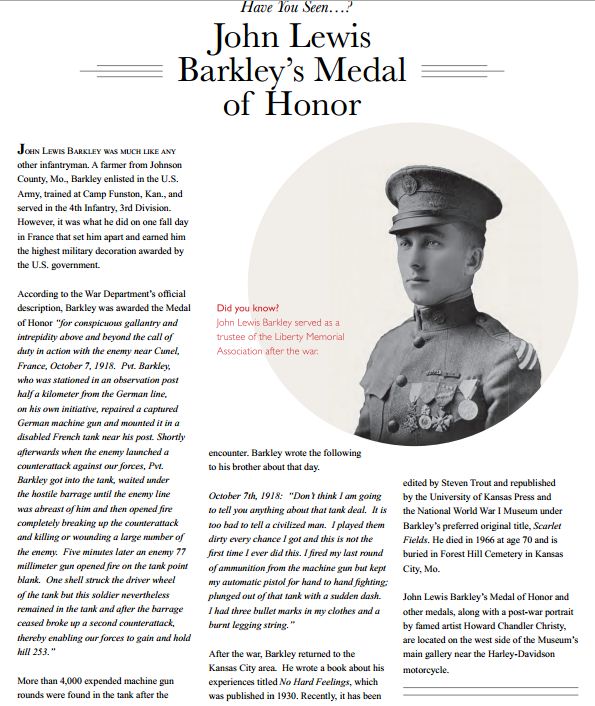 Born on August 28, 1895 in Holden, Missouri, John Lewis Barkley was given the title of the most decorated soldier in the Midwest. He entered the service in Blairstown, Missouri.


Barkley was awarded the Congressional Medal of Honor on October 7, 1918 for single handily breaking up two German assaults on hill "253" that Allied forces were trying to hold. He also fixed a captured German machine gun, mounted it on a French tank, waited for the battle to surround him, and then opened fire on the Germans.

Barkley was cited for bravery and was presented with the Congressional Medal of Honor by U.S. General John Pershing.
He married Elizabeth Barkley Ozias in 1963. She was born on September 8, 1882 and died on September 14, 1969.


He was a Private, First Class, U.S. Army, Company K, fourth infantry, third division. He was in World War I. Barkley received the nation's highest military award for bravery. He was also a member of Kansas City police department as a detective. Barkley received the following medals for his service:


the British Distinguished Service Cross; the French Medallile Militaire; the French Croix de Guerre; the Belgian War Cross; the Italian War Cross; the Medal de Brauere of Montenegro.
His World War I victory medal carried six battle clasps. In Valley Forge there are fifty acres of land with one acre for each state. Each tree there has a plaque 16 by 8 inches on it. One tree has John Lewis Barkley, World War I . When he got out of the service he farmed just outside of Johnson County. He farmed 200 acres of land. He also grew up with two brothers. In the people's eyes of today he is considered to be a man instinctively liked, quiet, unassuming, and modest. John L. Barkley also had attended State Normal College, today known as UCM, Warrensburg. 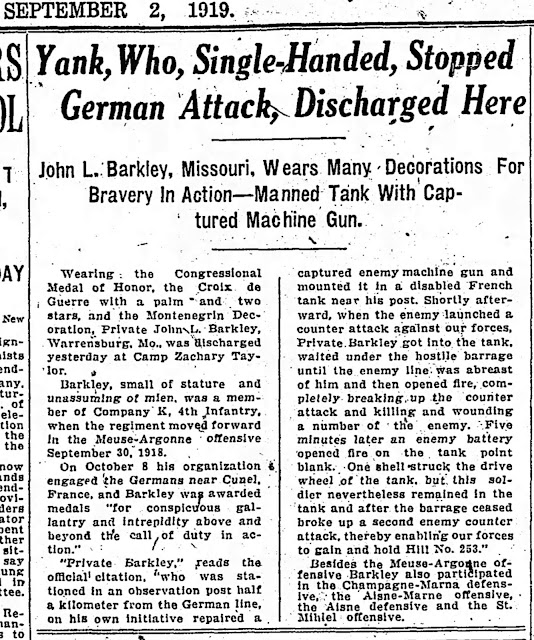 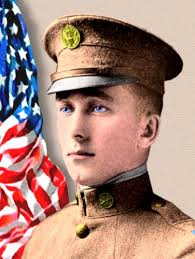 
Introduction and notes by Steven Trout, Afterword by Joan Barkley-Wells


Those words describe the moment when Private John Lewis Barkley first grasped the grim reality of the war he had entered. The rest of Barkley’s memoir, first published in 1930 as No Hard Feelings and long out of print, provides a vivid ground-level look at World War I through the eyes of a soldier whose exploits rivaled those of Sergeant York.
A reconnaissance man and sniper, Barkley served in Company K of the 4th Infantry Regiment, a unit that participated in almost every major American battle. The York-like episode that earned Barkley his Congressional Medal of Honor occurred on October 7, 1918, when he climbed into an abandoned French tank and single handedly held off an advancing German force, killing hundreds of enemy soldiers. But Barkley’s memoir abounds with other memorable moments and vignettes, all in the words of a soldier who witnessed war’s dangers and degradations but was not at all fazed by them.


Unlike other writers identified with the “Lost Generation,” he relished combat and made no apology for having dispatched scores of enemy soldiers; yet he was as much an innocent abroad as a killing machine, as witnessed by second thoughts over his sniper’s role, or by his determination to protect a youthful German prisoner from American soldiers eager for retribution. This Missouri backwoodsman and sharpshooter was also a bit of a troublemaker who smuggled liquor into camp, avoided promotions like the plague, and had a soft heart for mademoiselles and Fraulein alike.


In his valuable introduction to this stirring memoir, Steven Trout helps readers to better grasp the historical context and significance of this singular hero’s tale from one of our most courageous doughboys. Both haunting and heartfelt, inspiring and entertaining, Scarlet Fields is a long overlooked gem that opens a new window on our nation’s experience in World War I and brings back to life a bygone era.


“Barkley was one of the war’s outstanding heroes and his memoir is one of the most readable and detailed accounts of an American soldier’s experiences to emerge from it.”—Edward M. Coffman, author of The War to End All Wars

“A laconic, uncompromising combat memoir by a young Missourian who took quiet pride in his brutal skills.”—David D. Lee, author of Sergeant York: An American Hero

“A gripping combat narrative that portrays the war as both horrific slaughter and rite of passage.”—Jennifer D. Keene,author of World War I: The American Soldier Experience

On February 27, 2011, the last U.S. World War I veteran passed into history. Former World War I “doughboy” Frank Buckles died at age 110, just over three years from what will be the beginning of the First World War centennial (2014–18). Buckles’ passing prompted the Liberty Memorial, America’s National World War I Museum in Kansas City, Missouri, to host a ceremony honoring the memory of all World War I U.S. military personnel who served during the Great War. On Saturday, March 12, 2011. 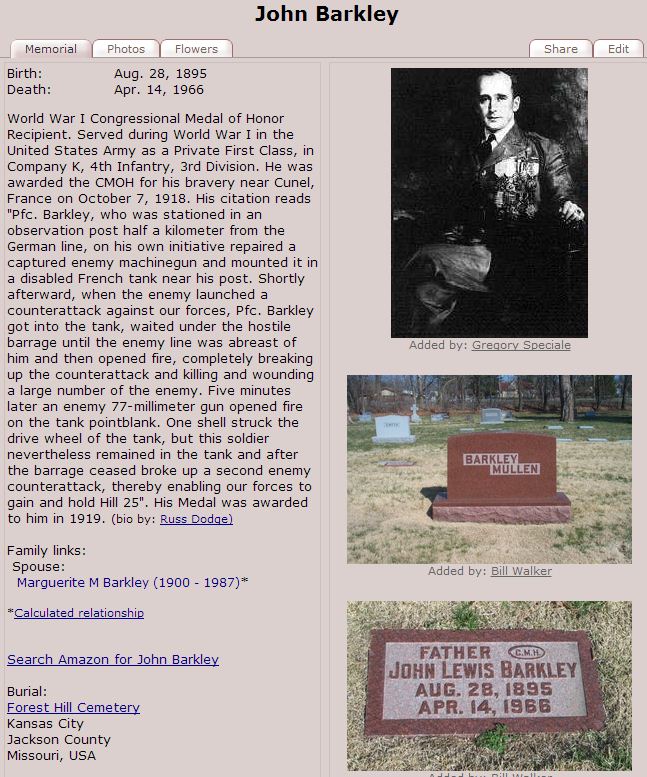 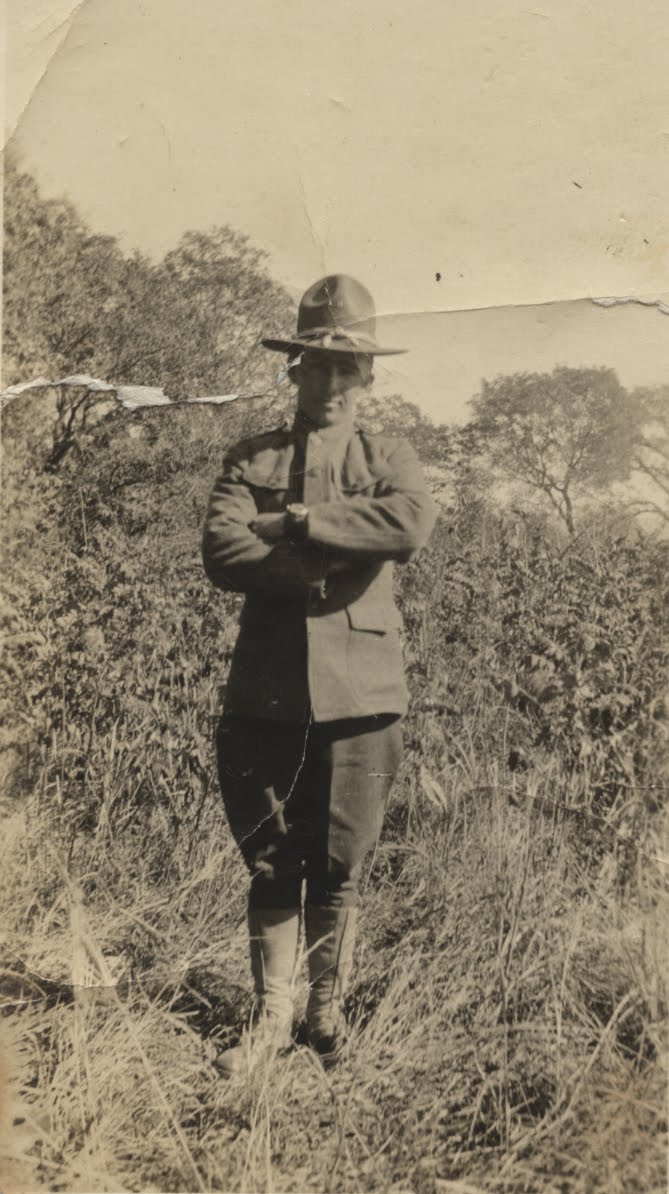 
Even among the vast holdings of the National World War I Museum, it is difficult to overlook the John Lewis Barkley Collection. This large collection of letters, photographs, postcards, certificates, and other material tells the story of a 22-year-old from rural Henry County, Missouri who became one of the most decorated veterans in the state.


John Lewis Barkley was inducted into the army at Warrensburg on September 20, 1917. He served overseas from April 1918 to August 1919. Barkley earned a Congressional Medal of Honor “for valor above and beyond the call of duty...near Cunel, France, October 7, 1918, while serving as private, first class, Company K, 4th Infantry, 3rd Division...” 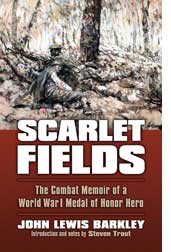 
In letters, as well as in his book Scarlet Fields (originally titled No Hard Feelings), Barkley described the actions that earned him the prestigious medal. Positioned less than a mile away from the enemy, Barkley took it upon himself to repair an enemy machine gun, mount it on an immobilized tank, and wait for a German counterattack. As soon as the attack began, Barkley readied himself in the tank and opened fire with the refurbished machine gun. Barkley's actions broke up the attack and inflicted many casualties. Although German artillery fire struck the tank, Barkley remained in his position and repelled a second attack. His actions allowed the Allies to hold Hill 253, an important strategic point along the front lines. 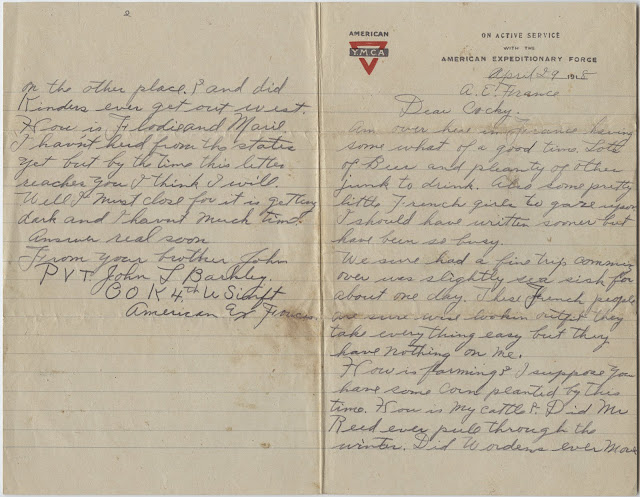 One of many letters from Barkley to his brother "Cocky".


John Lewis Barkley was one of only 124 individuals to be awarded the Medal of Honor for his extraordinary actions during the First World War. While the Medal of Honor is the highest military honor that can be awarded by the United States, it was not the only recognition Barkley received. After the war, Barkley accepted the British Distinguished Service Cross, the French Medallile Militaire, the French Croix de Guerre, the Belgian War Cross, the Italian War Cross, and the Medal de Brauwere of Montenegro. 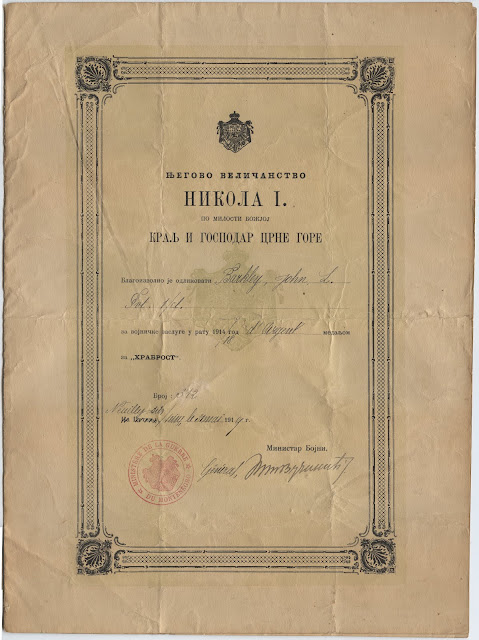 
These medals, a portrait painted of Barkley by Howard Chandler Christy, and additional artifacts related to this extraordinary Missourian can be seen at the Research Center in the National World War I Museum.