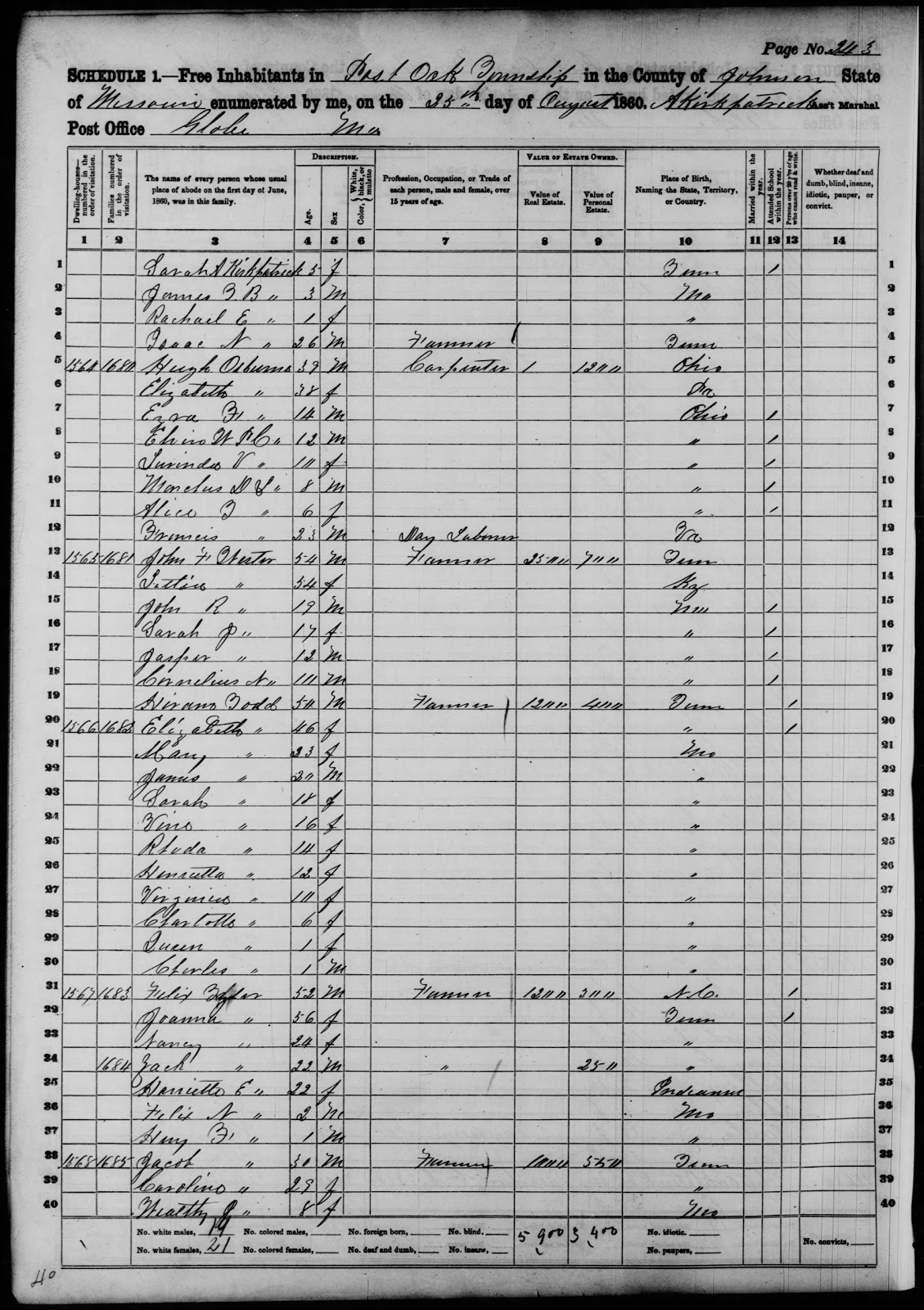 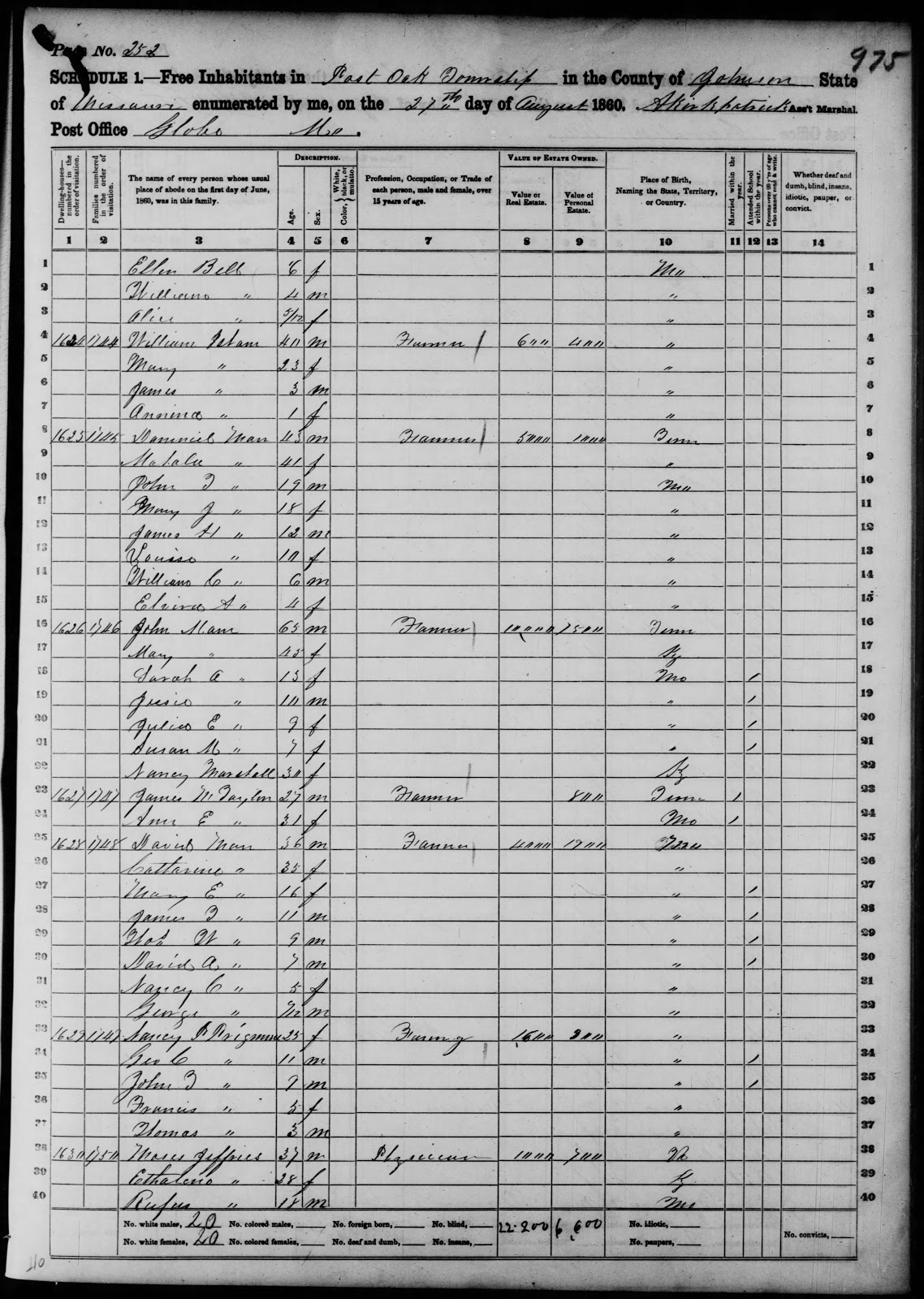 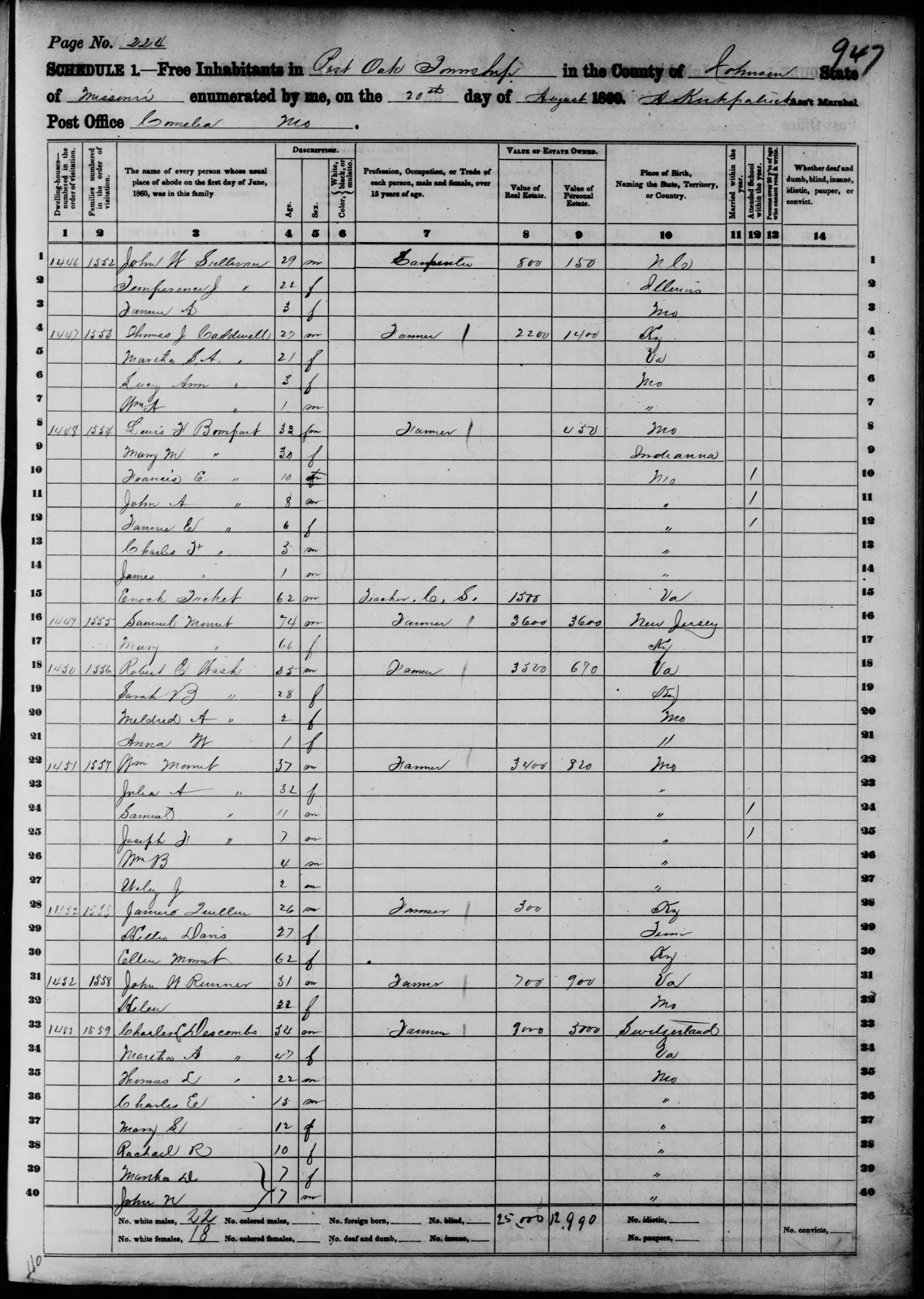 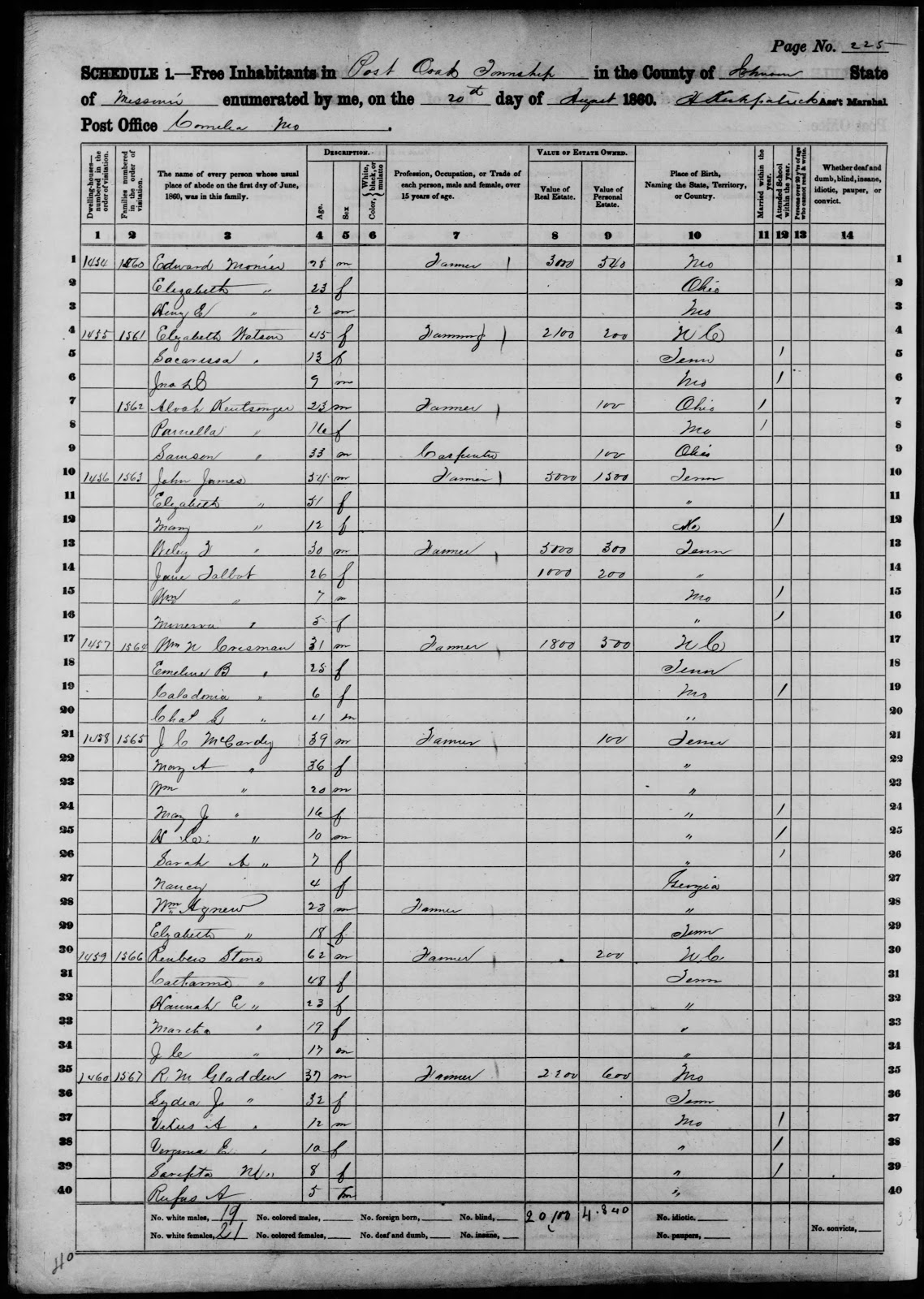 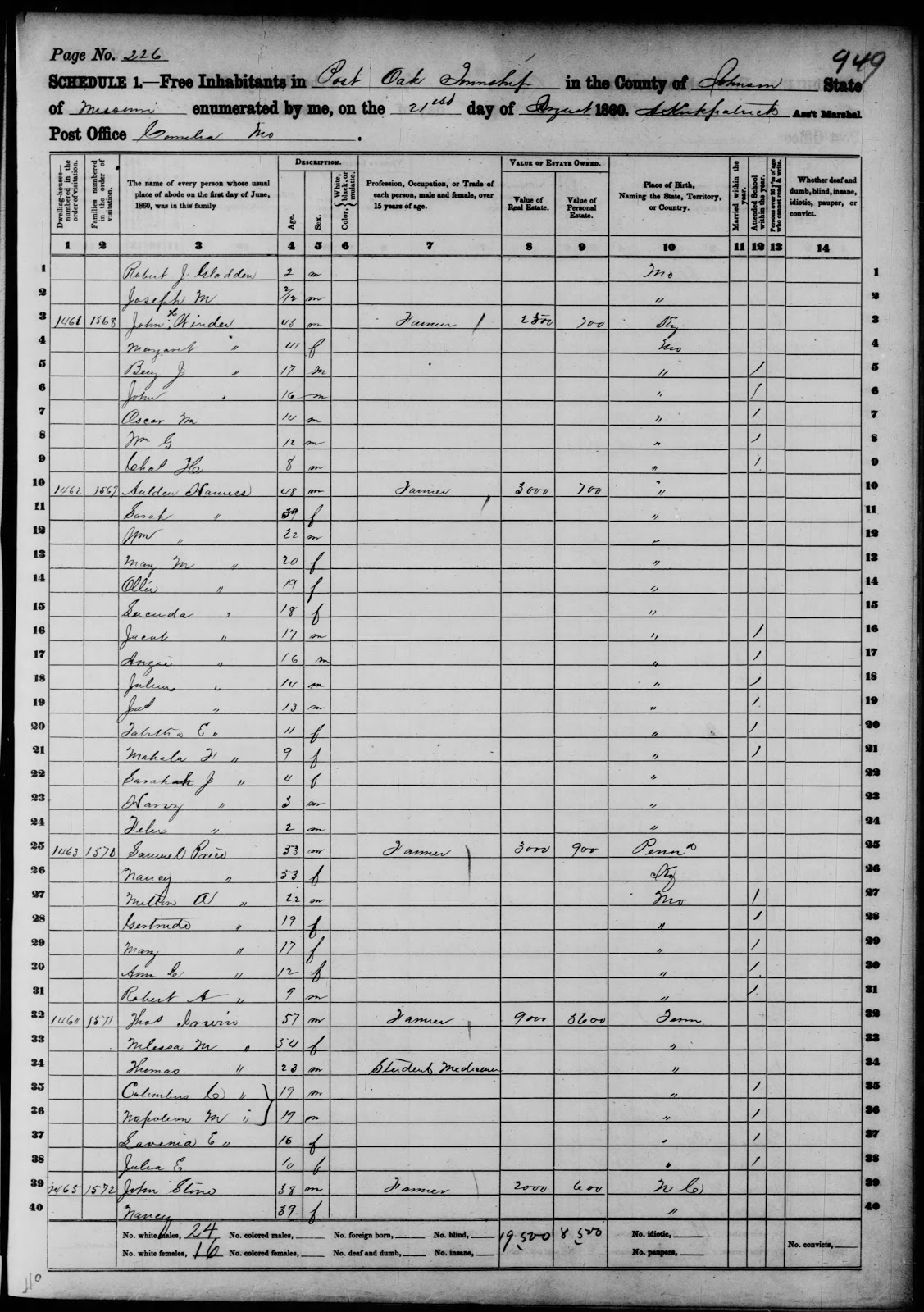 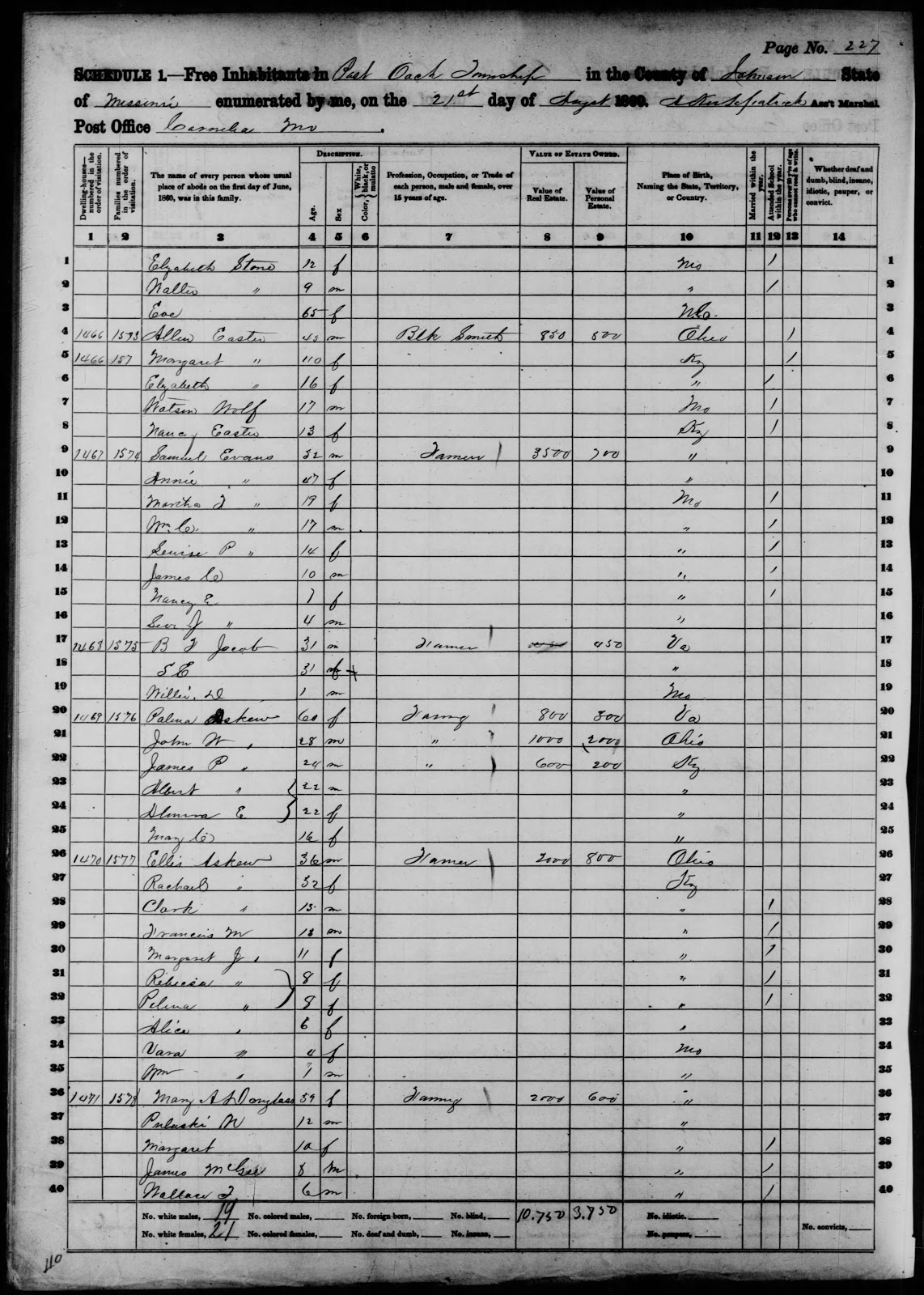 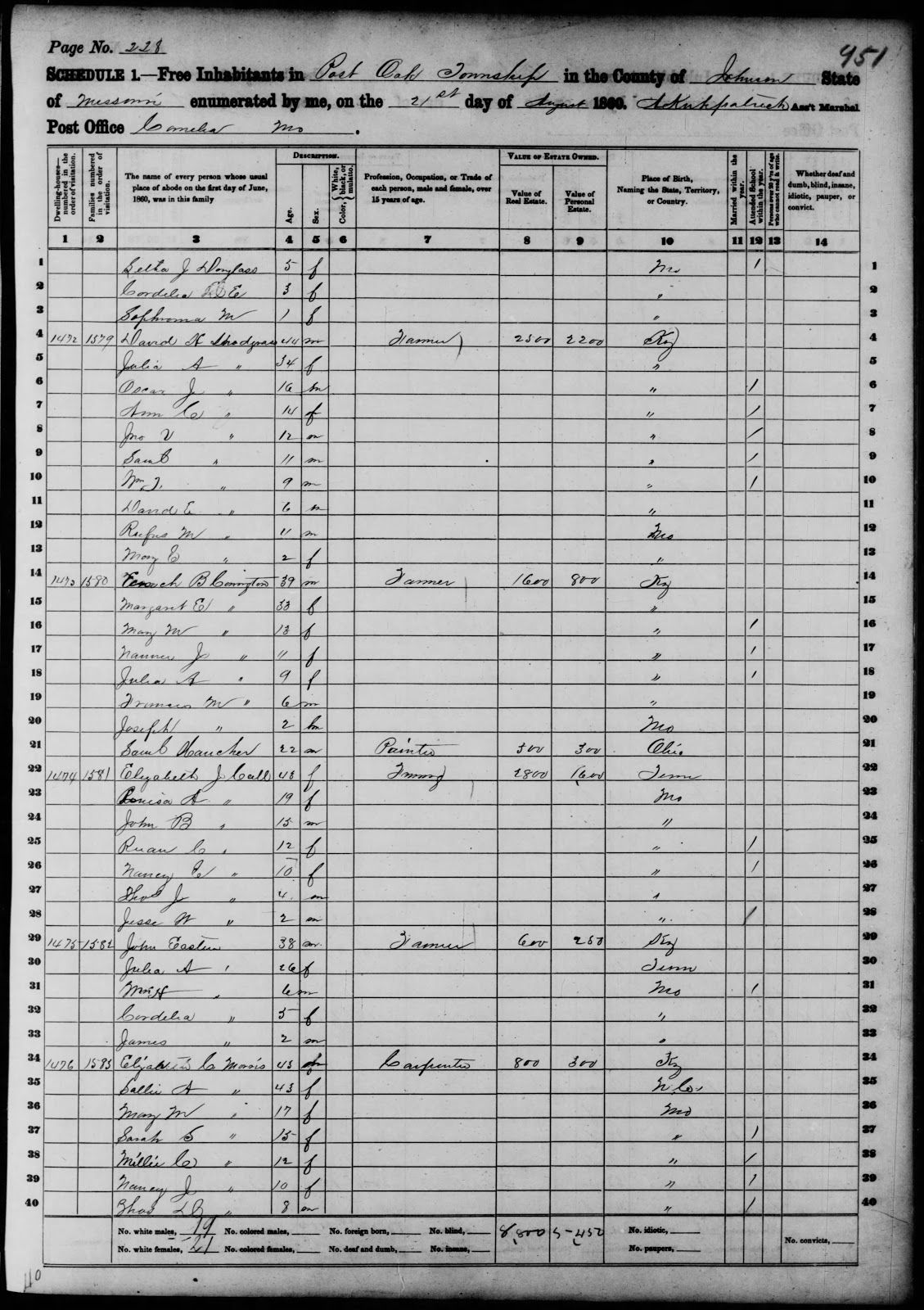 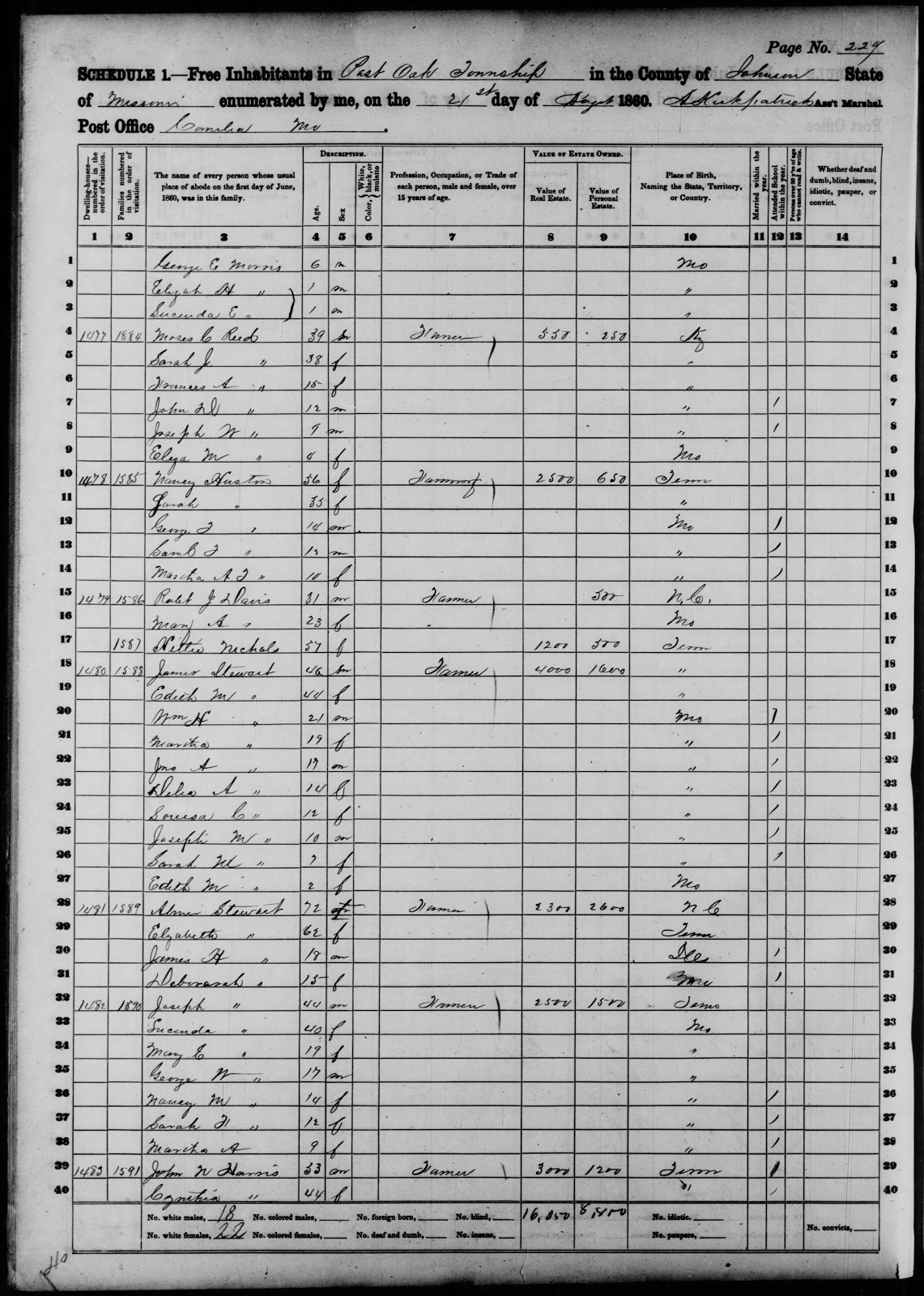 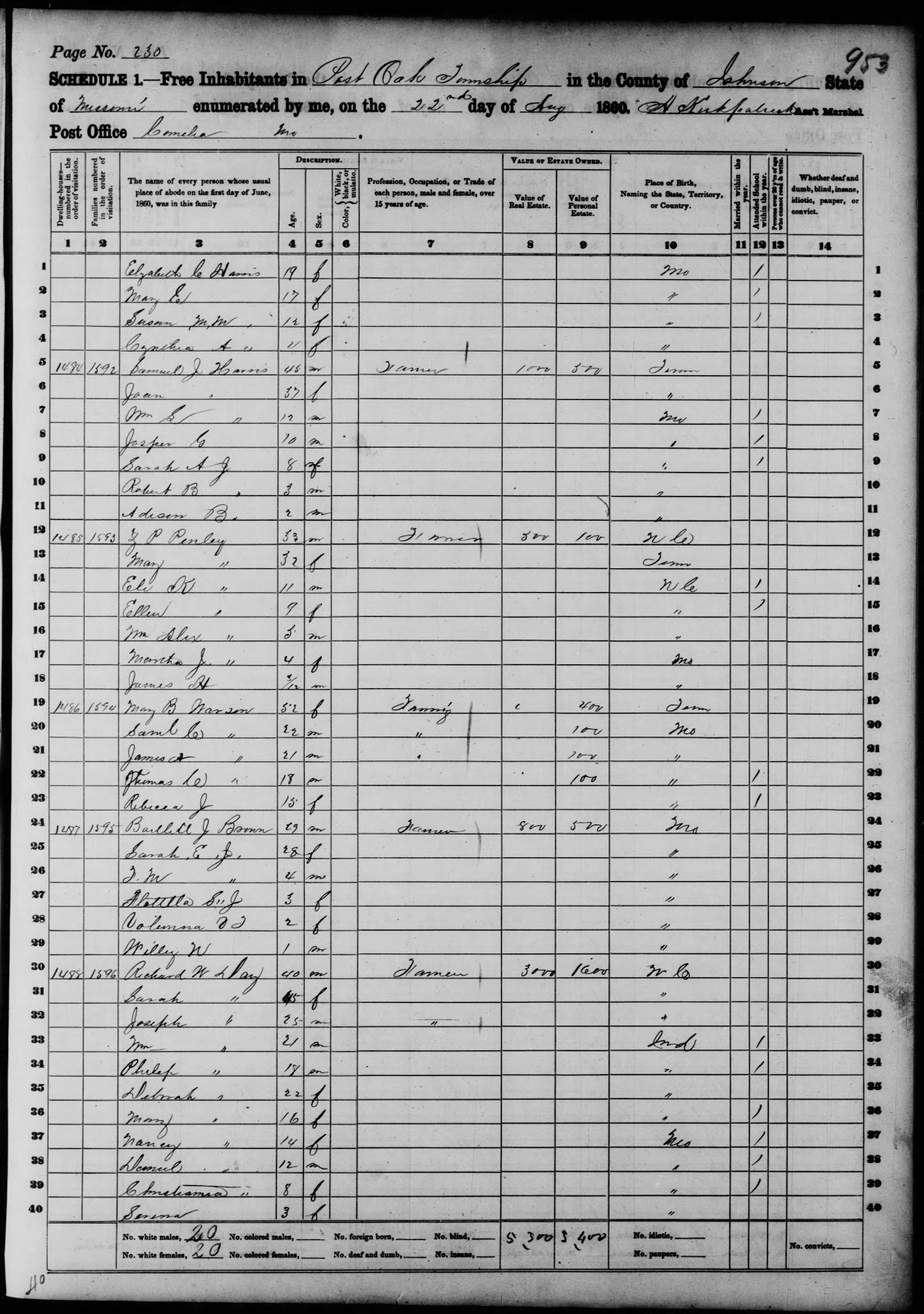 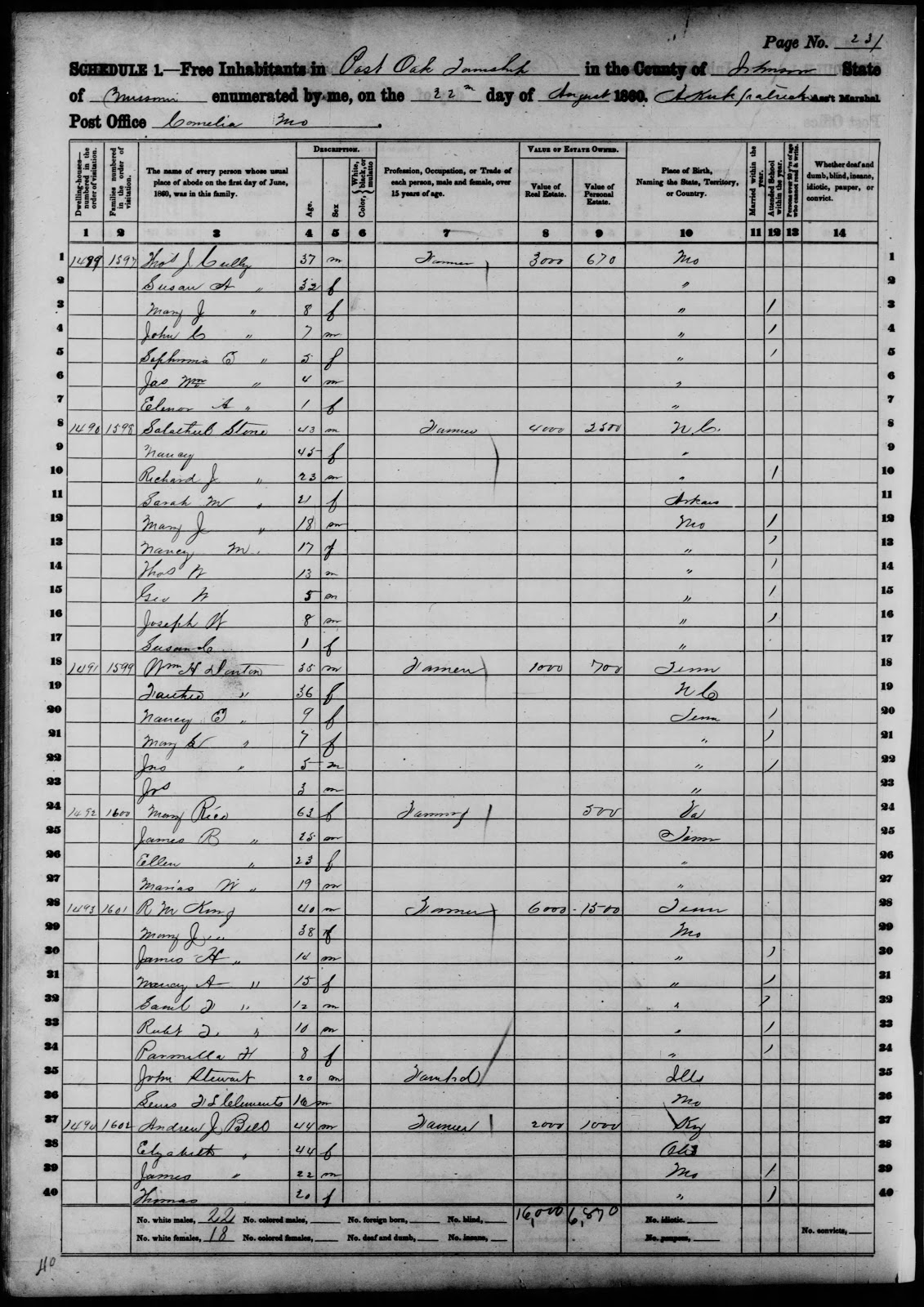 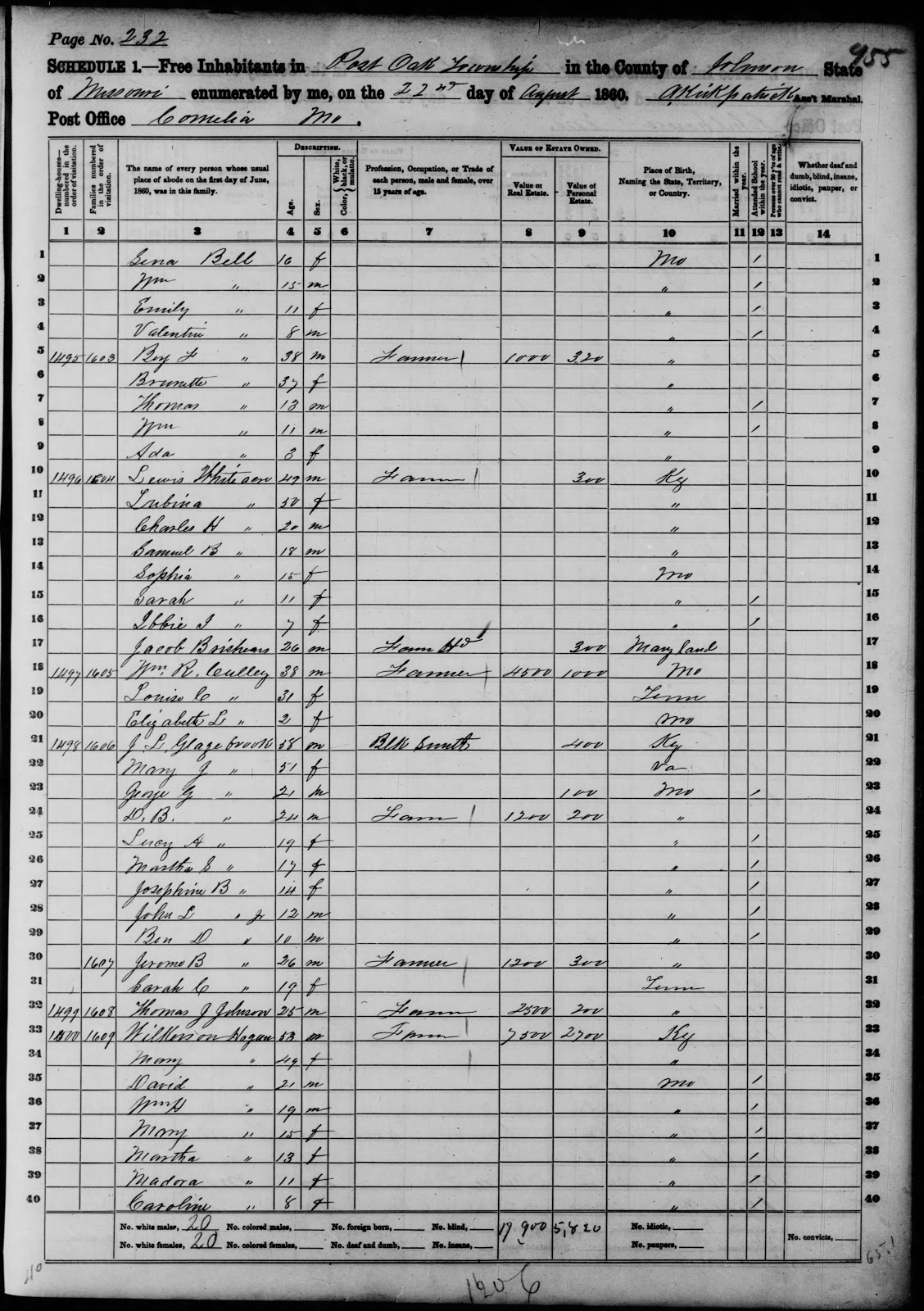 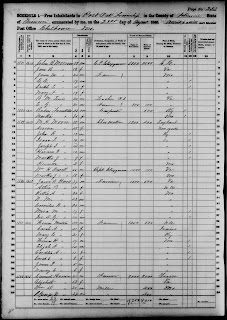 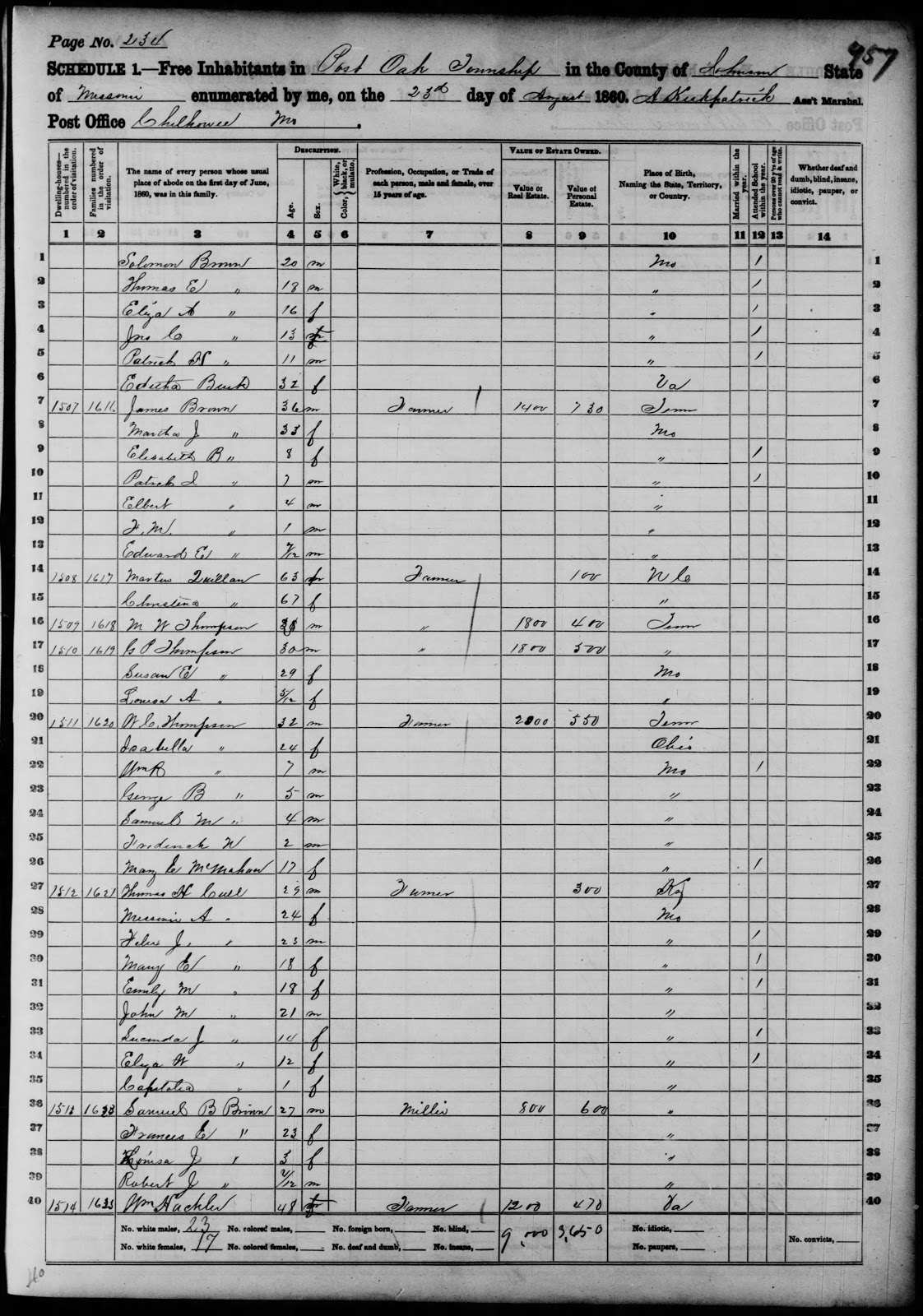 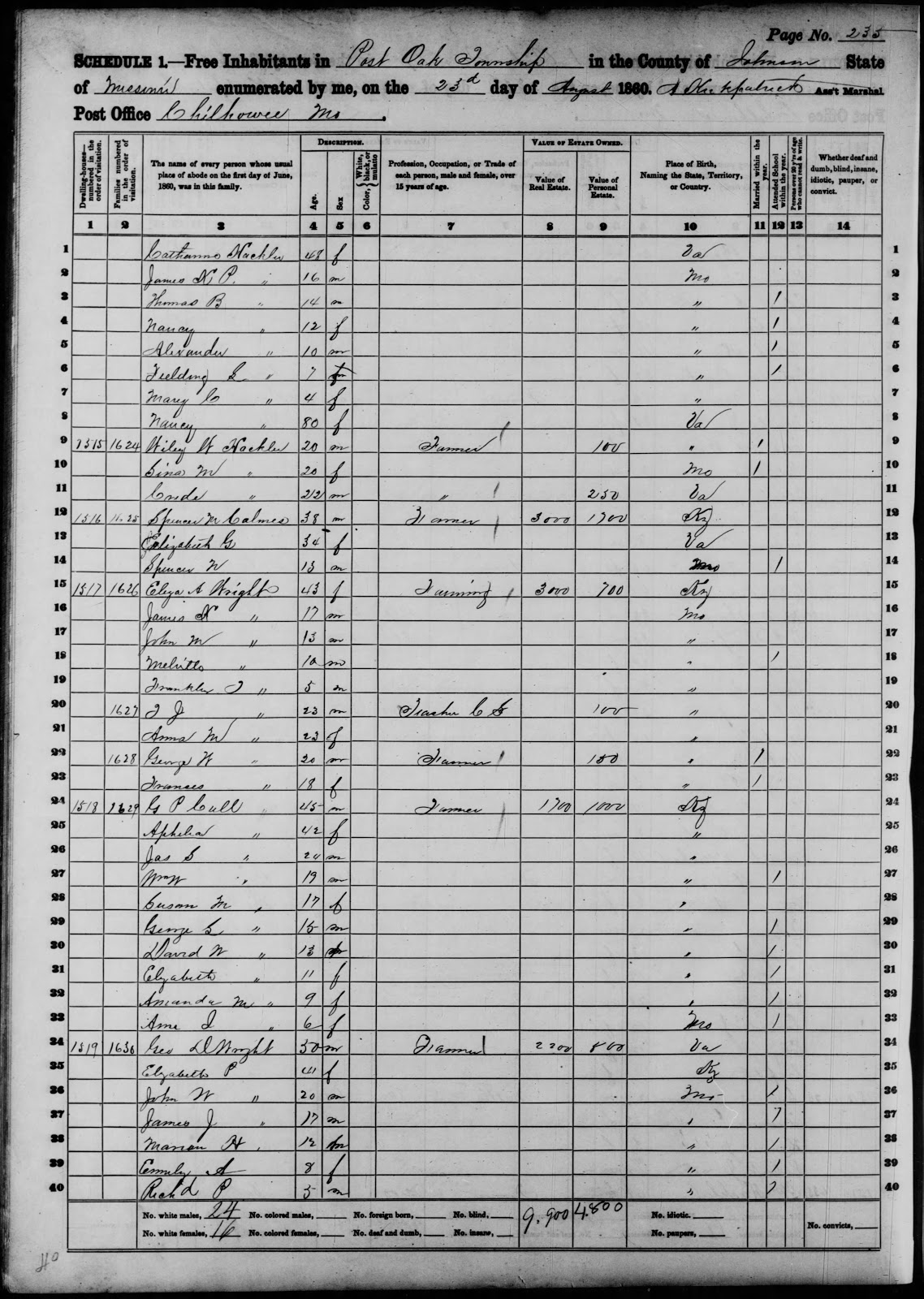 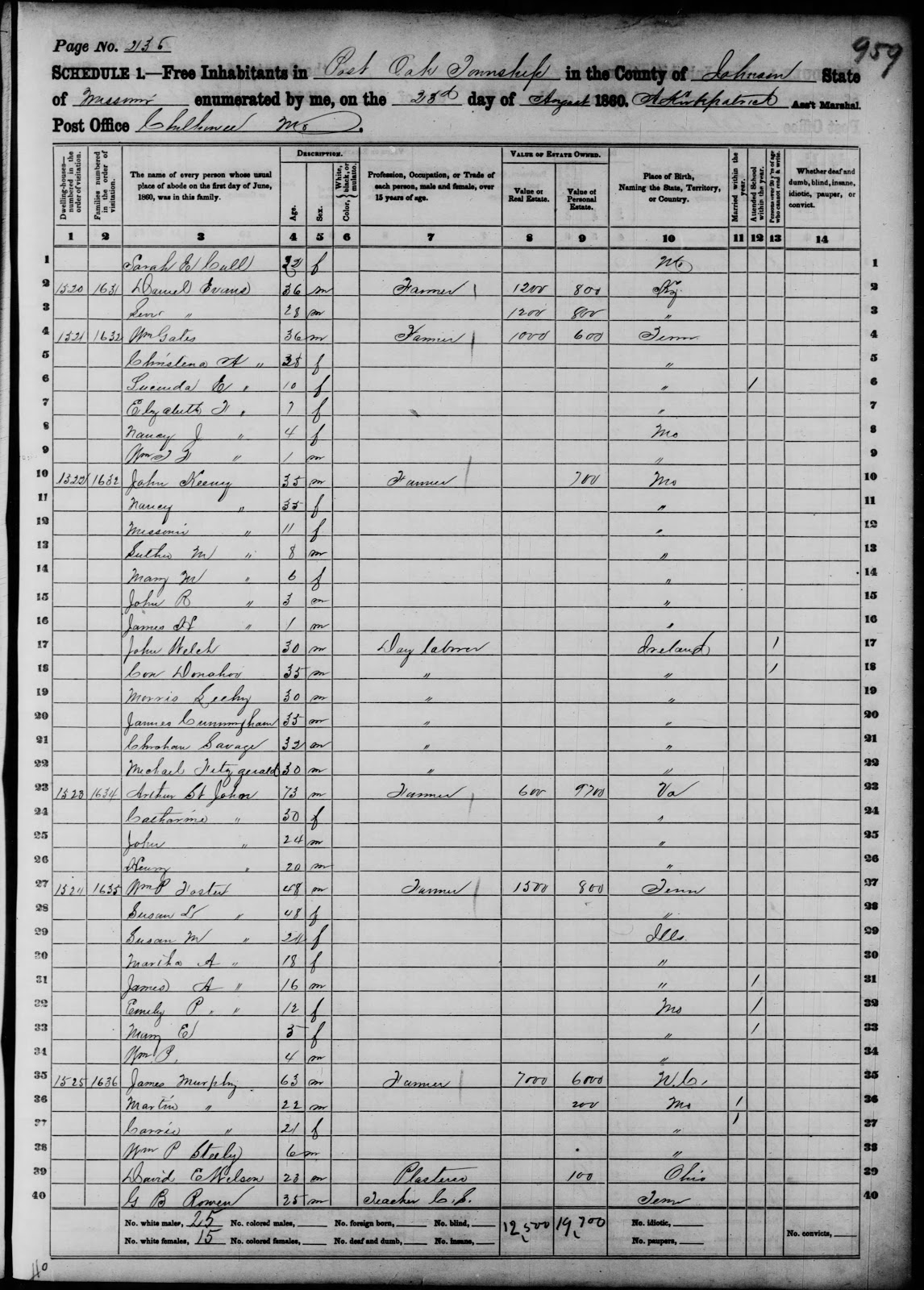 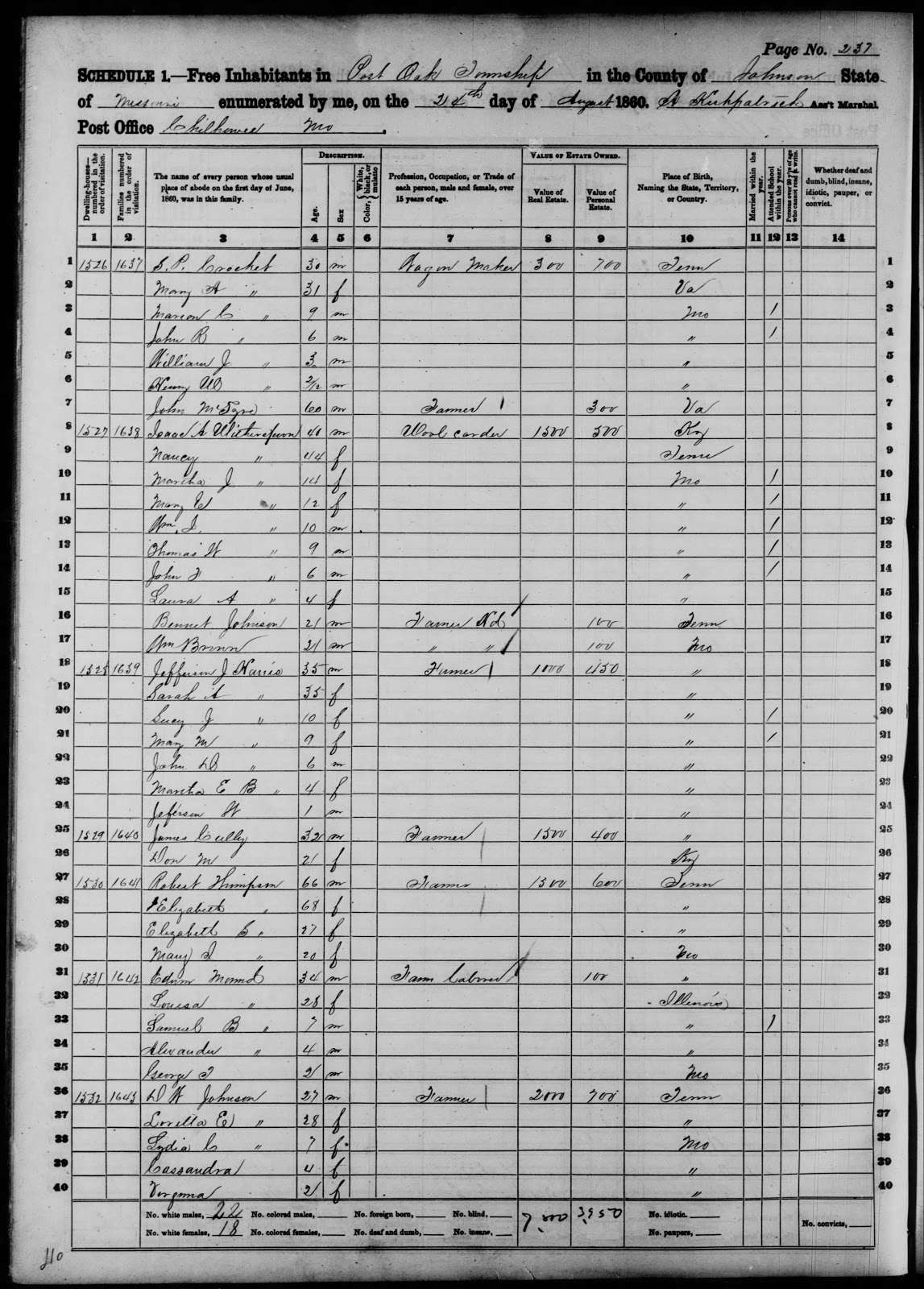 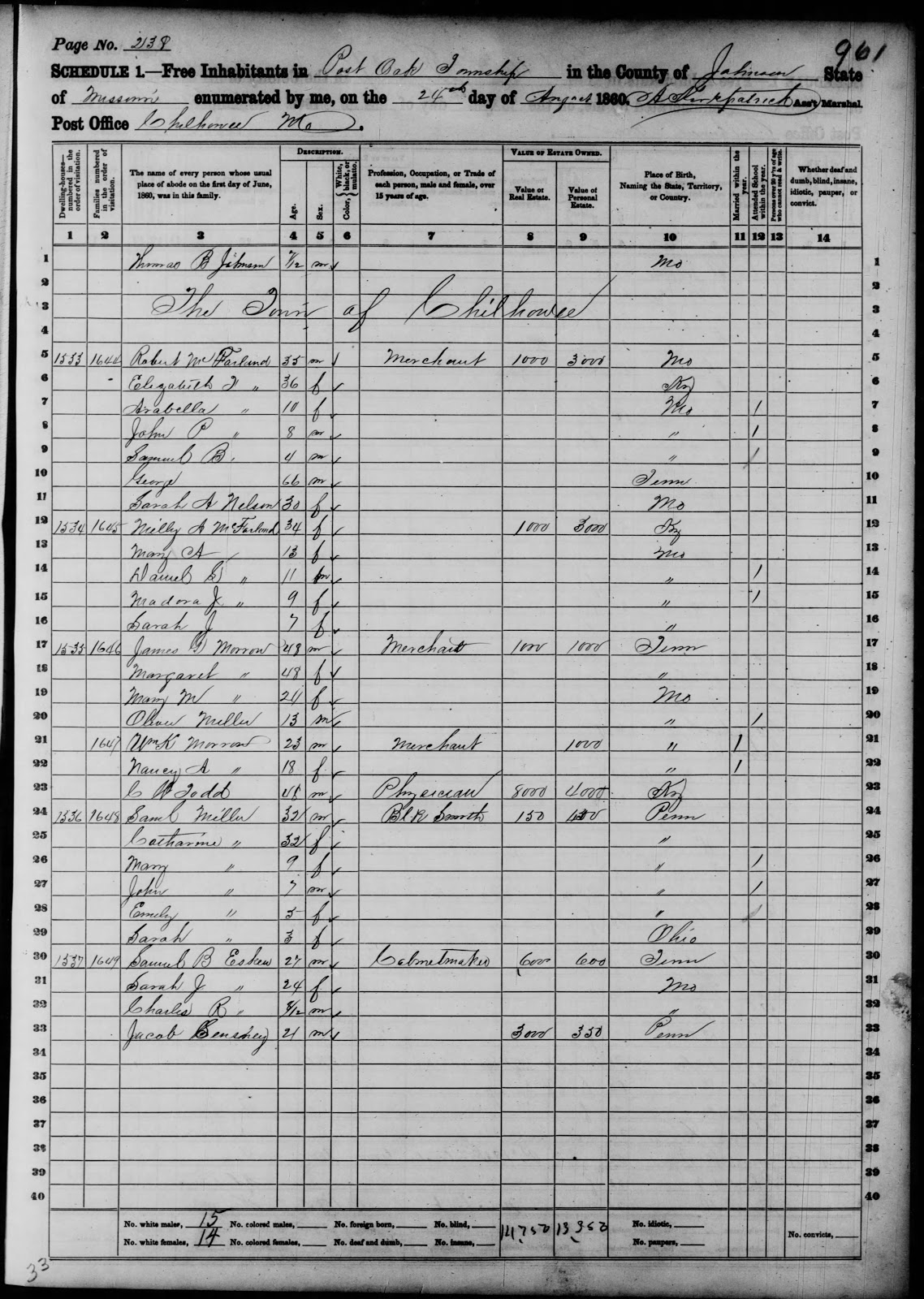 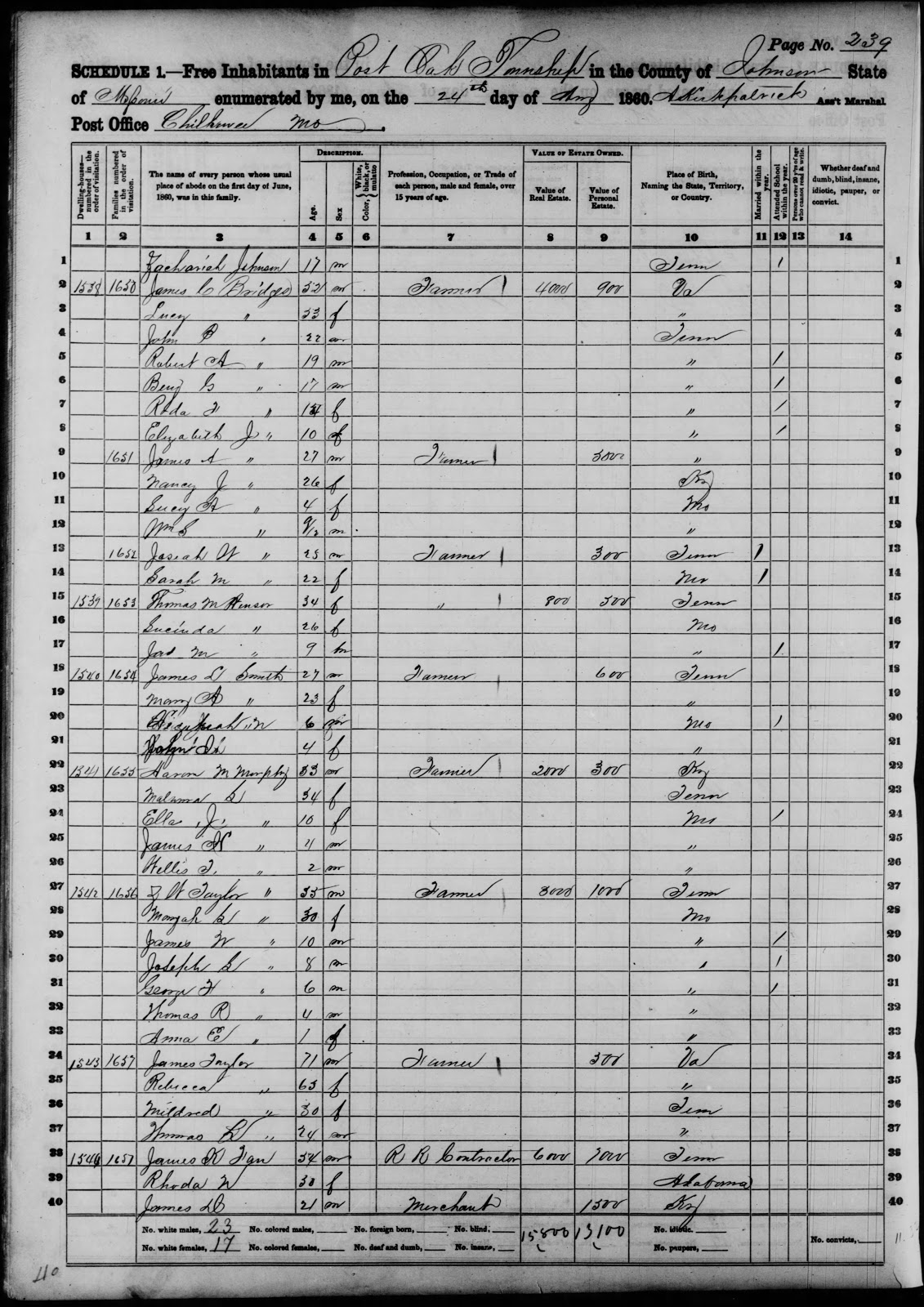 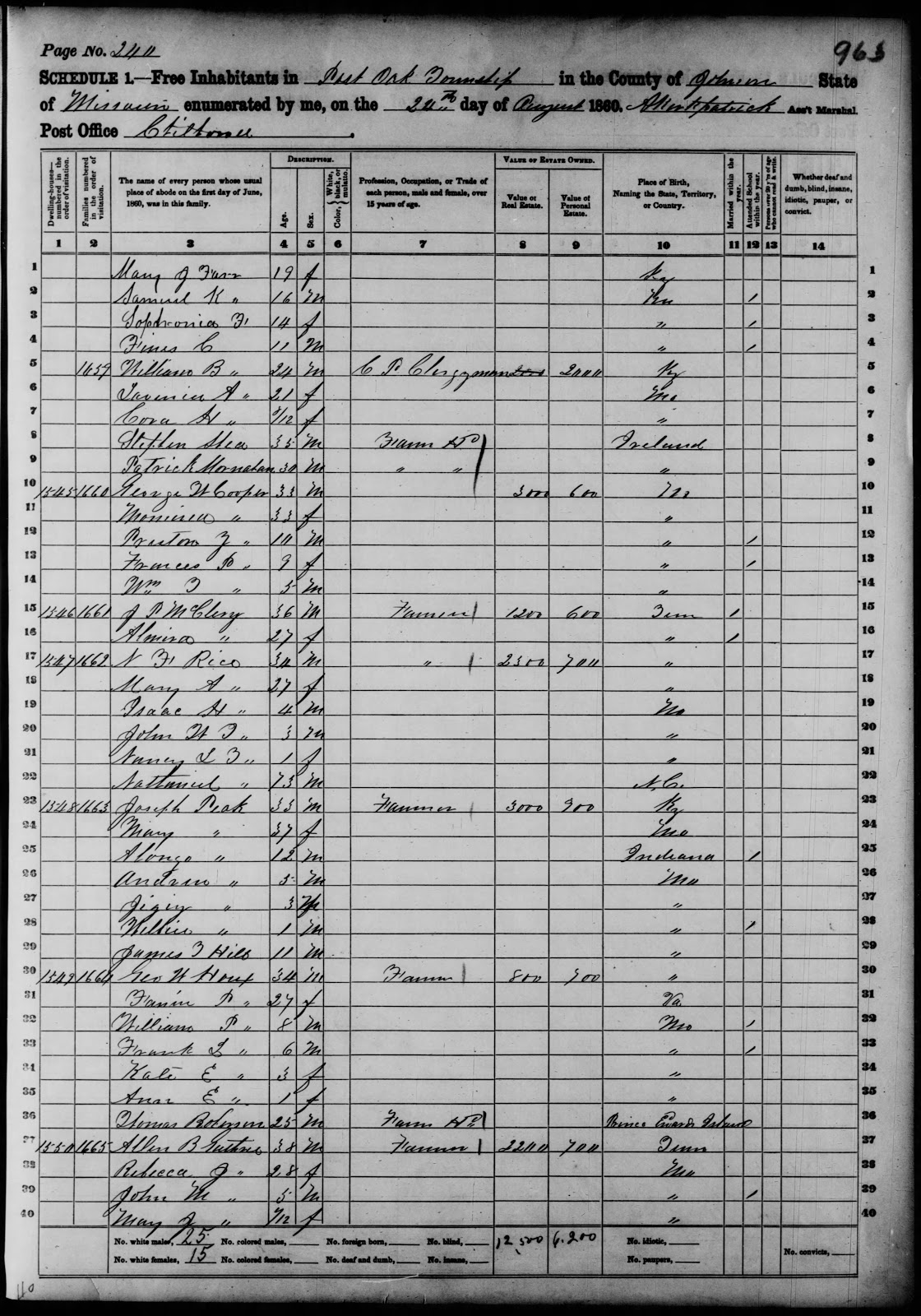 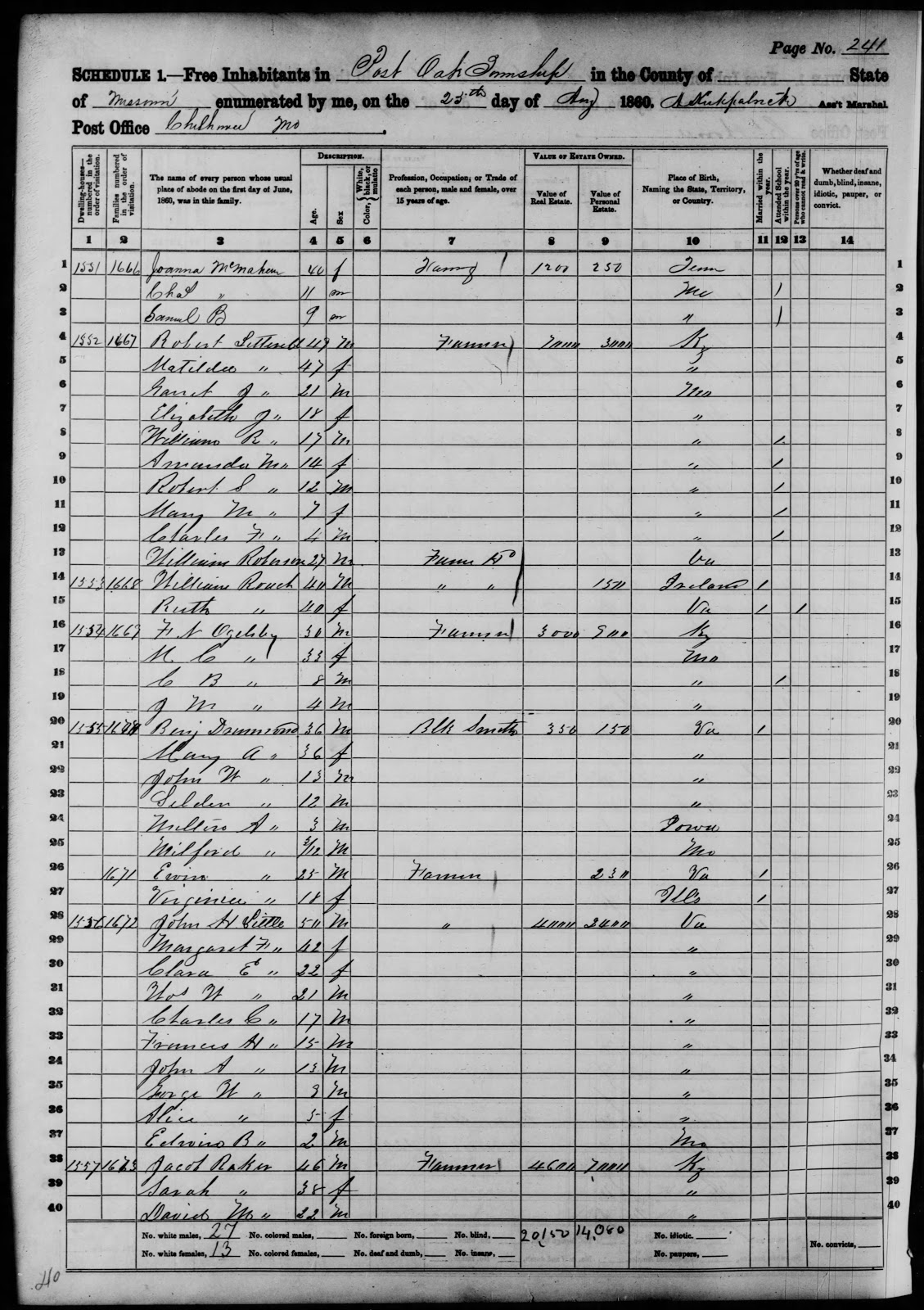 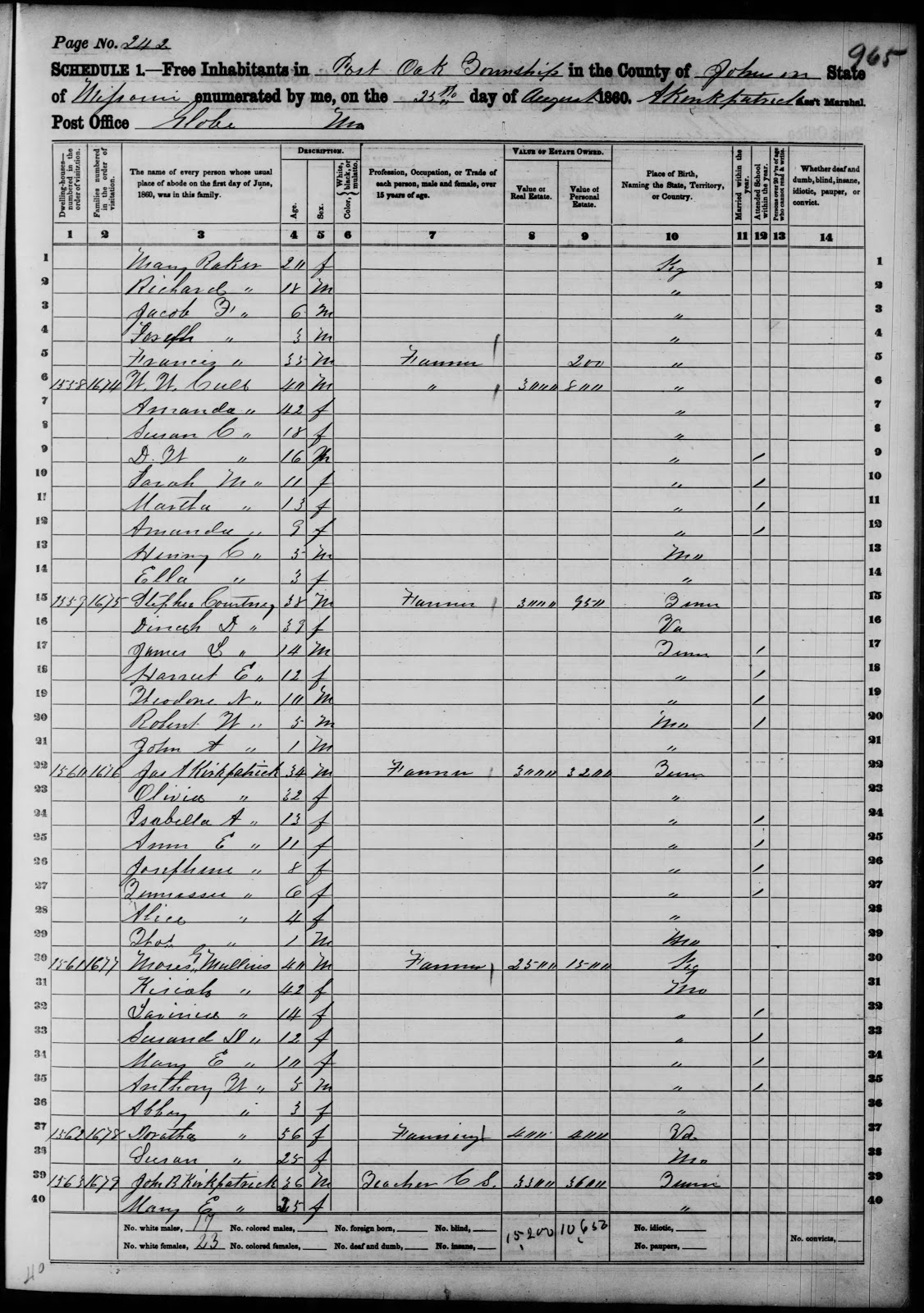 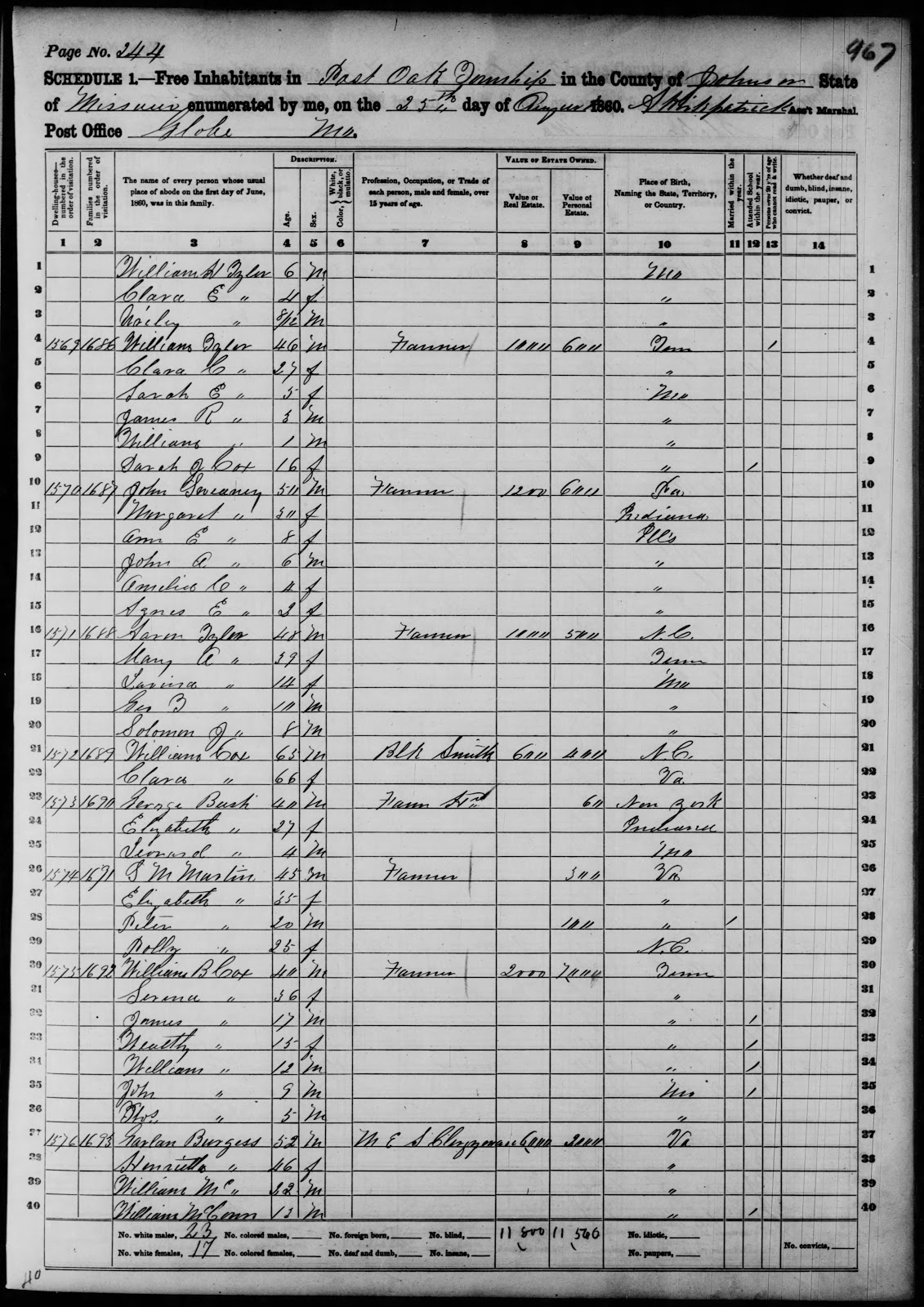 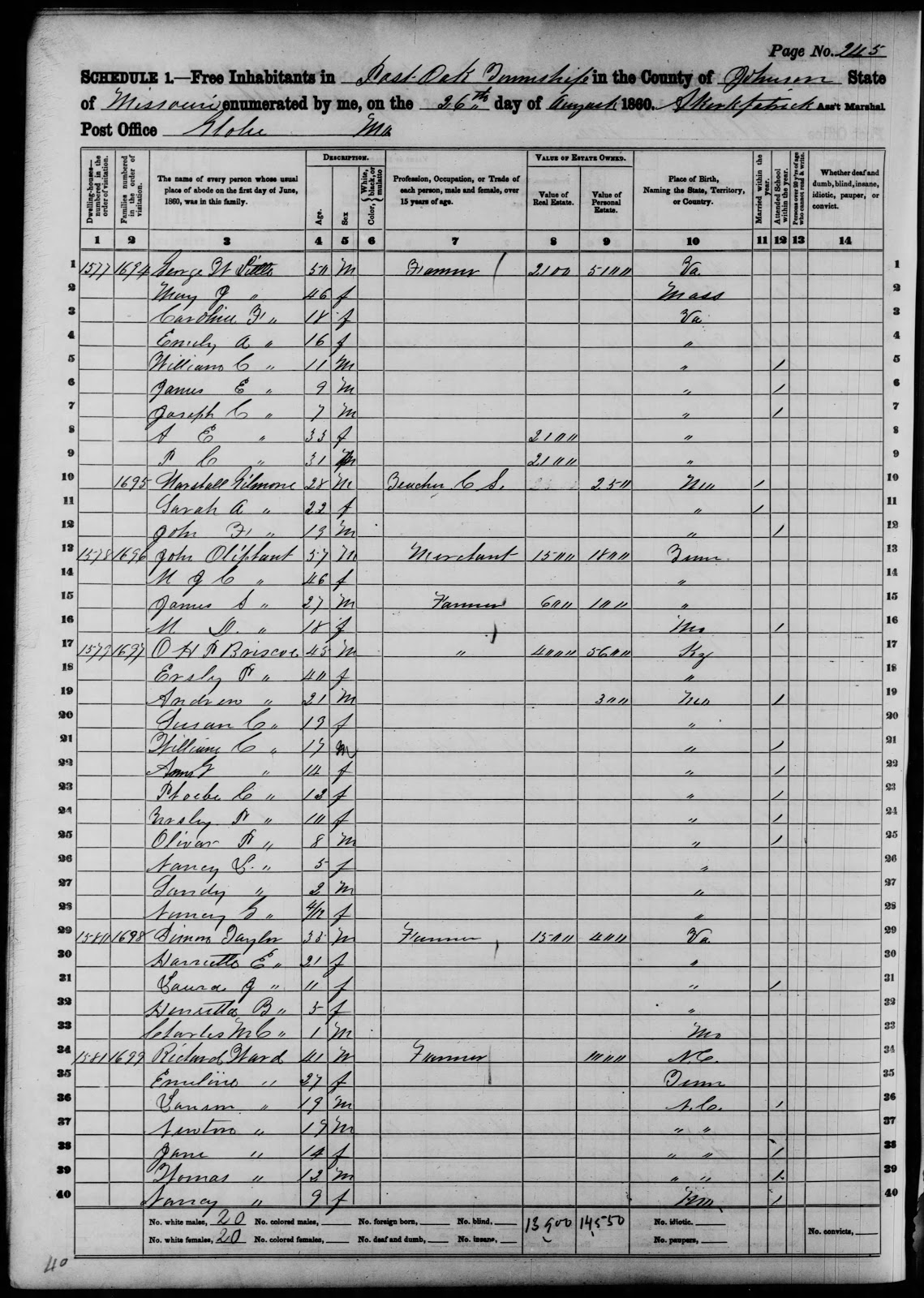 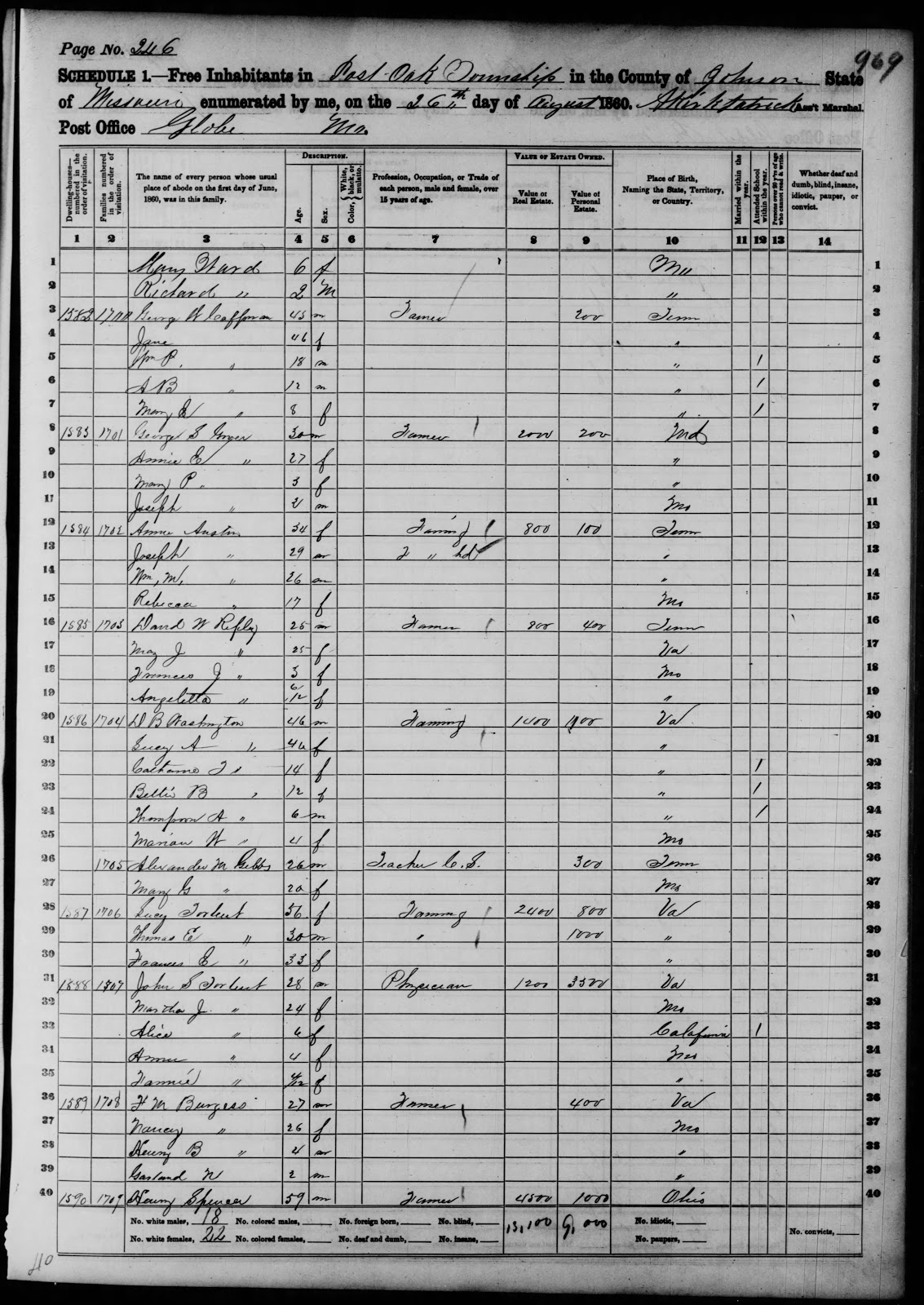 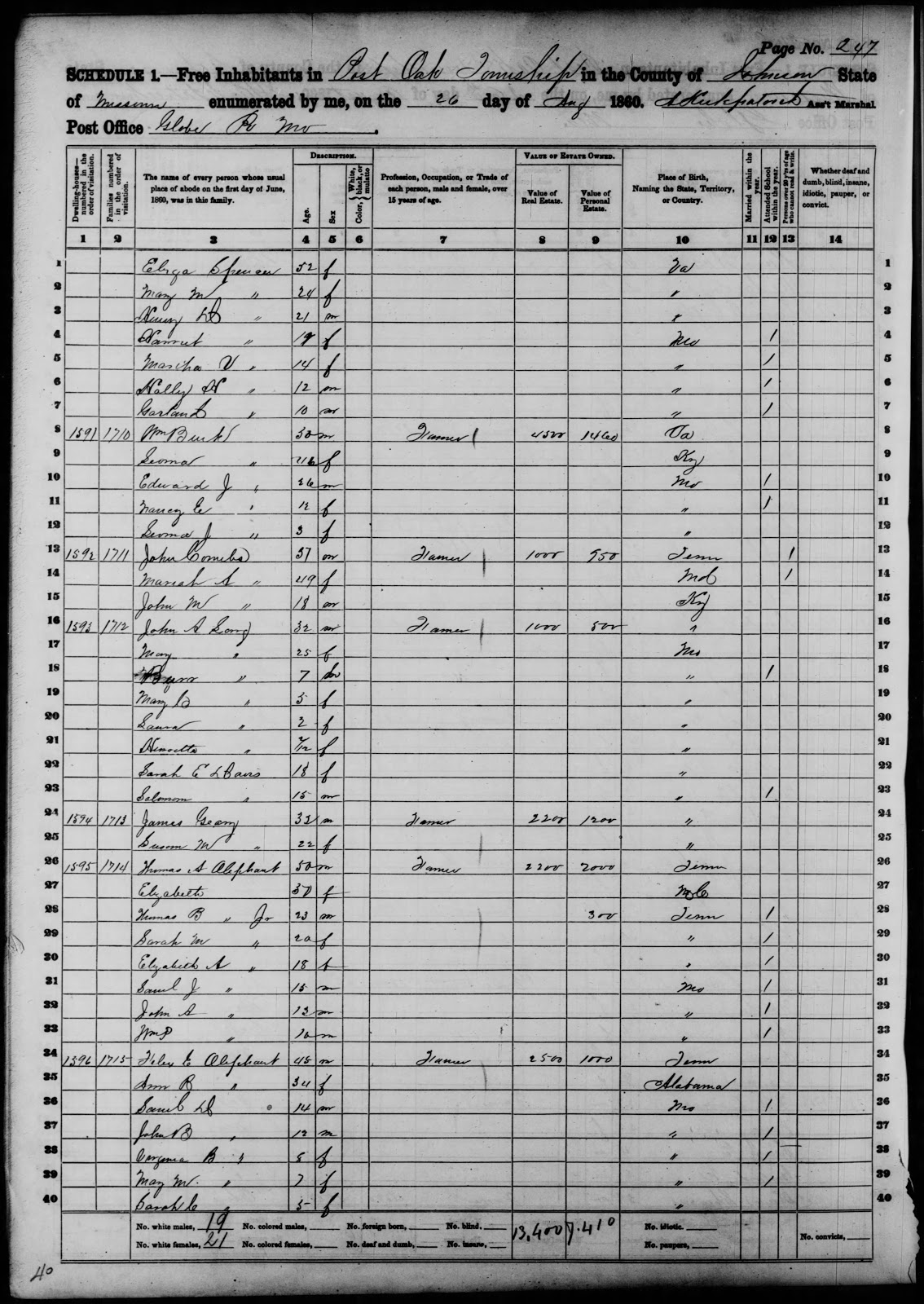 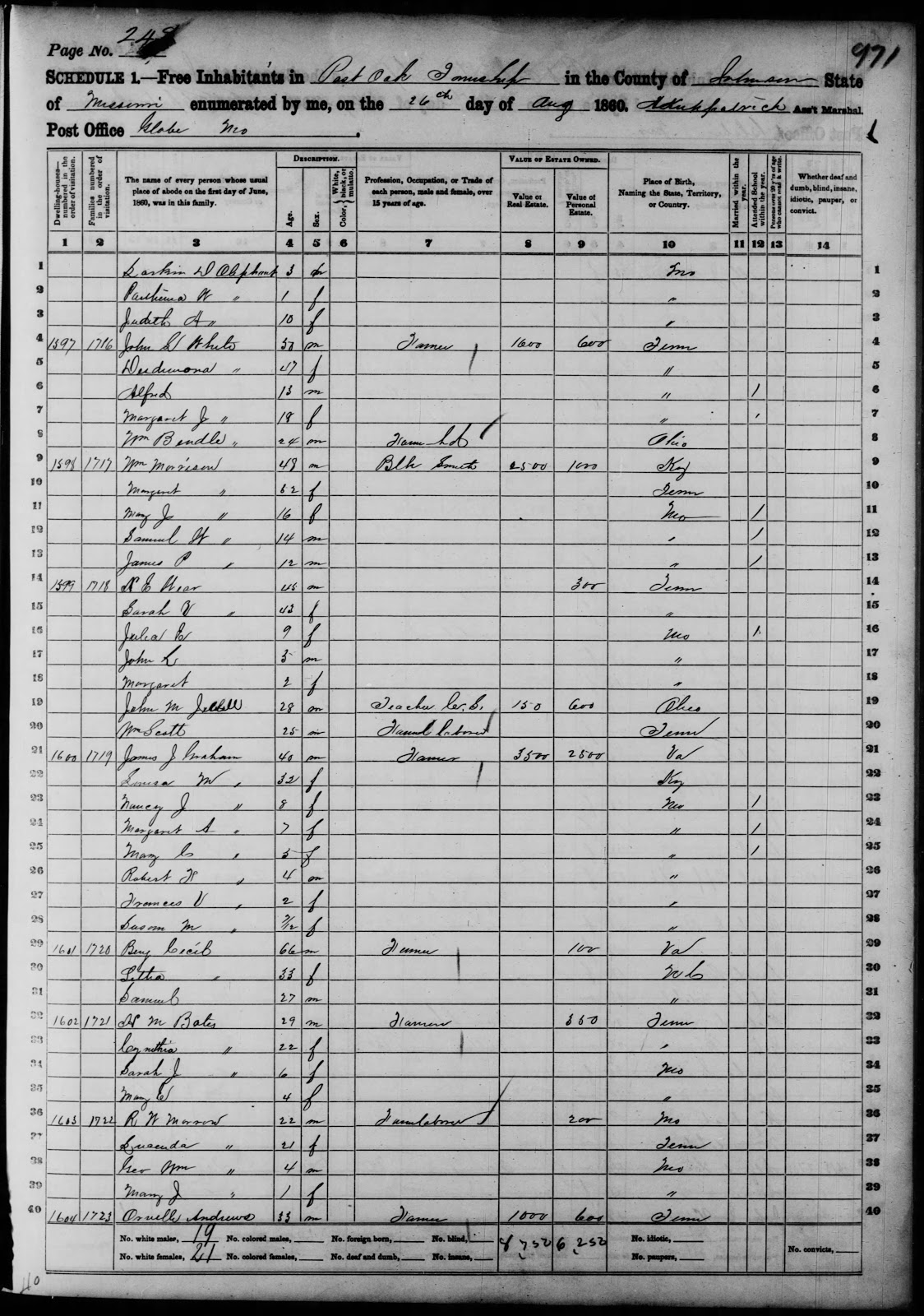 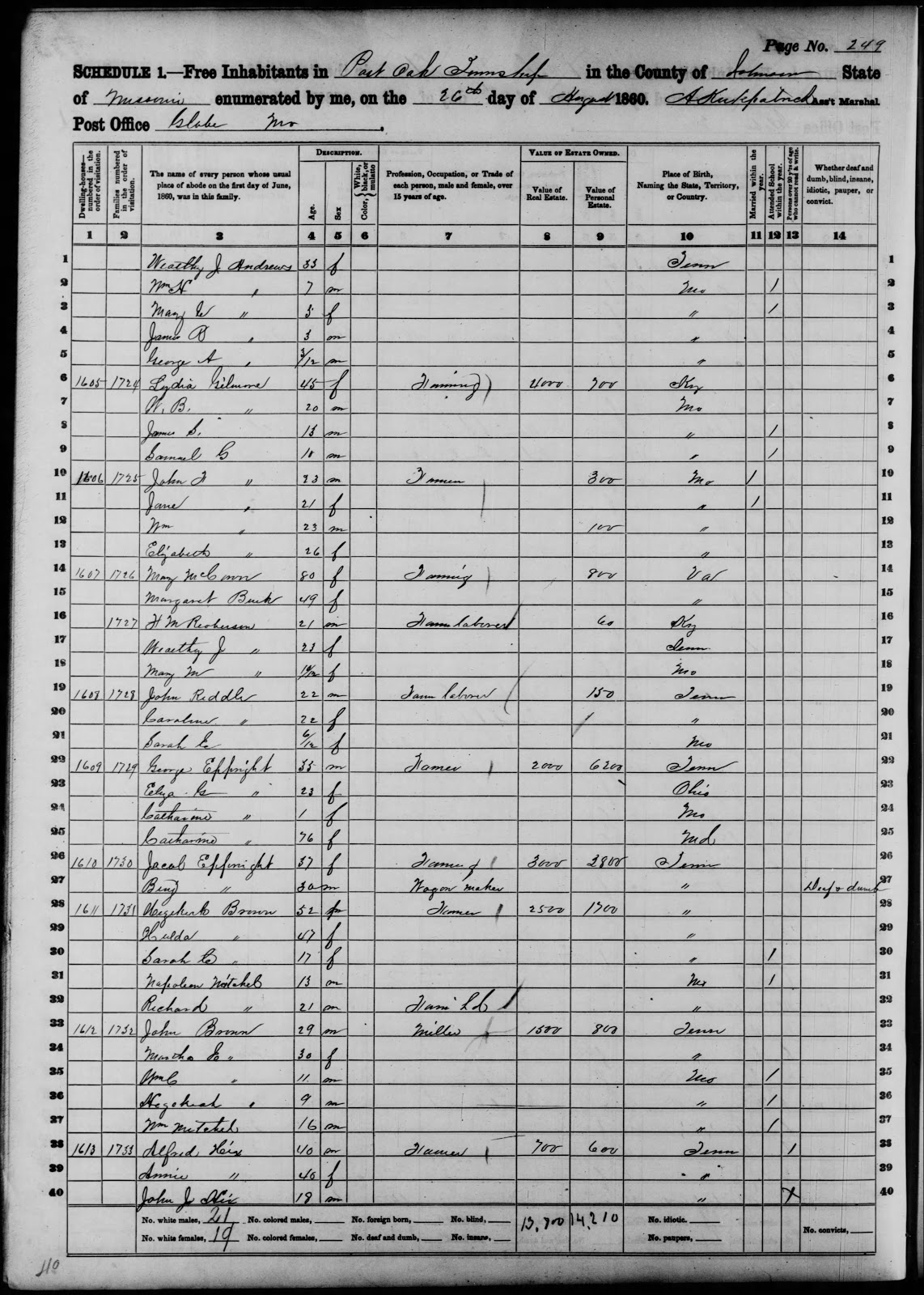 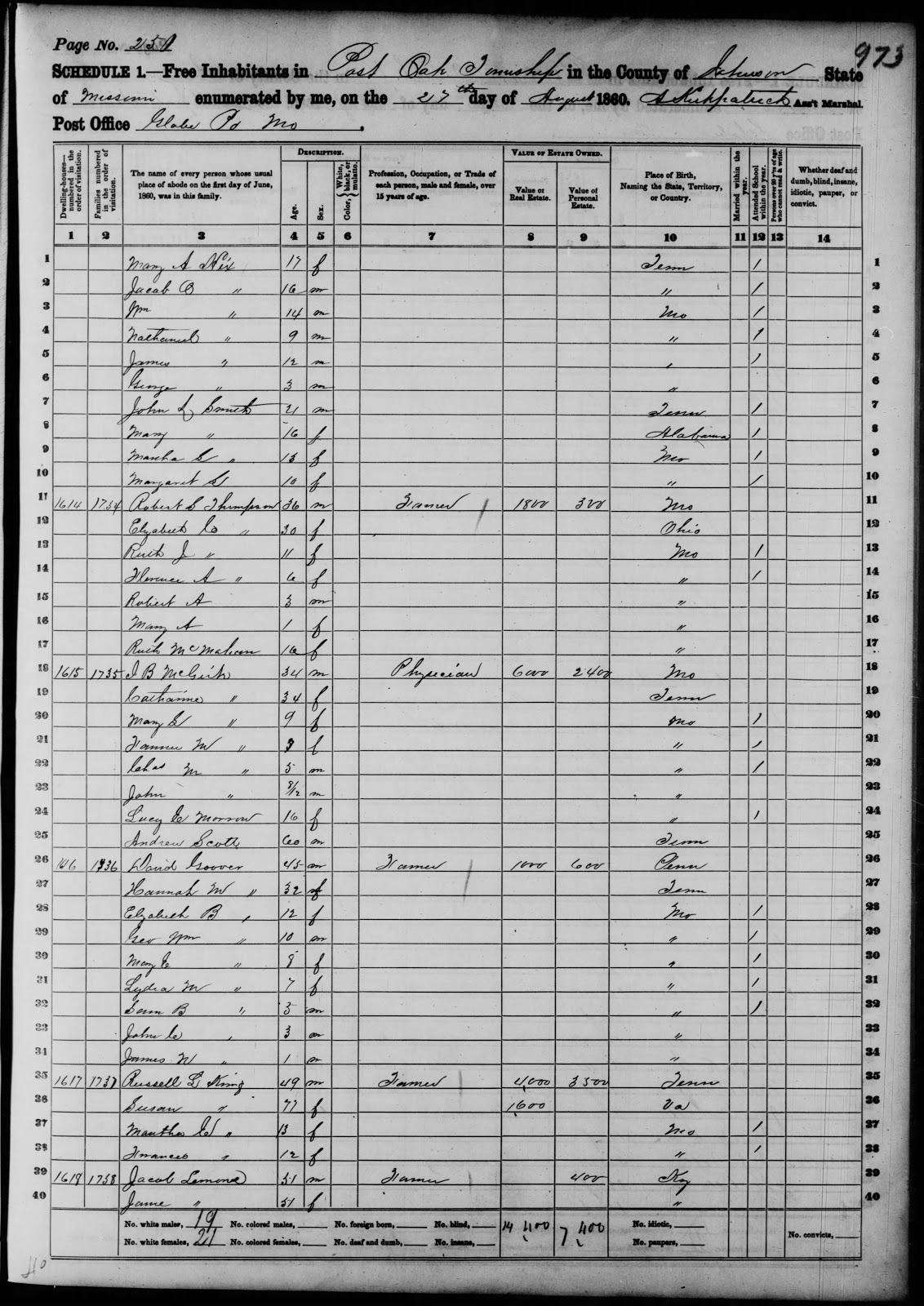 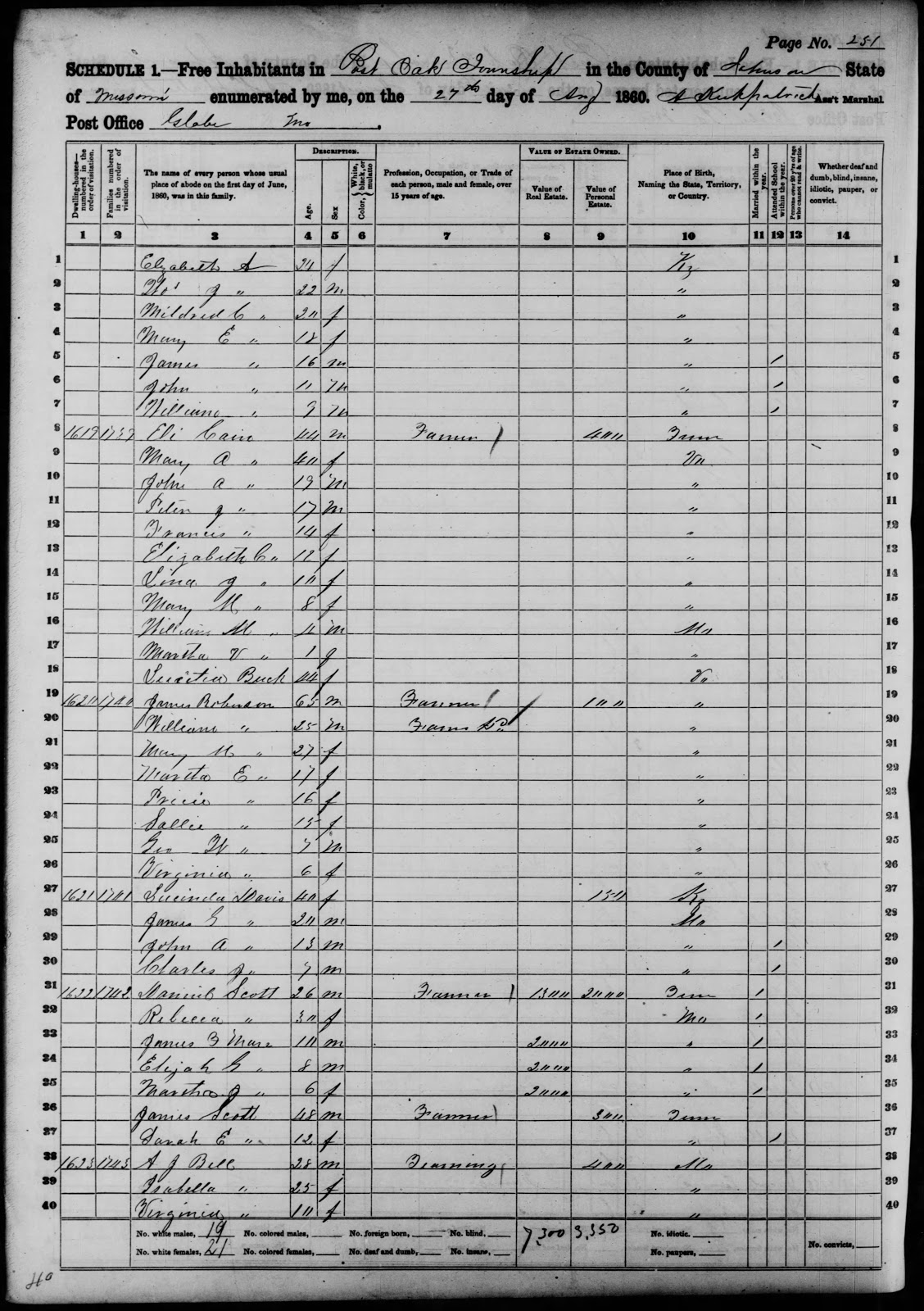 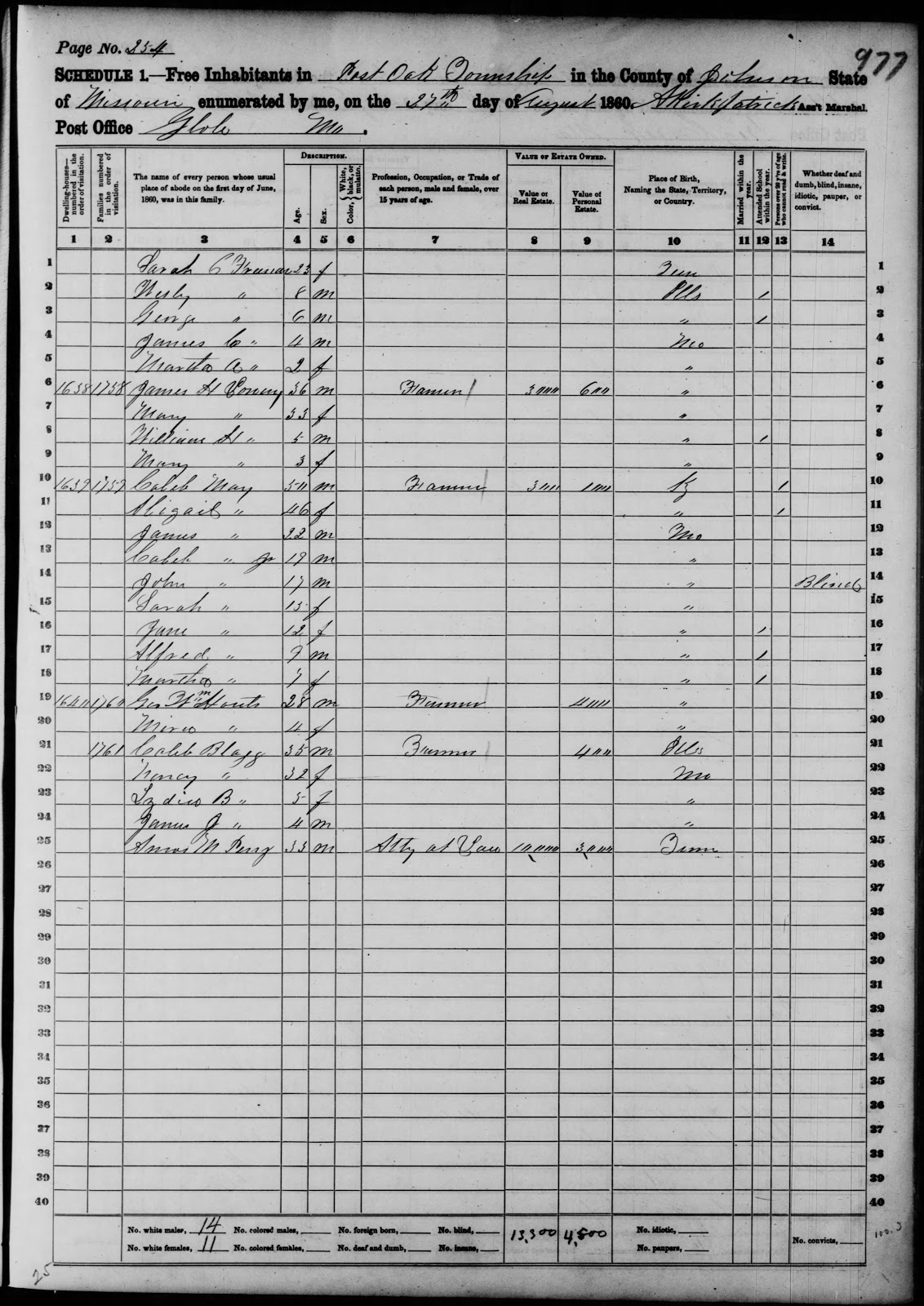 Post Oak township was organized February 14, 1849, off of the south end of Warrensburg township. It was named from Post Oak creek, which received its name from the abundance of post oak timber adjoining the creek.

Geography.-Area, about 69 square miles, or 44,160 acres. Geographically. Post Oak township composes the upland between Post Oak creek and its tributaries on the west and Clear Fork on the east, both these streams heading in a water shed running east and west across the south end of the township. The M. K. & T. and Rock Island railroads occupy this water shed, and Leeton and Post Oak towns are situated on it.

Mills.-When Post Oak township was first settled, the nearest mill was at Lexington, forty miles to the north. A trip there frequently required a week to complete, as the patrons of those pioneer mills were sometimes required to wait one to three days to get their grinding done. Booneville, about sixty-five miles distant on the Missouri river, was the nearest general trading point.

Early Churches.-The early day circuit riders visited the pioneers in this section about the time the settlement became permanent and services were usually held in their homes.

In the fall of 1853, the first camp meeting was held by Rev. Samuel King and R. D. King, of the Cumberland Presbyterian church, in the grove near the residence of Rev. Samuel King.

The first Sunday school was organized in 1849 by Rev. Samuel King, who was superintendent. Maj. James Warnick assisted in the school. It was taught in a little log school house near the site of Shiloh church.

The Shiloh Cumberland Presbyterian church was the first church in the township. It was organized by Rev. R. D. King in 1836. Their first building was erected in 1875, and dedicated by the Rev. J. H. Houx. Some of the pioneer pastors of this denomination here were. Reverends W. Compton, B. F. Thomas. H. R. Smith. J. R. Whitsett, G. V. Ridley, S. Finis King and the first elders were James Harris, John Foster, Robert Thompson, Abner Stewart and R. M. King.

The Christian church was organized in April. 1872, by M. D. Todd, an evangelist, and a substantial frame building was erected the same year about one-half mile east of Cornelia. Dr. J. M. Ward contributed about half of the funds necessary for this building. The following named ministers preached here in the early history of this organization: Elder Hurley. George W. Logan. Benjamin F. Stephens and F. E. Meigs. Some of the original members were A. Louney and family, Allen Jones and wife, John Burnett and wife. Dr. J. M. Ward, Woodson Reavis and wife, William Wiley. William Blakey and wife and John Daugherty and wife.

Harmony Baptist church of Post Oak was organized in 1881 by Rev. A. M. Cockrell. A suitable church building was erected the same year. There were thirty-five original members of this church. This congregation was an offspring of old High Point church in Jefferson township.

Early Cemeteries.-Among the old cemeteries of the township, Shiloh cemetery, was laid out in 1840 and an infant child of James Stewart was buried there the same year. Here also rest the remains of Rev. Samuel King, one of the founders of the Cumberland Presbyterian church. Cornelia cemetery was an old one. The Dunkard cemetery, in section 21. township 44, range 25, was started in 1869. The first burial was that of a child of an emigrant family who were passing through here. Snelling cemetery was established about 1841. Greer cemetery was an early-day burying ground, as was also Mount Zion. Wall cemetery and Greenlee cemetery were family burial grounds and there were a number of other private burial places throughout the township. The first burial occurred in the township in 1837.

Early Postoffices.-Cornelia was the first village and postoffice in the township. James K. Farr and James Morrow built the first houses here in 1853. The town was located in section 36. about eight miles south of Warrensburg. It was named by Dr. Love in honor of his wife who bore the name Cornelia. In the Civil War it was practically burned to the ground by Bill Stewart and his gang. This village was also known by the early settlers as Shanghai and is said to have been so called from the fact that Dr. Love, who lived here, was a chicken fancier and quite extensively engaged in raising a breed of chickens known as Shanghais. Cornelia was a postoffice long before the Civil War and remained one until establishment of rural routes. There have usually been there also a grocery store, blacksmith shop, a public school and two churches.

Post Oak postoffice was established in 1855, about five miles south of Cornelia on what was known as the Warrensburg and Clinton mail route. N. M. Irwin was first postmaster. This town is on the lines of the Chicago, Rock Island & Pacific and the Missouri, Kansas & Texas railroads, which were afterwards built through here, and now has store, blacksmith shop, school house and several residences.

Aubrey postoffice was established in the northeast part of the township in 1875 and J. N. Herring was the postmaster. Stone postoffice, named for that prominent family, also gave service for a while.

Total number of organizations in township is twenty-five.

Leeton. (By Mrs. Mary B. Hamacher.) Leeton. one of the important trading points in the southern part of the county, located on the Missouri, Kansas & Texas and the Rock Island railroad, which parallel each other through this township, came into existence with the advent of the Missouri, Kansas & Texas railroad. The landowners here gave $715 for a depot and four miles of right of way and finally prevailed.

As soon as the location of the station was decided upon, J. J. Lee, H. E. Fewel and R. L. Grinstead purchased about forty-five acres of land and laid out two hundred fifty-eight lots. The plat was recorded October 21, 1895.

The town his wide streets with concrete walks, trees, and parking on either side, unusually well kept lawns, and attractive homes.

The population in 1910 was 420. A consolidated district high school was established by a vote of four to one.