Martha Baile's best memory of Rundle's Drug Store is of sitting at the counter sipping pineapple soda. Buddy Baker remembers when it was called Rundle and Ream and didn't have a counter to sit at and drink soda.


Rundle's evolved over time. It started out at the turn of the 20th century when "Rags" Ream... Well here's his story. 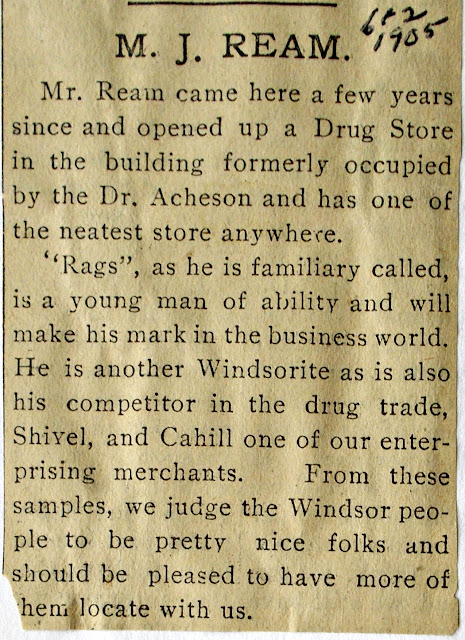 He was a partner with John E. Clark who soon died. About the same time (1903), George O. Rundle came to Warrensburg and purchased the interest of the late Mr. Clark. Thus began the partnership of Rundle and Ream. 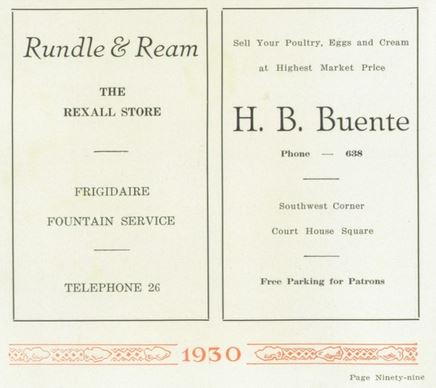 They were still in business together in 1930. Here's their entry in the phone book for that year. 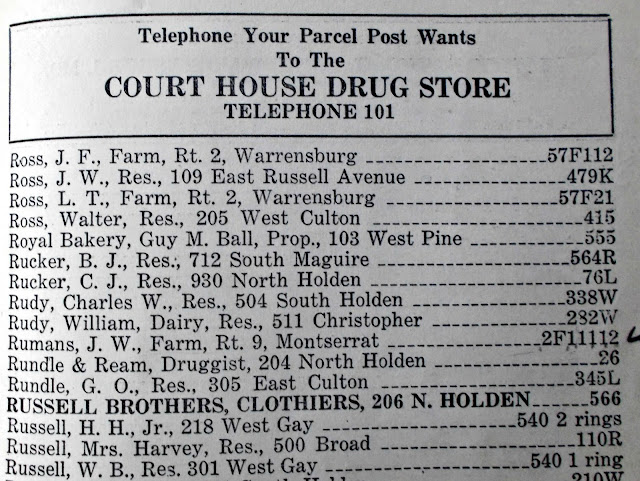 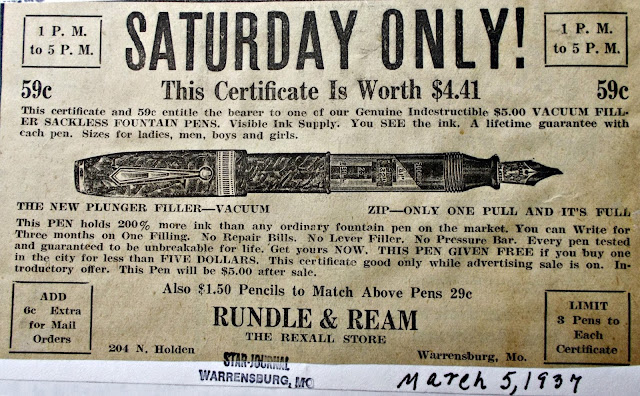 George O. Rundle, died May 8, 1938 and left his half of the drug store to his son Oliver. Here's part of George Rundle's obituary:
The many friends of Mr. Rundle were shocked to learn of his death as few could realize the seriousness of his illness. Mr. Rundle had friends among all classes, business associates, customers, scores of small children and others who appreciated his evident sincerity. Particularly was he liked by sportsmenas many of his spare moments were spent in the out of doors. In spring and summer fishing and in the winter hunting. He was a lover of nature in all its forms and took great pride in Mrs. Rundle's flowers.
Born in Colchester, Ill., he was a son of William and Emma Wakefield Rundle, both of whom were born in England. He entered Hyde Park College in Des Moines, where he graduated in pharmacy. He married Lillian Davis of Manitou in 1909 and they were parents of two children, Oliver, now of Windsor and Elsie who died a few years ago.
Mr. Rundle had a large and varied collection of arrow heads which he had collected upon his fishing excursions. Recently he devoted his spare moments to wood carving and had made three figures which were expecially noteworthy. One, characteristically is a fisherman carrying his basket of fish and his pole and line.
As a measure of respect, the retail committee of the Chamber of Commerce has asked all drug stores to close between 2:15 and 3 o'clock Tuesday afternoon.
George's son Oliver continued the partnership with Mr. Ream until 1942 when he bought out the older man's interest. 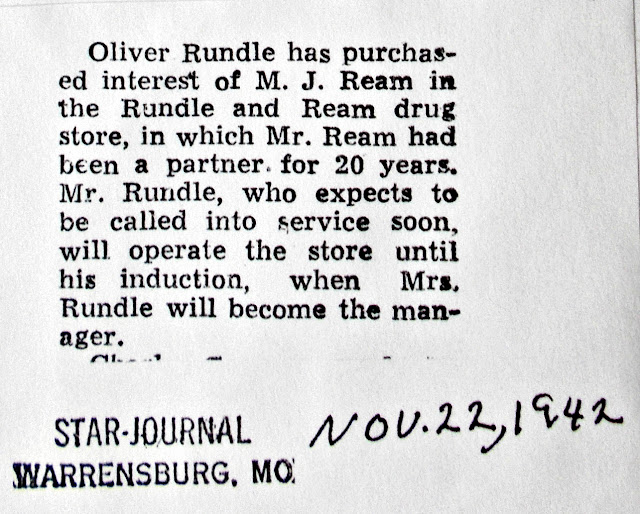 I think the picture below is of Mr. and Mrs. Oliver Rundle. 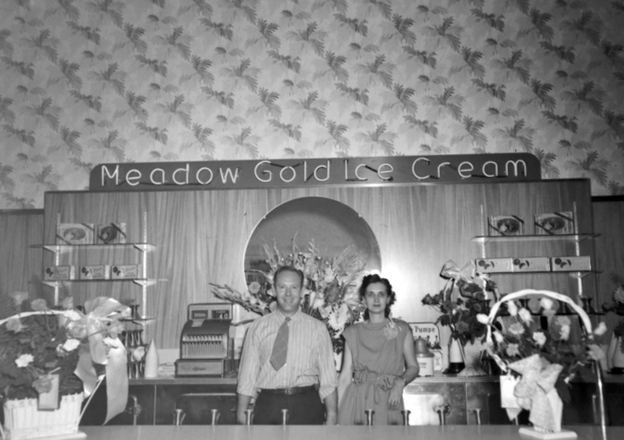 For the next few years the business was known simply as Rundle's Drug Store. 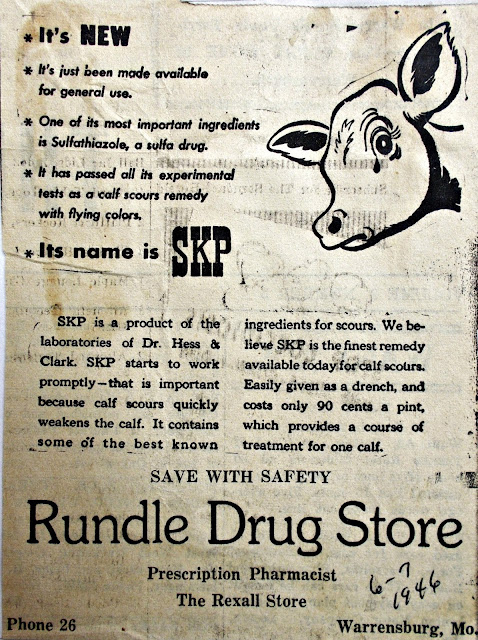 Then it became Rundle Rexall Drug. Here's the 1959 phone book.

Then it closed in 1960. Here's some more pictures of the store developed from negatives found in the Simmon's Studio collection donated by Ben Pierce. 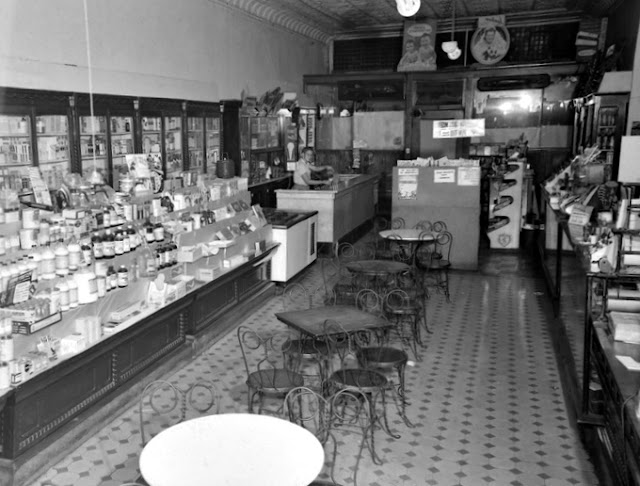 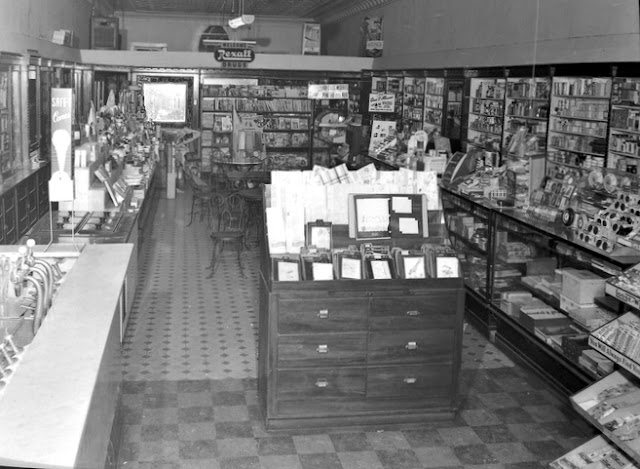 If you have any memories of Rundle Drug Store, please share them in the comments below so they can become part of the history of this long-time Warrensburg business.