During the Civil War, 220,000 African-American soldiers enlisted to fight for the Union. After fighting in the war, the all black 10th Cavalry would continue fighting the Apaches during the 1870's and 1880's and even chase Pancho Villa south of the border during the Wilson administration. Comer, who joined the service at 18 years old (August 1913) against his mother’s wishes, would serve our country in the 10th cavalry during both World Wars. Harry S. Truman awarded Comer the rank of Captain as he became the first African American Captain from Missouri. 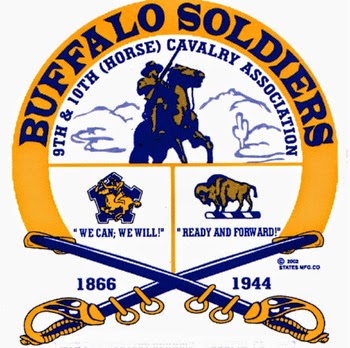 Major Charles Young and fellow officer on Punitive Expedition.
Fort Huachuca Museum
The Mexican Punitive Expedition was the last time that horse-mounted troops would play a significant role in an American military operation. The army was already replacing their old reliable steeds and mules with trucks and automobiles.
The troops were often in the saddle for over seventeen hours a day, riding through rough, irregular terrain in pursuit of Villa. The 10th Cavalry took part in several tactical actions. Near Aguas Calientes, Major Young, now a Squadron Commander, led his troops in an attack on about 150 Villistas, who retreated with the Buffalo Soldiers in pursuit.
At El Mesteno, the opposing forces could not be dislodged by rifle fire. Colonel Brown ordered Major Young to mount up and charge the enemy flank. Young's men dropped back from the firing line, ran to their horses, and mounted up to form a line with pistols drawn. At Major Young's signal, they moved forward at a gallop, threatening to envelop the Villistas' right flank. The troopers didn't fire a shot, but they did start moving faster and yelling. The Villistas refused to meet the charge, ceased firing, and disappeared into the woods. A month later at Hacienda Santa Cruz, Major Young led his squadron to the relief of 13th Cavalry troops, who were in danger of being wiped out. Young's reinforcement prevented a disastrous defeat for these American troops.

Tenth Cavalry charge in Mexico
Fort Huachuca Museum
Another action involving the 10th Cavalry was not successful.
In June of 1916, C Troop and K Troop ran into a trap set by Mexican Federal soldiers near the town of Carrizal. Outnumbered, two officers and ten enlisted men were killed. Twenty-three troopers were taken prisoner.
Fighting back, the Buffalo Soldiers killed forty-five of the Federal soldiers including their commander. In due time the captives were returned to the American command.
By the end of the Punitive Expedition, the 10th Cavalry and three other regiments had penetrated nearly 500 miles into Mexico. Charles Young was promoted to the rank of Lieutenant Colonel in the 10th Cavalry in July of 1916, the second-most senior position in the regiment, and the first time an African American would reach that grade as a "line officer" in the regular army. Six months later, President Wilson, who had campaigned for reelection with the slogan, "He kept us out of war," ended the Punitive Expedition and ordered the troops to return to the United States to begin preparations for the war in Europe.

Buffalo Soldiers Bill Aims To Honor Nation's First Black Army
By TRACIE CONE 06/18/13
SACRAMENTO, Calif. -- In the decades after the Civil War, the nation's first black Army regiments guarded Yosemite and Sequoia national parks against poaching and timber thefts, a role that in hindsight made them some of the United States' first park rangers.
Now as the National Park Service prepares for its 100th anniversary in 2016, there is a move in Congress to formally recognize the role of these "Buffalo Soldiers," who set aside their guns to build the first trail to the top of Mt. Whitney and the first wagon road into the Giant Forest.
On Monday, the U.S. House of Representatives passed a bill by Rep. Jackie Speier, D-San Francisco, allowing the federal government to study creation of a national historic trail along the 280-mile route the soldiers traveled between The Presidio in San Francisco, where they were stationed, and the Sierra Nevada they patrolled.
"This relates to a bigger goal we have – and that is to celebrate the centennial by diversifying our national parks so that they reflect all of our cultural heritages," said Ron Sundergill, senior regional director for the National Parks Conservation Association, which has pushed for the Buffalo Soldiers to be honored.
Companion legislation is being sponsored by California's Democratic senators Dianne Feinstein and Barbara Boxer.
"Many African-Americans don't feel a cultural connection to the national parks because they don't feel a connection to the history," said Yosemite Ranger Shelton Johnson, a historian who interprets the park soldiers' lives. "It's good for the entire country to know that people of color and women made contributions to our parks."
The all African-American regiments were comprised of men from the South who faced limited economic opportunities. Native Americans named them "Buffalo Soldiers" because their curly hair resembled the tuft between the horns of a buffalo.
In times of peace, their mission was tough: to maintain order in a wild and often lawless region of California, while not arousing feelings of racial prejudice. The route they rode took them south through San Jose then over the Diablo Mountains and through the Central Valley.
Supporters hope that recognizing the soldiers leads to a broader awareness of the role African-Americans troops played in protecting resources, as well as fighting wars in Cuba and the Philippines.
"Children learn about Spanish missionaries, the 49ers, and the railroad barons, but how much do they know about the Buffalo Soldiers?" Speier said. "My hope is that their remarkable service to this country takes its rightful place alongside other great stories from the San Francisco Bay."
In 1896 Pershing was assigned to the frontier with the Tenth Cavalry, an all-black regiment. The Native Americans called these troops buffalo soldiers because they believed the soldiers’ hair resembled that of a buffalo. At the time, blacks were segregated from whites in the military.
Pershing was then assigned to teach at West Point. Here he was given the nickname “Black Jack” because he had spent time with the Tenth Cavalry. When the Spanish-American War broke out, Pershing was selected to command the Tenth Cavalry once more and led his men in Cuba at the Battle of San Juan Hill. The bravery and courage shown by the men of the Tenth Cavalry earned them Pershing’s respect and admiration. He often praised the black soldiers to others, an unusual thing to do during this time. 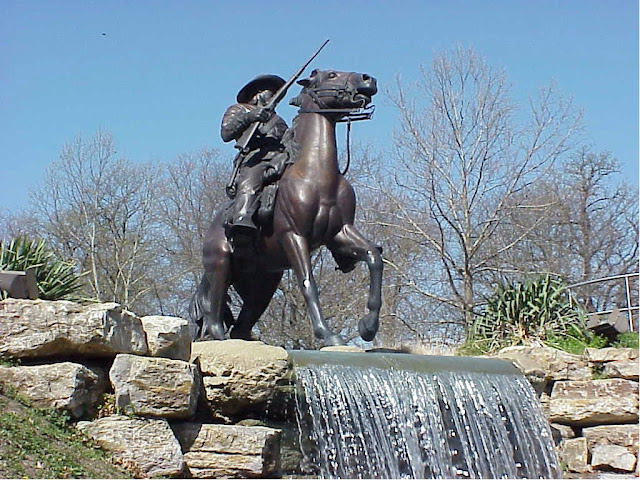 A memorial monument to the Buffalo Soldiers stands at Fort Leavenworth, Kansas, facing west on a bluff overlooking the Missouri River. At the statue's dedication in 1993, then Chairman of the Joint Chiefs of Staff, General Colin Powell, said, "There he is, the Buffalo Soldier on horseback, in his coat of blue, eagles on his buttons, crossed sabers on his canteen, rifle in hand, pistol on hip, brave, iron-willed, every bit the soldier that his white brother was. African Americans had answered the country's every call from its infancy, yet the fame and fortune that were their just due never came. For their blood spent, lives lost, and battles won, they received nothing. They went back to slavery, real or economic, consigned there by hate, prejudice, bigotry, and intolerance. . . I am deeply mindful of the debt I owe to those who went before me…don't forget their service and sacrifice."

“Buffalo Soldier” is the collective nickname given to the first African-American members of the U.S. Armed Forces. The Buffalo Soldiers, originally the 9th 10th, 24th, and 25th U.S. Military regiments, were common figures around the U.S./Mexico border during the turn of the century. Henry Flipper, the first African-American graduate of the U.S. Military Academy (1877), and Charles Young, an officer of the 9th and 10th Cavalries and the 25th Infantry, both spent time patrolling the barely tamed outpost of Fort Huachuca.

Fort Huachuca was the onetime home of every regiment of the original Buffalo Soldiers, starting in 1892, with the arrival of companies from the 24th Infantry. (The 24th and 25th Infantries were consolidated from the 38th, 39th, 40th, and 41st Infantries.) The 10th Cavalry arrived at Fort Huachuca in December 1913 and stayed for eighteen years. The 10th Cavalry is thought to be the regiment which established the name "Buffalo Soldiers." History holds that the Native American tribes they fought (likely Comanche or Cheyenne) compared their fighting to that of the mighty buffalo and likened the texture of their hair to the Buffalo’s mane.

The Seige of Naco, Sonora

In October, 1914, members of the 9th and 10th Cavalries entrenched themselves on the border during a battle between rebel Mexicans and Mexican federal troops in Naco, Sonora. The troops maintained order without firing for two and a half months, earning a special letter of commendation from President Wilson.

The Battle of Ambos Nogales

In August of 1918, armed Mexican troops were seen in Nogales, Sonora with several men thought to be advisors to the German military (U.S. enemies during World War I).  It appeared that Germans were planning an attack on Nogales using Mexican forces. On August 27, 1918, members of the 10th Cavalry and the 35th Infantry briefly exchanged sniper fire across the international border—the only World War I battle fought on American soil. 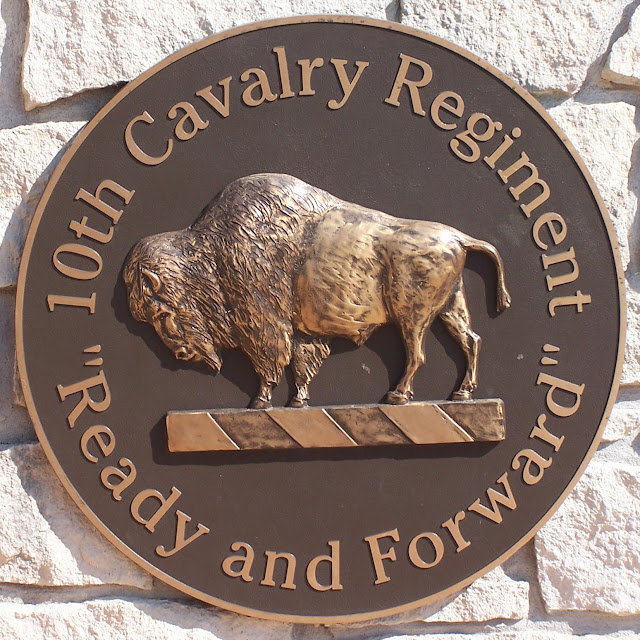 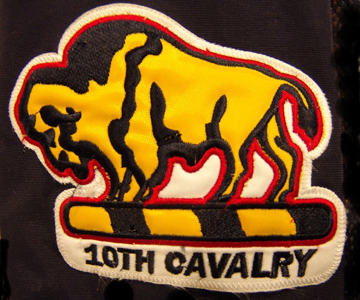 Wife - Della Comer lived in Cochise County, Arizona in 1920. She was the head of the household's wife, 27 years old, and identified as black. Della was born in Texas around 1893, and both of her parents were born in Texas as well. In 1920, Della was married to Readic Comer. She could read and write.

This is wonderful. I had no idea how complex the history of the Buffalo Soldiers were. Missing this history makes me feel cheated. Thank you for posting this.