(November 20, 1881 – August 18, 1968) was an African-American composer and performer of ragtime music.
Biography
Marshall was born on a farm in Saline County, Missouri, the son of Emily Marshall, a washerwoman, and Edward Marshall, who had no discernible career, on November 20, 1881. A few years later his family moved to Sedalia, Missouri because black children were allowed to attend school nine months a year there as opposed to the three months allowed blacks elsewhere, and the Sedalia townspeople were reportedly more acceptable of African Americans. The Marshalls lived at 135 West Henry Street. Marshall attended elementary school in Sedalia. He was only fifteen years old when Scott Joplin first arrived in Sedalia. Joplin took up residence with the Marshall family, and before long both Marshall and Scott Hayden, a Lincoln High School classmate of Marshall, became Joplin's protégés.
Marshall had already taken some private lessons in classical music years before, and was versed with piano technique and a gift for syncopation. Joplin also helped get Marshall a job at the Maple Leaf Club during its single year of existence in 1899. 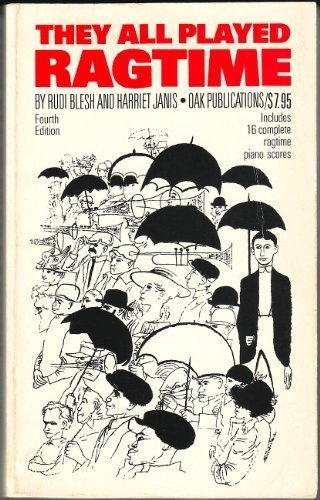 In the club on October 1, 1899, Marshall got into a fight with a young man named Ernst Edwards over Edwards's girlfriend. They took their fight outside, Marshall pummeled Edwards with his cane, Edwards drew a gun, and Marshall ran away
Click to hear this tune - on youtube
At Joplin's suggestion, Marshall then continued to study music at George R. Smith College, 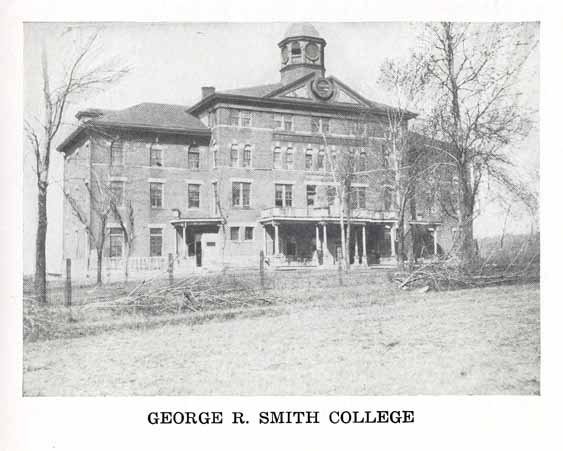 learning music theory. Marshall graduated from the Teacher's Institute with a teaching license, however, it seems that he chose to pursue a career as a performer.

He earned a reputation as an outstanding local musician. While still in college, he traveled with McCabe's Minstrels for nearly two years, playing during intermissions. Marshall also helped cover his school expenses by playing ragtime in public venues and for dances and special occasions.
Susan Cordell Playing Arthur Marshall's Ham and !
He also played where work was available; in the brothels, where substantial tips regularly exceeded his standard wage by a great deal.
During 1901 and 1902, Marshall lived in the Joplin home in St. Louis, along with Scott Hayden, Hayden's wife Nora, Joplin's wife Belle, and Joplin's brother Will. During this time, Nora and Will died.
Watch John Reed Torres Play Arthur Marshall's Kinklets from 1906

Marshall continued to play in various tours and contests, both in St. Louis and at places such as Chicago. In 1903, despite flagrant racial discrimination, Marshall worked at the Louisiana Purchase Exposition (St. Louis World's Fair), playing piano at the Spanish Cafe where he earned $12 per week plus tips until he was replaced by a band.
At some point after mid-1905, he moved with his wife to Chicago. They lived in an apartment at 2900 South State Street above Beau Baum's Saloon, across the street from the Pekin Theater. Marshall played at several local spots; the Wintergarden at 3047 South State Street, Lewis's Saloon and the Eureka Saloon. 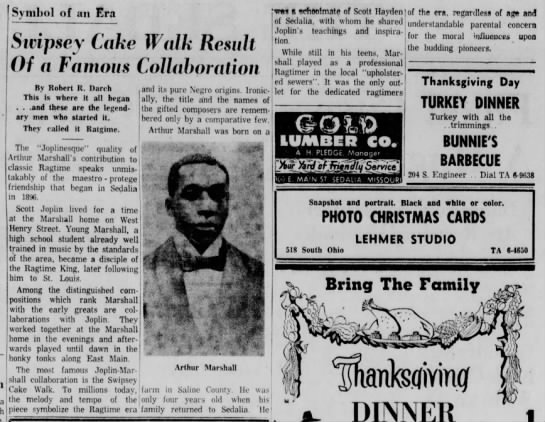 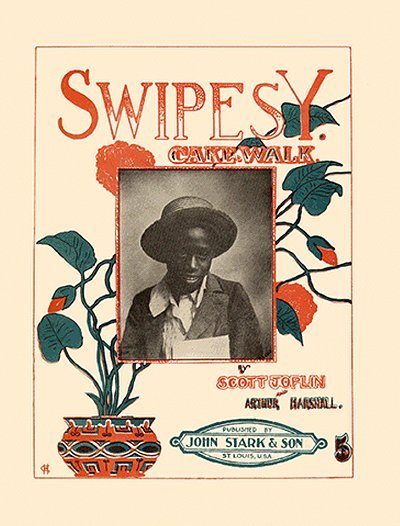 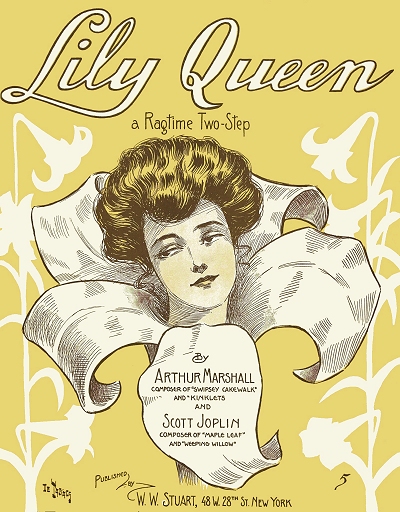 and produced several solo efforts, including "Kinklets", "Ham and !", and "The Peach". It appears that for these three solo compositions Marshall received $50 and 3-cent royalties from his publisher John Stillwell Stark, a deal which Marshall felt was fair. However, he struggled to come to terms with Stark in 1906, possibly for his rag "The Pippin", 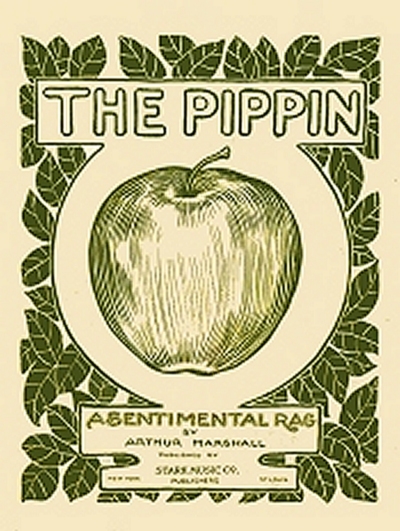 Click on the Peach to listen
and finally settled on a non-royalty offer of $10 and 200 copies of the music.

"For a few short years Scott Joplin lived here and began writing what would not only become America’s popular music, but America’s premier classical music as well. His “Maple Leaf Rag,” published here in 1899, ranks Joplin among the great composers our nation has produced. Thanks to him, Sedalia can call itself a place where America’s music began!"

Marshall retired from the music business in 1917, but later in life he participated in ragtime revivals. Arthur Marshall died in Kansas City, Missouri. Gravesite Link 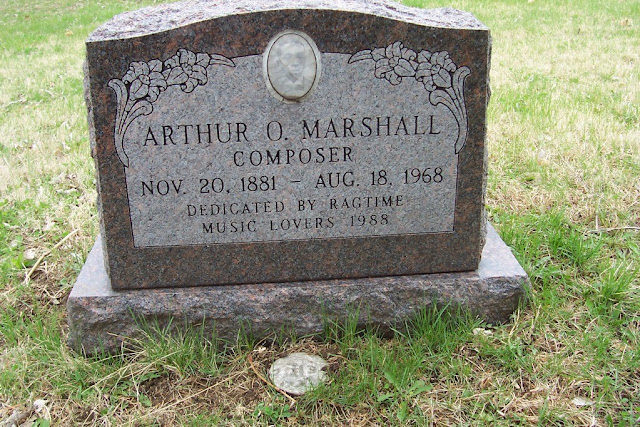 Arthur O. Marshall, Composer, Highland Cemetery - Kansas City, MO
Personal
Marshall apparently married four times during his life.
Latisha (or Letitia) Howell, in St. Louis circa 1904
Maude McMannes, in St. Louis
Julia Jackson, in Chicago, with whom he had three children, two girls (one being Mildred Steward) and one boy. Julia died in childbirth in 1916.
Odell Dillard (Childs), in Kansas City on November 25, 1919
Thanks to Mr. Marshall's great-nephew Aaron Johnson for pictures and inspiration.