The Cord building, built by C.W. (Charles William) Cord, 1854-1911, a Warrensburg grocer, displays many features of Romanesque Revival architecture which was popular in the U.S. in the 19th century.
Romanesque Revival is a blanket term which includes Victorian Italianate as a subset.  For that reason, the Cord building and the Masonic Temple share many similar architectural features. For a look at the Masonic building see: Link to Masonic Temple Pictures
For example, the arched windows on the second floor and the heavily bracketed cornices on the Cord Building are very much like those on the Masonic building at the corner of Market and Holden. 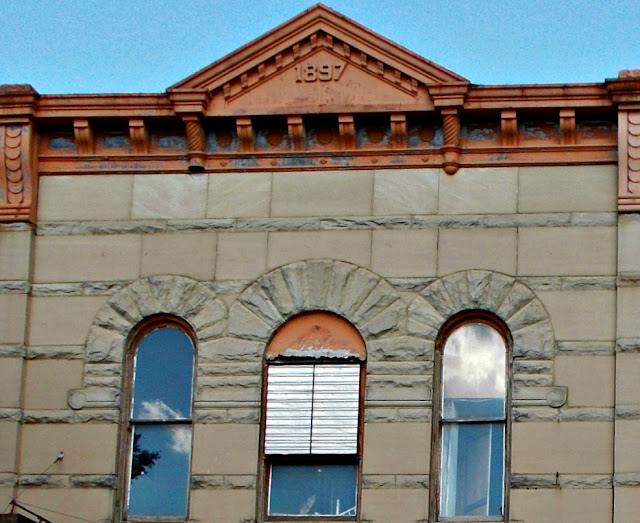 The windowsills end in scroll work (volutes) much like those at the Masonic Temple. However, the features on the Cord building do not stand out from the building as far as those on the Masonic Temple. For this reason, the voussoirs (wedge shaped stones that make up an arch), volutes, and other rock features are intact.  Although this building is only four years younger than the Masonic Temple, the stone face has suffered relatively little deterioration. 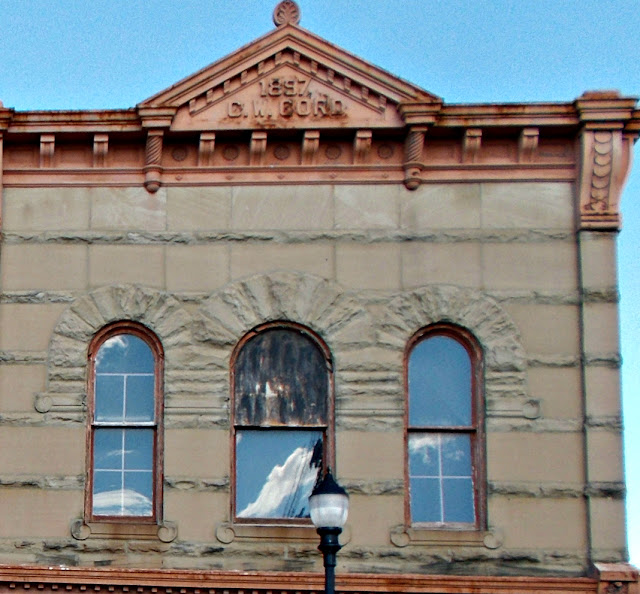 Eclecticism in architecture was very popular in both Victorian England and in the United States during the second half of the 19th century. This could explain the difference in the styles of ornamentation in the northern half and the southern half of the building.  Note that the two rectangular pediments that stand above the roof line on the north are different from the two gables on the south. 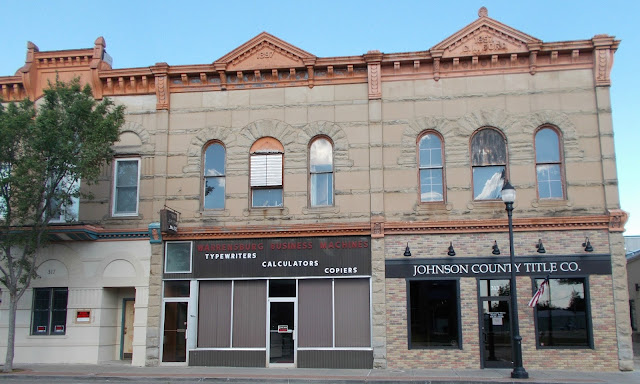 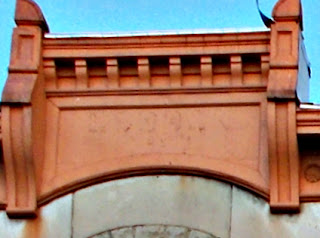 while the gables on the south are not.  The pediments also extend below the cornice onto the face of the building

In spite of the north/south differences the building maintains a harmonious motif with the Pompeian Red color of the ornamentation and the use of thin horizontal striations that stand out from the second story facade. 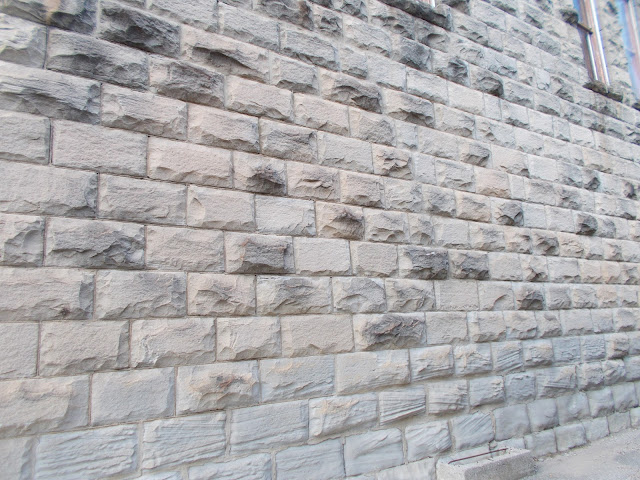 The sandstone face of the south wall is undamaged and still has a fresh appearance. 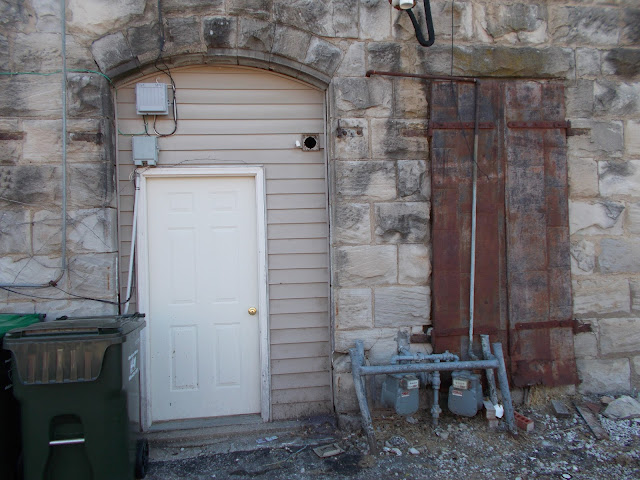 The east wall faces an alley and contains new doors to allow entry to second-floor apartments.

The north wall features a mural that was commissioned by Wanda Skelton Insurance.  It was painted as a public art project by L. LeGrand in the late 1990s. 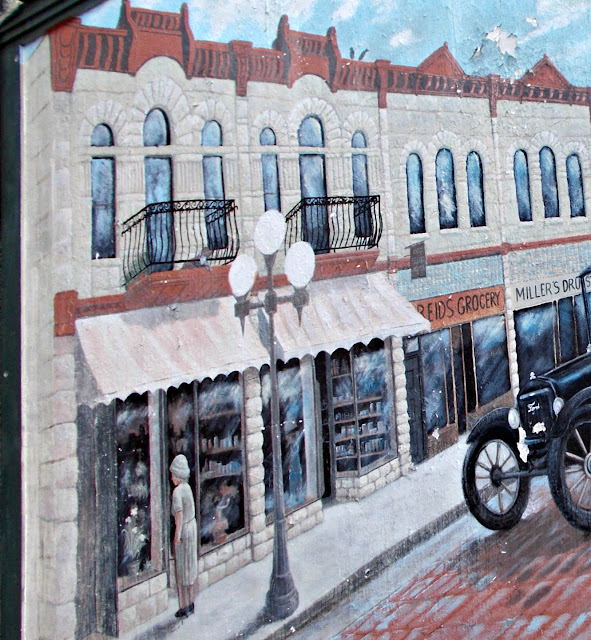 An interesting part of the mural is a depiction of the very building upon which it is painted as it appeared in the 1920s.  The painting clearly shows the north/south differences in the windows and decorative features.  The northern half of the building had two balconies fenced in wrought iron. 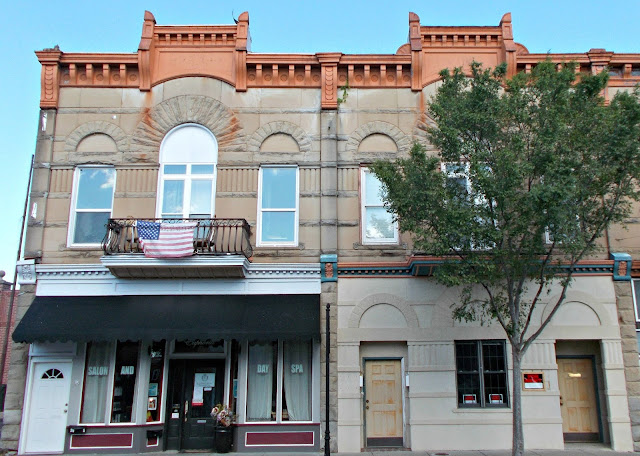 Although the base of the second balcony still remains (obscured by the tree) the balustrade is gone.

The ground level storefronts contain no original material except for the sandstone pillars that separate the four stores and continue on the second floor. The second storefront from the south end is smaller than the others to make room for a door that leads to upstairs rooms used by the Independent Order of Odd Fellows. 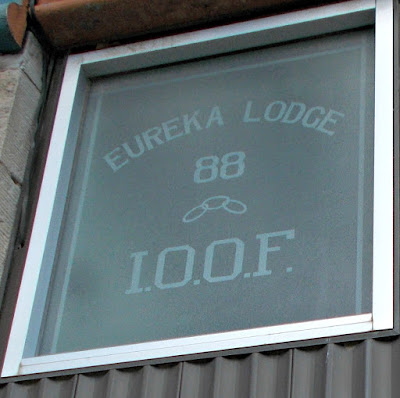 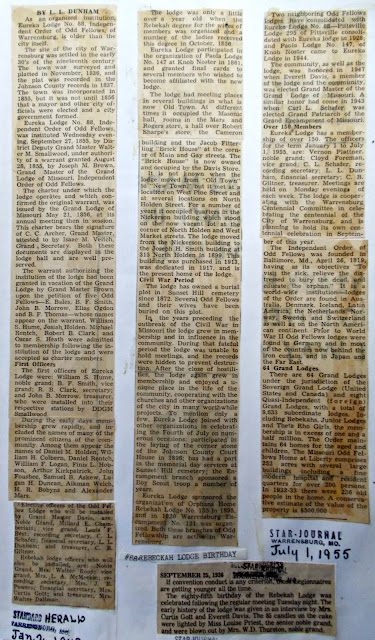 click to enlarge
Here's an interesting article about the Odd Fellows that you can't read.  It's dated July 1, 1955 and contains a little history about some of the places where the lodge met "... Eureka Lodge No. 88 Independent Order of Odd Fellows was instituted Wednesday evening, September 27, 1855 by District Deputy Grand Master Walter M. Smallwood... The lodge had meeting places in several buildings in what is now Old Town. At different times it occupied the Masonic Hall, rooms in the Mars and Rogers store, a hall over Robert Sharpe's store, the Cameron Building, and the Jacob Fitterling Brick House. at the corner of Main and Gay Street. The Brick House is now owned and occupied by the Davis Store. 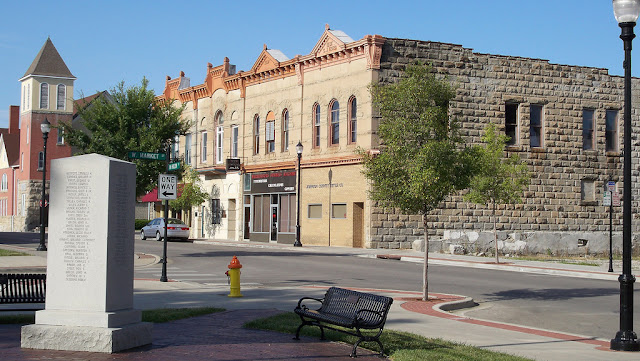 "It is not known when the lodge moved from "Old Town" to "New Town," but it met at a location on West Pine Street and at several locations on North Holden Street.  For a number of years, it occupied quarters on the now-vacant lot at the corner of Holden and West Market.  The lodge moved from the Nickerson Building to the Joseph H. Smith building at 315 North Holden in 1899. This building was purchased in 1913 and was dedicated in 1917, and is the present home of the lodge..."
Okay... What we now call the Cord building was referred to as the Joseph H. Smith building in this 1955 article.  Where did they come up with that name?
Some lettering on the northernmost pediment has been removed, but has left a barely readable stain which contains the name "Lobban."  The letters were probably attached to the building after Luther Lobban bought it in 1899.  Here's an article from the Warrensburg Standard Herald dated April 28, 1899.

C.W. Cord sold his grocery business to Harry Jennings and Will Ditler, and sold the building to Luther Lobban. I never did find out how it got to be known as the Joseph Smith Building.
"C. W. was a grocer and his mom Ida Lobban a teacher. When E. L. was ten, his father's general store failed and C.W. moved the family to Joliet, Illinois where his wealthy brother-in-law offered to set him up in a jewelry store. In 1904, when the brother-in-law picked up stakes to move to Los Angeles, C.W. and his family went along, too." Link about Erret Lobban Cord

Also, as of May 30, 2017, an owl can be seen sitting on her nest on the extreme northwest corner of the building. 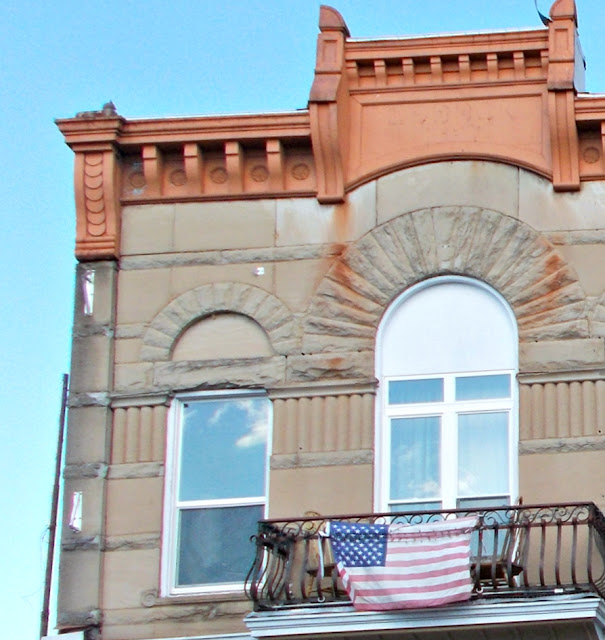 Here's another view of her. 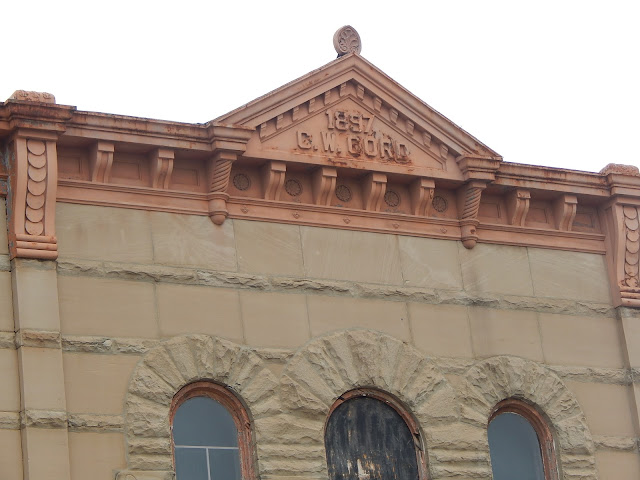 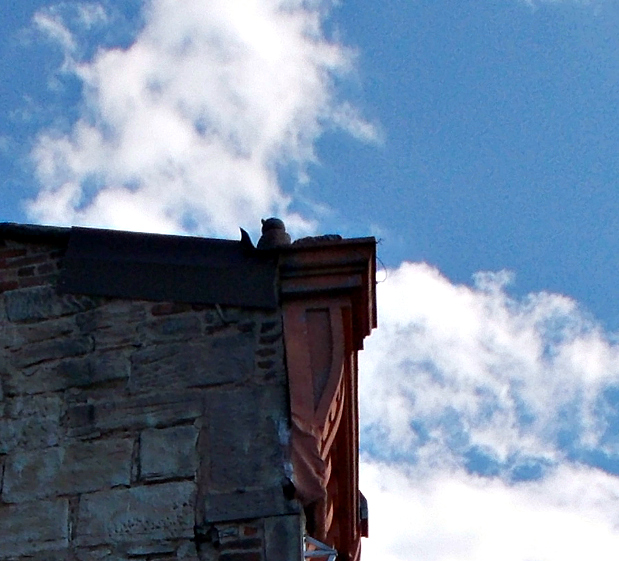 C.W. Cord’s son, Errett Lobban Cord, born in Warrensburg in 1894, was famous for the Cord automobile. The Cord family lived and worked in Warrensburg for around 14 years. sen-erret-lobban-el-cord-industrialist link
Thanks Peggy Nuckles 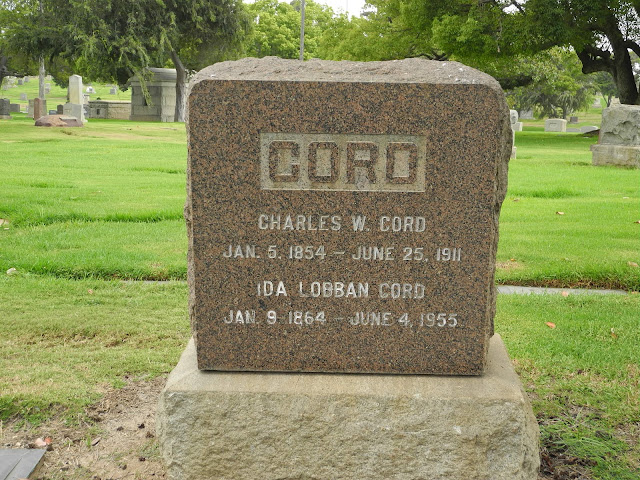 Henry Clay Cord is the son of Carvel and Ruth A. (Shockey) Cord.
" Weekly Standard Newspaper, Warrensburg, Missouri Friday Feb. 9, 1900."
Death of Henry C. Cord ---- Well known Citizen Passes Away.
Saturday -- Henry C. Cord for many years a merchant and a resident of this city since 1875 died at his home on North Miller Street, Saturday morning, February 3. He had been ill for several months, and his death has been momentarily looked for some weeks. The funeral services were conducted from the Christian Church at 3 o'clock Sunday, Rev Denton officiating, after which the remains were interred in the city cemetery. Henry C. Cord was born in Fleming County, Kentucky. in May 1821 and lived there till he was grown. He was married to Miss Zerilda Shryack, sister of Marcellus Shryack of this city in 1838. They moved to Macomb, Il. in in1856. Where he was engaged in farming until 1865, when he moved to Warrensburg, and entered the grocery business, First in old town and afterward in the building now occupied by Ross Brothers on Pine Street. He sold out and retired from business in 1885. Mr. Cord was a life long Christian. He joined that denomination when 17 years of age and continued his allegiance until his death. When he came to Warrensburg, The church at this place had become demoralized and its members scatters, during the civil war, he with the help of A.H. Gilkeson, J. P. Wroshaw and others reorganized the church, and were largely instrumental in placing this denomination in it present prominent position among the churches of Warrensburg. He was elected an elder at that time. Which office he held until declining years and broken health necessitated his resignation. He was one of the trustees at the time of his death. Mr. Cord and his wife were the parents of a large family. To them were born fifteen children, eight of whom are living, as follows: Mrs. Mary Morgan, wife of J. D. Morgan, of Los Angeles, California; John H. Cord , Mrs Elizabeth Ferguson and C. W. Cord of this city; James Cord of Kansas City, Mrs Alice Grovend.
Added info:
Carvel Cord father of Henry Clay Cord is the son of Jacob Cord and Mary Mitchell Donovan.
Information from Paul J Cord.
Family links:
Spouse:
Zerlida Cord (1823 - 1901)*
*Calculated relationship
Burial:
Sunset Hill Cemetery
Warrensburg
Johnson County
Missouri, USA
Plot: Lot 385