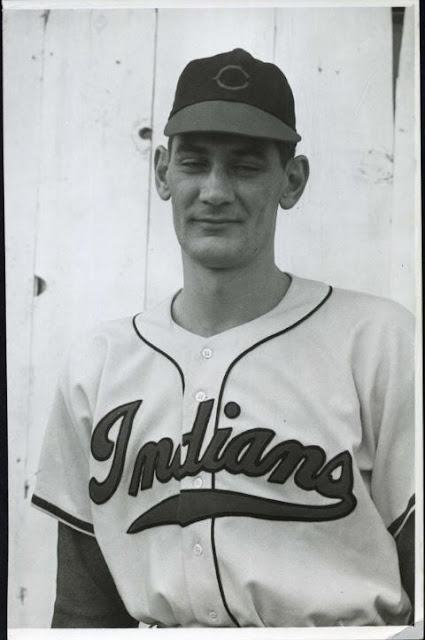 Herb Conyers, UCM Baseball, Played for Cleveland Indians 1950
DATE SHOT : Spring 1950
SUBJECT : Herb Conyers
Scarce photo of this short-time Cleveland Indians player. Herbert Leroy Conyers was born in 1921 in Cowgill, MO and died in 1964 in Cleveland, OH. He went to college at the University of Central Missouri. He played major league baseball for a single season in 7 games in 1950 as pinch hitter and 1st baseman for the Cleveland Indians. After the 6' 5" left-handed hitting first baseman had led four different minor leagues in hitting, Herb finally got a chance with the Cleveland Indians in 1950 and he hit .333 (3 for 9) in seven games, with one of his hits a home run. This would be his only appearance in the major leagues. Herb came back to Central Missouri State University and completed his work on his bachelor's degree in 1951 and later earned a master's degree. Conyers had been a four-year basketball player for the Mules from
1938-1942. He was the second leading scorer on the Mule's MIAA championship team of 1941-42 and earned first team recognition. He also played football for two years and competed in track one year during his college career. In 1995 Conyers was inducted into the Central Missouri State University Athletic Hall of Fame. Herb was a math teacher and coached the baseball and basketball teams at Collinwood High School in Cleveland, OH, where he died of cancer on September 16, 1964, at age 43.