Glenn W. Stahl
Stahl Specialty Company first opened its doors just after the end of World War II. Like most new businesses starting out after the war, the company began in one simple, rented room. Glenn Stahl was not only the owner, yet the only employee. In fact, 1946 – the company’s first year in business – had a total payroll of just $45.86. 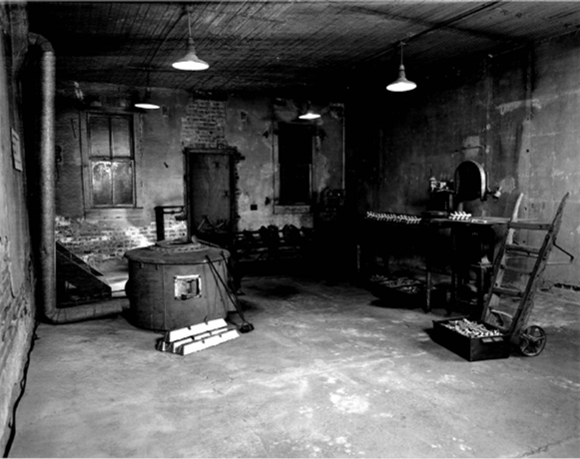 In the early ‘50’s, Stahl was contacted about casting a mower deck for a new rotary lawn mower that was just developed. Unaware that the industry considered a casting of this size to be too big for the permanent mold process, Stahl simply built the mold and started pouring castings. The aluminum lawn mower deck quickly became one of the first high-volume products for the company.


In addition to the rotary lawn mower deck, another of Stahl’s first high-volume jobs was the gas outdoor barbeque grill housing. This product, which was developed in the mid-60’s, is still in production today.


Stahl also had something totally unheard of at the time: it’s own tool room. This enabled Stahl to build it’s own tools, and to make changes to these molds on the same day, a timely response that was unique to the industry.
Stahl quickly discovered the enormity of the market for high quality aluminum castings. Through the 70’s and beyond, the company produced everything from simple, lightweight handles for construction tools, bases for computer terminals, and arrows for weather vanes, to huge housing and cooling tower fan blade hubs weighing several hundred pounds.
Also in the 70’s, the company opened an additional foundry in Warrensburg, MO. This foundry was set up to produce high volume parts on a rotary casting machine. This unique machine was interfaced to a robot which automatically ladled molten aluminum, enabling a single operator to control up to eight casting stations.

In the 80’s, Stahl Specialty Company pioneered the “cell manufacturing” concept. The utmost in efficiency; castings are completely manufactured, processed and packaged for shipping all within a few feet of where the aluminum came in as an ingot.


Although the production machining department was initiated many years before, in the 90’s, the customer demanded a complete product, a machined casting. Stahl developed the capability to produce sophisticated part geometries, completely machined and pressure tested, assembled, and ready for the assembly line.

Excerpt: Washingtonpost.com 1985 rediscovering-made-in-usa and INC magazine
Rediscovering 'Made in U.S.A.'
By Joel Kotkin;Joel Kotkin is the West Coast editor of Inc. magazine and for which he has been reporting on manufacturing in America. Researcher March 17, 1985

.......Similarly, with his slight Southern accent and down-home manners, 71-year-old Glenn Stahl seems the antithesis of the hard-driving high-tech entrepreneur. And as a aluminum foundryman in Kingsville, Mo., a hamlet of less than 500 an hour's drive from Kansas City, Stahl isn't exactly the sort to be courted by overseas manufacturing promoters from the Far East. Yet Stahl, and his Stahl Specialty Co., also reflect the new commitment to manufacturing that may well prove a crucial element in America's industrial future.


Like Toreson, Glenn Stahl has learned that the only way to compete with overseas manufacturers -- who now control perhaps one-quarter of the U.S. casting market -- is to perfect the art of production here at home. So at a time when capital spending at most U.S. foundries has dropped off dramatically, Stahl Specialty has continued to buy between $2 million and $4 million worth of new equipment every year.


Today the company has more than a dozen of the most modern Japanese-made, computer-controlled machine tools, an IBM System 38 computer for payroll and a $400,000 McDonnell Douglas computer-aided design- and-manufacturing system.
This approach has allowed Stahl to expand his product line into such sophisticated products as the casings for storage devices on IBM's 3380 mainframe computers. Stahl Specialty has continued to grow despite the conventional wisdom about "low-tech business." The balance sheet for the U.S. foundry industry as a whole has gone from a $1.6 billion profit in 1979 to a loss of $527 million in 1983; shipments declined from $21.6 billion to $15.9 billion. But Stahl Specialty has enjoyed consistent profits; its sales have jumped from around $24 million in 1980 to over $41 million in 1984. And its work force has grown from 310 in 1981 to 530 today -- while other foundries in this country have dropped as many as 40 percent of their workers.
"Too many foundries have stayed still. People get killed by imports that way," says Stahl. "They only way to do it is to invest in the latest machinery and have a much higher level of technology than they do. That gives you a flexibility and ability to diversify which they can not compete with. All you need is a commitment to change." 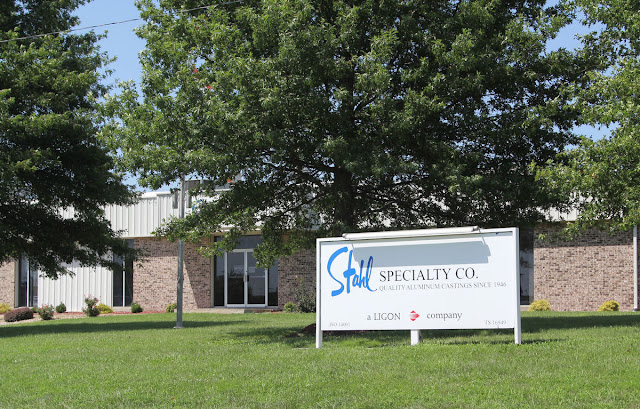 Management Today - MT Magazine MT Link
Stahl Specialty Co. enjoys a unique position in the market due to its ability and capacity to produce high-quality, precision-machined products from complex castings produced in-house with significant volumes. This proficiency is virtually unmatched in the industry. This skill set further provides the basis for highly competitive production of machined permanent and semi-permanent castings at any volume.
President Jim Spalding says Stahl’s history in the aluminum foundry industry has given it a strong position in the marketplace, one that the company embraces and continually works to fortify. “One of the reasons for our success is the legacy and the recognition of the name,” Spalding says. “Our brand name is very recognizable for anyone who knows permanent mold technology.”
The company’s legacy began in 1946 with Glenn Stahl, who started casting aluminum components from a single, rented room. In the early 1950s, Stahl began casting a mower deck for a new rotary lawn mower. Although the rest of the industry at the time considered the part too large for the permanent mold process, Stahl simply made the mold and poured the castings anyway, and within a short time the component was one of the company’s first high-volume products.
Stahl Specialty Co. continued to innovate and lead the market in a number of ways, including being the first to have its own tool room. According to the company, this allowed it to not only make molds but also make changes to them in-house to respond quickly to customers’ needs. In the 1980s, the company was a pioneer in the use of cell manufacturing, in which castings are made, processed and shipped from the same small area for maximum efficiency. Other innovations Stahl Specialty has brought to the industry include hydraulic-powered tilt casting machines, bottom-drop heat treatment furnaces, and rotary casting machines, Spalding says.
Today, Stahl Specialty Co. concentrates on permanent and semi-permanent mold aluminum castings. From its manufacturing plants in both Kingsville and Warrensburg, Mo., the company produces components for the marine, diesel engine, agriculture, refrigeration, construction tool, automotive and commercial industries. Spalding says the company has evolved into one known for precision casting and machining of parts for pressure-tight and/or high mechanical integrity requirements. He explains that the company has the capability to cast and machine parts ranging from half a pound to 500 pounds.
Special Skills
Stahl Specialty’s greatest advantage, according to Spalding, is its unique combination of extensive casting and precision machining capability, and the ability to provide a wide range of volumes all at competitive prices. This capability is evident in the current award winning products being manufactured at both plants. Customers who visit and see the high-tech refrigeration compressor components, heavy duty engine and transmission products, and the “casting within a casting” marine engine manifold always walk away impressed.
“We are proud of our skilled foundrymen and machinists who produce high quality products every day. Many of our employees have been with Stahl for a number of years with several recognizing 40-plus years,” Spalding says. “Providing complex machined castings successfully relies on good engineering and good tooling. Involving Stahl’s engineering staff early in the product development phase can ensure the best in manufacturability and cost efficiency.
“We employ the best engineering talent from metallurgists to Ph.D. engineers and utilize the latest mold flow simulation tools to enhance the knowledge developed over the 65-year history.”
Stahl Specialty remains at the top of the industry because of its long-established presence in the marketplace and the sheer capacity it offers. “The combination of size and capacity that Stahl has is fairly unmatched in the industry,” Spalding says, adding that the company can process approximately 40 million pounds of aluminum a year.
More and more of its customers are indicating a desire to consolidate their supply base in order reduce their own costs of managing suppliers. Stahl offers customers more value through integration of comprehensive services.
The complete line up of casting equipment from small single station machines, and high volume rotary casting cells to the largest fleet of the biggest tilt-pour machines in the world, the capacity to produce quality permanent castings is simply unmatched. The company also boasts more than 40 large horizontal CNC machining centers. “It’s a unique combination of being able to make large castings and then to machine those castings that is extremely limited in the competition,” Spalding says.
New Horizons
Recently, Stahl Specialty’s reputation and resilience were put to the test as the entire aluminum foundry industry suffered the effects of the recession. Spalding explains that the company was fortunate not to have lost any customers, but adds that revenues dropped nearly 70 percent in January 2009. All of that can be attributed to the recession.
“There was a huge pullback, and it was an exercise in survival,” Spalding says.
For its part, Stahl Specialty focused its attention on streamlining and cutting costs. Although revenues have recovered significantly, the result of streamlining efforts is paying great dividends as the company has emerged leaner and more competitive than ever with open capacity to take on new projects.
Fortunately, the opportunities for growth are presenting themselves, according to Spalding. He says many manufacturers are coming to Stahl Specialty with work that they had taken overseas before the recession.
Many of those manufacturers, he adds, have discovered the apparent low cost of working with overseas foundries comes with a higher cost in terms of missed deadlines and low quality. These customers appreciate Stahl Specialty’s focus on delivering high-quality components on time all the time, Spalding says.
“That’s the only way to be a good supplier to anyone, is to give them what they want, when they want it,” he says.

Foundry Management & Technology Hall of Honor
The FM&T Hall of Honor recognizes men and women whose technical and process innovations; organizational leadership; professional and industrial standards; and personal contributions and achievements have improved and enhanced metalcasting as a science, as an industry, and as a community. Inaugural Inductee - 1992 Glenn W. Stahl 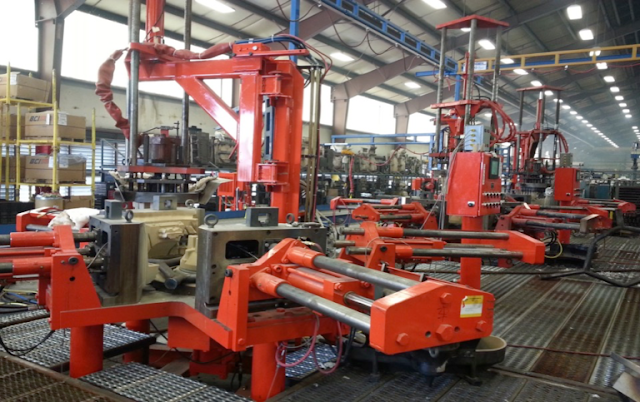