September 21, 1862 Major Nathaniel B. Holden Assassinated at His Home 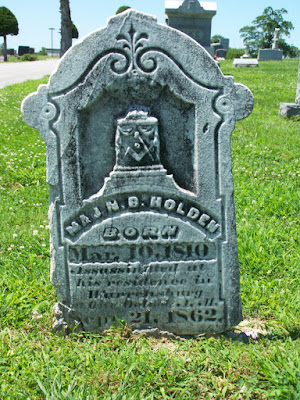 A WARRENSBURG TRAGEDY
The strange fate of Nathaniel B. Holden for whom Holden Street was named and who helped found the Town.
Few people of Warrensburg, as they pass daily up and down Holden Street's principal thoroughfare know that the life of the man for whom it was named ended in one of the darkest and most mysterious tragedies in the history of Johnson County. For many years prior to the Civil War Nathaniel B. Holden had been receiver for the United States land office in this district and a man of great activity and influence. The coming of the war greatly affected Mr. Holden. Though a strong Democrat, he dreaded the disruption of the country and employed every exertion toward allaying the excitement and turmoil in the community caused by the struggle. His solicitude was so great that he finally broke down, having a stroke of paralysis in 1862 and became a hopeless invalid. He was a bachelor and made his home with his sister, the wife of William Colbern who lived in a house known to all who have visited the cemetery as it sits back from the road on the north side in an open field and east of the cemetery entrance. It has a lonely and sinister appearance, so that one would not go too far amiss in calling it a haunted house. One night when Mr. Colbern was absent from home there was a knock at the door which is on the south side. Mrs. Colbern arose and made a light. Mr. Holden also arose and stood with palsied form in the middle of the room. When his sister opened the door his figure was plainly outlined. Two shots were fired instantaneously—one from outside the door and one from outside the window in the west of the house. Holden fell dead to the floor. No face appeared, not a word was spoken but the assailants faded away in the darkness of the night, and from that hour to this the mystery of that tragedy has remained a sealed book.
—John R. Reads, From the Standard Herald. 4 September, 1903
NOTE: John R. Reavis was living at the time of the tragedy.


A company of Missouri gentlemen called recently on President (Franklin) Pierce. When Major N. B. Holden, formerly of the 12th infantry, and now of Johnston county, Missouri, was presented, the President exclaimed, "Major Holden? God bless you, Holden! a braver man never trod shoe leather. Holden, we were in a narrow road when we were last together. Come and see me, Holden; don't leave the city without coming to see me!" The Major was overwhelmed by such a handsome compliment; tears stood in his eyes, and his friends, who accompanied him, felt at least ten feet taller. The commendation was well deserved, for no braver man than Holden ever did live.

Maj. N. B. Holden was prominent in the early day affairs of Johnson county. He was a member of the Legislature and a prominent factor in bringing the Pacific railroad through Johnson county, and was identified with the early day growth and development of Holden. Anticipating the path of the railroad, Warrensburg resident Col. Benjamin Grover laid out a plat in 1857 to the east of Holden Street. Grover had wisely made an agreement with the Pacific Railroad in which he donated 40 acres to be dedicated for a depot and other necessary structures such as a water tower and freight building. By mistake or otherwise, the depot was actually built in 1865 on land owned by N.B. Holden, west of Grover’s property. Only one image of the first station remains; it was a simple, one-storey structure with a gabled roof and was clad in vertical wood siding. On the south elevation, a raised loading dock facilitated the movement of crates and parcels between the box cars and the freight room. It stood until February 1889 when it went up in flames and was subsequently replaced by the present station.

Daniel Maxwell Holden - Colorado Pioneer
From: Portrait and Biographical Record of the State of Colorado, 1899 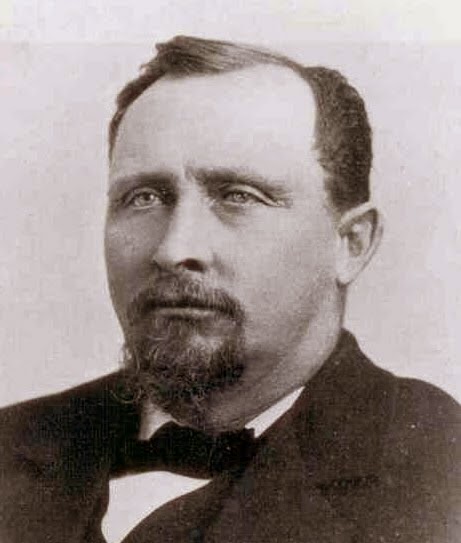 DANIEL MAXWELL HOLDEN, a pioneer of 1859, now deceased, was born near Antwerp, N. Y., August 10, 1833. His father, Zophar Holden, a native of Vermont and a descendant of Scotch ancestry, settled near Antwerp, Jefferson County, N.Y., where he engaged in farming until his death. He married Jerusha Harrison, who was born in Vermont and died in Warrensburg, Mo. They became the parents of eleven children, but all of these are now deceased. One of the sons, Maj. Nathaniel Holden, was receiver of the United States land office in Warsaw, Mo., and owned large tracts of land occupied by the present town of Holden, which was named in his honor. During the war he was a member of a Missouri regiment and was assassinated by guerillas at his sister's home. Another son, Lieut. -Gov. William Holden, who went to California in the days of the gold excitement, became a prominent politician and served as lieutenant-governor and for a short time as governor; also as state senator and a member of the legislature; his death occurred in California.
Another son, Stephen, came to Colorado in early days and was engaged in the sheep business in Bijou Basin until his death.
At sixteen years of age the subject of this memoir went to Missouri, joining his older brother, Major Holden. Afterward he attended the academy at Warrensburg and was employed in the United States land office, under his brother. In 1859, buying up a herd of cattle and horses, he came to Colorado, via the Arkansas route, and located on Cherry Creek, now within the city limits of Denver. Arriving there on the 1 3th of July he at once embarked in the dairy business, and later located a ranch in Bijou Basin El Paso County, on the Elbert County line, near what is now Peyton. It was his custom for several years to return to Missouri every fall and buy cattle and horses, which he would drive to Colorado. Several times Indians threatened to attack him on his ranch, but he never had an encounter with them. His ranch comprised about fifteen hundred acres and had many springs, besides the additional advantage which irrigation gives. A natural shelter for the stock was afforded by the bluffs and pine trees found in abundance on the place. He made a specialty of raising graded Shorthorns, in which he met with success.
In 1872 Mr. Holden brought his family to Colorado Springs. Here he assisted in the organization of the Exchange National Bank, of which he served as a director from its establishment, and was president during the last six years of his life. He was also a stockholder in the El Paso Electric Company, owned considerable property in Colorado Springs, and had mining interests in Cripple Creek, Aspen and Silverton. He was an active member of the Colorado Cattle Growers' Association. In the Society of Colorado Pioneers and the El Paso County Pioneers' Society he was a prominent member. Fraternally he was identified with the Odd Fellows and politically was a Democrat.
At Franktown, Douglas County, Colo., November 9, 1864, Mr. Holden married Miss Isabel Hayden, who was born in Elkhart, Ind. Her father, Lewis Hayden, a native of Indiana and a descendant of an Ohio family, removed to Iowa and settled at Hardin, where he built a flour mill and a lumber mill on the Iowa River. In 1863 he brought his family, by wagon, to Colorado, via the Platte route; spending three months in making the journey to Denver. He settled on Plum Creek, sixteen miles south of Denver, in Douglas County. After a year he moved to Bijou Basin, where he took up land and engaged in stock-raising. Later, however, he removed to Pleasant Valley. He died near Coaldale, in the Wet Mountain Valley, at sixty- five years of age. His wife, who was Margaret Williams, a native of Indiana, is still living near Coaldale, and is now seventy-nine years of age. Of their eight children six are living, Mrs. Holden being next to the youngest. Her brother, Frank, is ranching in Lake County, Colo.; Lyman lives in Pleasant Valley; Chauncey resides at Coaldale; Mabel is the wife of William Champ and lives at Poncha Springs; and Hulda, Mrs. Robert Curran, lives at Coaldale. Mrs. Holden was sixteen years of age when the family came to Colorado, and since then she has made this state her home. She is identified with Rebekah Lodge, I. O. O. F., and is much esteemed by her acquaintances. She owns the ranch which was improved by Mr. Holden, and is also still interested in the bank of which he was president. Her family consists of six children, namely: Lawrence, a stockman in Elbert County, near Ramah; Zophar, who is engaged in the stock business in Elbert County near Calhan; Mrs. Edna Mathis, of Monument; Mrs. Olive Jennings, of Manhattan, Kan.; Erma, educated in the schools of Colorado Springs, and J. D., who are with their mother 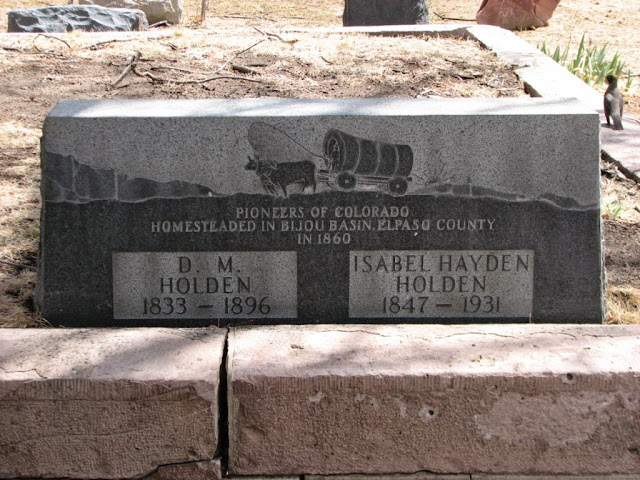 Mr. Holden died August 12, 1896, after a brief illness. He was buried from the Presbyterian Church, in which denomination he had been interested. In his death the city lost one of its respected pioneer citizens, a man who had been associated with the history of the state from the earliest days, and one who had many friends in every locality where he had resided. Kind and generous in his intercourse with others, liberal in his benefactions, public- spirited and progressive, his citizenship was of the highest type, and conduced to the advancement of Colorado Springs along the lines of commerce, finance, education and morality.

Thank you for article. Margaret Williams is my 2nd Great Aunt.-Jesse Williams