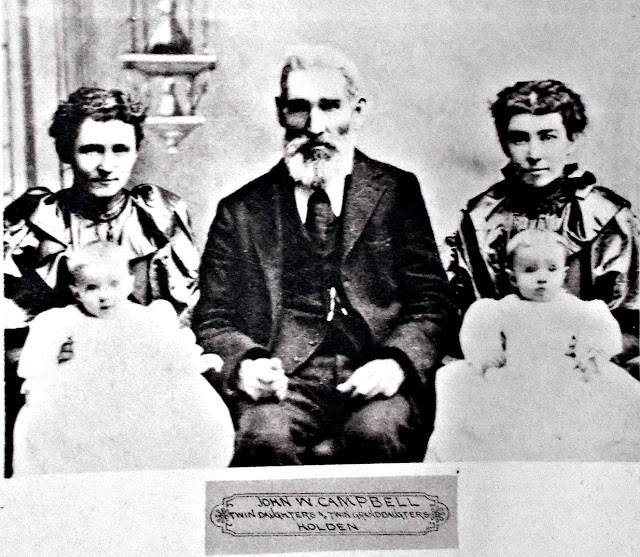 (From The History of Johnson County, Missouri,  written by Francis Cockrell, 1881.)


JOHN W. CAMPBELL, farmer and stock raiser, P.O. Holden, Missouri, was born in North Carolina, March 8, 1828. His father was a native of that state, and was a farmer by occupation, and was a soldier in the war of 1812. He died in 1857.
John W. spent his youth on a farm. His early education was very limited; he, however, availed himself of every opportunity, and spent all his spare time in reading, and acquired a good English education in this way. When he was 10 years of age, he moved with his parents to the state of Indiana.
He commenced business for himself at the age of twenty-one, in very meagre circumstances. He remained in Indiana until 1853, when he removed to McDonough county, Illinois, and settled on a farm.
He married Miss Mary E. Payne in 1856. Miss Payne was a native of Illinois, and the daughter of James M. Payne, a prominent farmer of that state. By this union they have had four children, three of whom are living; Martha E., Cora E.,and Flora A. -the last two being twins.
He remained until 1866, when he moved to Missouri and settled in Johnson County, two and one-half miles northwest of Columbus, on a farm which he still owns, consisting of 240 acres of well-improved land. Soon after his arrival in Columbus township, he engaged in the stock business and has been extensively engaged in carrying on his farm, and dealing in cattle and hogs. He has always been successful in his dealings, associating experience with good judgment, and never engaging recklessly in any business.
Mr. Campbell first moved to Holden in 1873, where he remained till 1874, when he moved back to the farm, where he remained two years, and again moved to Holden, where he has resided ever since. Mr. and Mrs. Campbell and one daughter are members of the Christian Church, and among its most liberal contributors.
Source: https://books.google.com/books?id=Ac5AAAAAIAAJ&q=john+w.+campbell#v=snippet&q=john%20w.%20campbell&f=false