M. L. Golladay-Signal achievements, such as those undertaken and brought to a successful outcome by M. L. Golladay of Holden, Missouri, place him in the front rank with Johnson county's industrial and business leaders.  Mr. Golladay has made a striking success as an organizer of establishments which are a pronounced benefit to the up building of his home city and county.  Although a comparatively young man, the strides he has been making in the commercial world are worthy of notice and are evidence in proof of the capabilities of the man himself. M. L. Golladay, druggist of Holden, Missouri, was born in Holden September 9, 1870, and is a son of David and Maria (Lawrence) Golladay, the former of whom was a native of Preble County, Ohio and the latter, a native of Oswego County, New York.  David Golladay, a druggist by profession, came from Ohio to Johnson County, Missouri in 1868 and established the first drug store in the city of Holden.
Mr. Golladay was one of the first business men to locate in the town of Holden and he took an active and influential part in the growth of this thriving city during his many years of residence here.  The elder Golladay took a great interest in local affairs and served as city treasurer for several years.  He built up a splendid business and laid the foundation of the present substantial family fortunes.  His death occurred in 1899 and his departure from this earthly realm was deeply mourned by the people of Holden.
Mrs. Maria (Lawrence) Golladay was a woman of fine attainments and a great force of character, one whose influence in the community and state was always for good during her long life which closed December 5, 1916. She was well educated and had the distinction of having taught the first public school held in Holden.  She was active in the work of the Women's Christian Temperance Association and served as both local and county president.  For a number of years, she was state superintendent of the Demorest Medal Contest. Mrs. Golladay was a noble and talented woman, whose work has survived her and will live long in the records of the moral uplift work which is still going on in Missouri and elsewhere.  M. L. Golladay, subject of this review, was educated in the public schools of Holden and the Wentworth Military Academy at Lexington, Missouri.  From boyhood, he has practically spent his whole life in the drug business, first associated with his father and then succeeded to the business upon his father's death.  Mr. Golladay is owner and manager of Golladay's Drug & Book Store, which is the oldest established business of its kind in Johnson County, operated for fifty years under the same name. Of late years, Mr. Golladay's many interests have so divided his time that he employs a manager to operate the drug store.  He is proprietor of the splendid "Hillcroft Farms" which are noted for the fine, registered Jersey cattle, registered Duroc Jersey hogs and white Leghorn chickens.  He also employs a manager for the "Hillcroft Farms" which are operated as a dairy farm.  Mr. Golladay was the organizer of the Holden Home (Central Missouri) Telephone Company, which began operations in 1901
and has now more than two thousand subscribers, with exchanges at Holden, Centerview, Kingsville, and Chilhowee.  He is secretary and manager of this flourishing and prosperous concern, which is capitalized at fifty thousand dollars.  He helped organize and place in operation the Holden Ice and Fuel Company, which began doing business in 1914, the principal product being "Sanitary Distilled Water Ice." Mr. Golladay also erected the Holden Steam Laundry and is owner of the City Garage and Repair Shop, operated in connection with the Overland Service Station.

Overland Service Station Sign (not from Holden)
This versatile and energetic citizen is factory agent for the Willys-Overland Company, 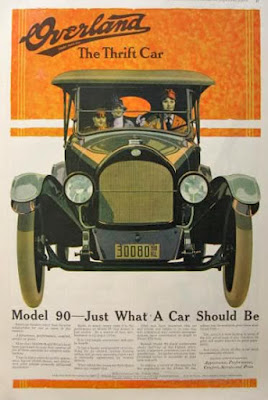 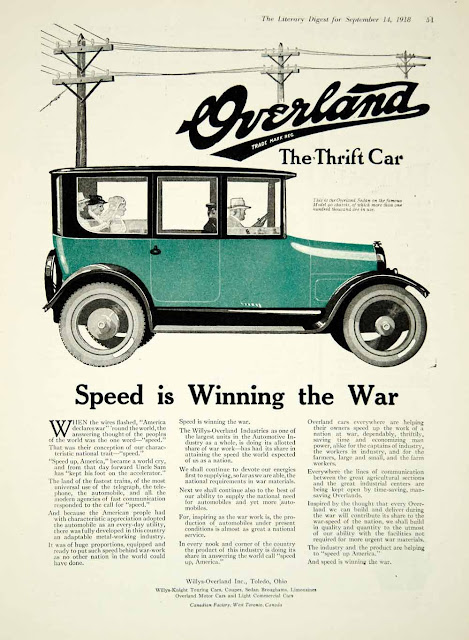 Admiral Hay Press Company, the Avery Company, and the B. F. Goodrich Company.  He is affiliated with the Bank of Holden as a stockholder, a concern which has a capital and surplus of over ninety thousand dollars.  In September, 1881, M. L. Golladay was united in marriage with Laura Rice, who was born in Oswego, New York and was a teacher in the old Seminary at Holden.  Mr. and Mrs. Golladay have reared three sons, as follow: Lawrence R., a skilled electrical engineer, now in the employ of the Westinghouse Electric Company, Pittsburg, Pennsylvania; E. Lew, manager of the Holden City Garage, a mechanical engineer by profession; and H. David, a student in the Holden High School.  Mr. Golladay is independent in politics.  He is a member of Lodge Number 262, Ancient Free and Accepted Masons, of the Ancient and Accepted Scottish Rite Masons and of the 32nd Degree and of the Ararat Temple Mystic Shriners of Kansas City, Missouri.  He is Past Master of Masonic Lodge Number 262, of Holden; and is Past High Priest of Royal Arch Chapter, Number 65, Holden; and is Past Noble Grand of the Independent Order of Odd Fellows of his home city.  He is also Past Council Commander of the Woodmen of the World and has served as president of the Missouri State Telephone Association, holding the office of director in both State and National Telephone Associations. Mr. Golladay has achieved a state-wide and even national reputation as a telephone engineer and as a breeder of Jersey cattle.  He is a member of the Southwest Jersey Cattle Breeders' Association.
USGENWEB NOTICE: In keeping with our policy of providing free information on the Internet, data may be used by non-commercial entities, as long as this message remains on all copied material. These electronic pages may NOT be reproduced in any format for profit or for presentation by other persons or organizations. Persons or organizations desiring to use this material for purposes other than stated above must obtain the written consent of the file contributor. This file was contributed for use in the USGenWeb