I found this in the Simmons Studio collection of negatives in the basement of the Historical Society. 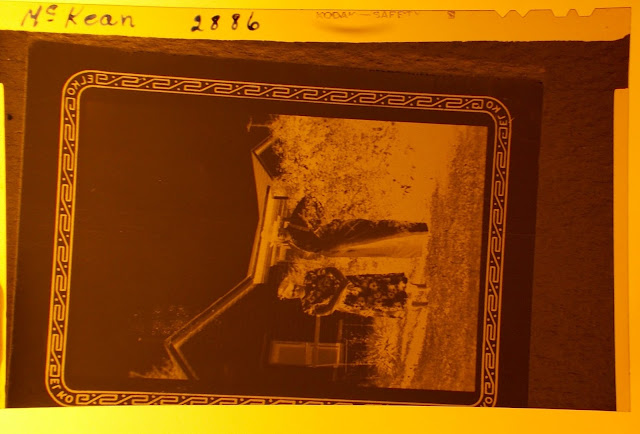 Apparently someone had taken a picture of a snapshot and then sent the negative to Simmons Studio to have it made into a presentable photograph. The name McKean is written on the edge.

Here's the best I could do with it. 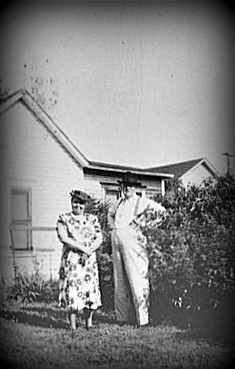 There's only one McKean family in the area and it has a thick file in the Historical Society's family section. 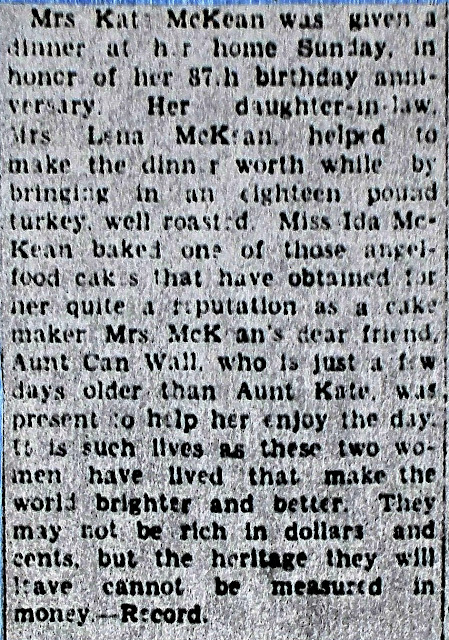 Mrs. Kate McKean was given a dinner at her home Sunday, in honor of her 87th birthday anniversary.  Her daughter-in-law, Mrs. Lena McKean, helped to make the dinner worth while by bringing in an eighteen pound turkey, well roasted, Miss Ida McKean baked one of those angelfood cakes that have obtained for her quite a reputation as a cake maker.
Mrs. McKean's dear friend, Aunty Can Wal, who is just a few days older than Aunt Kate, was present to help her enjoy the day.  It is such lives as these two women have lived that make the world brighter and better.  They may not be rich in dollars and cents, but the heritage they will leave cannot be measured in money (undated) 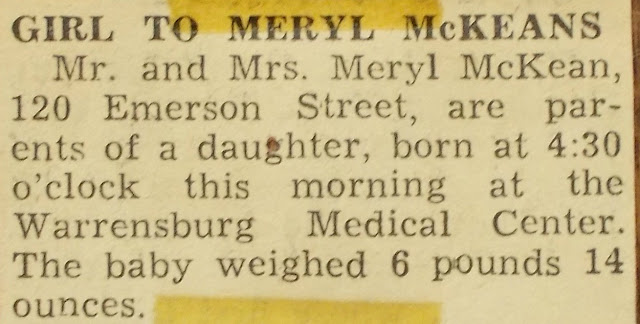 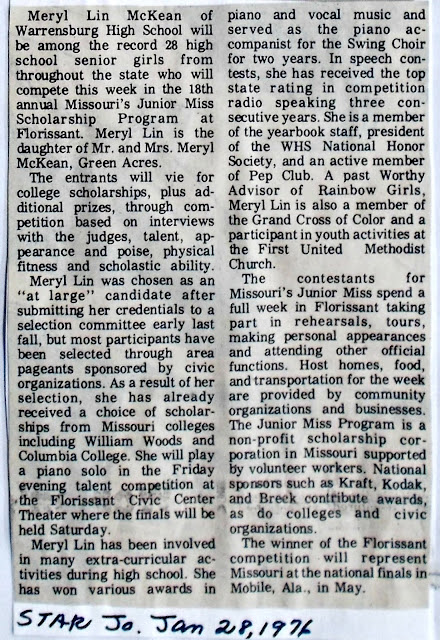 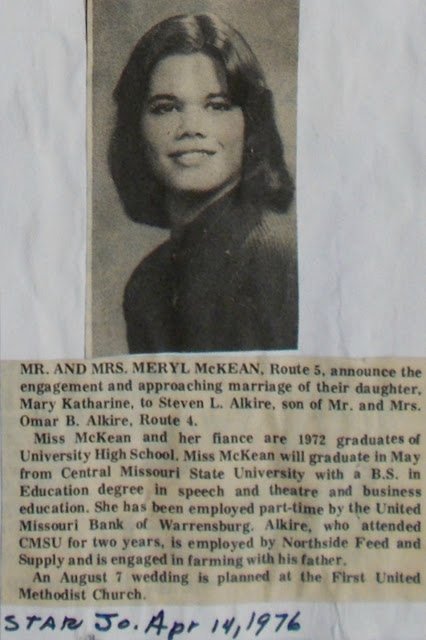 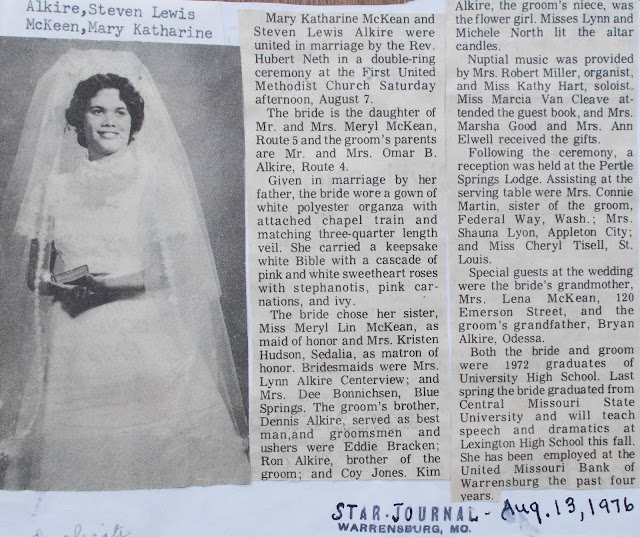 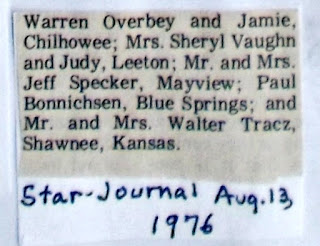 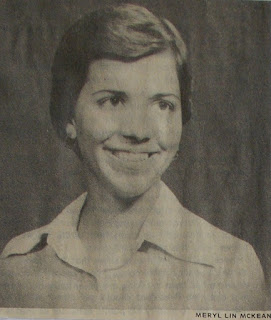 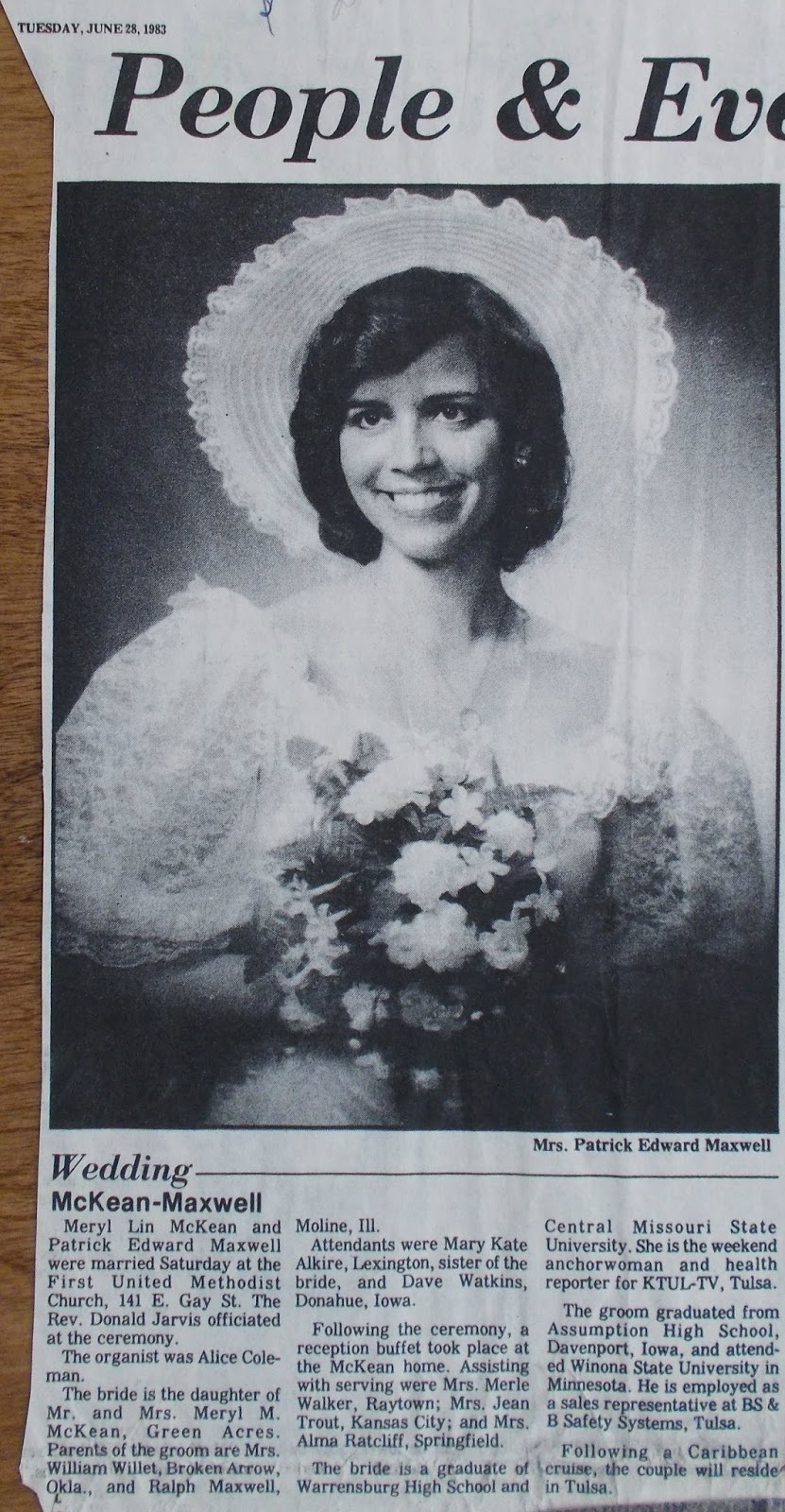 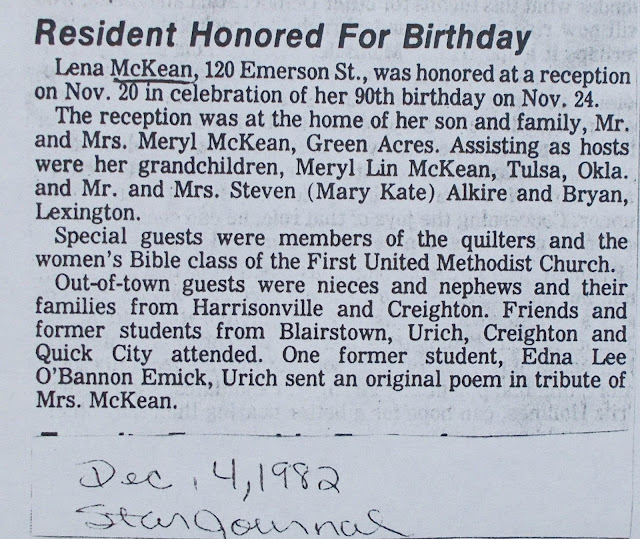 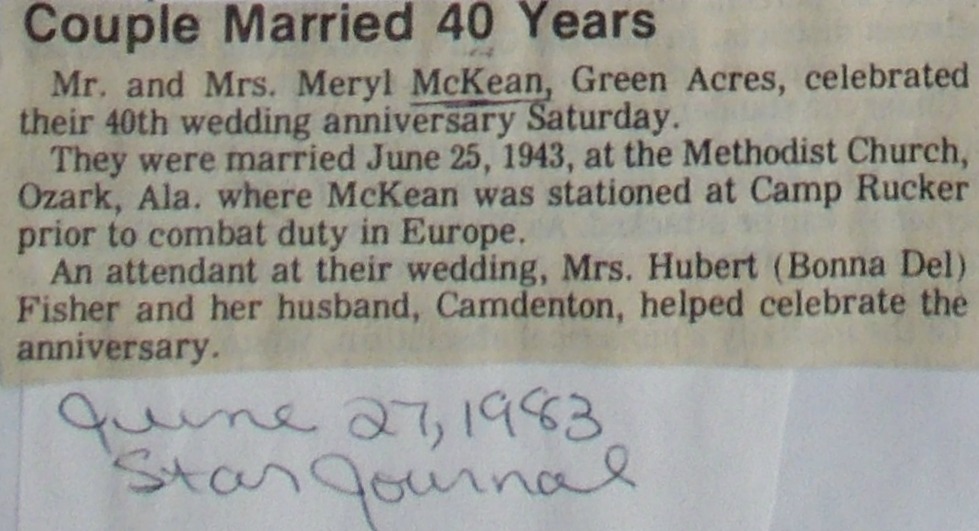 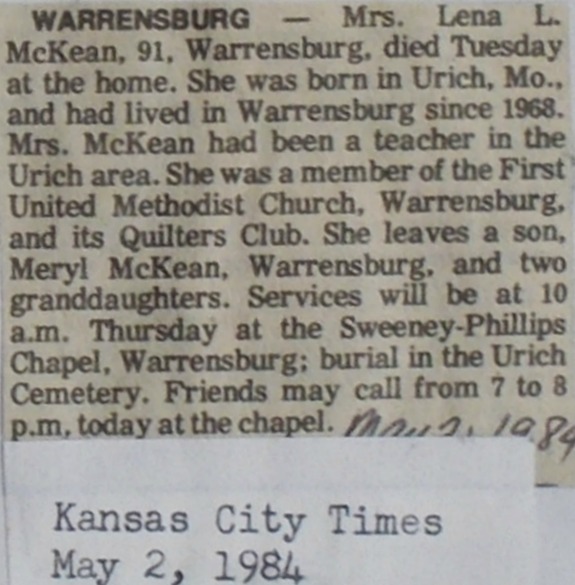 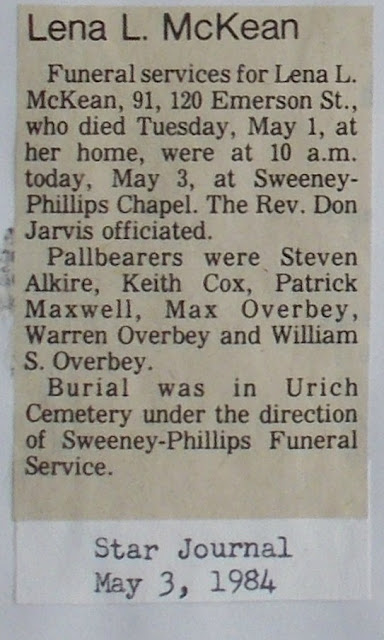 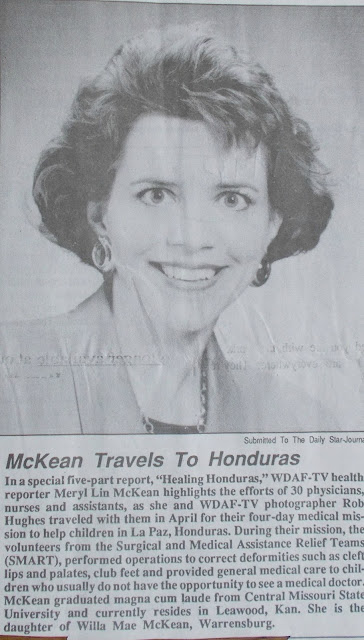 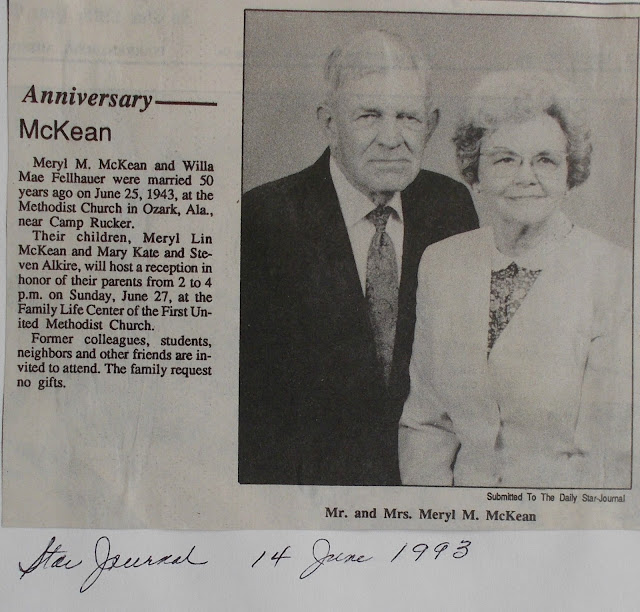 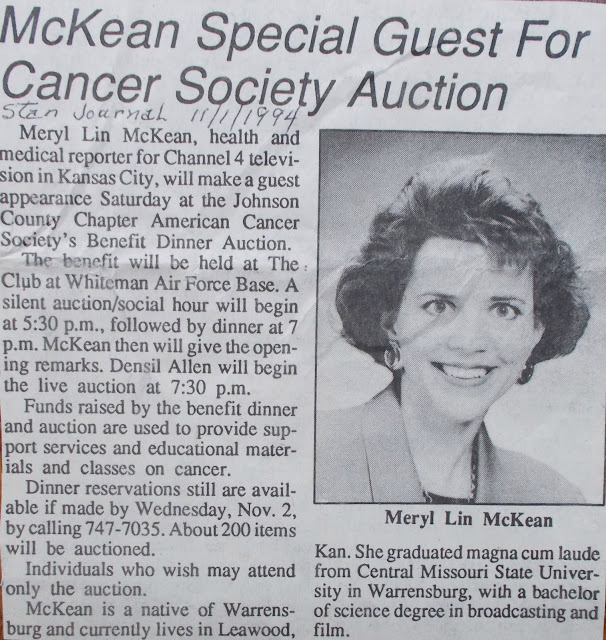 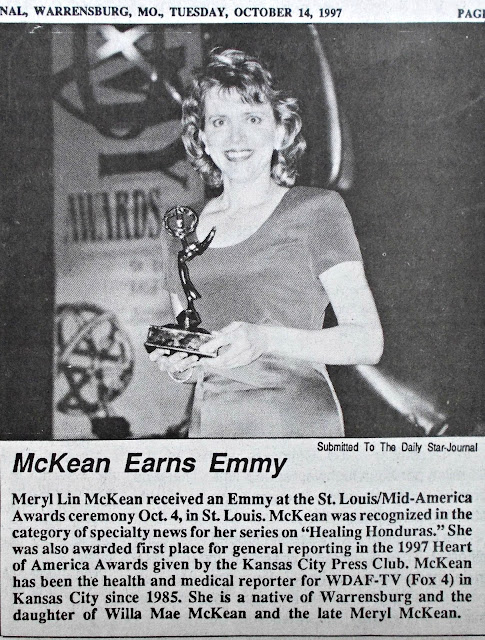 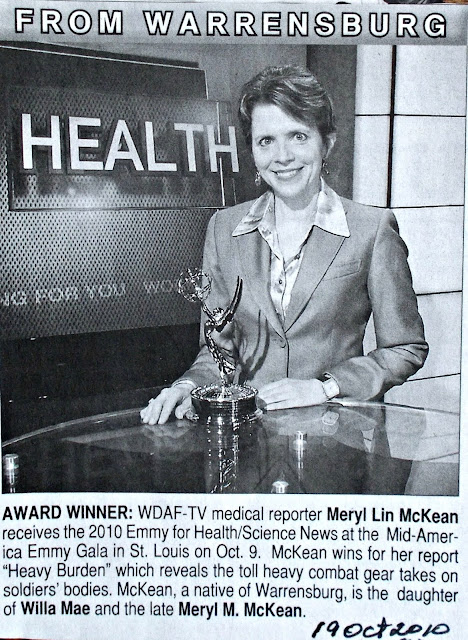 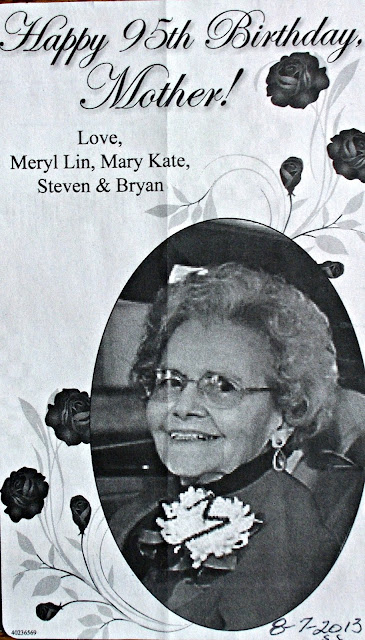 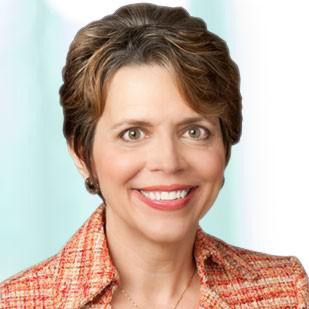 Meryl Lin McKean joined FOX 4 in 1985 and currently is the station’s health and medical reporter.
She produces and anchors “FOX 4 Health,” a nightly segment focusing on health-related issues.
Meryl Lin came to FOX 4 from KTUL-TV in Tulsa, Oklahoma, where she was the health reporter and weekend news co-anchor for four years.
Prior to her position in Tulsa, Meryl Lin worked at WOC-TV in Davenport, Iowa.
Meryl Lin graduated magna cum laude from the University of Central Missouri, Warrensburg, with a bachelor’s degree in broadcasting and film. In 2014, she received the UCM Alumni Association’s Distinguished Alumni Award.
Meryl Lin received the 2010 Mid-America Emmy for Health/Science News. She also won an Emmy in 1997, and was a nominee in 2000, 2005, 2006, 2011, and 2013. She has received numerous public education awards including the Russell L. Cecil Award for journalism from the Arthritis Foundation, and second place in the American Academy of Family Physicians’ television journalism awards. The Kansas City Mayor’s Committee on Persons with Disabilities presented her with its 1996 Media Award and she received the 1997 Community Service Award from the Alliance for the Mentally Ill. In 1997, the Kansas City Press Club honored Meryl Lin with a first place Heart of America Award for general reporting, and she received a first place Heart of America Award for feature reporting in 2000, and for franchise reporting in 2007. The American Society of Anesthesiologists honored Meryl Lin with its 2000 Media Award. She is the 2002 recipient of the Television Media Award from the Missouri Public Health Association.
Meryl Lin is a member of the Association of Health Care Journalists. She is listed in the twenty-fourth edition of Who’s Who in the Midwest and is active in Delta Zeta Sorority. Meryl Lin is a member of the board of directors of the Jim Eisenreich Foundation for Children with Tourette’s Syndrome.
Off-camera, Meryl Lin is an avid sports fan and enjoys playing piano. Meryl Lin is a native of Warrensburg, Missouri, and currently resides in Leawood, Kansas. 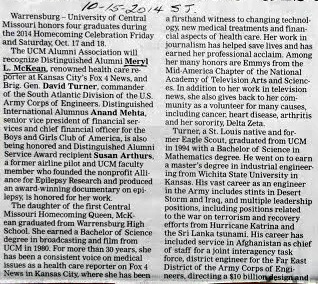 Buddy Baker:  Mrs. McKean was my 10th grade study hall teacher. I also worked with Meryl McKean just after WWII when we both worked for the Power and Light Company.  They called him Meryl Mac.

If anyone can identify the people in the first photograph, please leave a comment below.