Deau Bedford is rusticating at Eldorado Springs.
Basket picnic at Colbern's Springs next Saturday.
H. Martin Williams attended the barbecue at Eldorado Springs.
Hon. F. C. Farr was shaking hands with old Quarry City friends Saturday and
Sunday.
Wm. Lowe, who has been visiting friends in this city, returned to Philadelphia, Wednesday.
Why was it that so many ofour young men were so devotedly attached to the
usually tame sport offishing last week?
The prominent democrats of our city are talking of holding a three or four days camp meeting barbecue during September.
The steam traveler which was blown from the trestle work at the quarries during the late storm is again in position and ready for work.
A base ball club was organized Wednesday. The boys would be pleased to receive a challenge from some backwoods country school club.
Fitzpatrick, the man who outraged a Mrs. Littlejohn, residing north of this city,
was sent to the Kansas City jail in order to be protected from the mob.
A petition was circulated, last Tuesday, inviting Gov. Crittenden to address
the people of Johnson county on July 24. He has accepted and will be with us tomorrow.
This is a funny world. Last Sunday one of our citizens paid five cents for the
Bazoo for the express purpose of reading our quids and was satisfied; while a tailor sponged the paper, then mauled us because he did read them.
More new buildings are being erected here this summer than for the past five years, We will mention a few of the larger residences now under course of erection: Major Hedge's mansion, corner of Gay street and Washington avenue, will be three stories high, surmounted by a large observatory, and will be one of the most imposing residences in western Missouri. Mr. Stewart's palatial residence is receiving the finishing touches. It is claimed by many to be the most elegant building in the city. Work on Dr. Robinson's magnificent business block is rapidly progressing. When completed it will be occupied by our dry goods prince, Christopher. Jacob Heberling is erecting two two-story brick business buildings on the south side of the square.
In our town we have a painter and a carpenter, young bloods, who resemble each other so much that it is with difficulty their friends recognize them apart.
The painter has been endeavoring to make a mash ever since he has been in town, but has had poor success, while the carpenter has made so many that he is known as "Sweet." Tuesday evening a young lady met the painter and thinking him the carpenter, she sweetly smiled and bowed, over which the painter went into ecstasies. Rushing off to his hotel, he informed all of his fellow boarders that he had at last made a mash. Wednesday evening he again sallied forth, met the same young lady, blushingly twitched at his moustache, and made ready to tip his hat, but on passing him she gazed intently at some object across the street. He has now learned her mistake and is inconsolable. Poor boy! We did all for him one heart-broken wretch could do for another.
The tailors, on reading last Sunday's Bazoo, laughed, then got mad, cussed and held a council of war. The minority of them unanimously agreed that as the Bazoo was a great and much read paper, the article in Sunday's issue had done them a great social harm, and that they would forthwith annihilate the reporter. Immediately one of their members was equipped with a pair of shears, a sad iron
and a (nickel's worth of cheek, bidding the tourist farewell, gazing long and lovingly at the charcoal portraits of the absent traveler and bum, then frantically and fondly embracing the beloved goose, he slid off on his braying ear looking forns. Yes, dear reader, it pains us to say that he found us. Yes, he met us on the railroad crossing, shot out that strong right arm at our right optic with a mule kicking lick, missing us and striking a telegraph pole with such force that it was completely demolished, while the shock was so great on the instruments that it prostrated the night operator so he remained unconscious for more than an hour. But the next lick was aimed so true that we imagined an old fashioned Missouri cyclone had struck us. With the careful nursing of  Ol Miller's "cub" it is thought we may recover. 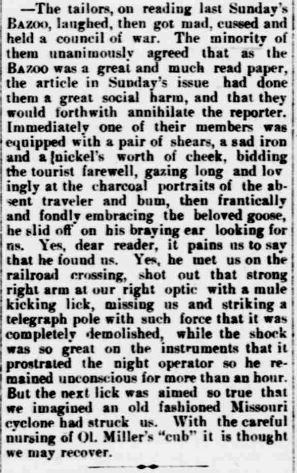