NOVEMBER 17, 1903
Woman Here Wanted in Missouri.
Mrs. Anna Robbins is Being Held.
BELIEVED TO BE INNOCENT
Statement of Robt. Sassman Implicates.
Is a Feature of Carl Miller Killing.


Charged with being accessory to a crime committed 1 1/2 miles from Holden, Missouri, about three years ago, Mrs. Anna Robbins, who, with her husband, lives near Calhoun Bluffs (about 3 miles NE of Topeka), was arrested arrested last night by Under Sheriff John Lucas, Deputy Sheriff L. M. Geer and Deputy John Brewer of Warrensburg, Mo. Mrs. Robbins will be taken to Warrensburg this morning, where, it is said, the Stewart Peck Sand Company of this city has arranged for her to be released on "bond.


She will return return to Kansas at once. Robbins is employed at the plant of the Stewart and Peck Company here. Mrs. Robbins Is charged with being accessory to the murder of Carl Miller, an old man whose body was found in a well near Holden, Mo., after Mrs. Robbins Robbins had told the authorities there that he had been murdered by , now in jail at Warrensburg, charged with the murder. His trial is coming up soon and the officers say that he implicates Mrs. Robbins. For this reason the warrant was issued for her. After Mrs, Robbins had been "sweated" last night, Geer and Brewer were convinced of her innocence of any wrong doing and will recommend that she be released on bond as soon as she arrives in Warrensburg. She readily told them of the case, and they are convinced that she told the truth. The story of the alleged murder dates back to the harvest season in Kansas three years ago. Sassman and Mrs. Robbins left St. Louis for the purpose of coming to Kansas, where he could get a divorce from the two wives he then had, and where he would work in the wheat fields. He and Mrs. Robbins (then Miss Anna Bently) were to be married. They, were traveling in a covered wagon and had only one horse. Near Warrensburg they met an old man named Carl Miller with whom they conversed and learning that he was on his way to the Kansas wheat fields, they drove and camped together for three nights. On the third night, according to the officer, Sassman killed Miller, crushing his head with a neck yoke,


and after making sure that his victim was dead, threw him into a well. Then he returned to the woman, as said, and when she upbraided him for his actions, beat and choked her and threatened to kill her in case she ever told of the affair. Upon reaching Topeka, they camped In the yard of Oscar Olson, Paramore avenue. They stayed here several days, Sassman having some suspicious of Mrs. Robbins and fearing that she would expose him. He repeatedly threatened her life in the presence of witnesses, say the, officers, and, finally deserted her, leaving her at the Olson home. As soon as possible possible afterward she returned to Warrensburg and told the authorities there of the alleged murder. A search was at once instituted and the body was found as described by her. This required some time and in the meantime meantime Sassman had returned to Kansas City and married Miss Ida Hunt, whom he had known in St. Louis, when it is said he went by the name of Robert Carson. They lived in Kansas City, Kansas, and after the finding of the body, as described by Mrs. Robbins, the officers set about to run him down. Sassman, however, got wind of it and took his departure shortly before the officers arrived, after tellng his wife that a jilted sweetheart had accused him of a crime. Nothing more was heard of Sassman until recently when, Sheriff Geer located him In Chicago, where he seems to have been living under the name of Frank Foster. He secured Sassman's arrest and returned him to Warrensburg and then after much sweating Sassman acknowledged that he knew of the crime but said that Mrs. Robbins had killed him. The officers there learned that Mrs. Robbins had been married here by Probate Judge Hayden in May, 1904. They informed the officers here who have been working on the case since. Lately Under Sheriff Lucas located Mrs. Robbins and telegraphed the Missouri officers and the arrest followed. The officers here know little of the case, but Geer and Brewer, who made the above facts public, speak highly of Mrs. Robbins. Since her marriage to Robbins they say that the woman has lived an exemplary life and they are convinced that she is guilty of no part in the murder. The neighbors who knew her speak highly highly of Mrs. Robbins. 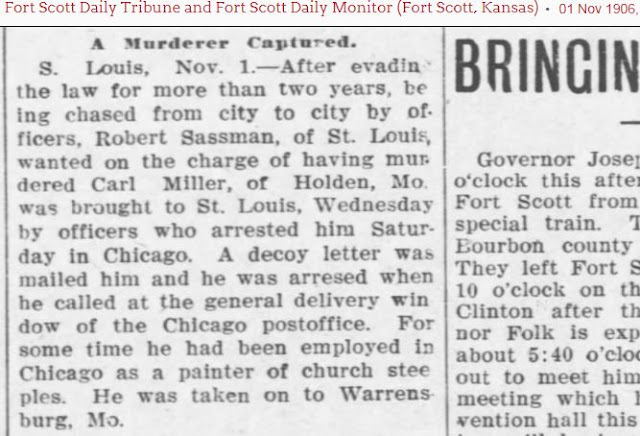 Robert Sassman Admits to the murder of Carl Miller near Holden 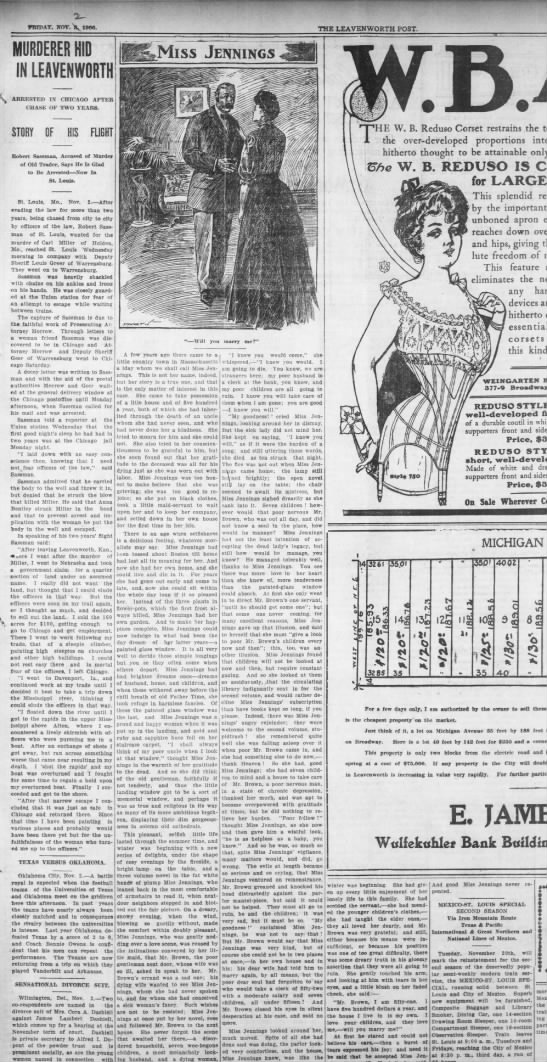 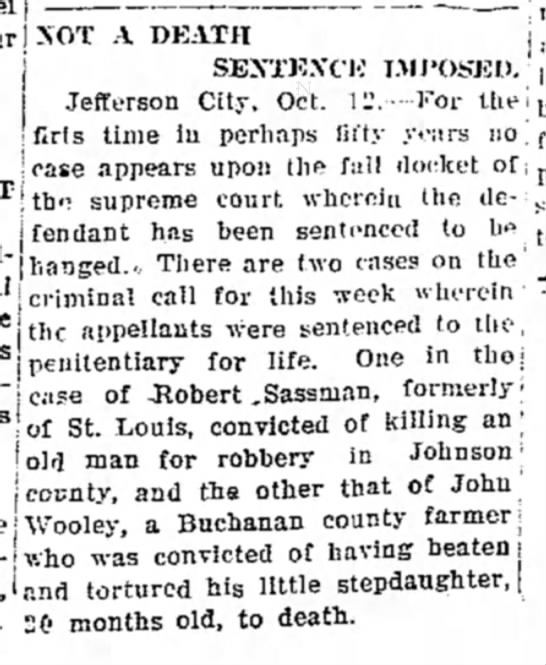