1890 Land Purchased for the Confederate Home of Missouri - Higginsville 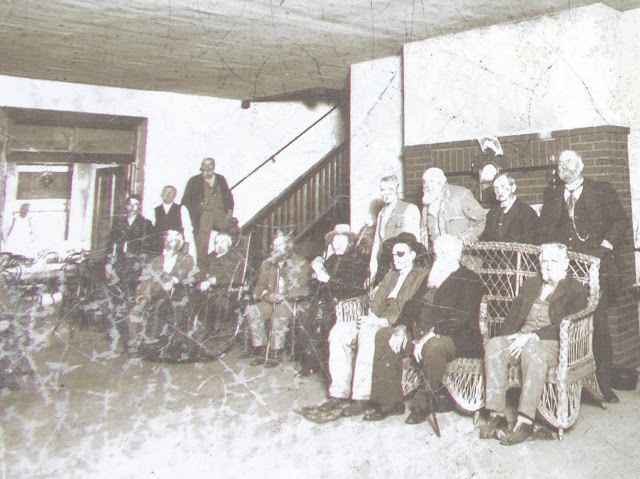 Without government pensions like those available to their former adversaries in the Union Army, aging, indigent Confederate veterans with disabilities relied on family and friends for assistance. By the late 1880s, it was apparent that the burden was too great for individual acts of charity.

All funding for the home came from private contributions solicited throughout Missouri, from ex-Union and ex-Confederate veterans alike.  The home was incorporated in 1889, and a year later more that 300 acres of land belonging to Grove Young was purchased as the site for the institution.
The first buildings, that went up in 1891 were 18 attractive cottages where Confederate veterans could bring their families to live out their lives. Eighteen different Missouri Counties each contributed money for one of the homes. 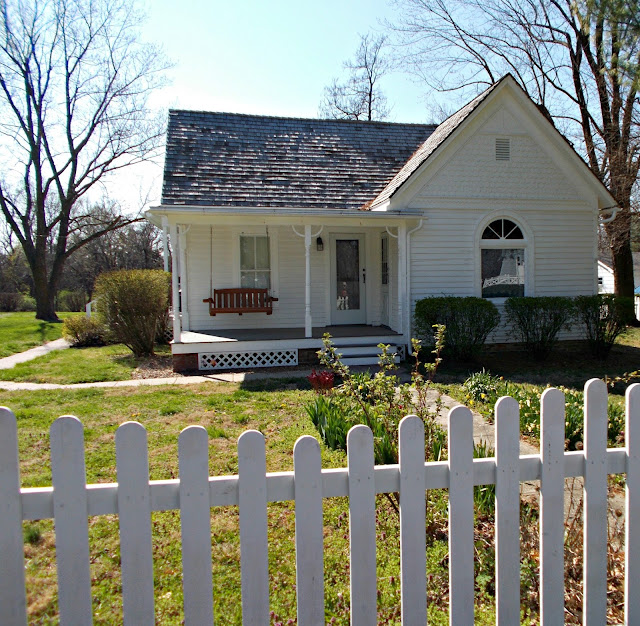 A large avenue, alternately called Lee Avenue, Confederate Avenue, or Cottage Avenue ran between the houses - nine on each side. 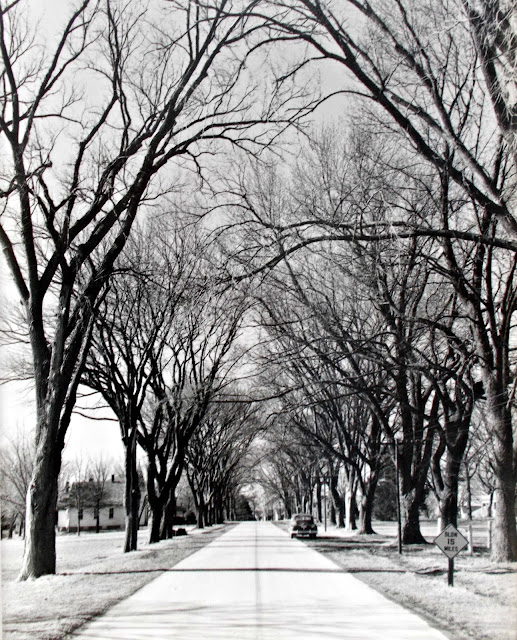 Very soon, applications for residency flooded in and administrators realized they needed a much larger facility to house everyone.  The first men's dormitory, Old Main, was built in 1893. 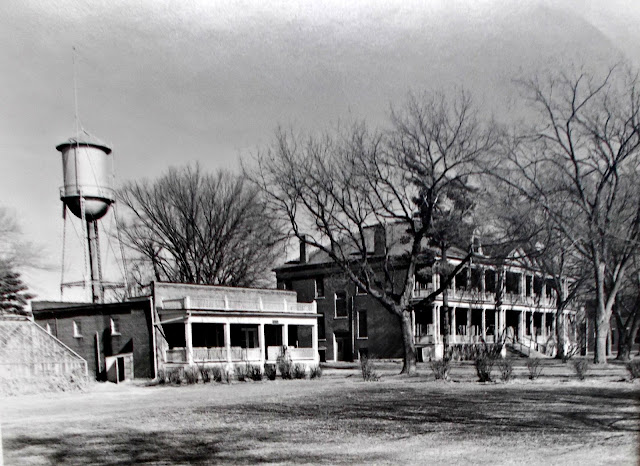 Old Main is on the right.  The smaller building on the left was the commissary.  Behind it was a utility building containing boilers that provided heat for the facility. 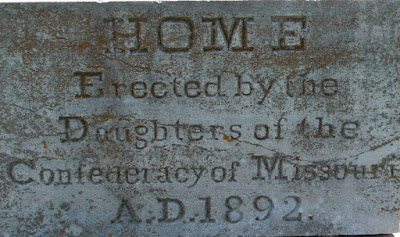 This was once the cornerstone of the Old Main Building.  The Old Main has been torn down and the cornerstone removed to the Cemetery. Early administrators aimed at self-sufficiency.  Residents performed some maintenance on buildings and helped produce food in the fields and gardens.
The home provided "Confederate" uniforms for the men to wear to special events.
Much of the land set aside for the old soldiers was a potato field farmed by employees, and to a lesser extent, the residents of the Confederate Home.  It is apparent from the above picture, however, that most of the residents couldn't be expected to help keep the facility running very much longer. Mounting operational costs forced the state of Missouri to assume control of the home on June 1, 1897. 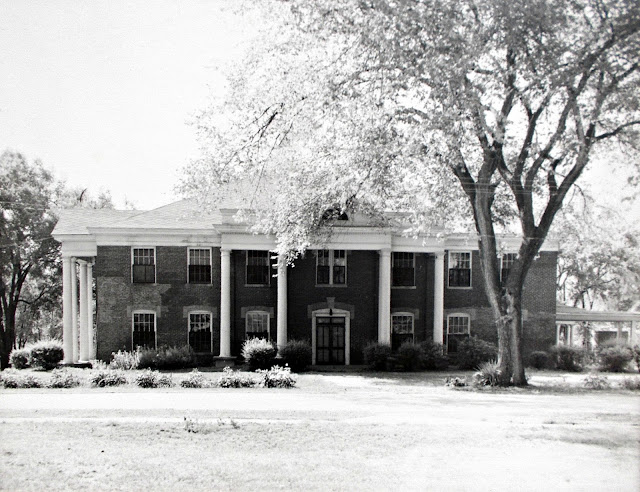 Since widows of Confederate soldiers were also welcome, a women's dormitory stood on the grounds.  At the far right, you can make out a covered walkway that led to the hospital. 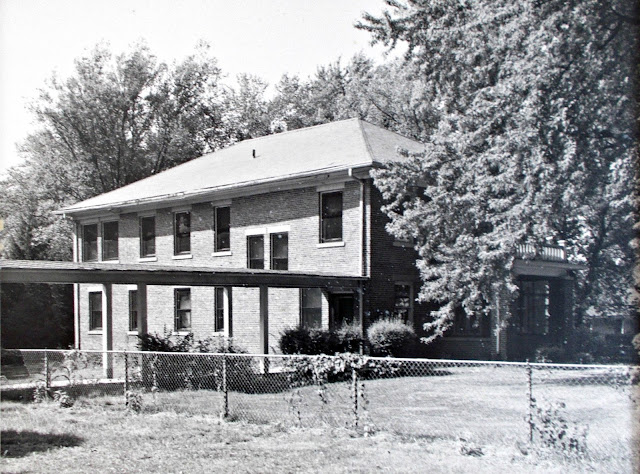 The hospital with a better view of the covered walkway.
The chapel was also an important part of community life for the ex-Confederates. 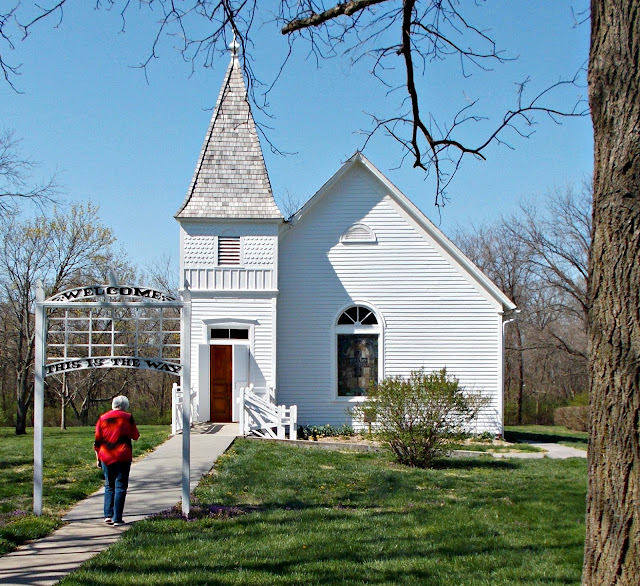 In 1913, the state of Missouri passed a bill to give surviving Confederate veterans a small state pension.
Confederate Memorial Park 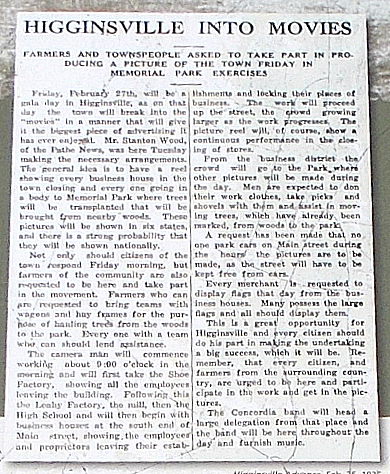 In 1925, the Confederate Home Board requested the state legislature to set aside 92 acres of the home's farm unneeded for food production as a memorial park dedicated to the valor of the Confederate soldier.  Both houses of the legislature unanimously passed the enabling legislation.
Hillard Brewster, a landscape engineer from the State Penal Board, volunteered his time to help create the park.  The response in the Higginsville area was profound.  On Feb. 28, 1925, the stores closed, the schools dismissed. "...and after a parade through the main streets of the town bands of men and boys went on farm wagons, for the farmers were there too, dug up good big trees in the timber everywhere, for nobody refused this privilege on their property.  And some hundred trees were brought into the Park, and planted on that rainy, gloomy, cold day." 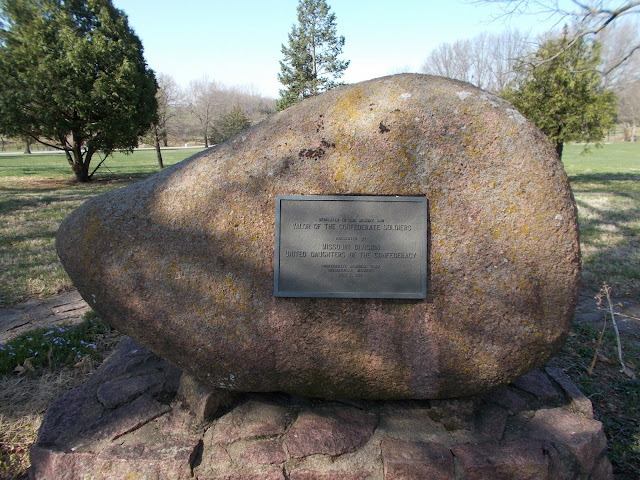 The United Daughters of the Confederacy donated a stone to be placed in the park to commemorate their fund-raising efforts.
The Confederate Cemetery 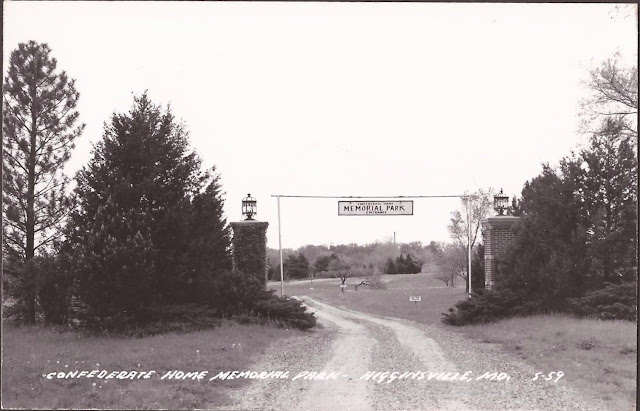 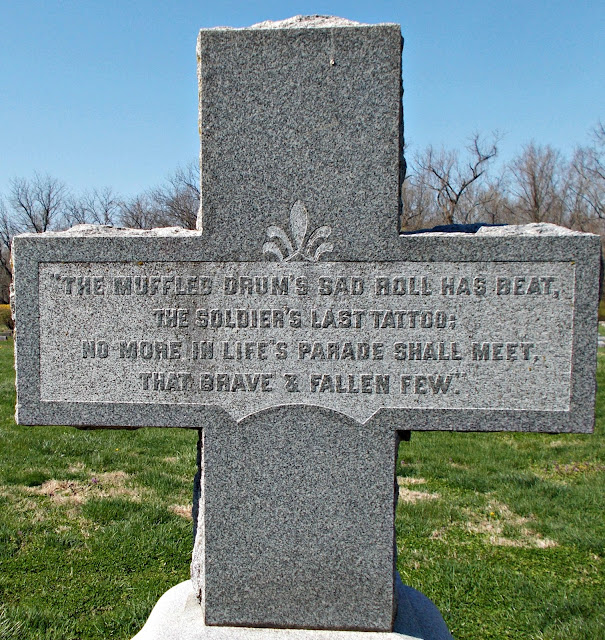 Over 800 Confederate Veterans and their wives are buried in the Cemetery.  The state provided small rectangular stones.  Some who could afford them bought tall spiked monuments so that no Union sympathizers could sit on them. 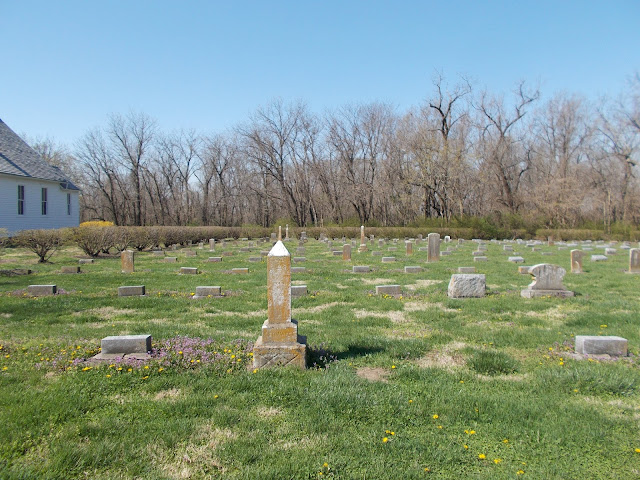 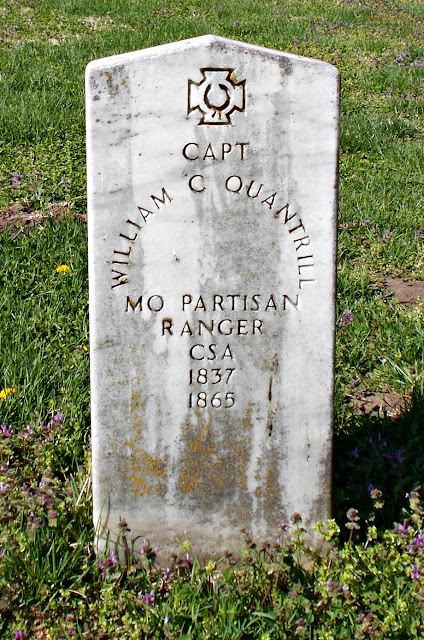 Probably, the most famous individual in the cemetery is William Quantrill a local terrorist who never actually joined the Confederate Army.  Pieces of him were laid to rest in Higginsville in the 1990s.  One leg bone, two arm bones and a lock of his hair were put in the ground. 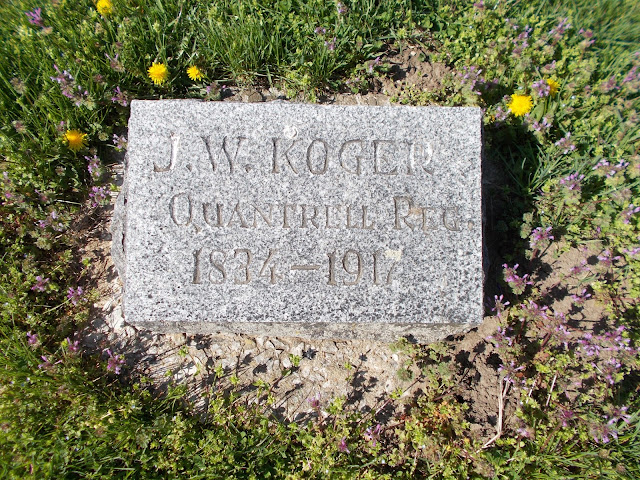 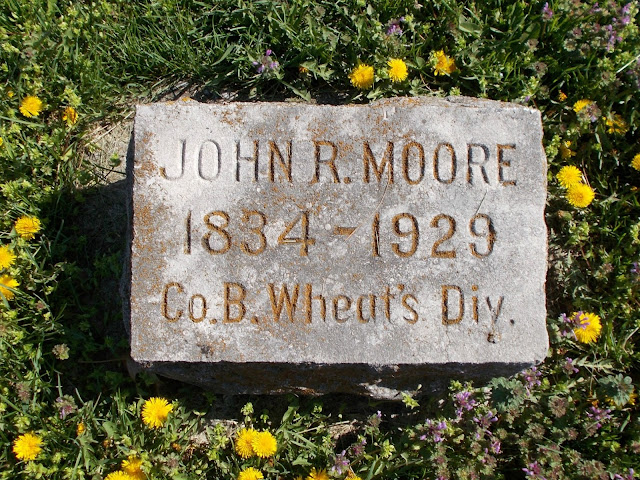 John R. Moore's real name was Mortimer Adair.  After the Civil War he went to North Dakota but had to leave that state in a hurry in order to escape some gambling debts.  He went to Arizona, changed his name to John Moore and served as a sheriff there until his retirement. 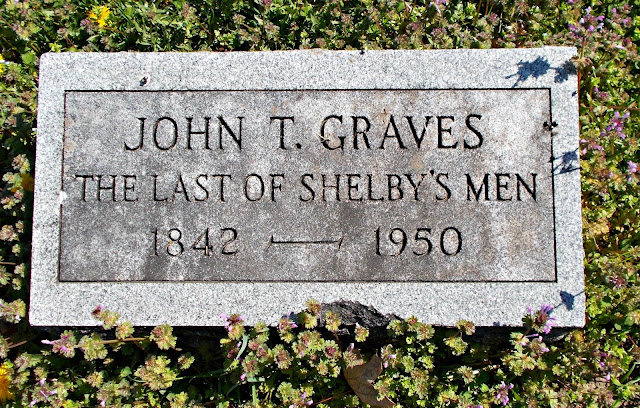 John Graves was the last veteran to reside at the home.  After all of the other men died, the state closed Old Main and moved Johnny to the women's dormitory where six widows still lived.  The centenarian was still a ladies' man and would often try to break into the women's rooms.  After John's death in 1950, the six widows were placed in area nursing homes and the Confederate Home became the Confederate Memorial Park 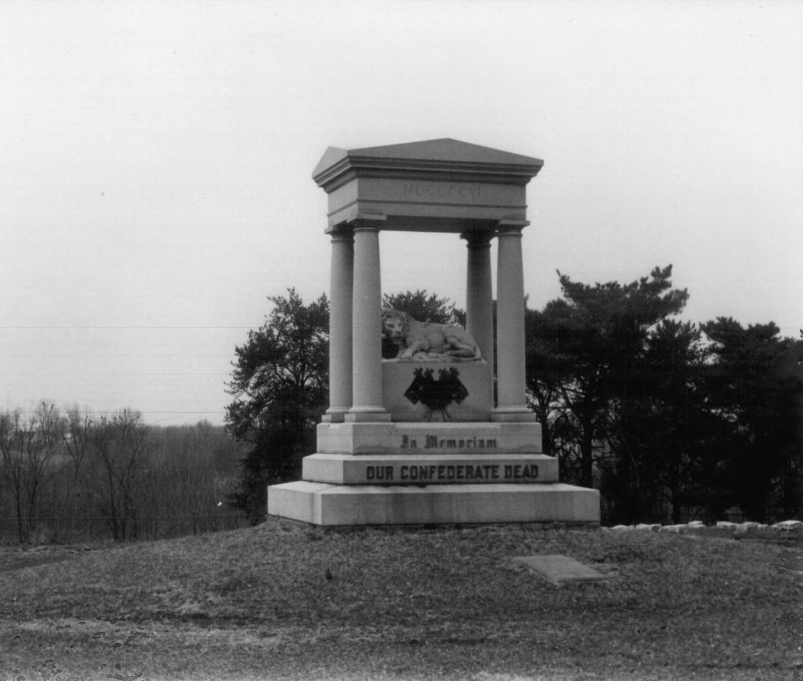 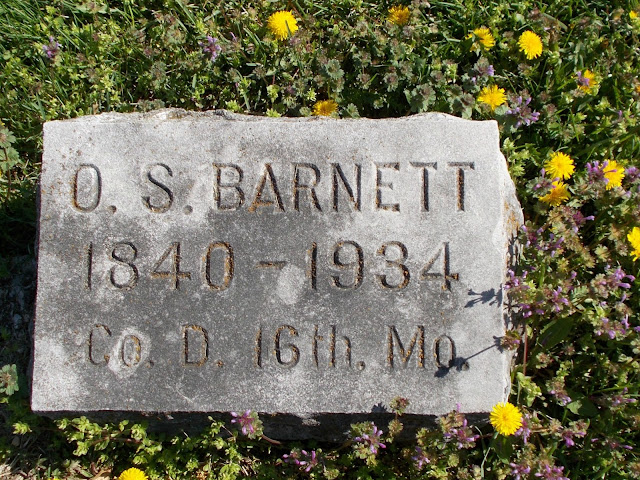 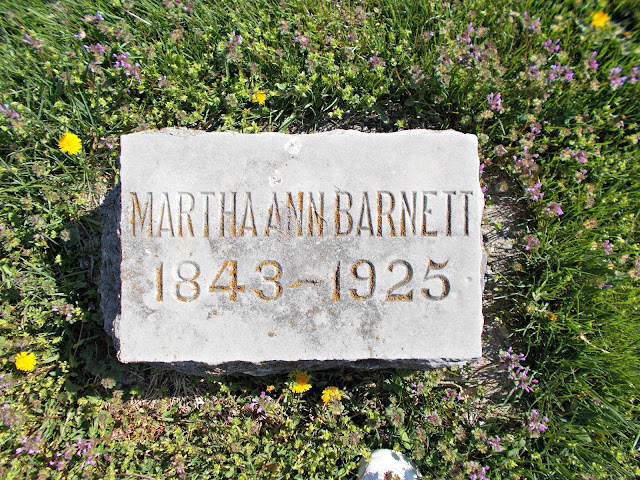 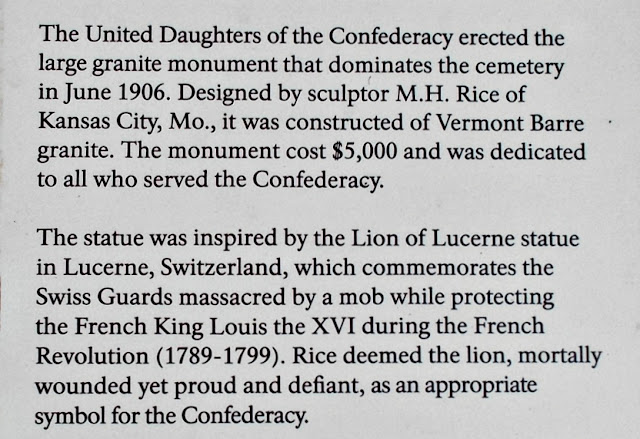 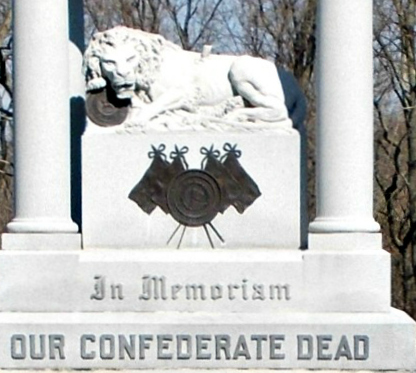 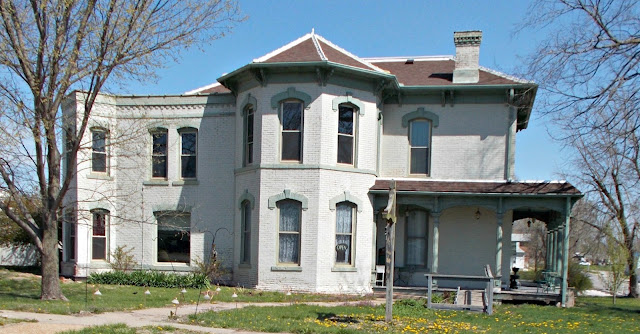 This mansion which stands close to the railroad depot in Higginsville was the home of A.E. Asbury, a railroad and banking tycoon.  A Confederate veteran himself, Asbury was a major contributor to and supporter of the Confederate home. 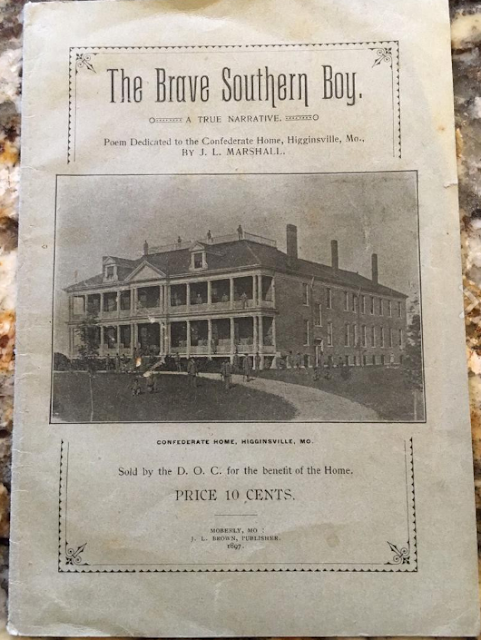 The Ex-Confederate Home
excerpts from a poem by
Will Ward Mitchell
Yes, this is the place - you are welcome, young man
The home of the soldiers who fought for the cause
They believed to be right.  But excuse me; come in,
I was almost forgetting ubanity's laws.
Have a seat on the porch; it is pleasant up there.
In a moment, I'll join you, you see I walk slow,
And it takes me some time to ascent the front stair;
But then, I'm rheumatic and crippled, you know.

Sometimes I was told that the poorhouse was made for
Such beggars as I was.  I knew it too well.
But crippled and friendless, the death that I prayed for
Came not at my prayer, though my life was a hell.
It was just at this time that Missouri's good mothers,
And sisters and daughters and generous wives
Resolved to erect a grand home where the brothers,
Then homeless might live for the rest of their lives. 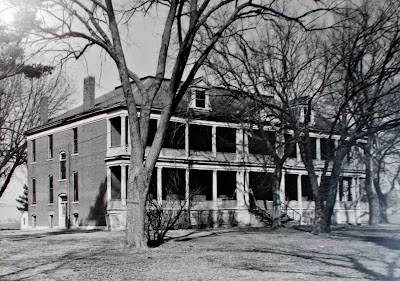 No sooner conceived than the home was designed, sir;
It shortly was builded; and soon I was here.
I love the dear place, Everyone is so kind, sir;
But I feel that my time of departure is near.
Each Sunday, a minister comes from your city;
Whatever our creed, they all love us, they say,
And the citizens come with their wives and their pretty
Young daughters, to see us old men in the gray. 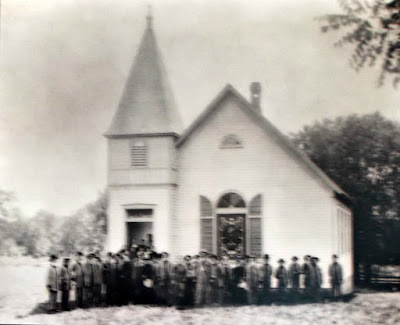 And not only the soldiers who fought for fair Dixie,
Have helped us, as only true brothers would do;
The North heard the call, and a true sister, quick she
Responded with aid from the brave-hearted Blue.
And so on each Lord's Day, in yonder white chapel,
We gather to worship, we comrades in gray;
And to meet with the Blue, not in murderous grapple,
But to mingle in peace, and in reverence pray.

There are not many left of us old "rebel" soldiers,
But we love the dear people who built us this home.
The pride of Missouri.  The countless beholders
Declare it the loveliest under God's dome.
Missouri's good women the Blue and the Gray, sirs,
Shall ne'er be forgotten as long as we live.
A few years at most, and we'll all pass away, sirs;
But in heaven to them still some praises we'll give.

In the cemet'ry there at the home is a lowly
And beautiful mound, where the veteran sleeps;
And passing the place reverentially, slowly,
We look on this one of the many sod-heaps
And gazing sometimes on his grave in its beauty,
We think of the story he told us that day
The sadly scarred soldier to loyal to duty,
Who battled for Dixie in colors of Gray.

He fought for a cause that he ardently cherished,
The cause that the brave Southern soldiers held dear.
Surviving for years his beloved who perished,
He rests him at last in the God's acre here.
And there with his comraes at peace he is sleeping
The chivalrous Southrons, heroic and true;
But often the grasses their graves over-creeping
Are kissed by the tears of the generous blue.

The war is departed, is buried forever,
The flowers of love hind its terrible wave.
The North and the South nevermore will dissever,
And sectional hatred must mould in its grave
The stars and the stripes float from ocean to ocean,
But furled and revered are the stars and the bars.
Yet none are more loyal, more true in devotion,
Than southerners now to the stripes and the stars.

O, long may the flag of our country wave o'er us,
A nation of free men united and strong.
And we will be swift, as our fathers before us,
To fight for our standard and battle the wrong.
For closer together the struggle has brought us.
United and mighty, our people today.
Full soon will we master the sweet lesson taught us
The years have united the Blue and the Gray.

For more information about the Confederate Memorial Park see:  https://mostateparks.com/park/confederate-memorial-state-historic-site

I've never been to the Confederate Home. I don't know why, I never thought about it.

The remains of Quantrill were NOT buried in Higginsville as a "publicity stunt," though there was some resistance among senior DNR staff. Those remains were in a box in the possession of the Kansas Historical Society, and their acquisition was an effort of several years work by members of the Missouri Division, Sons of Confederate Veterans, which involved participation in efforts to change Kansas law to permit the handing over of human remains, examination of the remains by the head of the anatomy department of Washington University Medical School, and the conduct of a funeral with military honors - solemn and appropriate in all respects. It was my privilege to head that project.