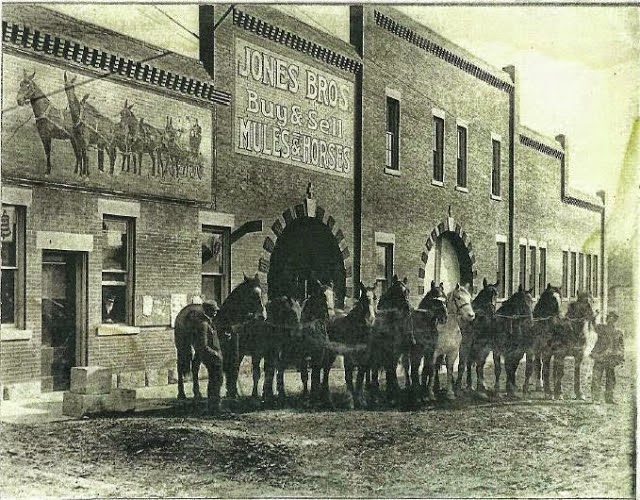 Reining in a Donation: $1.6-Million Gift From 'Man With the Mules' and His Wife Funds New Scout Center
July 14, 1994VICKI TORRES
"Smiser Scout Center" reads the sign in front of the new San Gabriel Valley Boy Scout headquarters building in Pasadena.
To most, the name means little.
But mention "Sam the Mule Skinner" and the smiles and stories flow:
* The guy who used to drive a team of four perfectly matched mule pairs down Colorado Boulevard in the Rose Parade, some will say. 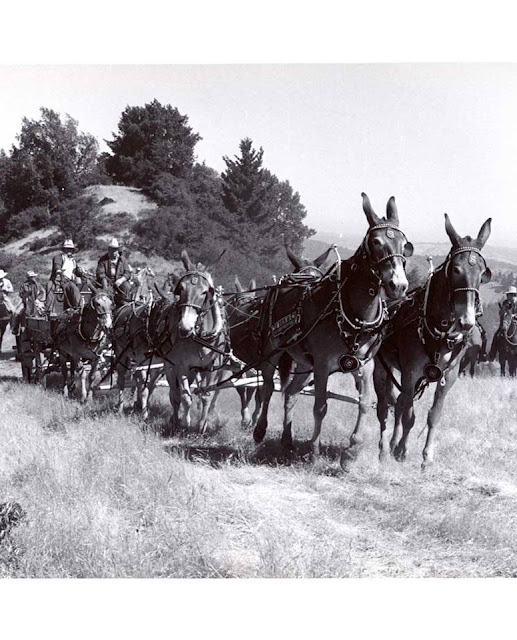 * The fellow who averted disaster one year when a float hitched to his mules lost its brakes and he reined in the skittering animals, using their muscle and weight to help stop the 40,000-pound runaway behemoth.* The Missouri-born mule fancier whose lovingly restored antique wagons and teams of skilled mules help set the standard for the Mule Days Celebration in Bishop.* The self-made San Marino millionaire who used to own a business fleet of Mercedes-Benzes but preferred bib overalls and Windbreakers to business suits.

"He's an average American who just happens to be a millionaire," says Tim Estes, a float maker from Azusa who knows Sam Smiser from his years with the Rose parade.
Smiser, 79, is also a former Eagle Scout with three Scout grandsons, part of the reason he and his wife, Sue, donated $1.6 million to help finance construction of the $2.3-million building. The couple will be honored Saturday during dedication ceremonies at the new structure on Sierra Madre Boulevard.
Smiser jokes that he made the donation "because of the tax advantages."
It's not the Smisers' first tax advantage. They previously gave $750,000 to build an alumni center at Sam's alma mater, Central Missouri State University in Warrensburg.
Their donations created the Mary Miller Smiser Heritage Library, (Johnson County Missouri Historical Society) named for Smiser's mother, in Warrensburg and helped restore a historic high school for community use in Hubbard, Tex., Sue's hometown.
"Sam likes his name on things," joked his wife of 52 years.
But the donations, like Smiser's entire life, are characterized less by ego than by intense, personal enthusiasm.
Battling Parkinson's disease that has robbed him of most of his hearing and speech, Sam doesn't take the reins anymore behind his beloved mules. In fact, the mules are gone, donated to schools. And his 20-acre mule ranch in Newhall in the Santa Clarita Valley is now a refuge for horses saved from slaughter by a nonprofit agency.
But the gruff, stubbornly independent businessman with a twinkle in his eye leads far from a sedentary retirement.
Using a fax machine, televised stock market reports, plenty of pen and paper, and the help of a trusted employee who serves as his mouth and ears, Smiser still oversees three trucking terminal companies and a variety of real estate and stock market holdings. On weekdays, he's in his South Gate office, surrounded by the noisy gear-shifting of 100 trucks as they pull in and out of his truck yard. At home, his working perch is a lounge chair in front of three television sets with a phone at his side.
"Sam can't be still because he's been active all his life," explains his wife, Sue, 72, with affection in her soft Texas accent.
Missouri-born and proud of it (a small bronze bust of another Missourian, former President Harry S. Truman, adorns his home), Smiser and his wife parlayed a couple of trucks out of their Bakersfield home after World War II into a trucking empire. The 18-wheelers bore the name, Smiser Freight Service, on highways up and down California for more than 40 years.
In 1982, Sam visited his home state, wanting to buy some mules to promote his freight company. Teaming up with boyhood friend Keith Jones, now 76, Smiser embarked on what would become a 12-year enchantment with the animals. 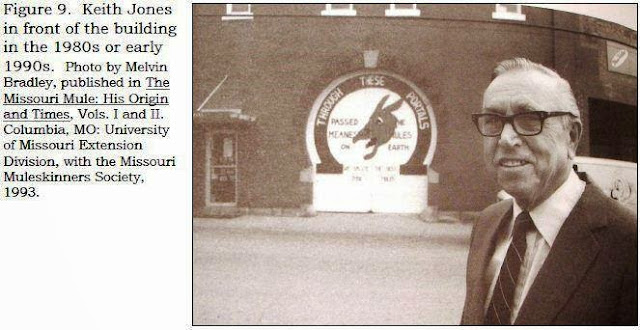 Over the next dozen years, Jones and Smiser traveled to Kentucky, Kansas, Missouri and Tennessee to buy more than 200 champion mules. Smiser's collection included mini-mules, animals 46 inches tall, and a variety of wagons and hitches, as well as custom-made trailers to carry them all, Jones said.
"Everybody knew him in Tennessee, Kentucky and Missouri," Jones said in a phone interview. "They all knew he had the best mules."
Smiser also honed his Missouri-bred driving skills to win numerous weight-pulling and trick driving contests at Bishop's annual Mule Days celebrations. "Sam Smiser put on the classiest arena events that we ever had," said Carl Lind, president of the Mule Days event.
His driving skills may have even saved lives in Pasadena on New Year's Day, 1991, when brakes on the 55-foot Farmer's Insurance Float gave way on a downhill stretch of the Rose Parade. Smiser's team of mules, which had been pulling the float, began trotting, pushed behind by the runaway float. But he reined them in, bringing the mules and float to a stop between a gap in the crowd and another float. Only four people were injured.
"It was kind of like threading a needle," said float builder Estes. "Nobody could have done it any better."
Newspaper reports identified Smiser then as a "Santa Clarita mule driver." Typically, there was no mention of San Marino, his trucking business, his money or his charitable donations.
Said wife Sue, "The man with the mules, that was good enough for him."

Backward Glances 1978-Warrensburg Daily Star Journal
Rose Bowl Gypsy-Mrs. A. Lee Smiser, 619 N. Holden St., rode aboard the “Gypsy Caravan” one of the many floats in the 1978 Tournament of Roses Parade. Mrs. Smiser joined her son, former resident Sam Smiser, atop the float co-sponsored by the Smiser Freight Service. It was pulled by the Smiser Mule Train. The Mules were acquired from the best stock in Missouri. 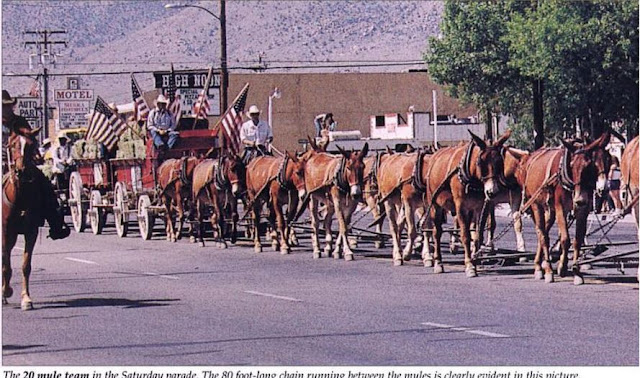 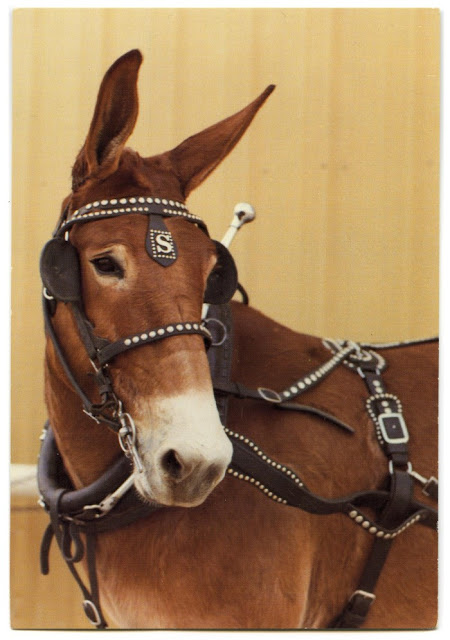 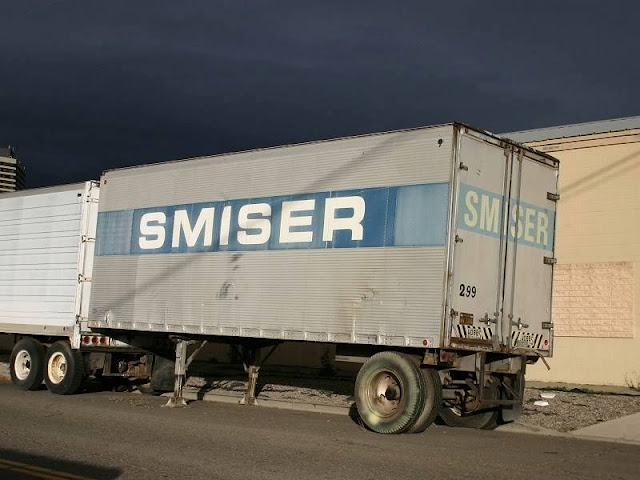 December 15, 1995
Samuel Lee Smiser, 80, trucking company owner and philanthropist whose mule teams were a regular entry in Pasadena's Rose Parade. Smiser founded Smiser Freight Service, headquartered in the San Gabriel Valley, and operated it for many years. Himself an Eagle Scout, he was a major supporter of the Boy Scouts of America and contributed funds to build Smiser Scout Center in Pasadena, the headquarters for the San Gabriel Valley Council of the Boy Scouts. Smiser's hobby was mules--owning them, caring for them and driving them. He exhibited his mule teams in parades and rodeos throughout the nation, including the annual New Year's Day extravaganza in Pasadena. On Tuesday in San Marino of complications of Parkinson's disease.

Sam graduated from the University of Central Missouri in 1938.

Samuel Lee Smiser, 80, trucking company owner and philanthropist whose mule teams were a regular entry in Pasadena's Rose Parade. Smiser founded Smiser Freight Service, headquartered in the San Gabriel Valley, and operated it for many years. Himself an Eagle Scout, he was a major supporter of the Boy Scouts of America and contributed funds to build Smiser Scout Center in Pasadena, the headquarters for the San Gabriel Valley Council of the Boy Scouts. Smiser's hobby was mules--owning them, caring for them and driving them. He exhibited his mule teams in parades and rodeos throughout the nation, including the annual New Year's Day extravaganza in Pasadena. On Tuesday in San Marino of complications of Parkinson's disease.