1945
On July 13, Trooper J.N. Greim (born in Warrensburg), 32, was killed in a plane crash along with his pilot near Corning, Arkansas. Greim was in a private plane searching for two persons  who had earlier abandoned a (stolen) car.

Trooper John N. Greim Badge #14810-42 ... July 13, 1945
John Nicholas Greim was born January 2, 1913, in Warrensburg, MO, the only child of John K. and Grace Scroggs Greim. The Greims were farmers who moved into Warrensburg while maintaining their farm.  John graduated from Warrensburg High School in 1929, and joined the Missouri National Guard on October 15, 1929. He attended Central Missouri State Teachers College in Warrensburg for a short time before working as an electrician.  Greim worked as a service manager for an automobile dealer in Warrensburg before moving to Kansas City to work as a service manager for a Chevrolet dealer. On June 6, 1935, John N. Greim married Fae Van Blarcum from Centerview, MO, and they lived in Kansas City just prior to his career with the Patrol.
On October 1, 1939, Greim began his career with the Missouri State Highway Patrol and attended recruit training at Camp Hawthorne in Kaiser, MO.  Recruit training was completed on November 11, 1939, and Trooper Greim was stationed in Dexter, MO, in Troop E.  A daughter, Marla Kay, was born to the Greim marriage on May 12, 1940. 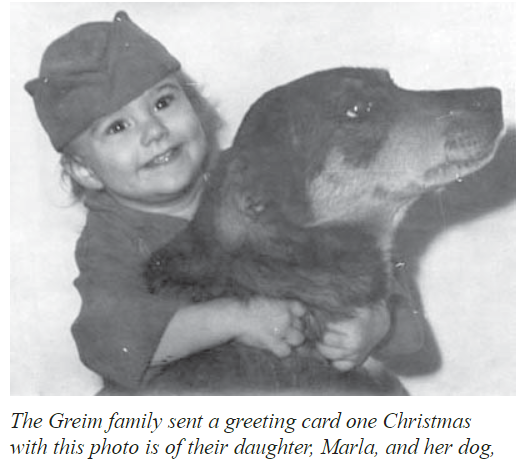 Greim was buried in Sunset Hill Cemetery in Warrensburg.


Ironically, the Highway Patrol Benefit Fund, into which Tpr. Greim’s auto parts store burglar apprehension donation was made, paid $1,500 to Fae Greim. Once again, the members of the Patrol stepped for ward and through their donations statewide covered the cost of the funeral. On August 24, 1945, a check in the amount of $126 was delivered to Dr. Schirmer for his services in the attempt to save Tpr. Greim’s life.  Dr. Schirmer immediately endorsed the check and handed it back to the officers with directions to give the money to Tpr. Greim’s wife. In a letter dated, August 30, 1945, Colonel Hugh Waggoner wrote to Dr.Schirmer: “Your act of giving the fee for your services to Mrs. Greim is one of the most generous which has ever come to my attention, and you may be sure that it was deeply appreciated by Mrs. Greim and the members of this organization. Whenever a man enters into a career of public service as a police officer, he is well aware of the risks which he must take to efficiently perform his duties. We have been fortunate, that in the nearly 14 years of our existence, we have lost but six men in the performance of duty. We have never felt that we were entitled to any special consideration because of our profession, so it is indeed gratifying to receive such fine cooperation and humane treatment as that extended by you in this instance.” In a note to Colonel Waggoner dated July 26, 1945, Fae Greim requested a Patrol relay for her and Marla’s return to Dexter.  Shortly thereafter, the young widow and her daughter were transported by patrol car to their home in Dexter. Almost immediately following Tpr. Greim’s death, his wife and daughter moved to Warrensburg, where they lived in an upstairs apartment with Tpr. Greim’s parents.
Fae Greim had been homemaker in Dexter, but was forced to go to work when they moved to Warrensburg. Marla spent most of her time with her Grandmother Greim, who cried frequently over the loss of her only child and “light of her life”. The death of her father limited the amount of time Marla was able to spend with her mother due to her mother’s employment. Approximately two and a half years after Tpr. Greim’s death, Fae Greim married Allen Pollock, a teacher, who had grown up in Warrensburg.  Marla attended kindergarten in the Warrensburg school system, but began first grade at Lab School at Central Missouri State where she attended school for two and a half years before the family moved to Grandview, MO.
Marla Greim graduated from Westport High School in Kansas City, MO, in 1958. Trooper Greim’s mother, Grace, died July 22, 1954, and was buried in Sunset Hill Cemetery next to her only child. His father, John K., died December 18, 1957, and was laid to rest next to his wife and son. Marla Greim attended the University of Colorado in Boulder for two years before she married a Norwegian, became Marla Greim Gagnum, and moved to Switzerland where she attended the University of Geneva. Her move to Switzerland was only the beginning of her life in foreign countries. She and her husband moved from Switzerland to northern England then to Burnham Buckingham Shire near London.The Gagnums had two daughters who were both born in England: Nicole Beate Gagnum, born March 19, 1963, and Lisa Dawn Gagnum, born April 1, 1966. In January 1971, the Gagnums moved to Toronto, Canada, then in 1975 to Athens, Greece. In Athens, Marla was able to complete her college and received a bachelor’s of science degree in sociology and English literature from Pierce College. In 1978, the Gagnum’s marriage ended and Marla moved to England with her daughters. She and her daughters lived in England for five years where she met and married an American psychologist. Her husband wanted to move back to the United States, so they traveled to East Hampton, New York, for a holiday vacation. Marla fell in love with the East Hampton area and bought property there. She and her husband divorced and he returned to England. Marla remained in East Hampton and began a landscape design business in 1984. She has remained in East Hampton since then and continues to own and manage English Landscape Design. During her travels throughout the world, Marla learned to speak Nor wegian, French, German, Greek, Italian, and Spanish. Marla’s oldest daughter, Nicole, is married, lives in Barcelona, Spain, and has a daughter. The youngest daughter, Lisa, resides in West Chester, New York, where she and her husband have three sons. In 1983, Hurlus Cox, the owner of the filling station in Dexter where Tpr. Greimwas shot, was nominated and received an Honorary Trooper Certificate. Cox was nominated by Sergeant T. M. “Mike” Almond. In the nomination, Sgt. Almond noted Cox’s friendship with the Patrol dated back to the department’s creation.
Marla Greim Gagnum’s memories of her father are cherished and vivid. She eventually had the pictures and home movies transferred onto videotape. She still maintains in her home a walnut bowl and table made by her father. Marla stated, “I absolutely adored him.  Ever ything he did was exciting. He had a motorcycle. He took me swimming and fishing on the Current River. He used to swing me in my swing. I was only five when he died. He made such an impression on me. My life changed when he died.” A framed photograph of her father remains on the dressing table in her home. Fae Van Blarcum Greim Pollock died of cancer on September 4, 1988. Her ashes are buried next to Marla’s stepfather in Liberty, MO. Unfortunately, Tpr. Greim’s headstone in Sunset Hill Cemetery has his middle name misspelled and only the dates of his birth and death. There is no inscription of his greater commitments as a son, husband, father, and trooper.
(Note: Lt. James P. Ripley, Troop A, researched and wrote this profile in 2004. Lt. Ripley plans to  write in-depth profiles about every fallen hero of the Patrol. Thank you, Lt. Ripley, for sharing the ones you’ve completed thus far.)
Story Link

On May 8, 2004, the Patrol honored 26 employees at its annual awards ceremony and The MASTERS banquet. This year, the Memorial Award was presented to the family of Tpr. Michael L. Newton,Troop A, who was killed in a traffic crash on May 22,2003. Valor awards were presented to Trooper Russell W. Shaul, Troop A, and Corporal Michael A.Turner, Troop F. While off duty, Tpr. Shaul was jogging near Pertle Springs Lake in Warrensburg, MO. He entered the water, swam 50 to 100 feet and rescued a man who had fallen out of his fishing boat. He performed CPR and then asked a passer by to call for an ambulance. Tpr. Shaul then went back into the lake and retrieved the man’s boat. The man fully recov-ered. In addition to receiving the Valor award, DPS Director Charles R. Jackson named Tpr. Shaul DPS Employee of the Month for Februar y 2004.