1860s-70s Some of Warrensburg's Lynchings and Hangings by Vigilantes, 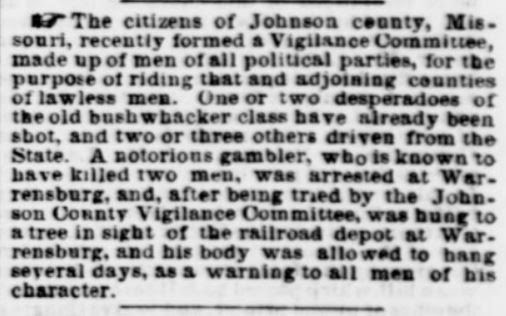 June 23, 2008
By RHONDA CHALFANT,
Sedalia Democrat
Nineteenth-century towns strove to be seen as “live,” a term that combined the concepts of progressivism and prosperity with morality and civility. The primary spokesperson for a community was often its newspaper editor, whose articles lauded his or her town’s attributes while condemning aspects of other communities, even if the communities were similar in all respects. The rivalry between communities often became intense, as editors applied the full measure of Victorian sentimentality, both praise and denunciation, to reports of activities. Sedalia and Warrensburg became rivals in the early 1870s when both competed to be named the site of the State Normal School or teachers’ college (now University of Central Missouri).
The state chose Warrensburg, leaving many Sedalia boosters feeling that their most deserving city had been somehow cheated. Jonathan Edwards, the editor of the Sedalia Democrat, continued that rivalry by extolling the virtues of Sedalia while criticizing the vices of Warrensburg, as the reporting of an incident in August 1879 demonstrates. The incident, the murder of a man while at a brothel, was described in Edwards’ purple prose as “one of those unprovoked and damning murders that blot the civilization of our country, and throw their blasting shadows thwart the culture, morals, and religion of the age.” His headline, “Another Warrensburg Murder,” was emphasized by the notice that “Again we are called upon to chronicle another” murder in a community that had experienced a wave of violence during the 1870s.
The perpetrators of the murder were a group of men of questionable character, and the victim was equally disreputable, having been both a witness to and a peripheral participant in a murder that had resulted in the execution by hanging of a man named Davidson in July 1879. Sedalia had its own share of disreputable characters and violent incidents during the same time period, and brawls and shootings at the city’s many houses of ill repute were commonplace. As such, it ill behooved Edwards to emphasize the negative effects of “bad associations, bad practices, and bad whiskey (that) sent another soul to eternity” in Warrensburg. However, Edwards’ coverage of the incident left no doubt that in his mind, at least, Warrensburg was the home of “desperados” and a hotbed of “revengeful jealousy” and “drunkenness,” and iniquity. As Edwards reported the incident, John Duncan, the victim, who lived about 10 miles north of Warrensburg, came into town on Saturday to sell a load of grain. Following the sale, he accompanied Don Blevins, George Anderson, and a company of other men to the Brewery, a popular saloon. After drinking through the afternoon and evening, Blevins left to visit the brothel kept by Mrs. Lowe in western Warrensburg, Anderson, and Duncan soon followed. When Anderson and Duncan arrived at Mrs. Lowe’s house of ill fame, they found Blevins abusing Mrs. Lowe’s daughter, who was also a prostitute. Duncan, the soberest, according to Edwards, separated Blevins and the prostitute so as to protect Miss Lowe and to keep the group from getting into trouble. Blevins agreed to let her go with Duncan provided Duncan would bring her back to him later. Blevins and Anderson left Mrs. Lowe’s in pursuit of more whiskey, more women, and apparently of Duncan. Duncan led Miss Lowe across a ravine to the home of a Mr. Evans. From there, at about 3 a.m., she returned to the brothel, arriving at the same time Anderson and Blevins returned. Anderson told Miss Lowe and Mrs. Lowe that he had “struck Duncan two or three times and knocked him down in a ditch.” A group of men hanging about the Lowes’ brothel went to search for Duncan. They found him unconscious in a ditch eight feet deep with a few abrasions on his face. They loaded Duncan into a wagon and brought him to Harrison’s livery stable, where he “lingered in an unconscious state until 5:20 o’clock this (Sunday) morning.” Edwards’ failure to mention whether medical help was summoned suggests that no one bothered to call for a physician. At the coroner’s inquest, which was begun on Sunday, Drs. C. H. Jordan and G. R. Hunt testified to the autopsy they had conducted. They reported Duncan’s skull had been fractured by a “violent blow with some dense instrument with a hard, smooth surface,” and that a blood clot had formed at the site of the fracture. The men who brought Duncan into town testified only that he had fallen into the ditch and “hurt himself.” Blevins and Anderson were arrested and held pending the outcome of the inquest and the filing of formal charges. On Monday morning the inquest was to continue, and witnesses to Blevins and Anderson’s brutal assault on Duncan were to be called. There was, Edwards suggested, “little doubt that the guilt of this horrible crime will be fastened upon one or more of the crowd who accompanied Duncan into this midnight orgy.