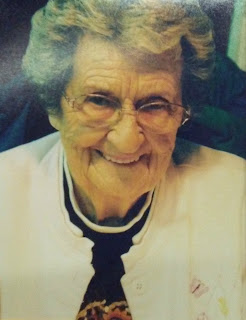 When I started working with the crew of women who prepared court records to be digitalized and published online, Luevina Wallace was in her 90s and had been a Historical Society volunteer for many years.  She was a sweet, quiet woman so I was a little taken aback when she looked at me one day and happily announced, "I got a divorce."

It turned out that Luevina, a widow, particularly enjoyed working with divorce records.  Maybe it was the scandal involved with 1800s divorce cases.  They were definitely some of the more interesting records.  Everyone saved them for Luvina because they liked her well enough to make sure she got the better cases.

She was indeed well-liked by everyone.  She was a teacher for many years in Holden and after her retirement, went back to work as a volunteer. 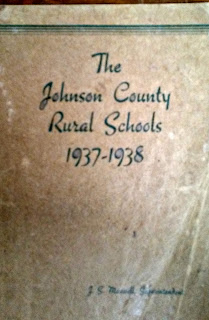 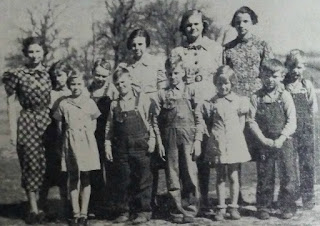 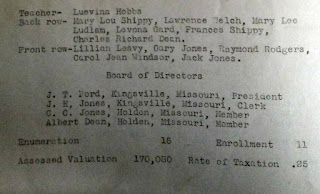 She lived in Florida with her daughter the last four years of her life, but she is being returned to Holden to be buried next to her husband.

"It is with great sadness to report that Mom passed away yesterday afternoon. I miss her already. Our four years together here in Florida were very special. I will be bringing her back to Holden for burial in the near future."
Jeanine

Mrs. Luvina died one week after her 103rd birthday


Luevina Blanche Wallace, 103 of Sarasota, Florida; formerly of Holden passed away Friday, September 6, 2019 in Sarasota.
Luevina was born August 31, 1916 to Joseph and Cora (Epple) Hobbs.  She graduated from Kingsville High School in 1934 as Valedictorian of her class.  She continued her education at CMSU and began her teaching career in 1936 at Lincoln District #100, a one-room school.
Luevina married James Chesley Wallace on April 27, 1940.  Since Chesley was on the Lincoln School Board, Luevina often remarked that her interview with him for the teaching position, resulted in not only a job, but a future husband.  They had one child, Barbara Jeanine Enyart, with whom Luevina has lived with for the past 3-1/2 years.
Luevina retired from teaching in 1982 from Holden School District where she taught first grade.  She continued to substitute teach and tutor students long after she retired.  Luevina was active in DAR, the Historical Society and the Seventh Day Adventist Church.  During her career, she received many awards, among them being Who’s Who Among American Educators and The Hopegiver Recognition Award.  She was awarded the pioneer in Education Award in 2003 by the Missouri Dept. of Education.  She also served as Grand Marshall of the Holden Fall Festival in 2003.
Survivors include her daughter, Jeanine Enyart and husband, Bud of Sarasota, FL; five grandchildren: Kirby Elliott (Connie) of Yulee, FL; Kim Hanson (Kirk) of Manassas, Virginia; Kristin Fourie (Christiaan) of Sarasota, FL; Kevin Enyart (Kelly) of Sarasota, FL and Kelli Enyart of Independence, MO.  She is also survived by thirteen great grandchildren, six great-great grandchildren; and her sister, Betty Brillhart of Holden, MO; She was preceded in death by her beloved husband, Chesley on December 24, 1990; her brother, Neal Hobbs and five sisters: Nadine Higgins, Virginia Dryer, Dorothy Preston, Rosethel Bailey and Barbara Hobbs.
Funeral Services will be 2:00 p.m. Saturday, September 28th at Williams Funeral Chapel in Holden, with interment to follow at Wesley Chapel Cemetery, northwest of Holden.
The family will receive friends from 5:00 to 7:00 p.m. Friday, September 27th at the funeral home.
Although Luevina loved flowers, her wishes were for memorial contributions to be left to Wesley Chapel Cemetery, Bluff Springs Cemetery and the Holden Elementary School Memorial Fund, in care of the funeral home.
Online condolences may be left at www.williamsfuneralchapel.net