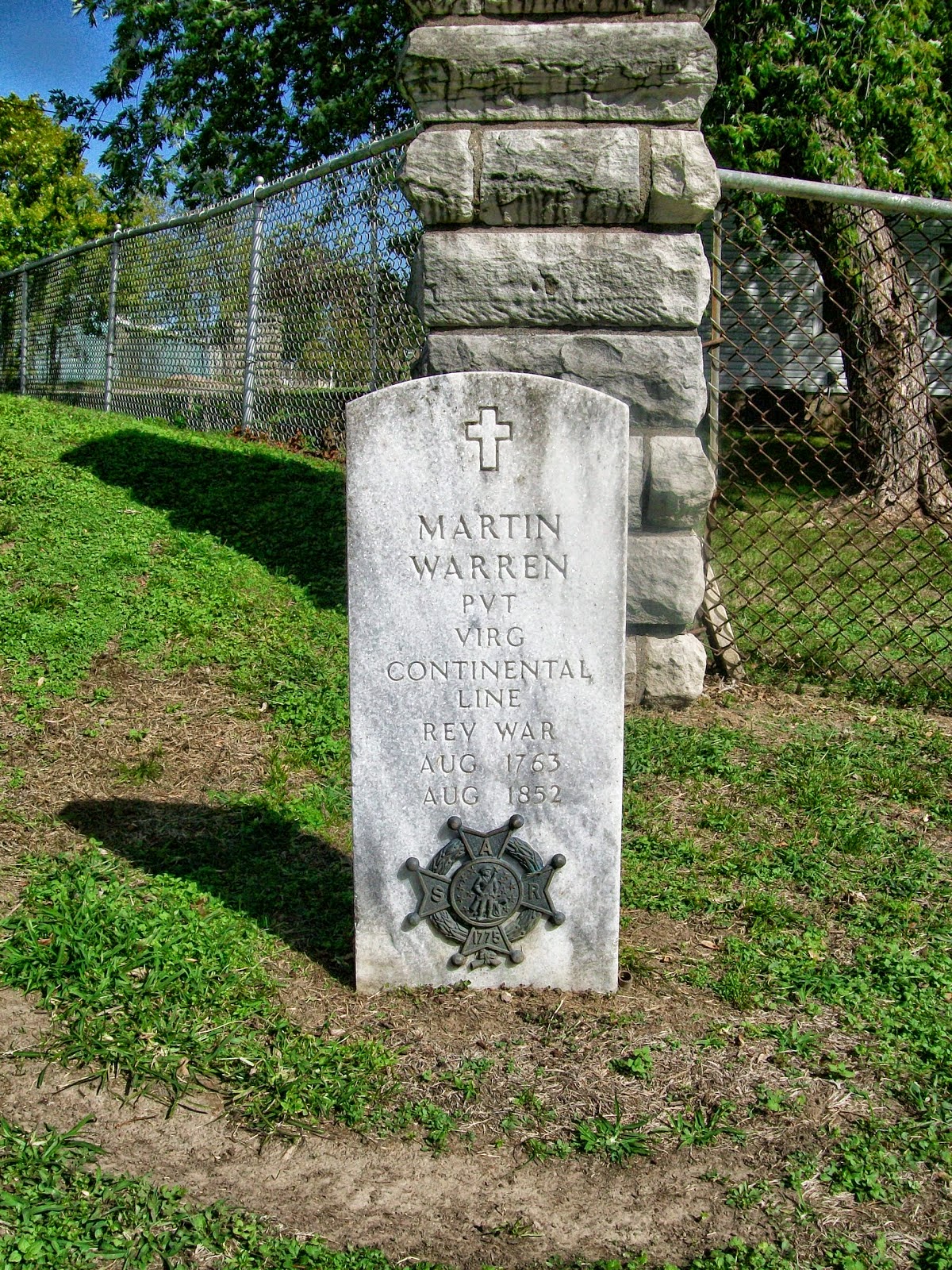 Birth: Aug. 1763
Death: Aug. 1852
Revolutionary war veteran.  is named after him as well as a local school. County commissioners platted this town in 1836, it was originally called Warrens Corner for the early settler Martin Warren.

The commissioners changed the name to Warrensburg in 1836. Born in , in 1763. The son of James Warren, Martin joined the Revolutionary War under the leadership of Captain John Daugherty and General George Rogers Clark at 18 years of age. Martin fought with George Washington in the battle of . From 1781 to the end of the war in 1783, Martin served either in the militia or the regulars in the "Illinois Department" which mainly fought on the western frontier. After the war, Martin married Sarah Dunbar, and together they had eight children (7 boys, 1 girl). James Dunbar 1785-1840, Martin Jr. 1790-1850, John 1795-1879, Anderson 1798-1855, Thomas Chilton 1802-1890, Madison 1805-1840, William A. 1807-?, Mary (Polly) Margaret 1810-1834.
His Revolutionary War service land grant entitled him to 80 acres of land, some of which he would reluctantly sell later to become the city of Warrensburg. Martin Warren was originally buried in the old cemetery off of in Warrensburg  and has a tombstone there also. His body was moved to in 1915. 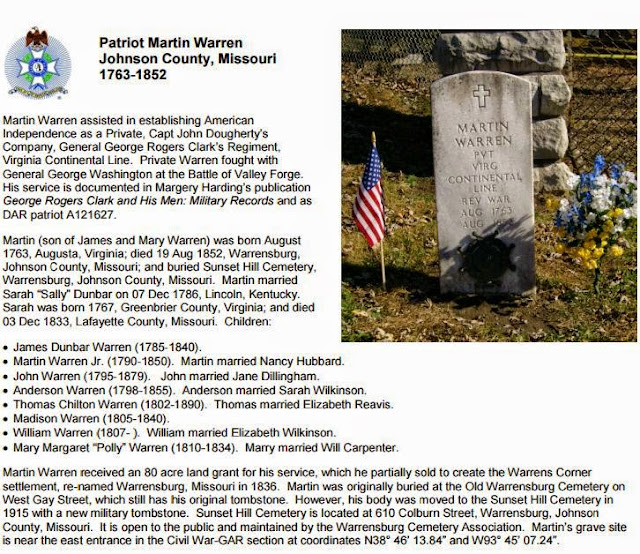 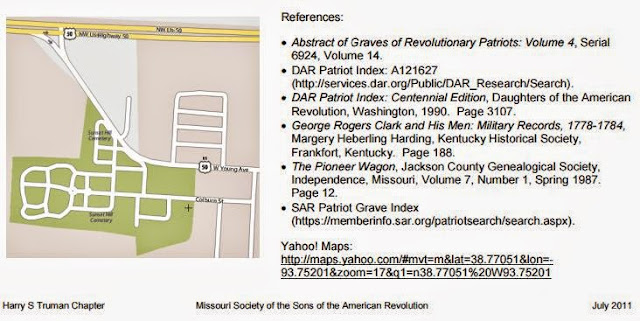 
The town of Warrensburg, Missouri in Johnson County is named for him. He was a veteran of the Revolutionary War.
The son of James Warren, Martin joined the Revolutionary War under the leadership of Captain John Daugherty and General George Rogers Clark at 18 years of age. From 1781 to the end of the war in 1783, Martin served either in the militia or the regulars in the "Illinois Department" which mainly fought on the western frontier. Survival was vicious in the frontier as unpredictable guerrilla warfare often took the place of conventional warfare.
The Warrens moved from either Maryland or Virginia into Kentucky and would later move to Missouri in 1816. Years later, in 1833, Martin Warren would finally settle in Johnson County, three whole years prior to any thought of placing a town in this location. His Revolutionary War service land grant entitled him to 80 acres of land which he took within the confines of present-day Warrensburg. At the time, the acres consisted of nice quality timber and a prairie perfect for Martin's occupation as a farmer. Martin proceeded to build one of the largest log houses in western Missouri with two main connecting rooms on the main level, each about 20 square feet apiece. Each room had large chimneys, one made of stone and the other created out of bricks while the upper level contained a hall, another room, and an attic. A separate 20 square foot building was created to the west of the main house and used as a kitchen as was customary at the time out of fear of fires.
It would appear that Martin Warren may not have been overly excited about the possibility of placing a town in this locale. When Martin was asked if he would be willing to sell some farmland in order to create a town in this vicinity, Warren is reported as saying either one or both of the following:
"I do not believe in starting any more one-horse towns; but, [I] will give you what land you want on top of the hill. I will not ruin my good farmland."
"I wouldn't give up good farmland for another one-horse town."
Either way, Martin Warren eventually gave in and sold the property up on the hill and Warrensburg received its official start on May 9, 1836.
At 70 years old, Martin Warren would marry again, this time to a lady named Ruth Cole. About a decade later, Martin would sell his farm to a prominent citizen named Benjamin Grover who would later have to be sued before all payments were made for the land and log cabin he had acquired. The entire conflict would not be resolved until after Martin Warren's death at his son Thomas's house on the Cliff Baile Farm (located 13 miles southwest of Warrensburg) on August 19, 1852.