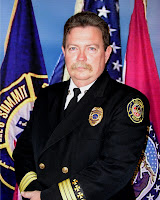 The City of Lee's Summit announced today that Interim Fire Chief Keith Martin has been named the City's Fire Chief, replacing Thomas Solberg, who retired from the Lee's Summit Fire Department in December 2008.

"I am extremely honored to have been selected Fire Chief for the City of Lee's Summit and humbly accept the responsibilities that you have entrusted to me," said Martin.

More than 36 years of experience and a high level of commitment to the job are among the reasons cited for his selection as Fire Chief.

"First, I would like to thank Fire Chief Martin for his exemplary leadership and dedication to the men and women of the Fire Department and the City while he served in the interim capacity during the last four months," said Lee's Summit City Manager Stephen Arbo. "Our fire department personnel are highly regarded by our citizens. Each of them convey a level of professionalism that is unmatched by any other community. Chief Martin represents the very best of this outstanding group of employees.
Agreeing with Arbo, Mayor Karen Messerli said, "I am very pleased with the City Manager's choice of Keith Martin as Fire Chief. I have worked with Chief Martin in the past on many key issues that were important to our community's safety. He is very dedicated to his field of profession and will serve our City well.

Martin, who comes from a family of firefighters, has been employed with the Lee's Summit Fire Department since 1976. His father and brother both have served as firefighters.

During his tenure with the Lee's Summit Fire Department, Martin has moved up the department's ranks steadily. He began as a firefighter in 1976, became an engineer in 1977, a paramedic fire specialist in 1978 and a station captain in 1988. He was promoted to Battalion Chief in Fire Prevention in 1999 and served in this role until he was named an Assistant Fire Chief in Prevention in 2000.

Prior to coming to the Lee's Summit Fire Department, he was employed with the Warrensburg Fire Department as a firefighter/driver.
He attended Bellevue University in Omaha, Neb., and received a diploma from the University of Missouri Fire Rescue Training, and instruction from the National Fire Academy.