﻿﻿﻿﻿﻿﻿﻿﻿﻿﻿﻿﻿Adam Vernaz, a prominent citizen of Warrensburg, Missouri, is of Swiss descent. He was born October 3, 1863 in St. Louis, Missouri, son of Pierre and Callette (Pithoud) Vernaz, natives of Switzerland. Pierre Vernaz was born in December, 1823 and Callette (Pithoud) Vernaz was born in 1828. They were united in marriage in Bulle, Switzerland, and about 1844, when Pierre Vernaz was twenty-one years of age, emigrated from Switzerland to America. They came to America on a sailing boat and were thirty-one days on the way. Mr. Jaccard, of the Jaccard Jewelry Company, of Kansas City, Missouri, came to America from Switzerland on the same boat. To Pierre and Callette Vernaz were born the following children: Eva, Dwight, Oklahoma; Adam, the subject of this review; Mrs. Van Meter, Dwight, Oklahoma; and Mrs. W. W. Scott, Darlington, Oklahoma. Her husband is Indian agent there. J. C. Vernaz, the fourth son of Pierre and Callette Vernaz, died in Warrensburg, Missouri in 1906. 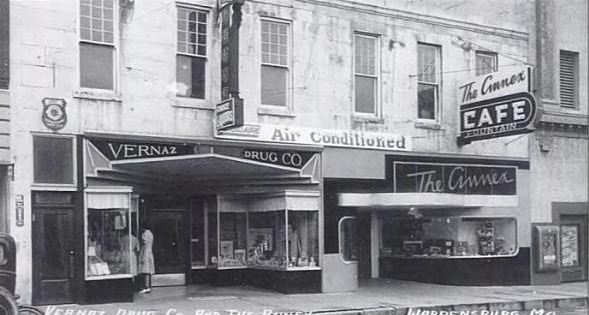 After the Civil War Pierre Vernaz went west with a government train and when near Ft. Laramie, Wyoming, was attacked by the Indians. Mr. Vernaz was shot through the left hand, crippling him for life. He had no way of procuring medical attention until he returned to St. Louis, Missouri, and when he went to the hospital it was too late to cure the wound. Prior to the accident, Pierre Vernaz had been a tailor, but he was obliged to give up his trade because of the crippled hand. His death occurred in December, 1906, at Warrensburg, and in 1907 his wife died.
Adam Vernaz came to Warrensburg with his parents in 1867, when he was four years of age. The Vernaz family located in the old town, Adam receiving his education in the village school. After leaving school he entered the employ of Baldwin & Richards, proprietors of the Warrensburg "Standard." Later he was employed at the "Journal-Democrat" office. In 1904 he went into partnership with his brother, Julius C, who for about eight years had been in the drug business. In 1907 the death of Julius C. Vernaz dissolved the partnership and Adam Vernaz has continued the business alone. He carries a splendid and complete line of drugs and the basement of the building, which is located at 116 West Pine street, is well stocked with oils and dry paints.
January 10, 1887, Adam Vernaz and Fannie O'Brien were united in marriage. Fannie (O'Brien) Vernaz is the daughter of James and Rebecca (Swan) O'Brien, of Sedalia, Missouri. She was born in Canada. Mr. O'Brien died about 1903 in Sedalia, Missouri, and his remains are interred in the cemetery at Sedalia. His widow survives him and resides at Sedalia. To Adam and Fannie Vernaz have been born three daughters, all of whom are engaged in teaching: Juanita, a teacher in the public schools of Warrensburg; Lucille, who is teaching in the Home Economics department in the schools of Bolivia, Missouri; and Mercedes, who specialized in music at the Warrensburg State Normal and is now supervisor of music in the Kirkwood public schools, Kirkwood, Missouri. Mr. and Mrs. Vernaz reside in their home at 109 West Russell avenue, in Warrensburg, where they are held in high esteem and have countless friends."History of Johnson County, Missouri" by Ewing Cockrell, 1918