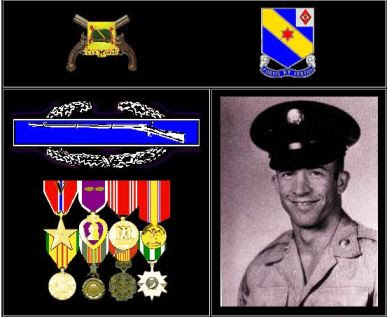 Troy Edward Hirni, II Specialist Four
C CO (RIFLE SECURITY), 52ND INFANTRY, 716TH MP BN
Army of the United States
23 July 1945 - 31 January 1968
Warrensburg, Missouri (from Holden)
Panel 36E Line 015
When he completed Basic Training at Fort Leonard Wood, Missouri, in 1966 he received a trophy for the Outstanding Soldier Award as well as Expert badges in Pistol and Mortar and a Marksman Rifle Badge.
His decorations include the Bronze Star; 3 awards of the Purple Heart (two earned in the Mekong Delta in the summer of 1967 and one for 31 Jan 1968); Good Conduct Medal; National Defense Service Medal; Vietnam Service Medal; Republic of Vietnam Military Merit Medal; Vietnam Gallantry Cross with Palm; and the Republic of Vietnam Campaign Medal. And he received the Combat Infantryman's Badge.
Troy never saw his son, Troy E. Hirni III, who was born while Troy was in Vietnam ... Troy now has three grandchildren. A web site for the 3rd Bn, 39th Infantry contains the following entry on its Honor Roll: "Hirni, Troy E. II - Holden, MO - Long An - Jan 31, 1968 - 36E 015" but that entry is not correct. It appears that SP4 Hirni served with Alpha 3/39 in the Riverine forces, where he earned his first two Purple Hearts, and subsequently was assigned to C Company, 52nd Infantry. That assignment is reflected in the Central Identification Laboratory Hawaii database and in SP4 Hirni's Letter of Condolences file at the LBJ Library. Further, he was not killed in Long An Province but in Gia Dinh Province. C Company, 52nd Infantry was a rifle security company assigned to bolster the capabilities of the 716th MP Battalion, which was responsible for providing security to the US facilities in the Saigon area. The Status of Forces agreement between the US and the South Vietnamese government prohibited stationing US combat forces in Saigon; one result of that situation was that the 716th MP Battalion was equipped only with hand-held light arms. When The Tet Offensive assaults began on the night of 30/31 Jan 1968 the Military Police - and C/52nd Infantry - found themselves faced with not only superior numbers but superior armament as well. Despite being outnumbered and outgunned, the 716th MP Battalion acquitted itself very well indeed - none of the facilities in their charge were captured during the VC assault. The Battalion's performance during Tet was recognized by the Presidential Unit Citation, but the award came at a high price indeed - including SP4 Hirni, 27 members of the Battalion are known to have died during the first day's fighting: