1870 Thomas Little Lynched in Warrensburg, MO and other Missouri Desperados 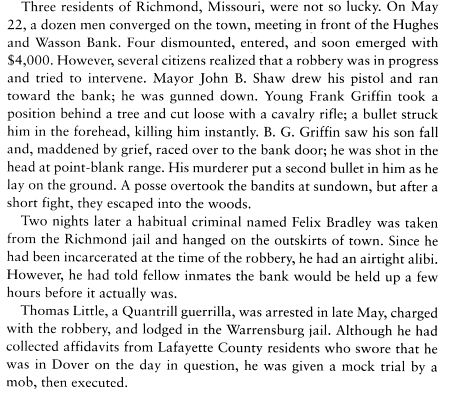 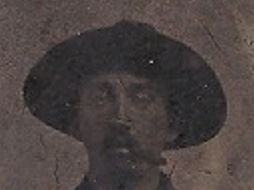 
Hughes and Wesson Bank, $3,500.00 taken, three people killed, 11-20 robbers involved. Thomas Little was lynched by a mob in Warrensburg, Missouri the same day of the robbery. Although Jesse James, wrote in a letter below, that Thomas was lynched a few days after the robbery, and after proving his innocence.


Link to the the Jesse James Letter Transcript 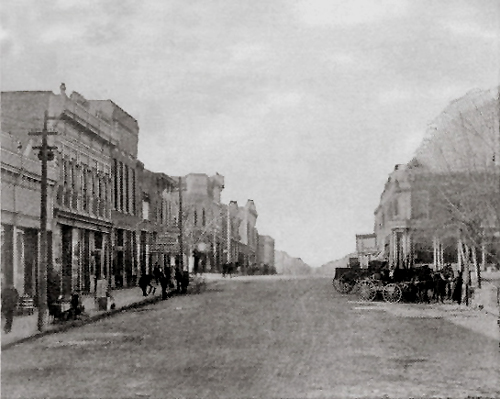 
Tom Little of Johnson County, Missouri, came from a Southern-sympathizing family. During the Civil War, he himself rode at least briefly with notorious Confederate guerrilla leader William Quantrill, and in 1864, two of his sisters were arrested and imprisoned at St. Louis for aiding guerrillas. (See my Bushwhacker Belles book.)


After the war, Little fell in with the James-Younger outlaw gang. On May 23, 1867, the gang robbed the Hughes and Wasson bank in Richmond, Missouri, of about $3,500 and killed three local citizens, including the mayor, when some of the townspeople tried to mount a defense. 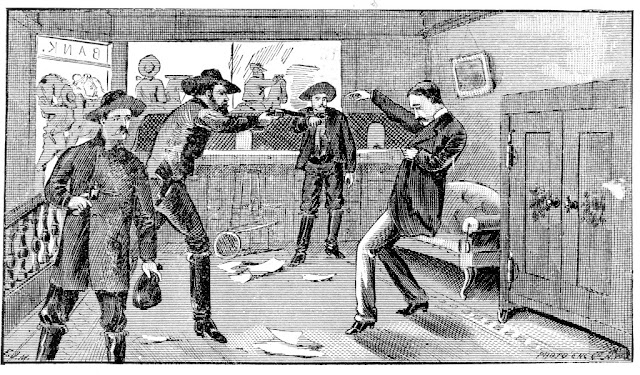 Little was thought to have been along the robbers, and he and another suspect, Fred Meyers, were arrested in St. Louis in late May, brought to Warrensburg, and lodged in the county jail there on June 1. Friends of Little appeared and claimed they could obtain affidavits from the best citizens of Dover in neighboring Lafayette County that Little was in that community at the time of the Richmond robbery and was, therefore, innocent. They went to Dover, obtained the necessary affidavits, and upon returning to Warrensburg on the night of June 4th, were promised a hearing in Little's case the next day. However, the feeling around Warrensburg, a stronghold of Radical Republican sentiment, was strongly against Little because of his war activities. A "vigilance committee" headed by Warren Shedd, a former Union general, had been maintaining its own brand of law and order in the area for some time. Not waiting to hear the testimony that might exonerate Little, a mob broke into the jail at about five o'clock on the morning of the 5th, dragged Little from his cell, and hanged him in downtown Warrensburg. 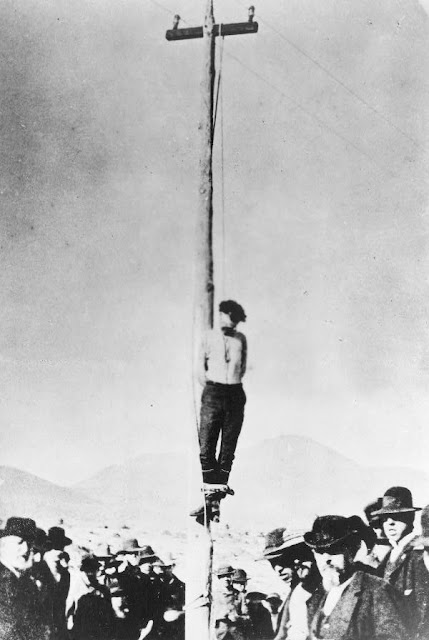 John Heath's corpse hanging from a telegraph pole in Arizona after being lynched on February 22, 1884.


Hughes-Wasson story murkier by the day


Every day when the Ray County Museum is open, we have a member of the Ray County Genealogical Association volunteering in our library. We have a different person for each day of the week, and Carol Profitt is here on Saturdays. Some days we are really busy and on others days it’s slow enough that we get to read old newspapers.


Last Saturday I was in my office working and Carol was reading a 1936 newspaper when she asked me to come to the library for a minute. It’s always fun to see what story she has found, so I headed to the other room. As always, she found just the story I needed.
It was in The Richmond Missourian, Jan. 23, 1936, on page 6 and the story was by Jewell Mayes and headlined “Original Telegram on Local Bank Robbery”. Mayes wrote, “In examining the files of the St. Louis newspapers of the year 1867, searching for data on the impeachment of Judge Walter King, I found in the edition of May 24,1867, a telegram sent from Lexington to the ‘Missouri Republican’ as follows:
“LEXINGTON, MO., May 23, 1867 – The Hughes & Wasson Exchange and Banking House at Richmond was robbed at about 2 p.m. today by 14 armed men. An attempt was made to release the horse thieves confined in the jail, but this failed. Mr. Shaw, the mayor, and the jailer and his son, were killed in the melee. The robbers escaped unhurt. Citizens are active in pursuit.
“The Missourian has published the chronicles of that tragic day in Richmond, from different sources, all interesting to Richmond-Rayites.
“Jim Cummings once, at the Richmond Hotel, promised me that he would tell me the names of all 14 of the men in the Hughes Bank robbery, after ‘two blankety-blank fellows died.’
“Jim told me many of the details but died without relating the complete story. He was not here in the gang of bank bandits at Richmond.
“Successor to the Hughes & Wasson Exchange and Banking House of 1867 is the present Banking House of J.S. Hughes & Co., with the following officers and Board:
“Fred R. Duncan, president; C.C. Cline, vice-president; R.B. Hughes, cashier; H. S. Hughes, assistant cashier. Ami Hughes is chairman of the Board. Other members are Fred D. Duncan, M.H. Brewen, C.C. Cline and R.B. Hughes.”
I had never heard this story before so I wanted to find out more about it. I decided to look up the Richmond Missourian newspaper about Jim Cumming’s death. This was Jewell Mayes’s newspaper so I was sure he would give us a few more details about ol’ Jim Cummings.
In The Richmond Missourian July 18, 1929, it says, “Jim Cummings Dead. Quantrill Man From Clay County Passes at Higginsville. Jim Cummings died at the State Confederate Home at Higginsville, Mo., July 9 at the age of 82 years, having lived at the home most of the time for 27 years. Cummings was a picturesque character, known to ever so many Rayites locally. He visited Richmond many times and told Jewell Mayes ‘a lot of things’ pledged to secrecy until his death, but upon being asked concerning same, Mr. Mayes replies that he was never able to sift out fact from romance. Mr. Mayes often talked with him for hours.
“Cummings told Mayes the inside story of the Richmond bank Robbery, but insisted that he was not here in that bloody tragedy, because ‘my horse’s shoes came loose, causing me to stop at the blacksmith shop in Claysville to have the animal shod.’ He said the fellows who paid the death penalty were part of the guilty.
“Old Jim bitterly hated the James boys, especially Jesse James. He told many stories of the local doings of the Ford and James crowd, not agreeing in several points with accredited history. He told florid tales of the cruelty and heartlessness of Jesse James.
“Cummings jointly wrote a book, and got worsted in his publications. He told Mayes that he was leaving a manuscript of his life, to be published after his death. This old ex-Confederate had a rambling style that lacked frankness of fact, not going to the point of a statement. Full of hate and filled with bias, his memoirs can hardy be hoped to be of permanent value. Mr. Mayes has a copy of his first book.
“Jim insisted that he never helped to rob a train. He told intimately of the Gallatin train robbery, but vowed he was in Texas at the time. He was always promising to revel many wonderful things, ‘when one or two more fellows dropped off.’”
After reading these two articles, I’ve decided that we may never know the truth about what really happen on May 23, 1867, in Richmond, Missouri.
Robbery Story Link