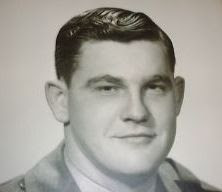 March 29, 1930 - January 23, 1997 Joseph L. Hanrahan was the son of Cyril and Dorothy Hanrahan. He was born on March 29, 1930 in Litchfield, Illinios. On February 7, 1953 he married Alice A. McFerm. He was a veteran of the Korean War. He was the supervisor of Town and Country Shoe Factory in Warrensburg where his father also worked. He then worked for 15 years at Central Missouri State University from 1975 to 1991. He was also a member of the American Legion and the First United Methodist Church. Joseph L. Hanrahan and his wife Alice had two children, Hal Hanrahan and Cheryl Horine. He also had five grandchildren. He passed away on January 23, 1997 at the age of 66. American Hero.

Corporal Hanrahan Wounded, 1952
Standard Herald Warrensburg, MO
October 10, 1952
Corporal Joseph L. Hanrahan, son of Mr. and Mrs. Cyril Hanrahan of Warrensburg, was wounded when his tank was one of five sent on a mission in Korea September 22 to rescue three American tanks which had been surrounded by 1200 North Koreans for 15-hours on a fog-shrouded peak on the eastern front in Korea, according to a story which appeared in Sunday’s Kansas City Star. He and three other men had dismounted under fire and made sure one of the burning tanks was empty. Hanrahan was knocked down by a burp gun while his three companions raced to safety. they thought he was dead but he was later found defending himself with his .45-caliber pistol. Word was received last week by Mr. and Mrs. Hanrahan of the wounding of their son, who is now a patient in the army hospital at Osaka, Japan. they have been notified that he should make a speedy recovery unless complications set in. The Kansas City Star story, written by Stan Carter, a correspondent on the eastern front in Korea, was entitled “Heroic GI Stand,” and told how only two Yanks were killed in a fantastic 15-hour battle in Korea. It was described as the most fantastic episode of the Korean War. A Peiping radio account Saturday indicated that it was two miles east of Chansong.
The story stated that the three tanks were surrounded by Communists who climbed over the tanks, firing burp guns into the muzzles of the tanks’ 76-millimeter guns. Grenades and shaped charges were set off against the tanks’ armor. The surviving men in the tanks said that the South Koreans they were supporting were taken by surprise. Those not killed by the charging Reds withdrew down the hill. The three tanks could not turn on the narrow roads. They began a one-sided fight. Two tanks were on a ridge line. The other was a quarter of a mile away. Within 15 minutes the two tanks were surrounded. It was so dark they could not see. The two tanks on the crest fired their 30 calibers at each other, trying to knock the North Koreans off...When a Communist flare went off, they could see bodies piled between the two tanks. Hanrahan’s tank was one of five that made the counter attack. Two of the rescue tanks were disabled by mines but the other three, including Hanrahan’s pressed on.”We could see North Koreans run all over the hill,” Lieut. Barney Kengla of Tucson, Ariz., who was sent up the mountain with five tanks. Lines of men were carrying ammunition boxes but the Americans blew them right “out of there.” Afterwards 179 bodies of Reds were counted on the spot. Dozens of others littered the hill, and the Reds had carried away many more. the rescuers got as far as Captain Koch’s burning tank, one of the three which had been surrounded.
This was when Hanrahan was wounded. Later Lieut. Kengla and Pvt. Dean A Lynn of Mason
City, Ill., dismounted from their tank after expending its ammunition and got into Hanrahan’s empty tank and tried to get it of the road. The Reds had booby-trapped the tank with grenades. By this time South Korean infantry were moving back up the hill and a South Korean disarmed the grenades. Hanrahan’s tank was used to support the assault. When they had used its ammunition, Lynn, who had never driven a tank before, drove it off down the road. Kengla and his men than pushed logs under Koch’s burned-out tank and rolled it off the path. By 4 p.m. September 22, the mountain crest was back in the Allied hands.
Cpl. Joe Hanrahan Awarded Bronze Star for Bravery and courage under enemy fire in Korea, Cpl. Joe Hanrahan, 204 West North Street, has been awarded the Bronze Star. A son of Mr. and Mrs. Cyril;l Hanrahan, Cpl. Hanrahan arrived last week to spend a 30-day furlough after his service in Korea, during which he was seriously wounded. He will report to Camp Crowder February 12, and may be discharged soon. However, addition medical treatment is required for injuries received in the encounter September 22, for which he received the decoration. Hanrahan, and members of his tank crew, were ordered to rescue wounded and dead from a hill and were subjected to heavy enemy fire. Although the tank received two direct hits, it continued on its mission until reaching a tank that had been knocked out. Cpl. Hanrahan dismounted and went to the tank that was burning, checked for wounded tank members. He was fired upon by enemy burp guns and heavy mortar fire, and immediately ordered his men back to their tank. He then went to warn another tank not to come and was put down by fire as he reached it. He remained there, defending himself until rescued by his crew members. "Cpl. Hanrahan," one of his men said in a sworn statement describing the action, "through his self-denial and disregard for his own personal safety, inspired his crew to rescue the dead and wounded. His quick thinking and alertness saved the lives of his tank crew of the oncoming tank."