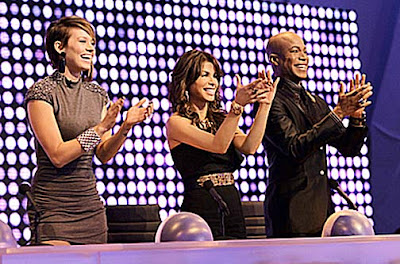 
Former resident serving as judge for national CBS-TV dance show
Teresa Shane
Staff Writer
Warrensburg - From Warrensburg to the United Kingdom, Kimberly Wyatt is back in the United States to help judge a dance show with her idol. Wyatt, 28, will appear on "Live to Dance" with former American Idol judge Paula Abdul and choreographer Travis Payne. The CBS show airs at 7 p.m. Wednesdays. The show is based on the U.K.'s "Got to Dance," which Wyatt judged for two seasons.  "I helped start the show in the U.K. and then CBS picked it up in the U.S.," Wyatt said. "I auditioned with Paula and ended up winning the slot to help judge the U.S. show. I have been a fan of Paula's for so long and this is a dream come true."  Wyatt is the daughter of Jeff and Kathy Wyatt of Warrensburg and a 2000 Warrensburg High School graduate.  Kathy said the only fan letter Kimberly ever wrote went to Abdul.  "I remember mailing it for her," she said.  Wyatt's schedule includes a lot of air time - in an airplane - as she flies from the U.K. to the U.S.  "I go back to Los Angeles on Monday, Jan. 10, we do the live semi-final on Wednesday, Jan. 12," she said.  In the meantime, her band, Her Majesty and the Wolves, is releasing its first album, 111.  "It just seems like this is what I've been waiting for," she said. "I just felt like I was artistically ready."  Wyatt is a former member of the Pussycat Dolls, performing with the all-girl group from 2003 to 2010.  "I am extremely busy," she said. "I've gotten used to traveling but have never done two shows in two countries. "It is so exciting. There are contestants from ages 4 and 5 up to 90. They are doing hip-hop, tap dance, jazz - all styles of dance."
Semi-finalists in Los Angeles put together a weekly, live performance.  "It is along the same vein as the other shows where television viewers vote for who stays but we are seeking a different niche of the television public," she said. "It is a family show. Adults and children can watch it. The winner receives a grand prize of $500,000."  Wyatt said scheduling keeps her from returning to Warrensburg as often as she would like.  At 7, she started dancing lessons with Stephanie Matthews and Jo Noth at White Oak Dance Academy. Matthews, who now volunteers as Crest Ridge School District's dance team coach, said Wyatt is special.

"There are just some children you know - as a dance teacher - that you can mold and guide in the right direction," she said. "I was so lucky to get her to teach."
She said Wyatt used critiques to improve.  "She had that drive and she did struggle with some areas," Matthews said. "No dancer is perfect with all types of dance."  Matthews said Wyatt kept her eye on the brass ring.  "I am not surprised at her success," she said. "I'm just so proud of her."  Kathy said Kimberly followed the "dream and believe" motto.
"We are so proud of her, we are just busting at the seams," Kathy said. "She has done all of this on her own, which makes us doubly proud."