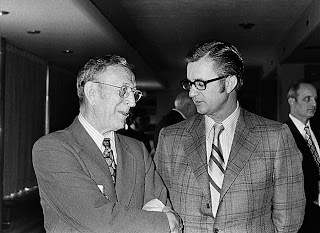 Gene Bartow (1930-2012 ) was the first men's basketball head coach and the first athletic director at the University of Alabama at Birmingham(UAB). During his 18 seasons as head coach, his teams won 365 games and made nine appearances in the National Collegiate Athletic Association (NCAA) Division I national championship tournament. As athletic director, he helped build the school's sports department from the ground up and was instrumental in developing UAB's football program in the 1990s.
Bartow was born on August 18, 1930, in Browning, Missouri, one of four children to Thomas Bartow and Almeda Gooch Bartow. Bartow graduated from Browning High School in 1948 and then enrolled in Truman State (Northeast Missouri State University). While still in college at age 21, Bartow coached the Greentop Missouri High School team to a 16-6 record during the 1951-52 season. He graduated from Northeast Missouri State University in 1952, spent the next two years serving in the U.S. Army, and then went on to complete a master's degree from Washington University in St. Louis.
Bartow continued to coach throughout the 1950s, and his six Missouri high school teams had a combined record of 145-39. His college coaching career began in 1961 at Central Missouri State University in Warrensburg, Missouri, where he compiled a 47-21 record in three seasons. Bartow then spent six seasons (1964-70) as the head coach at Valparaiso University in Indiana. His record at Valparaiso was 93-69, highlighted by a 21-8 record in the 1966-67 season. He led Valparaiso to the NCAA Division II national championship tournament three times in six seasons.
In 1970, Bartow took over as head coach at Memphis State University (now the University of Memphis) in Tennessee. After going 6-20 the season before Bartow's arrival, the Memphis State Tigers improved to 18-8 during his first season. The Tigers were 21-7 the following season and then went 24-6 in 1972-73, advancing to the national championship game, where they lost to the University of California at Los Angeles (UCLA). Bartow was named the national Coach of the Year for that season.
Bartow spent one more season at Memphis State, then coached the U.S. National Team in the 1974 International Basketball Federation World Championship, and spent one year at the University of Illinois. In 1975, Bartow became the head coach at UCLA, succeeding John Wooden. He had two of the best seasons of his coaching career there, going 28-4 and 24-5 and advancing to the semifinals of the NCAA championship tournament in 1976.
Although UCLA was considered one of the premier programs in college basketball, Bartow left in 1977 to go to UAB, which at that time did not have a basketball program or an athletic department. He took over in the dual roles of men's basketball coach and athletic director in the summer of 1977. The school's athletic teams began NCAA-sanctioned competition for the first time in the fall of 1978 in the Sun Belt Conference.
Although Bartow officially was overseeing the entire athletic department, his primary focus was creating a men's basketball team. The UAB Blazers went 15-11 in their inaugural campaign of 1978-79 and improved to 18-12 in 1979-80. The team then embarked on a very successful seven-year run. In 1980-81, UAB went 23-9 and made it to the NCAA national championship tournament for the first time. The Blazers advanced to the final 16 of the tournament by upsetting perennial contender University of Kentucky before losing to Indiana University. A year later, UAB went 25-6, upset highly ranked University of Indiana and University of Virginia, and advanced to the final eight of the NCAA tournament, but lost to the University of Louisville. UAB made five more consecutive trips to the NCAA tournament, but those teams never advanced beyond the second round. Bartow was unable to duplicate his early success at UAB. The Blazers made it to the NCAA tournament only twice in his final nine years as the head coach, although they had just one losing season during that stretch (14-16 in 1994-95).
Bartow retired as head coach after the 1995-96 season, succeeded by his son Murry; he remained as athletic director until 2000. Bartow finished with 647 victories in his 34-year college coaching career. At the time of his retirement, he was one of only 18 coaches in NCAA Division I with more than 600 career victories. In 1997, UAB's basketball venue was renamed Bartow Arena. The gym at St. Charles Missouri High School also has been renamed in his honor.
While at UAB, Bartow was an early advocate for creating a Division I football team at the school. The Blazers began playing club football in 1989, and by 1996 the team was competing in Division I-A. In the early 1990s, he lobbied to have UAB included as a member of the new Great Midwest Conference and later Conference USA, which included universities located in Chicago, Cincinnati, Dallas, Houston, and St. Louis. After leaving UAB in 2000, Bartow became general manager of the Memphis Hound Dawgs of the American Basketball Association. Since 2001, he has served in various executive positions for the Memphis Grizzlies of the National Basketball Association.
Bartow was inducted to the Alabama Sports Hall of Fame in 1989. He also has been inducted into four other halls of fame, including the Missouri Basketball Hall of Fame. Even while he was working in Memphis, Bartow always maintained his home in Birmingham with his wife, Ruth, whom he married in 1952, and with whom he has three children.
Cary Estes
Birmingham, Alabama

Even during the toughest fight of his life, his battle with stomach cancer, Coach Gene Bartow is spending most of the week at Birmingham-Southern College with the NBA's Memphis Grizzlies.