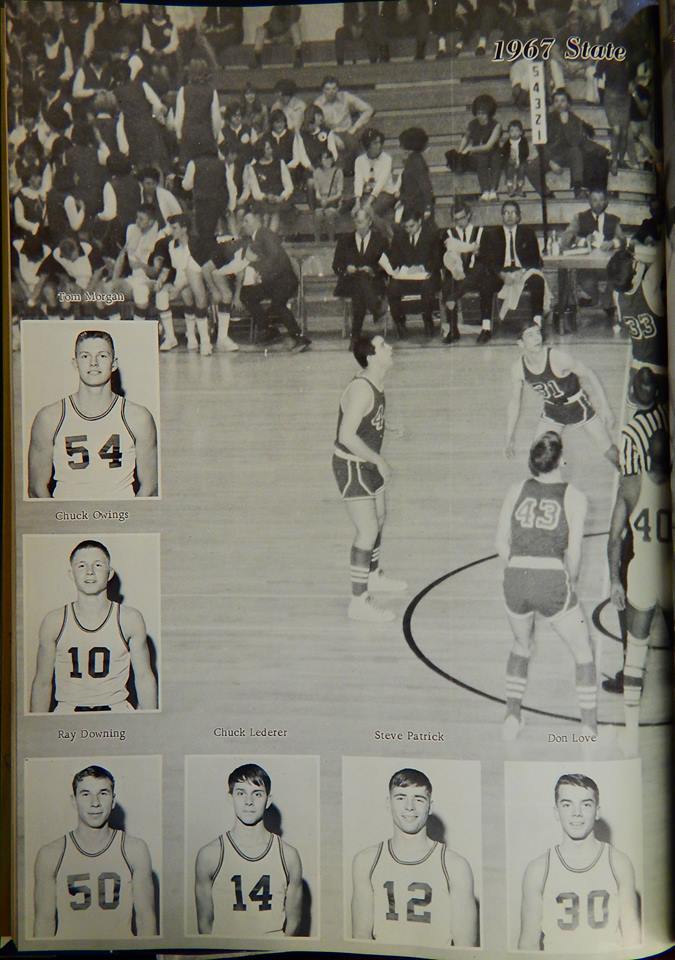 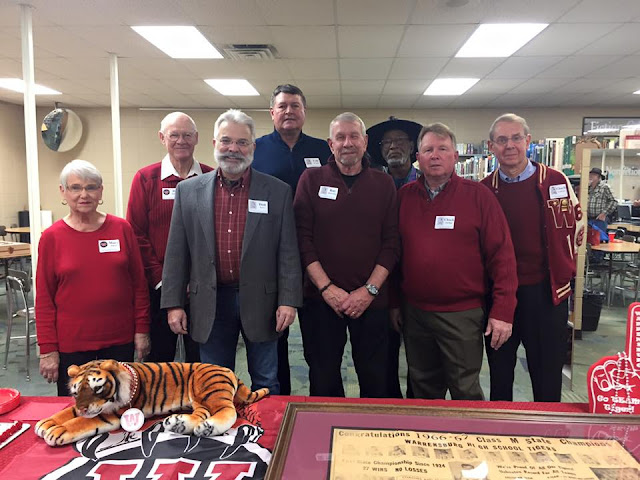 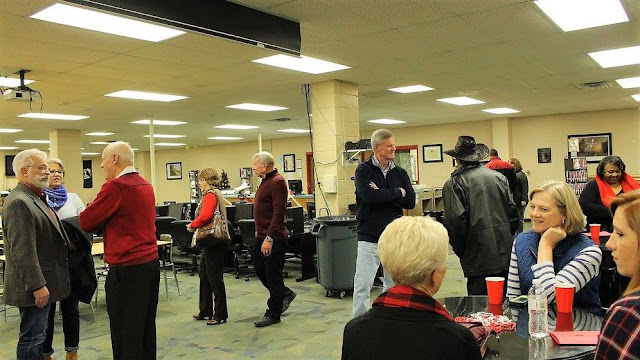 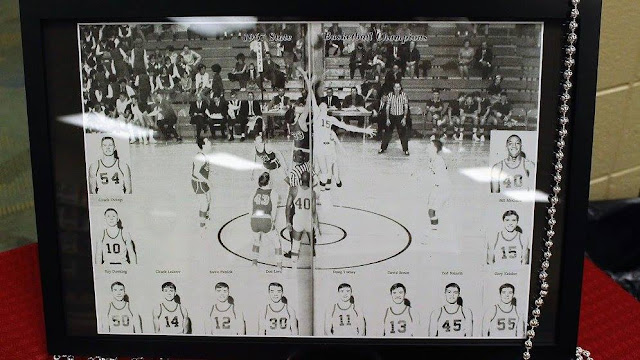 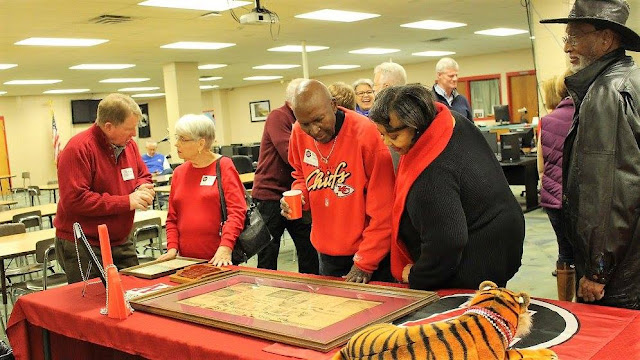 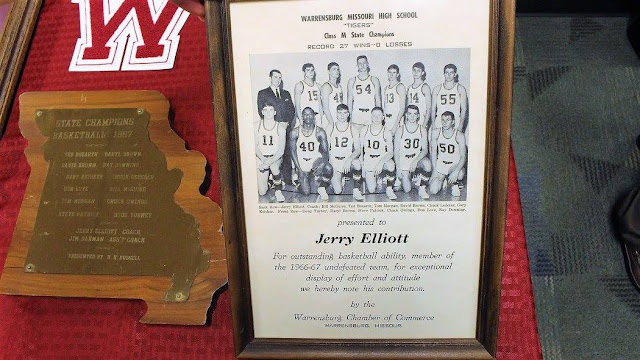 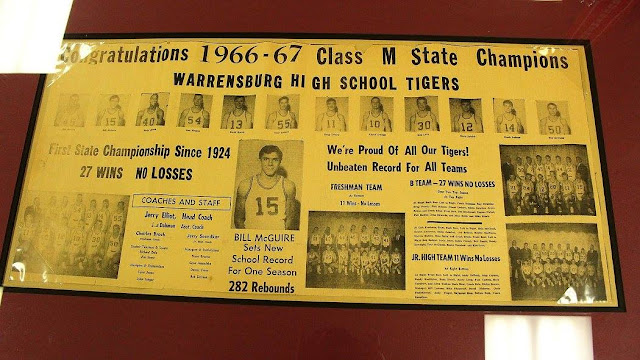 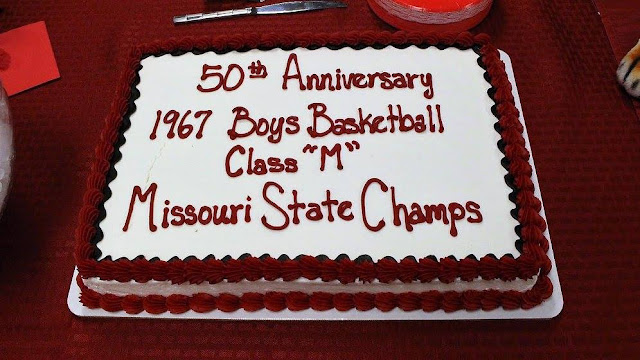 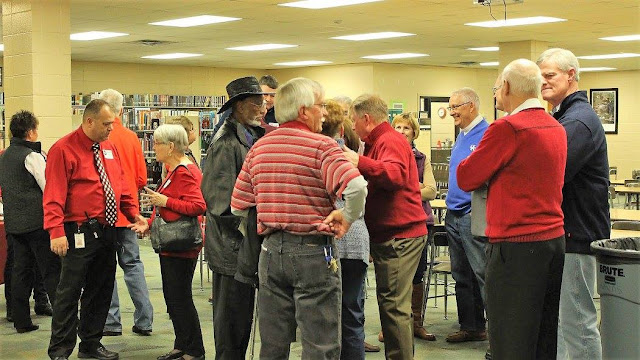 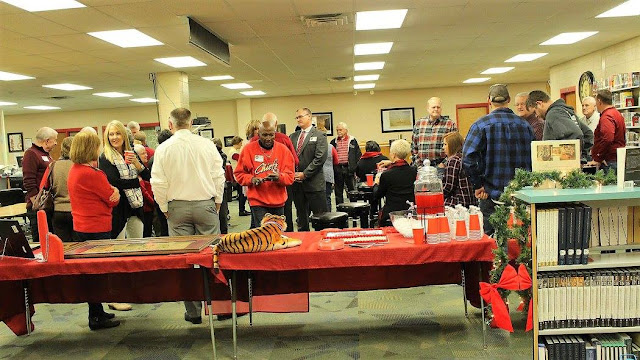 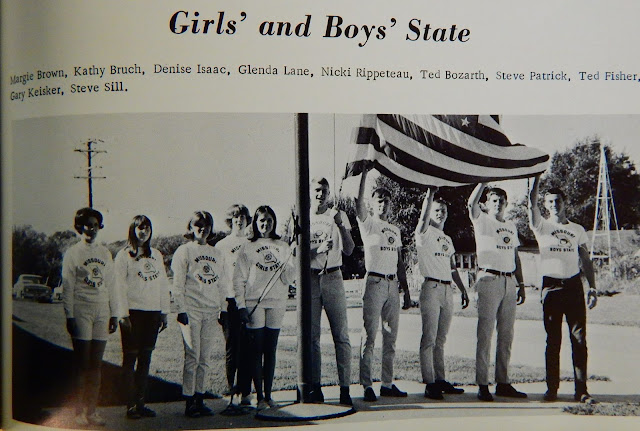 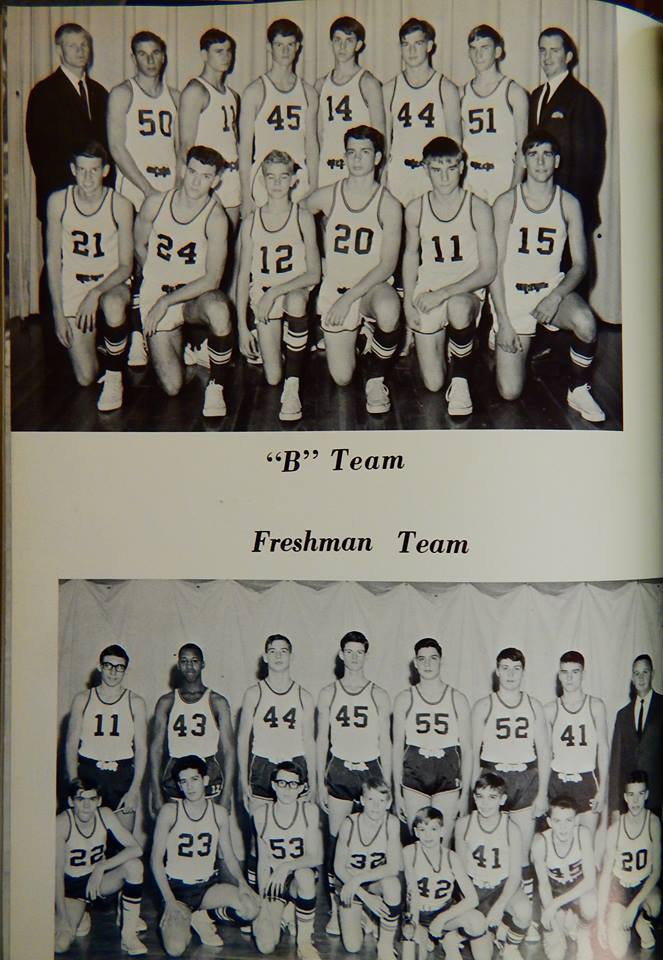 
(Coach) Jerry D. Elliott, 76, of Warrensburg, died Wednesday, Sept. 14, at his home.
Memorial services will be held at 2 p.m. on Sunday, Sept. 18, at Sweeney-Phillips & Holdren Funeral Home. The family will receive friends Saturday, Sept. 17, from 6:30-8 p.m. at the funeral home. Honorary pallbearers will be Ben Edmondson, Jim Dahlman, Brian Dake, Dr. J.B. Astik, David DeFrain, Bob Lotspeich, Lynn Solomon, Bob Bartlett, Mike Jinks, and Paul Rizzo.
Memorial contributions are suggested to Crossroads Hospice or Johnson County Cancer Foundation and can be left in care of the funeral home.
He was born September 17, 1939 in Kansas City, Missouri, the son of Gareld D. and Clara L. (Jones) Elliott.
On December 17, 1960, he and Mary Sheilia Wilson were married in the Central Missouri State College Chapel (now University of Central Missouri), in Warrensburg.
Jerry graduated from Latour High School in 1957. He received his Bachelors of Science, Masters, and Specialist degrees from Central Missouri State University, and his Doctorate from University of Missouri.
Jerry taught at Raytown, Knob Noster, and Warrensburg Junior High as a physical education teacher. He later worked at the Warrensburg High School as a PE and Health Education Teacher, Driver’s Education Instructor, Head Basketball Coach, Tennis Coach, and Assistant Football Coach. In 1967, his basketball team won the Missouri Class M State Championship.
Later Jerry went to work as the Business Manager for Revenue at CMSU, retiring in 2002. He worked as Elementary Assistant Principal for the Sherwood School District in Creighton, Missouri, for one year.
He was a member of the First Presbyterian Church and sang in their choir. He was a Past President and member of the Warrensburg Rotary Club, Phi Delta Kappa fraternity, and the Teacher’s Pet Barbershop Harmony group. He was the chairman of the Johnson County United Way for several years. He coached little league baseball for the Bobcats and the Elk’s Warriors and was the head coach for the Warrensburg American Legion Baseball Team.
Jerry is survived by his wife, Mary Sheilia Elliott, of Warrensburg; a son, Michael D. Elliott, of Blue Springs, Missouri; three grandchildren, Stephen M. Elliott and wife, Sarah, of Norwalk, Connecticut, Katherine J. Beachy, of Warrensburg, and Elizabeth M. Elliott, of Blue Springs; a sister, JoAnn Landers and husband, Bill, of Canyon Lake, Texas; brother, Jimmy Elliott and Carrie, of Warrensburg; and several cousins, nieces, and nephews.
He was preceded in death by his parents.

Here is the 1967 Missouri State Championship Class "M"  team from Warrensburg High School that was coached by then 27 year old Jerry Elliot Head Coach and  LeRoy) Hunt.  The team went a perfect 27-0 and beat Buffalo in the championship game held at Lexington, winning 64-51, Ted Bozarth led the way with 22 points.   Thanks to Chuck Owings for the team information! 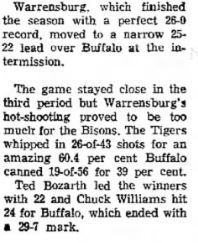 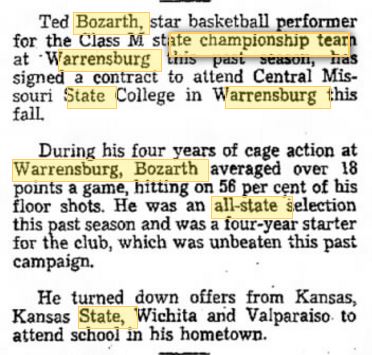 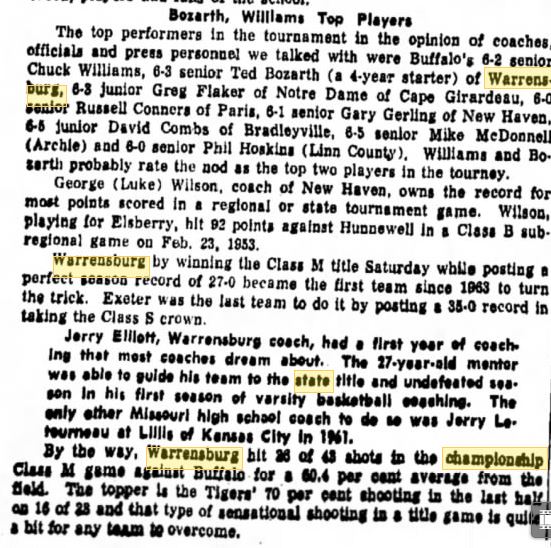 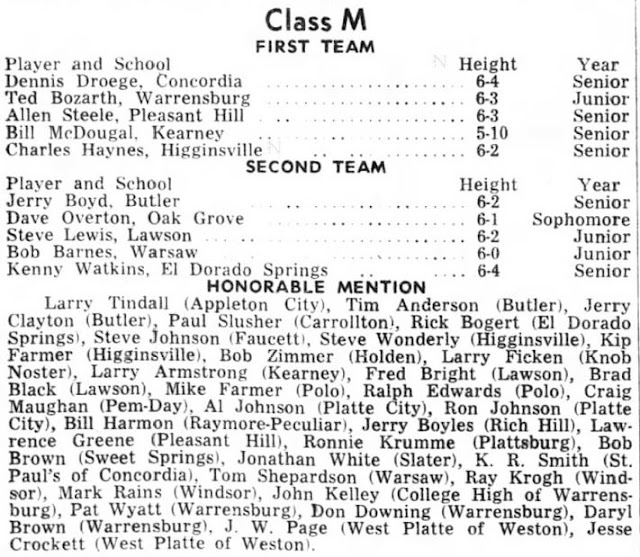 Lee Hunt had a stellar coaching career at UCM-CMSU, Memphis State, Illinois, UCLA (where Hunt got a taste of the NCAA Final Four more than once), Alabama-Birmingham, and Mississippi before taking the coaching position at UMKC going to Division 1.  At many of the schools he served under Gene Bartow, former Warrensburg Resident and UCM coach.

If you have any pictures, box scores or other information or recollections you have please send to us and we will post them.  Can you believe it has been 50 years. 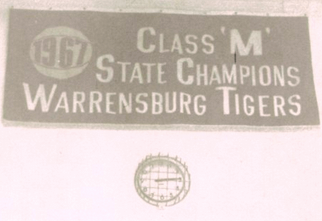 
You get very spoiled traveling with Coach Wooden. There's the town car that picks him up at his condo in Encino and drives him to the Raytheon private terminal in Van Nuys. There, the private jet is waiting, and in less than three hours, you arrive in Kansas City, where a limousine is waiting to take us to the Kansas City Hyatt Regency.


Coach Wooden and his daughter are in adjoining rooms on the 15th floor, where I head to escort them to the private reception on the 40th floor of the hotel. Upon entering Coach Wooden's room, there sits Lee Hunt, with his wife, Elizabeth. Hunt was a Bruin assistant under Gene Bartow, the first UCLA head coach after Coach Wooden's retirement in 1975. Hunt ended his career as the head basketball coach and athletic director at Missouri-Kansas City.


When the Hunts depart, Impelman and I escort the Wooden's to the 40th floor. Walking into the reception, there sit Smith, Russell and Robertson, joined by Coach Wooden. As people gather around the four Hall of Famers, everyone is frantically taking pictures.


In 1986, UMKC began its journey to Division I status and at the forefront was Robert Lee Hunt, former Director of Athletics and men’s head basketball coach. While UMKC is where he retired, it was definitely not where his journey in basketball began.
“When I was just very small I used to shoot baskets in the house against the walls; my mother let me do it. I kind of look back on it and wonder why she did,” Hunt recalled.
Once Hunt got a basketball goal in the backyard of the house, he moved his free throws outside, but it wasn’t long until his was back inside again, this time on the court.
Hunt played basketball for and graduated from Central Missouri State, and immediately landed his first coaching job at Wellington High School.
“I always knew I wanted to be a coach,” Hunt said. “My freshman year of high school I had to take a citizenship class, and I wrote in my career notebook that I wanted to be a basketball coach.”
Hunt bounced around throughout his coaching career coaching for universities such as CMSU, Memphis State, Illinois, UCLA (where Hunt got a taste of the NCAA Final Four more than once), Alabama-Birmingham, and Mississippi before taking the coaching position in Kansas City.  At many of the schools he served under Gene Bartow.
At Ole Miss, Hunt took the position of men’s head basketball coach and Assistant Athletics Director in 1982. After being picked to finish eighth in the pre-season polls, Hunt led the Rebels to a 19-12 overall record and a second place SEC finish.  As a result, Hunt was selected as the SEC Coach of the Year in 1983 and was awarded the Rupp Cup, which was a namesake of legendary Kentucky coach Adolph Rupp.
During the summer of ‘86, Hunt came to UMKC as a consultant, but it wasn’t long until there was more in store for him when it came to the ‘Roos.
“They called me and asked me if I could be a candidate for basketball coach and Athletics Director, and they made an attractive offer,” Hunt said. “So I came here in the fall of 1986.”
Hunt led the Kangaroos in their first Division I game on Nov. 30, 1987, against Rice in front of 4,256 fans at Municipal Auditorium.   The program's first win came in the third game of the season in a victory over Prairie View A&M, and the squad finished the inaugural Division I season with a 9-18 overall record.
In 1989, Hunt welcomed the first of a pair of recruits from Memphis who would go on to become two of the best players in UMKC history.  Ronnie Schmitz joined the Kangaroos prior to the 1989-90 season before Tony Dumas joined the squad in 1990-91. Schmitz ended his career with 1,939 career points, while Dumas scored 2,459 points in three seasons in Blue and Gold.  Dumas left UMKC after being a first round draft pick by the Dallas Mavericks in the 1994 NBA Draft.
Hunt is the coach behind the best season in UMKC history.  With Schmitz and Dumas as his starting backcourt, Hunt guided the Kangaroos to a 21-7 overall record, which to this day is the only 20-win season in school history.
Following seven years as an Independent, Hunt oversaw UMKC as it joined the Mid-Continent Conference in 1994.  Following the 1995-96 season, Hunt stepped down from his role as the head basketball coach.  He then remained at the University until 1998, when he retired from his post as the Director of Athletics.
Since coming to Kansas City in 1986, Hunt has been a key figure in shaping UMKC Athletics.  Even following his retirement, Hunt has been a regular on the UMKC Athletics scene, and by honoring the past, UMKC is recognizing a Kangaroo icon with a spot in the inaugural UMKC Athletics Hall of Fame.
(This is the final piece of a nine-part series featuring the inaugural UMKC Athletics Hall of Fame class.)
Lee Hunt, First Hire at UCLA by Bartow, Taking Over for John Wooden
From Sports Illustrated
November 17, 1975
So for the past six months Bartow has been saying things like "I don't intend to try to compete with John Wooden; his record is a miracle," and "We're in a new era now; the Wooden book is closed." Something he has not been saying is, "O.K., you guys, lissen up: things is gonna be different around here from now on, see?"
Of course, things will be different, but not much. Bartow's second move (his first was to put Lee Hunt, who has been his assistant for the past five years and a friend for 15, on the UCLA staff) was to hire Larry Farmer as jayvee coach. Farmer had played forward on UCLA's undefeated teams of 1971-72 and 1972-73, and he had been an assistant coach on Wooden's staff the following year. "If you take over a program that's bad, you may not want to know anything about it," says Bartow. "But if you take over a program that's just won 10 national championships, it helps to know a little bit about what's been going on." 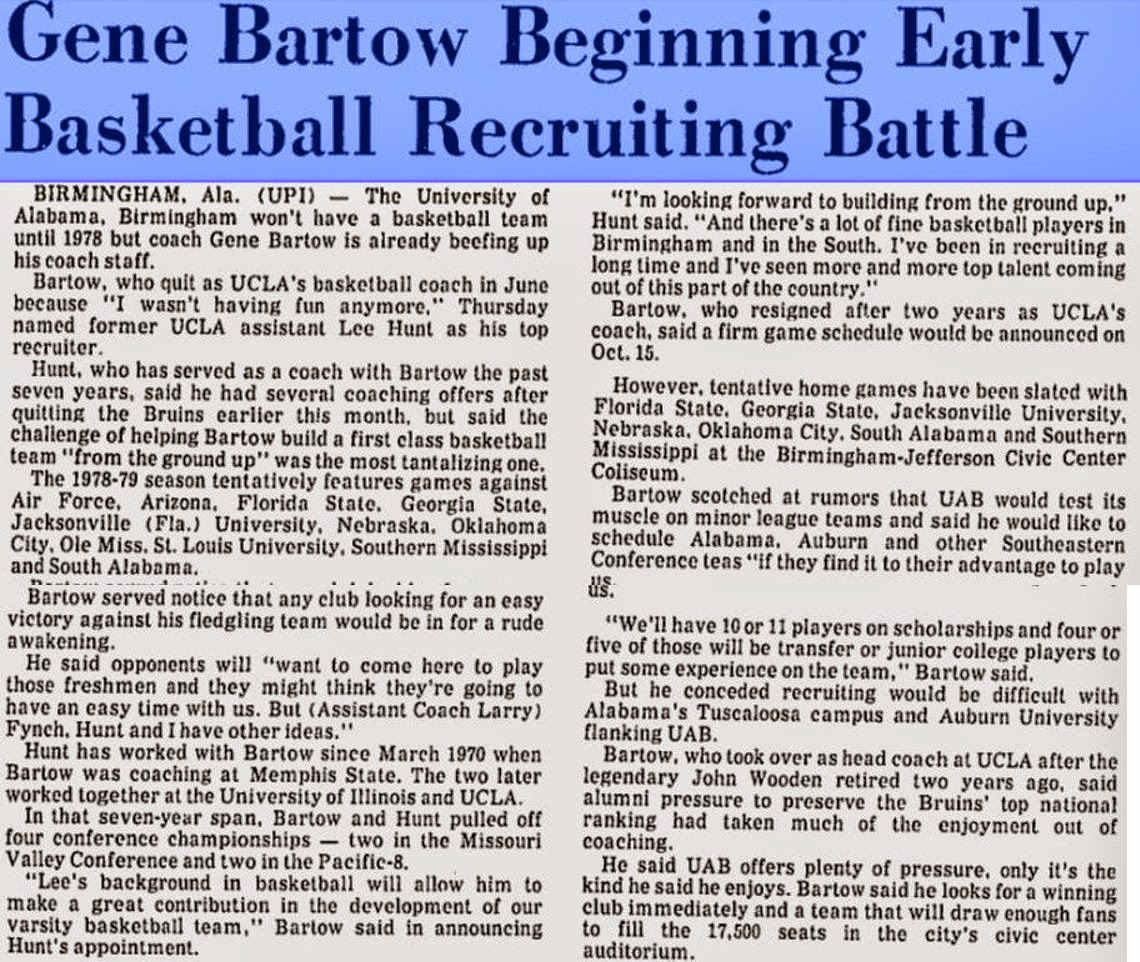