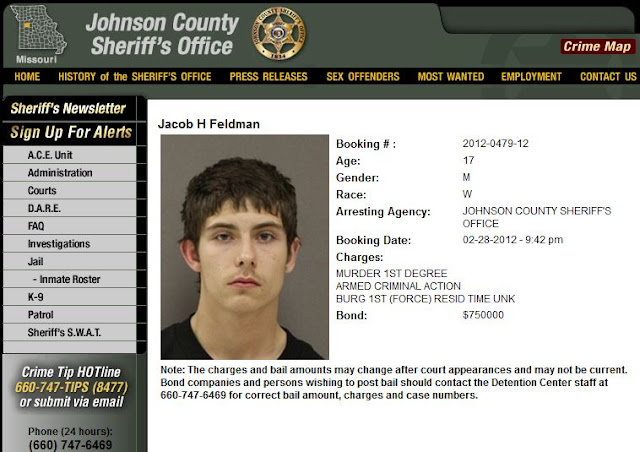 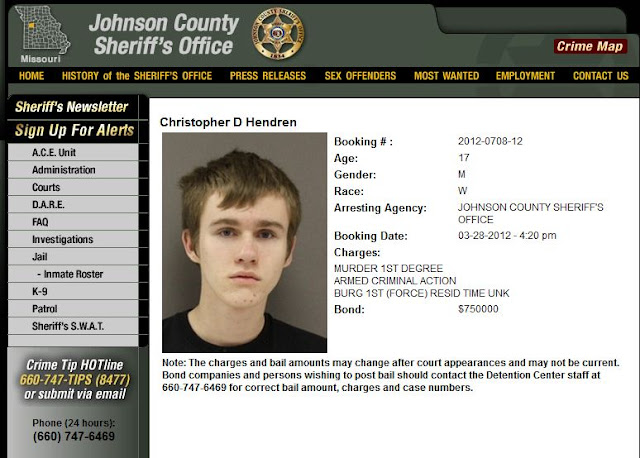 Jacob Feldman, shackled and wearing an orange jail jumpsuit, kept his head bowed during most of the hearing before Circuit Judge, and in front of an audience of 10 family members and several law enforcement personnel.

Mike Wagner Assistant Prosecutor said the state recommended a 25­ year sentence for the murder charge, 20 years for armed criminal action and 10 years for burglary. Sentences will run consecutively.  JoLeigh Fischer Prosecuting Attorney said Public Defenders and contacted him Wednesday about considering a reduced charge in exchange for the guilty plea.

Feldman’s original indictment charged him with first­ degree murder, which carries a mandatory life sentence without parole if convicted. The second­ degree murder charge carries a penalty of 10 to 30 years or life in prison.

Russell said uncertainty about how the Supreme Court will decide the issue of whether a juvenile can be sentenced to life without parole meant the county might have to retry the case in the future if Feldman were convicted of first­ degree murder.

He said prosecutors consulted with the victim’s family members, who “felt comfortable” with the reduced charge if Feldman received “an adequate number of years” in prison. On Friday, the state filed the new charges. Wagner then arraigned Feldman and entered not guilty pleas to the charges.

Pursuant to the agreement, Feldman withdrew the not guilty pleas and pleaded guilty to the three charges.

Berrigan said Feldman underwent two mental evaluations. A psychiatrist and a psychologist found him competent to stand trial and to assist in his defense. He said an issue of “diminished capacity” would have resulted in a jury verdict of second­ degree murder if the case went to trial.

During the hearing, Berrigan said Feldman had been treated throughout childhood for mental problems.

Feldman said he had been diagnosed with bipolar disorder, major depressive disorder and attention deficit hyperactivity disorder. He continues to take medication for problems that include depression.  Fischer presented exhibits to the court that included excerpts from the statement he made to officers following his arrest Feb. 28, 2012. He admitted he went to his father’s house, entered his bedroom and shot him in the head several times, “each time putting the casing in his pocket.”

Fischer also showed Wagner a photo of Feldman holding a rifle behind his father’s house about an hour before the shooting. After the shooting, she said, Feldman returned to his father’s house and put away the rifle. Berrigan said the confession came after six hours of interrogation by police. Judge denied a defense motion to suppress the confession, he said, adding Feldman knows the guilty plea means he will give up his right to appeal that ruling.

After Feldman pleaded guilty to the three charges, Berrigan questioned him about the facts in the case and acknowledged he had gone to Walter Feldman’s house the morning of Jan. 23, 2012, and knowingly caused his death by shooting him multiple times while he slept in bed.

In response to Berrigan’s questions, Feldman agreed he intentionally shot Walter Feldman with a deadly weapon, entered the house without permission “with the express purpose of committing murder,” and took multiple rifles to the house to kill his father. The defense waived a sentencing assessment report and asked Wagner to impose the sentence at the hearing Friday. Feldman declined to say anything on his own behalf and cried as Wagner pronounced sentence.  After the hearing, Russell said the prosecution had been preparing to begin Feldman’s trial next week on the first ­degree murder charge until the defense requested the plea bargain.

He said the psychiatrist and psychologist had been deposed and agreed that Feldman “suffers from mental disease or defect and lacks the ability to coolly reflect upon his actions … and lacks impulse control.”

However, he said, they also agreed that Feldman “did not lack criminal responsibility.” “It all came together about 9 a.m. (Friday),” he said, when Berrigan notified him Feldman would accept the plea agreement.“I feel from the family’s perspective, they have a sense of closure and finality today,” Russell said. “We’re happy to help give the family closure.”

Kristie Cross | January 13, 2015
A Centerview resident, originally scheduled to go before a jury this week, entered a guilty plea on Friday.  Jacob Feldman, 18, was taken into custody after his father Walter Feldman, 41, was found dead of an apparent gunshot wound to the head in January of 2012.  Feldman was charged with murder, armed criminal action, and burglary and pleaded guilty to each count.
The court sentenced him to 25 years in the Department of Corrections on the murder count; 20 years on the armed criminal action count; and 10 years for burglary.  All counts will run consecutive with one another.
SUE STERLING FOR THE DAILY STAR-JOURNAL, WARRENSBURG, MO.

WARRENSBURG -- Circuit Judge Bill Collins granted a motion to postpone the murder trial of Jacob H. Feldman to allow the defense time to complete medical and psychological tests on Feldman and take additional depositions in the case.
Feldman, 19, is accused of first-degree murder, armed criminal action and first-degree burglary in connection with the shooting death of Walter H. Feldman at his Centerview residence in January 2012.
The trial, originally set to begin June 10, will be held the week of Jan. 13 in Johnson County Circuit Court. A pre-trial hearing is set for 1:30 p.m. Dec. 22.
Collins will hear oral arguments on a defense motion to suppress Feldman's confession at 9 a.m. June 10.
In a six-hour suppression hearing Thursday, Detective David Mayhew of the Johnson County Sheriff's Office testified he and Matt Vessar, a former detective with the University of Central Missouri, picked up Feldman, then 17, on Feb. 28, 2012, at a home in Warrensburg and took him to the Johnson County jail where they interrogated him in a locked interview room for more than five hours.
Mayhew said they were unable to obtain a confession from Feldman. In tapes of the interview, Feldman repeatedly asked whether they would have to take him home if he asked, but Mayhew said Feldman never directly asked to be taken home.
Sheriff Chuck Heiss,who said he became acquainted with Feldman as the Crest Ridge School District resource officer, took over from Mayhew, stating the interview appeared to be stalling.
"I laid my cards on the table," Heiss said. "I told him we believed he had killed his father and why."
He said he shared his experience as an abused youth with Feldman and urged him "to do the right thing."
Feldman denied killing his father and eventually told Heiss he wanted to go home but said he would return and "talk to you and you only."
Heiss said at that point they did not have enough evidence to obtain an arrest warrant, and he agreed to take Feldman home.
Vessar said he continued to talk to Feldman after Heiss left the room and told him Heiss "has thrown you a lifeline; grab onto it as soon as you can."
Vessar asked Feldman, "What's your biggest fear?"
Feldman said, "Them doors."
Vessar said, "We can get past that. When you carry something around with you for so long, it wears on you."
He said he urged Feldman to unburden himself.
Feldman then said, "I'm not scared of the doors," adding, "I go crazy when I'm locked up. ... If I release that, I won't be able to leave."
Vessar told Feldman, "That's not necessarily true," but said he could not guarantee he would not be held.
When asked if he had shot his father, Feldman nodded, Vessar said. He asked how many times, and Feldman held up three fingers.
When Heiss returned, Vessar told him Feldman confessed.
Public Defender Pat Berrigan questioned officers about the location of the interview, in a rural area about five miles from town, and about the locked room, which Feldman could not leave on his own.
Defense witness Dr. A.E. Daniel, a child and forensic psychiatrist from Columbia, said he evaluated Feldman in two, two-hour sessions in March to determine his capacity to make voluntary statements to officers.
He said children's brains and neurological development are not mature before age 18 and that the lengthy interrogation, closed room and multiple interviewers "were not the proper techniques to use" on the youthful suspect.
The danger, he said, is that "at some point, children break down ... and reliability of their statements might be an issue."
He said Heiss' sharing of "intense personal experience with the defendant was a significant factor in breaking his defenses" and constituted "psychological coercion."
Because Heiss had saved Feldman "from many situations at school," Daniel said they had a unique relationship. "I think it was a poor technique," he said.
Repeated statements about wanting to go home indicated Feldman "was in a very uncomfortable situation," he said. "He was wanting to escape but unable to act on it."
Daniel said Feldman may not have understood all the components of the Miranda warning he signed.
He said Feldman's biological background included being born prematurely to parents using drugs that showed up in his system. His parents divorced and his mother "left totally for several years," Daniel said, adding, "Maternal absence is a key aspect of human development."
His father physically abused him, he said, and Feldman had multiple psychological hospitalizations with problems that included major depression, post-traumatic stress syndrome and attention deficit hyperactivity disorder.
Long-term use of psychotropic drugs could impact Feldman's cognitive understanding of the issues involved, Daniel said, adding, in his opinion, Feldman's statement "was not given voluntarily."
Berrigan, assigned to the case in November, requested a continuance in the case because he has not interviewed all the witnesses and is awaiting state funding for a neurological evaluation and brain scan on Feldman.
He said the defense is not claiming mental disease or defect as a defense or Feldman's competence to proceed.
"There could be an issue of diminished capacity and ability to deliberate," he said, that could mean the difference between a first- and second-degree charge.
Prosecutor Lynn Stoppy objected to the request, stating Feldman had been arraigned in April 2012 and the case has been pending for well over a year with previous counsel assigned.
"The defendant has been in custody for a long time," she said.
Berrigan said former defense attorney Max Mitchell had been waiting "for some kind of guidance" from the state when it decided that the capital division would handle all murder cases involving 17-year-old suspects.
Collins agreed to the continuance and said the June 10 original setting would be used to hear arguments in the suppression case and other motions. ___
(c)2014 The Daily Star-Journal (Warrensburg, Mo.)
Visit The Daily Star-Journal (Warrensburg, Mo.) at www.dailystarjournal.com
Distributed by MCT Information Services
Small Missouri Town Shaken

Hayes was a great person and will be greatly missed. Ho was loved by his entire Family.

Wow hayes you will be missed. I havent seen him in 15 years but still think of himm .