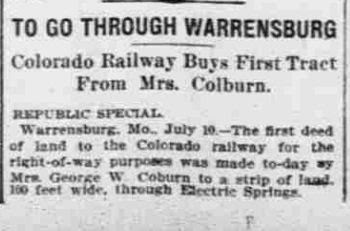 The Warrensburg station is located in the heart of downtown and is only a few blocks north of the campus of the University of Central Missouri. Linking St. Louis and Kansas City, the Missouri River Runner glides through the picturesque towns and landscapes that embellish the interior of the state. To highlight 30 years of state-supported passenger rail service, Amtrak and the Missouri Department of Transportation sponsored a 2009 contest to rename the trains (formerly the Ann Rutledge and Missouri Mules). The winning entry—the Missouri River Runner—reflects the fact that the route often parallels the Missouri River, ending and beginning at riverfront cities.

Opened to service in December 1889, the Warrensburg depot has been a steady presence in the lives of numerous generations of townspeople. Composed of the original one-story structure plus a later addition erected to the west, the depot was built with light grey sandstone quarried north of town. The walls of coursed, rock-faced ashlar give the building a strong textural quality; as the sun passes over the surface, it creates an evolving pattern of light and shadow. The third course from the ground protrudes slightly to form a water table at the level of the window sills.
The original building is divided into four distinct parts. A central pavilion is flanked by smaller, identical recessed wings that draw attention to the height of the pavilion. Attached to the western wing is another slightly smaller volume that features a classical, tripartite thermal or “Diocletian” window. The central pavilion is marked by prominent gabled bays on the track and street facades. Each bay is punctuated by three ground floor windows capped by a tripartite ventilation screen that mimics the look of a thermal window. The round arch of the louvered screen is accentuated by a band of stones while the wall surface below the screen is decorated with a run of stones in which every other block is recessed. Coping executed in smooth, finished sandstone caps each gable. Projecting onto the platform, the trackside central bay has windows on all three sides that would have allowed the station master to look out and monitor traffic along the rails.
The wings are topped by hipped roofs that intersect the steeply pitched roof of the central pavilion. On the east façade, two projections on the upper wall are most likely the remnants of tall chimneys which once rose above the roofline but were removed by the 1950s. A canopy supported by large brackets runs the length of the platform and serves to protect waiting passengers from inclement weather. In 1984, the depot was enlarged by the addition of a low, narrow baggage room on the west end of the building. It was clad in a stone veneer that approximates the sandstone of the original depot but shows clear distinctions in color and pattern. As the canopy extends along this addition, it widens substantially and sports a shallow gabled roof held up by posts with brackets.
Overall, the use of large, rock-faced stones and prominent arched openings recall the work of Henry Hobson Richardson, a Boston architect known for an oeuvre characterized by squat, compact buildings usually constructed with unfinished stone in dark red, tan, brown, and gray hues. The asymmetrical compositions were often pierced by deep-set, round arches reminiscent of Medieval Romanesque structures found in Europe; polychrome decoration was also a common feature. Richardson’s work would influence a generation of architects practicing in the late 19th century.
The exterior of the depot has not changed greatly over the last century except for the removal of chimneys and the conversion of the arched eastern window into a doorway sometime in the 1930s or 1940s. Although the interior space was remodeled in the 1960s to include new light fixtures and flooring, by 1972 the station was closed to the public. A decade later, the Warrensburg Chamber of Commerce formed a “Depot Renovation Group” to investigate the possibility of restoring the depot to accommodate its offices and a passenger waiting room.
The group raised $300,000 in part by selling a limited edition print of the depot created by a local artist; Chamber members also dressed up in period railroad clothing to attract attention to the history of the structure. The depot was rededicated in 1990 and the Chamber of Commerce office and the Amtrak waiting room opened for business in 1992. The Visitors’ Bureau later moved in and the western addition was transformed into a meeting space available to civic and business groups. Routine maintenance is necessary for any historic structure and therefore the Depot Renovation Group remains active.

Read about the murder near the train depot in March, 1884 and subsequent hanging of the the Hamilton's who committed the murder, and the placed the body on the tracks.
Warrensburg Murder Near the Train Station 1884, Hamiltons
When Europeans first visited this area of Missouri, it was occupied by the Osage and Kansa American Indians who had moved west from the lower Ohio River Valley in the early 17th century. The Osage and Kansa peoples spoke similar languages descended from the Dhegian-Siouan linguistic family; intermarriage was common.
After initial contact with French explorers in the late 17th century, a fur trade was established between the Osage and Kansa and the French colonists in the Ohio Valley and along the Mississippi River. The American presence was not felt until the completion of the Louisiana Purchase in 1803 which gave the young nation control over the immense territory drained by the Mississippi River. As the European-American population grew, its westward expansion in turn pushed tribes further west. The rich soils of Missouri attracted American settlers by the 1820s, and through a series of federal treaties between 1808 and 1825, the Osage and Kansa gave up their claims to much of the land in present day Missouri, Kansas, and Arkansas and were forced to locate on reservations. 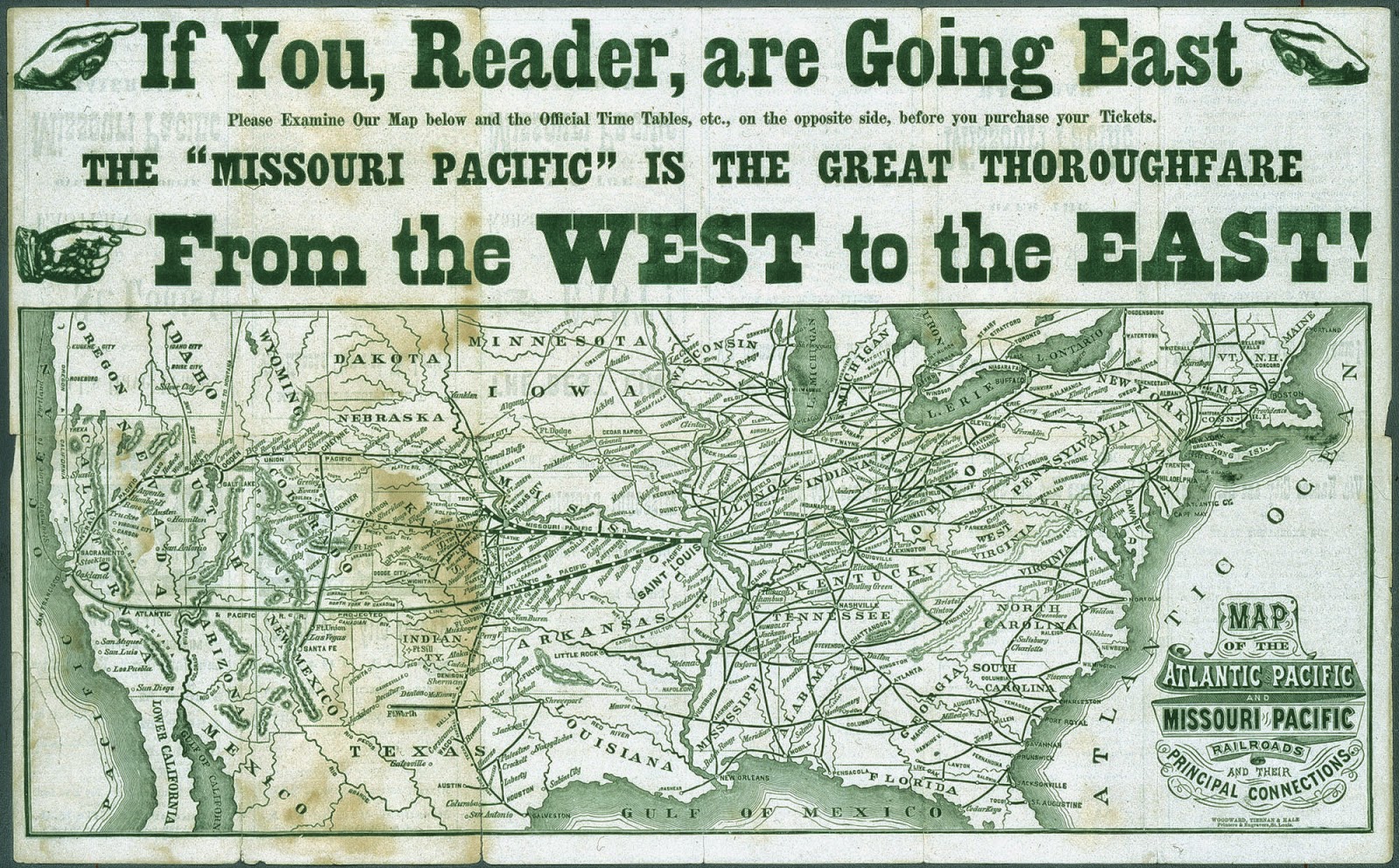 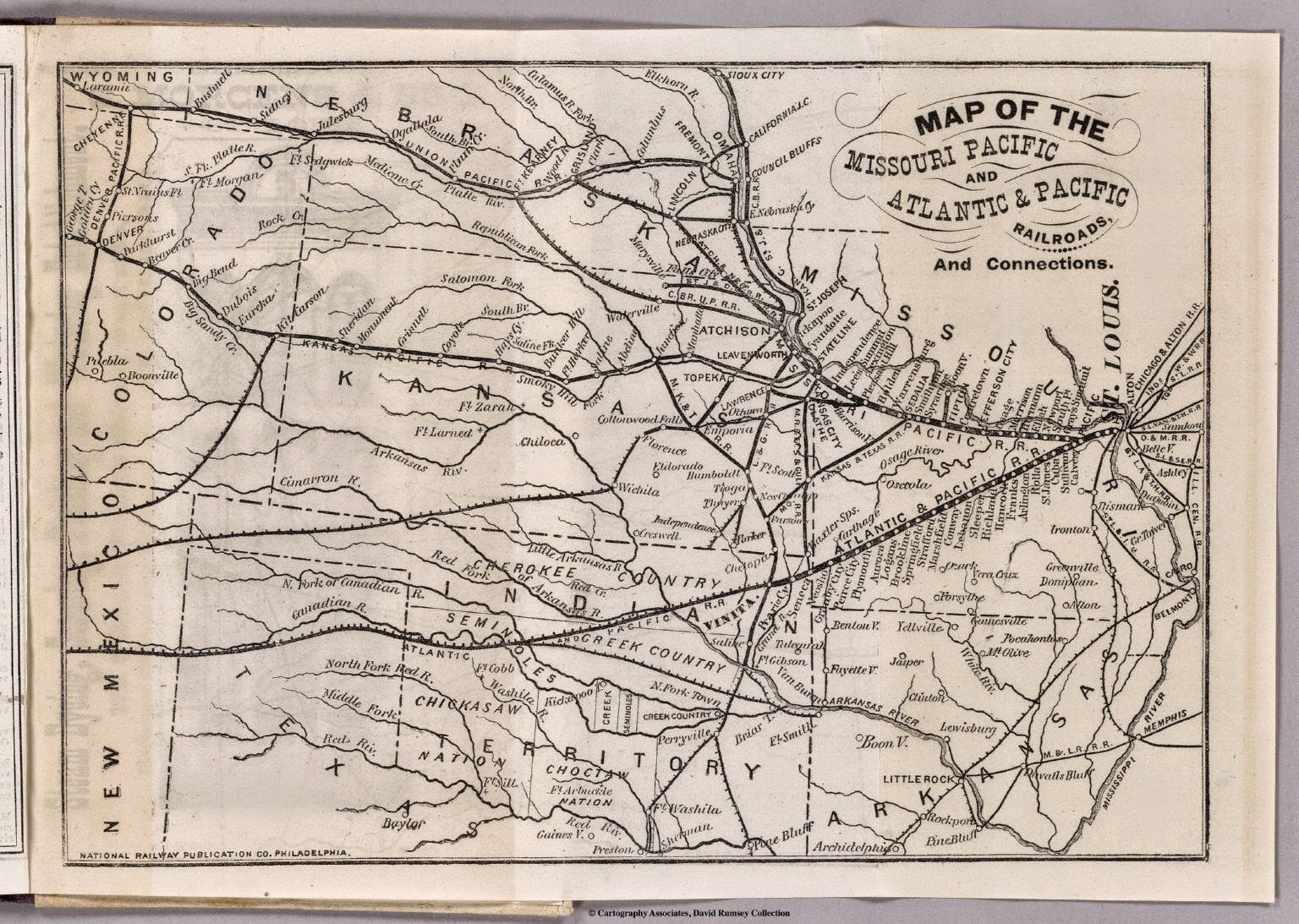 The township of Warrensburg was organized in October 1836 in an area known for its fertile land. Many of the original settlers came from Tennessee and Kentucky, including Martin Warren. Born in Virginia in 1763, he had fought in the Revolutionary War. Similar to many other frontier adventurers, he continually migrated westward over his lifetime. About 1833, Warren became one of the first settlers in what later became Warrensburg; a blacksmith, his services were sought by many of the early farmers.
Warren’s log cabin was located northeast of the Amtrak depot, and thus when the town was established in 1836 as the county seat, it was named in his honor. The next year, the settlement was platted; it centered on a Public Square that was to hold the courthouse, an essential institution for the governance of the county. Attendant businesses, such as lawyers’ offices and a hotel, were quickly established around the perimeter. The design and construction of a permanent courthouse was of immediate concern, and it was finished in 1841. Interestingly, one of the three commissioners to choose the site for the building was Daniel Morgan Boone, son of legendary frontiersman Daniel Boone. The two-story brick structure has a square floor plan and was built on a foundation of local brown sandstone. Rather simple in outward appearance, the highlight of 3 of the 4 facades is an arched entryway with 8-over-4 paneled double doors capped by a delicate fanlight. It remains one of the few early Federal-style courthouses still standing in the state.
Apart from the business of government, Warrensburg was primarily an agricultural center, corn later displacing wheat as the leading crop. Farmers came to town to purchase supplies and sell their goods, forming a prosperous mercantile community. After one generation of growth, a new force—the railroad—entered the scene and dramatically changed the layout and life of the community.
The Pacific Railroad obtained an 1849 charter for a rail line to run between St. Louis and a site in the western part of the state, with the aspiration of building to the Pacific Ocean. Ground was broken in St. Louis in 1851. Using rails, locomotives, and rolling stock shipped from England, the first five mile section of the road opened in 1852. Work was intermittent during the Civil War, but by July 4, 1864 the rails had reached Warrensburg.
That same year, construction began on the line eastward from Kansas City, opening to Independence in August. Only a few months later, Confederate Major General Sterling Price led a raid through western Missouri. He and his troops destroyed Pacific Railroad property, including buildings, locomotives, and rolling stock. The destruction was quickly assessed and repaired, and on September 19, 1865, the eastern and western sections of the railroad were joined; the first full run took 14 hours between Kansas City and St. Louis. In 1872, a reorganization of the railroad resulted in a name change to the better known Missouri Pacific Railway, and more than a century later it was subsumed into the Union Pacific Railroad.
Anticipating the path of the railroad, Warrensburg resident Col. Benjamin Grover laid out a plat in 1857 to the east of Holden Street. Grover had wisely made an agreement with the Pacific Railroad in which he donated 40 acres to be dedicated for a depot and other necessary structures such as a water tower and freight building. By mistake or otherwise, the depot was actually built in 1865 on land owned by N.B. Holden, west of Grover’s property. Only one image of the first station remains; it was a simple, one-story structure with a gabled roof and was clad in vertical wood siding. On the south elevation, a raised loading dock facilitated the movement of crates and parcels between the box cars and the freight room. 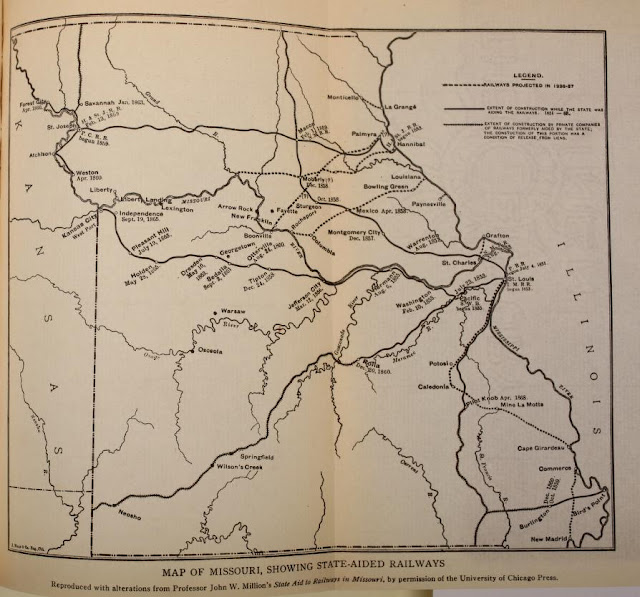 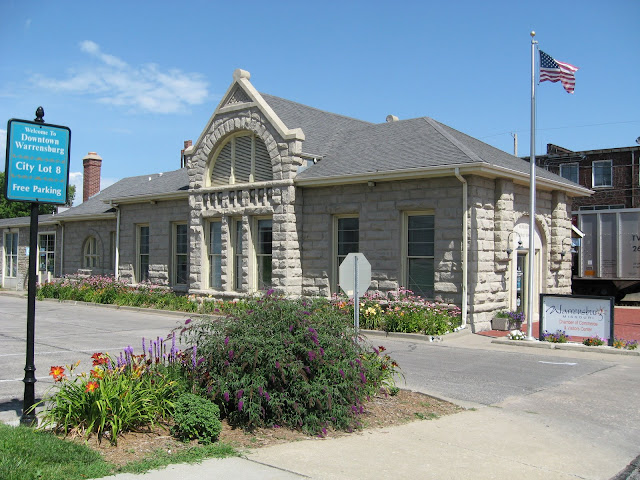 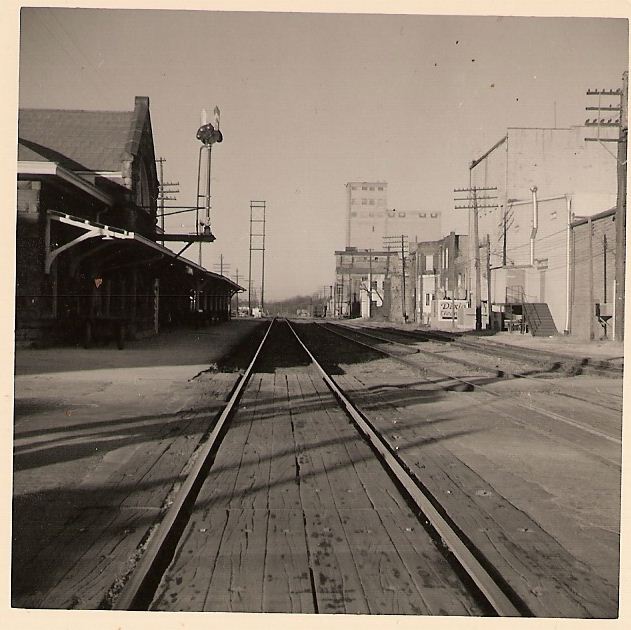 
THIS SMALL COLLEGE TOWN ONCE HAILED 2,000 STUDENTS IN THE EARLY 60s; it grew like gangbusters beginning in the late 60s and attained University status sometime in the last two decades. Like many of the Midwest's small towns, the introduction of large discount stores virtually ruined the down town as a shopping district. There was a certain charm, however, that could not be replaced: the bars. There was "The Last Draw" and the "High Hat Club" the two I recall without too much concentration. I majored in brewery education. There was a hotel called the "Martin Hotel" where one could get away from the stress of scholastic stress and listen to the cooing of pigeons on the window sill. I can still hear them, still see them, still hear the flutter of their wings and see the glean of their purple patina of feathered blessings. I vowed to write a best selling novel about old hotels and pigeons each time I checked in to study the art of the typewriter.

Hi . I did find some papers that my grandgranddad had. He was working as a carpenter on building bridges on the MO PAC. in november 1887. Thomas Christian Frederiksen, from Hulsig , Denmark - born 30 oct. 1853.
the letter is a form 817 from The Missouri Pacific Railway, Western Division, Omaha Nebraska , station dated nov 28th , 1887.