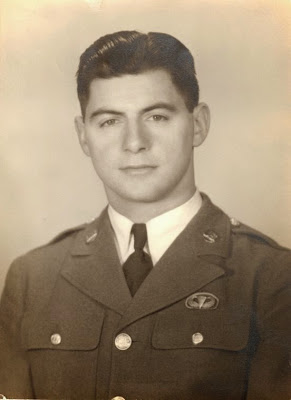 John Whitson Marr passed away on Jan. 19, 2015 at the age of 96, in Mill Creek, Wash.
Col. John W. Marr was from Warrensburg, MO.
He was the second child of John Keeney Marr and Golda (Perry) Marr and was raised near Warrensburg on the family farm. He graduated from Training High. He was drafted into the Army during WWII and became a paratrooper with the 507th PIR. He jumped into Normandy on D-Day where he led a platoon at the Battle of the La Fiere Causeway, in what has been called one of the costliest small-unit actions in US Army history. A memorial service was held this year on Feb. 7 in Amfreville, France, to honor him. He made his second combat jump in the Battle of the Bulge. He returned to the U.S. in September 1945, and the dashing Captain married the love of his life, Willa Fae Rumans, formerly from Versailles, Mo., in October. They decided to stay in the Army, settling in their first duty station at Fort Benning, Ga., followed by several more duty stations including: Germany; Fort Knox KY; Leavenworth, Kan.; Korea (without the family); back to Fort Benning; Fort Rucker, Ala. (earning his aviator wings); Carlisle Barracks, Pa. (graduating from the U.S. Army War College); Fort Wolters, Texas,(where he learned to fly helicopters); Arlington, Va., assigned to the Aviation Directorate in the Army General Staff at the Pentagon as Chief of the Plans and Programs Division; Vietnam commanding the 17th Combat Aviation group; and back to Arlington where he served as Deputy for Army Aviation. He retired and was called back to active duty to chair a Congressional Joint Service Study on flight pay legislation for the Department of Defense. Col. Marr officially retired in 1974 in Arlington, Va. with 32-plus years of service.
During his career he was decorated with the Army Distinguished Service Medal, two Silver Stars, two Legions of Merit, the Distinguished Flying Cross, three Bronze Stars, nine Air Medals, the Purple Heart and the Army commendation Medal. He was a Combat Infantryman, Master Parachutist, Senior Army Aviator and recipient of numerous campaign and service medals. He was decorated by the governments of Great Britain, France, Republic of Korea and Republic of Vietnam. He was inducted into the Infantry Officer Candidate Hall of Fame and the Army Aviation Hall of Fame. While at various duty stations he took college courses and earned a bachelor’s degree from the University of Nebraska at Omaha.
During his retirement, he and Willa built their dream house in Arlington, Va., where they lived for several years. He was a long time Kiwanian and Meals On Wheels volunteer. They moved to Mill Creek, Wash., in 2012 to be near their daughters.
John is preceded in death by his wife Willa; infant son, Kirby; his parents; his brothers, Galen, Rolla, Frank, Alan, Luke and Arthur; sisters-in-law, Dorothy and Eileen; his sister, Golda, and brother-in-law Emile (Junior).
He is survived by his daughters, Linda, Kathie (Joe), Karen and Connie (Dan); grandchildren, David, Mark, Lena, Nick; great-grandchildren, Jacob, Abby, and Anthony; and his sister, Shirley; brother-in-law Kenny; sisters-in-law; Joanna, Joan, and Betty; and numerous nieces and nephews.
He was a kind, generous and loving man, always willing to lend a hand and help others. His was a life well lived, and he will be dearly missed.
Lt. John W. Marr, D Day Oral History Video, Warrensburg, Missouri 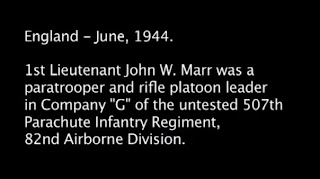 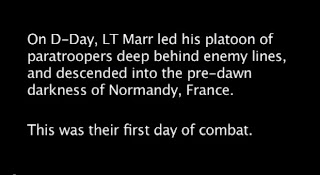 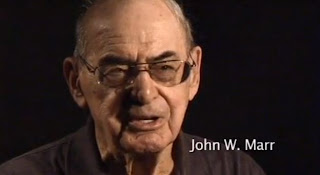 Uploaded to Youtube on Jun 3, 2009
Colonel John Marr was born in Johnson County Missouri in May 1918. He was drafted into the Army and entered service in June 1941. When he became aware of a new, specialized unit, the paratroops, which would give him twice his monthly pay, Marr decided to join up. After earning his jump wings he went to Officers Candidate School where he became a Lieutenant. He was assigned to Company G of the 507th Parachute Infantry Regiment and on June 6th, 1944 he was dropped behind the enemy lines with the 82nd Airborne Division. Lt. Marr saw action almost immediately after landing near Ste.-Mère-Église where he was involved in what is seen as the costliest small-unit action in United States Army history, at the Battle of the La Fière Causeway.
After his fighting in Normandy, Marr was put in command of Company B of the 507th during the Battle of the Bulge and continued to lead the company as it was the spearhead for Operation Varsity, the crossing of the Rhine River, on March 24, 1945. He returned to the US in September 1945 and continued his career in the Army, earning his Army Aviator wings and eventually commanding the 17th Combat Aviation Group in Vietnam and earning a Distinguished Flying Cross. Marr retired with the rank of Colonel in January 1974 after more than 32 years of service to his country.
Marr accompanied The National World War II Museum's travel group to Normandy for the 65th anniversary of D-Day

When John Marr was in high school he attended College High School. As a senior he weighed 140 pounds and was a star player in football.


John Marr fought in the Vietnam War. While he was in the Vietnam War he received two Silver Stars and one Bronze Star. He received these stars for his heroism. He was also awarded the British Military Cross and the French Fourraguerre. John Marr was also commander of the 17th Combat Aviation Group. He was also an Aviation Officer for the First Field Force in Vietnam. He had six years of army aviation. He also had a Pentagon assignment as assistant Chief of Staff for Army Aviation Force Development.