"In 1833, just six years after the first permanent American settlement in the area, Martin Warren, a native of Kentucky, set up a blacksmith business at the northeast corner of present-day College (Miller then) Street and East Gay Street and erected a log residence. First known as Warren’s Corner, the cross-road location ultimately became known as Warren’s burg." From 1924 History book - "Often the question is asked why the angle in the street; of the east part of the city. Col. Benjamin W. Grover bought these lands in 1845 of Martin Warren who had built a pretentious log house, of four rooms and a kitchen house, near the northeast corner of what is now Gay and Miller (renamed College) streets. There was also a fine elm tree still nearer Gay, standing in Miller street. Miss Lizzie Grover says the tree was of no importance, but the house was, and as it stood in way or if run due east, the angle was made that the house might remain intact, which it did until torn down, and the frame took its place a little further away."


In 1836 John Evans opened the first store in Old Town and for the following six years there were only two stores in the village. Evans conducted a general mercantile store, selling groceries, dry goods, hardware, and whiskey. This store stood in the hollow a little east of the center of the town. W. H. Davis & Co. were the first to open a store on the hill near the center of the old town. The town soon began to prosper and in a short time was an important business center and settlers came from a radius of several miles to do their trading here.


The town was extended eastward into the district known as New Town by the official platting of Grover's Depot Addition. October 18, 1857. It seems that according to a contract with the railroad company the depot was to be erected on Colonel Grover's land, forty acres of which were donated for that purpose, but by mistake or otherwise, it was located on Major Holden's land, one-half mile further west. Holden Street, on the west side of which the depot is located, is the dividing line between Grover's and Holden's Addition. The township of Warrensburg was organized in October 1836 in an area known for its fertile land.


Many of the original settlers came from Tennessee and Kentucky, including Martin Warren. Born in Virginia in 1763, he had fought in the Revolutionary War. Similar to many other frontier adventurers, he continually migrated westward over his lifetime. About 1833, Warren became one of the first settlers in what later became Warrensburg; a blacksmith,  his services were sought by many of the early farmers. 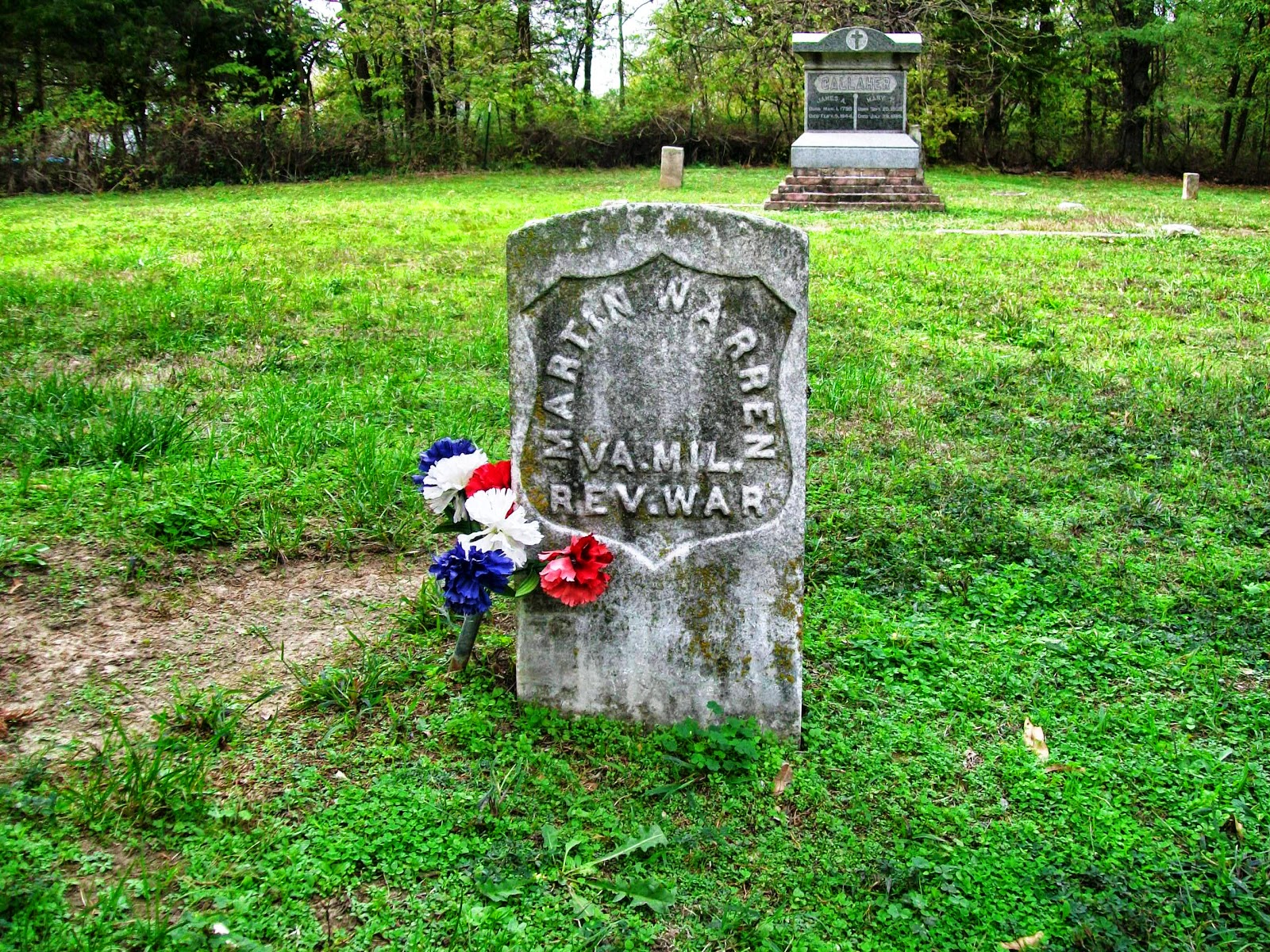 Warren’s log cabin was located northeast of the Amtrak depot, and thus when the town was established in 1836 as the county seat, it was named in his honor. Martin Warren, a blacksmith by trade, had a centrally located house that was not difficult to discover. Prairie residents would repeatedly stop by at the Warren house to inquire information about settlements, laws, and other people. This stopping place was initially referred to as Warren’s corner. Over time Warren’s corner became Warren’s Corner, which became Warren’s burg, and eventually became the current name Warrensburg. 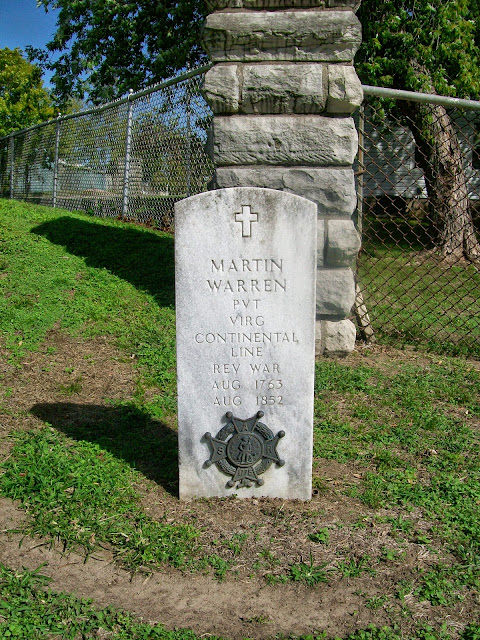 
The next year, the settlement was platted; it centered on a Public Square that was to hold the courthouse. Martin Warren's old log house stood in the Grover Addition and Colonel Grover resided there for a time. The memory of the old log house will be forever perpetual in the history of Warrensburg. When they came to layout Grover's Depot Addition it was seen that Gay street continued east past Holden street in a straight line and would go right through the old log house. So, instead of moving the house. Colonel Grover moved the street. He diverted it enough south to miss the house. Every other street running east was correspondingly diverted and the north and south streets left north and south. And today every street from Gay to the railroad and east of Holden street runs at an angle southeast and no lot in this territory has a square corner. (see street map view) Martin Warren, a blacksmith by trade, had a centrally located house that was not difficult to discover. Prairie residents would repeatedly stop by at the Warren house to inquire information about settlements, laws, and other people. This stopping place was initially referred to as Warren’s corner. Over time Warren’s corner became Warren’s Corner, which became Warren’s burg, and eventually became the current name Warrensburg. 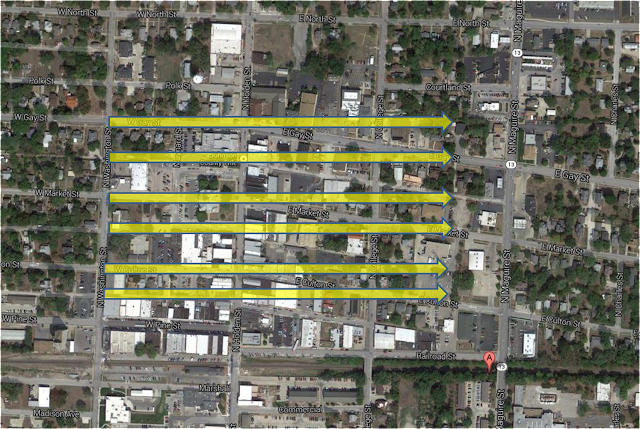 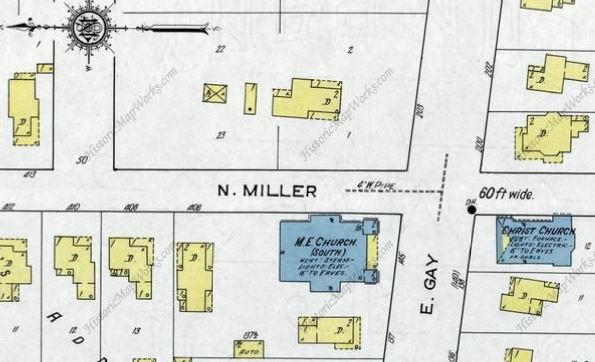 There is Martin Warren's Cabin
N. Miller later named College Street
Warrensburg, Missouri Just North of N. Miller
Martin proceeded to build one of the largest log houses in western Missouri with two main connecting rooms on the main level, each about 20 square feet apiece. Each room had large chimneys, one made of stone and the other created out of bricks while the upper level contained a hall, another room, and an attic. A separate 20 square foot building was created to the west of the main house and used as a kitchen as was customary at the time out of fear of fires. 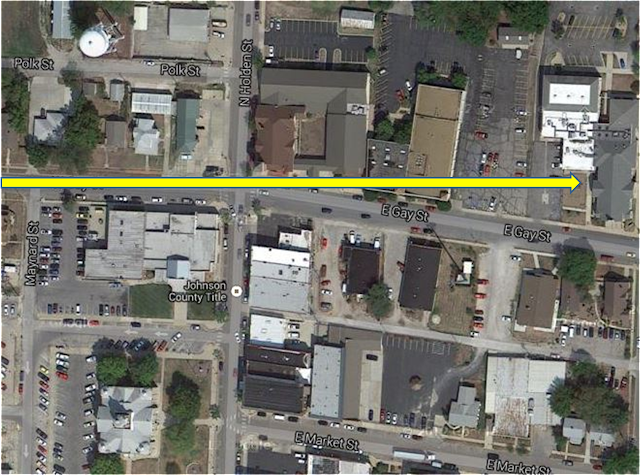 
The general tendency of business was toward New Town and when the railroad was built and the depot established here, practically the entire business district was established in that vicinity.


Major Nickerson said: "The New town was commenced at the foot of Holden Street where a little wooden passenger and freight depot stood on the Missouri Pacific railway where the passenger depot now stands, and a string of one-story wood store-house straggled along on West Pine Street. 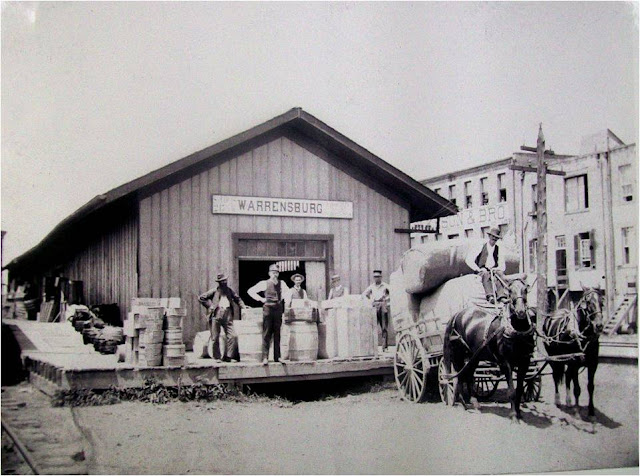 There were no houses south of the railway except a small frame hotel that stood on the corner where the Young Women's Christian Association building now stands. An ordinary country road ran up a steep hill to South Street, and then ran southeast across the grounds where the Normal School (UCM) buildings now stand, to Maguire Street, which was the main road to Clinton, and from South Street onward towards the south there were no streets but all was brush and woods."
"I built my residence in the woods and when I went to see the workmen, my only road was the center of Holden street along the surveyor's line, a cut of four feet with a thick brush and either side, to the place where the work was being done.
"The political and social condition of the place was in a state of civil chaos. The camp gangs that had followed in the wake of both armies lingered around and about the place, many of them have their homes in this county, rode from Texas to Iowa, robbing the people of their property and murdering strangers from other states who came to buy land and settle amongst us. When these roving criminals were in Texas they claimed to be Confederate soldiers, and they were in Iowa they passed as discharge soldiers from the Union army. When any of the gangs was in Warrensburg they made their headquarters at a grog shop kept by an old man whom they affectionately called 'Uncle Billy,' and when they imbibed their Uncle Billy's fire water and got drunk they ranged the streets of the town and shot it up in true cowboy's style; they urged their horses into the storerooms, discharged their firearms and terrorized the owners and their clerks. When they met a man who had a good horse, mule or saddle, they forced exchange for their worthless trappings and overridden, broken-down stock, at the point of the pistol, and if they resisted they insulted and beat their victim. They dominated the town in every way, by their criminal, brutal force made Warrensburg an unfit place for human habitation."Source: "History of Johnson County, Missouri" by Ewing Cockrell, 1918 Transcribed by Karen Hammer - 2009


Settlement of Johnson County and Warrensburg. In 1833, just six years after the first permanent American settlement in the area, Martin Warren, a native of Kentucky, set up a blacksmith business at the northeast corner of present-day College Avenue and East Gay Street and erected a log residence. First known as Warren’s Corner, the crossroad location ultimately became known as Warren’s burg. In 1834, the Missouri Legislature authorized the organization of Johnson County, naming it for Colonel Richard M. Johnson of Kentucky, who shortly thereafter became the Vice President of the United States (1837-1841). In addition to directing the establishment of a courthouse, ferries, roads , and bridges, the Johnson County Court, at its first regular meeting, considered a petition to establish a public school. After the school’s formal organization in 1834, the residents again petitioned the court to form a school district. The court established the school and a school district, but the lack of public funds precluded public funding and, instead, the school began as a private subscription school. In 1836, the community gained a post office.