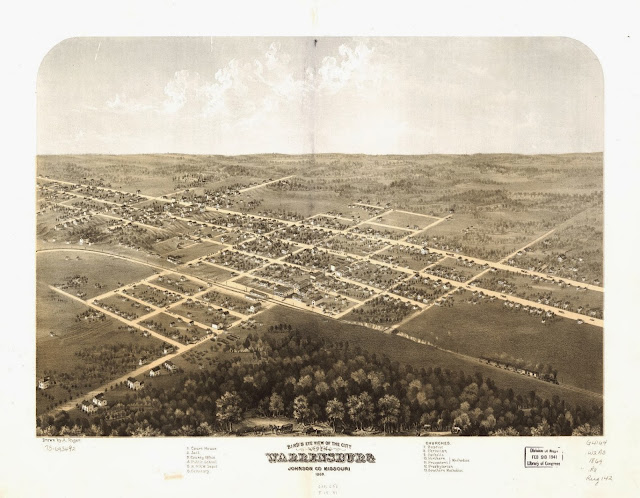 Early Establishments.-In 1836 John Evans opened the first store in Old Town and for the following six years there were only two stores in the village. Evans conducted a general mercantile store, selling groceries, dry goods, hardware and whiskey. This store stood in the hollow a little east of the center of the town. W. H. Davis & Co. were the first to open a store on the hill near the center of the old town. The town soon began to prosper and in a short time was an important business center and settlers came from a radius of several miles to do their trading here.
The town was extended eastward into the district known as New Town by the official platting of Grover's Depot Addition. October 18, 1857. It seems that according to a contract with the railroad company the depot was to be erected on Colonel Grover's land, forty acres of which were donated for that purpose, but by mistake or otherwise, it was located on Major Holden's land, one-half mile .further west. Holden street, on the west side of which the depot is located, is the dividing line between Grover's and Holden's Addition. Martin Warren's old log house stood in the Grover Addition and Colonel Grover resided there for a time. The memory of the old log house will be forever perpetual in the history of Warrensburg. When they came to lay out Grover's Depot Addition it was seen that Gay street continued east past Holden street in a straight line and would go right through the old log house. So, instead of moving the house. Colonel Grover moved the street. He diverted it enough south to miss the house. Every other street running east was correspondingly diverted and the, north and south streets left north and south. And today every street from Gay to the railroad and east of Holden street runs at an angle southeast and no lot in this territory has a square corner.
The general tendency of business was toward New Town and when the railroad was built and the depot established here, practically the entire business district was established in that vicinity. This was in 1845.
Fires.-Most of the business buildings were frame. Among the first merchants to establish themselves in New Town prior to 1865 were Ming & Cruce, Henry Neill. A. H. Gilkeson & Co., Henry Bros., and De Garmo, Schmidlap & Co. All these business houses and a large part of the town were burned December 24, 1867.
On November 29, 1873, another fire destroyed the hotel, several business places and cost the lives of four persons. Since then, with the business district chiefly brick and stone, there have been no such fires.
Early Hotels.-The first hotel in Warrensburg was built in 1837 by Young E. W. Berry. It was located on the north side of the public square in Old Town and was a small log house of six or seven rooms. He sold it in 1840 to John Mayes, and he in 1842 sold to Joseph McLeary, and he in 1856 to John D. Smith. Smith improved it and called it the Mansion House. At the breaking out of the war. Smith died and the hotel was closed.
The second hotel, also log, was opened in 1841 by Zacariah T. Davis on the southeast side of the public square. Davis ran the place for about six or seven years, when he sold it to Y. H. Anderson, who afterward rented it to Daniel Rentch. Anderson finally sold it to Thomas Ingle, who kept hotel here during the war, and was succeeded by Col. J. D. Eads. In 1876 he sold it to the Germania Club.
The third hotel was built by James Bolton in 1857 on the south side of the public square in Old Town. In 1861, it was taken by the soldiers and used for a hospital and guard house all during the war. It practically marked the end of the hotel business in Old Town.
The first hotel in New Town was in 1865, when the Redford House was built south of the Missouri Pacific railroad depot. This was destroyed by fire in 1868 and the Simmons Hotel was built on its site. This was finally bought by Mr. J. N. Christopher and converted into the town's first school dormitory, the Young Women's Christian Association building, and is successfully running now. (1900 ca)
In 1870, a building at the southeast corner of Holden and Culton streets was erected for the Cumberland Presbyterian church. In 1875, it was bought by A. W. Ridings & Company and enlarged for a hotel. A little later it was bought by Mrs. J. D. Eads, and became for many years the Eads Hotel and only recently was replaced by Cohn's store. (also became the St. Cloud Hotel at one time).