Empire Hall Link
When Francis M. Cockrell was elected United States Senator the first time, Warrensburg gave him a rousing reception at Empire Hall, to which place he was escorted by his home town band.
Colonel Elliott introduced the new Senator and Senator Cockrell responded in a memorable speech.  When returning from the residence of Mr. Cockrell,
where the band had escorted the Senator, Mr. Kauffman, who played the bass horn in the band, opposite the (Market Street M.E.) Methodist church,
stepped accidentally upon a loose board in the old wooden sidewalk and the opposite end of the board flew up, tripping Lon West and causing him to fall forward several paces, his instrument going several feet in advance of him.  Mr. West was an adept at swearing with whom few could compete and none equal, and Mr. Kauffman states that he outdid himself that evening as he gathered himself together and began to search for his horn. 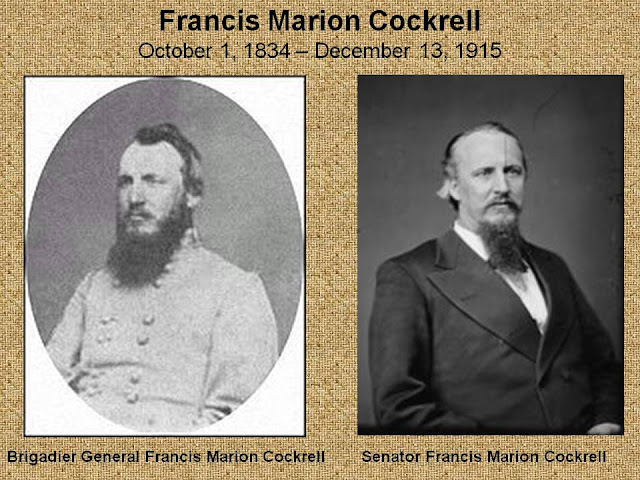 July 3, 1883
Statewide Prohibition Convention - Empire Hall, Warrensburg- Night Session
At the evening session last night to hear C. P. Johnson, of St. Louis. His speech was full of convincing arguments and striking illustrations and was listened to with marked attention.  Every one of his bearers could not help being impressed with his earnestness and his devotion to the cause for which he spoke.  It was a masterly effort.

- January 29, 1878 The Goldens are advertised to appear at Empire Hall Monday night.  They play the grand sensational drama, entitled “Divorce”, and they no doubt will be greeted with a crowded house.
- January 29, 1878 The sharpshooters had a masquerade ball, at Empire Hall, on Thursday night.  It was a grand affair and numerously attended.  The fashion reporter of the NEWS gives some of the toilets.  Here is one as found in the columns of that enterprising journal.
- January 29, 1878 “Miss Z. The dear blonde wore a pair of No. 6 half-mourning shoes and darned hose, a valuable cashmere night cap, trimmed with colored elite amphibious honi soit.  The demitrain was looped with side-track switches and more antique shoe strings”
- Dec 2, 1879, The ladies of the Old School Presbyterian Church gave an oyster supper at Empire Hall, Tuesday night, last, which was a most enjoyable affair.
- Dec 2, 1879, The interior of Empire Hall now presents a neat and attractive appearance.  First-class troupe will find this a good show town with a good hall.
- Dec. 5, 1882, The skating rink is the “big card” at Empire Hall.  Large numbers attend the afternoon and night meetings.
- Dec. 5, 1882, Roller skates are the rage at present, and the noise in Empire Hall awakens those sleeping in the cemetery.
- April 17 1883, Charles A. Gardner and company will play ”Karl” at Empire Hall on the 17th.
- Dec. 31, 1885 New Year's Eve Party Empire Hall with 300 Guests 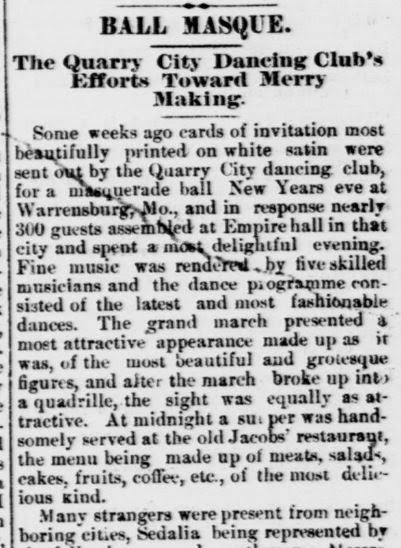 BALL MASQUE
The Quarry City Dancing Club’s Efforts Toward Merry Making.
Some weeks ago cards on invitation most beautifully printed on white satin were sent out by the Quarry City dancing club, for a masquerade ball New Years eve at Warrensburg, MO and in response nearly 300 guests assembled at Empire Hall in that city spent a most delightful evening.  Fine music was rendered by five skilled musicians and the dance program consisted of the latest and most fashionable dances.  The grand march presented a most attractive appearance made up as it was, of the most beautiful and grotesque figures, and after the march broke up into a quadrille, the sight was equally as attractive.  At midnight a supper was handsomely served by  the old Jacob’s restaurant, the menu being made up of meats, salads, cakes, fruits, coffee, etc, of the most delicious kind.  Many strangers were present from neighboring cities, Sedalia, being represented by the following gentlemen: Messrs, Will Guenther and Will Ellis, costumed as “English Dudes”; Will Ramsey, as an “English swell”; Ed Ken as as “winker”; and Frank Hughes, as a “West Point cadet”; Mr. Tom Courtney was also present but unmasked.
Among those from Holden were Misses Sade and Cora Johnson, attired as “Italien Girls;” Peter Waumeter, “Clowns;” and several others appropriately costumed.  Others present were David Yankee as a “page;”, W. Williams “confederate soldier”; H. Landiers, “farmer;” E. N. Johnson “dude;” E. Nathan, “Turk;”, Edgar Hughes “yankee”; C. Williams, “French soldier;” C. Ruffin, “cowboy;” G. Williams, “prinece;” A. Meyers, “gladiator:” Ben Harris, “band man;” B. F. Ross, “military man;” R. J. Gladden, “English soldier;”, Sam Spiece, “German soldier;” O. H. Simpson, “Highlander;”, Turner Hornbuckle, “English Dude,” Will Clarke “CadetL;” H. Clark “Soldier”, T. Robins, Clown”, W. Beasley, “hermit”, H. H. Logan, “Falstaff”,  G. Cord and J. Thornton, “Siamese Twins”, E. Hyrack, “Sailor”, W. E. Ashton, Peck’s Bad Boy”, Miss Emma Zick, “Queen of Hearts”, Nellie Duffield, “pack of cards”, Mollie Bruce, “Topsy”, Pet Baile, “Italian girl”,  "Ella Harris, "Snowflake;" Lizzie Harrison and Fannie Plessner, "school girls;" Jessie Rogers, -'jockey," Nannie Bedford, beautiful as an "angel;" Blanche Jordan, "Drunkard;" Jessie Middleton, "Nell coming thro' the rye;" Nellie Shockey, a first-rate "cat," Fannie Montgomery, "Scotch girl:" Sue Waggoner, "Night" .Many others were in costume but the list is too long to give, suffice it to say that all took their characters well, and not until the unmasking were many recognized. The whole affair was a complete success and the guests made many praiseworthy comments on the managers. The Bazoo extends thanks to Misses Kate Shockey and Nannie Bedford and Messrs. Simpson and Cooke for favors rendered and hopes the club will live to give another masquerade.