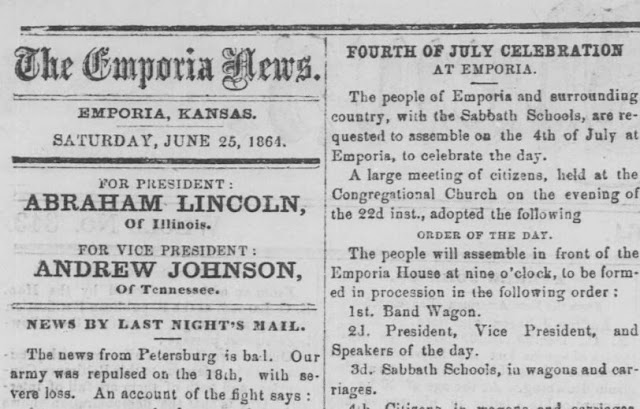 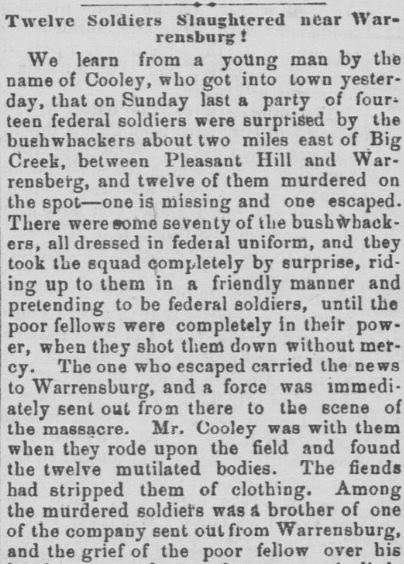 
We learn from a young man by the name of Cooley, who got into town yesterday, that on Sunday last a party of fourteen federal soldiers were surprised by the bushwhackers about two miles east of Big Creek, between Pleasant Hill and Warrensburg, (Strasburg-La Tour MO area) and twelve of them murdered on the spot one is missing and one escaped There were some seventy of the bushwhackers, all dressed in federal uniform, and they took the squad completely by surprise, riding up to them in a friendly manner and pretending to be federal soldiers, until the poor fellows were completely In their power, when they shot them down without mercy. The one who escaped carried the news to Warrensburg, and a force was immediately sent out from there to the scene of the massacre. Mr. Cooley was with them when they rode upon the field and found the twelve mutilated bodies. The fiends had stripped them of clothing. 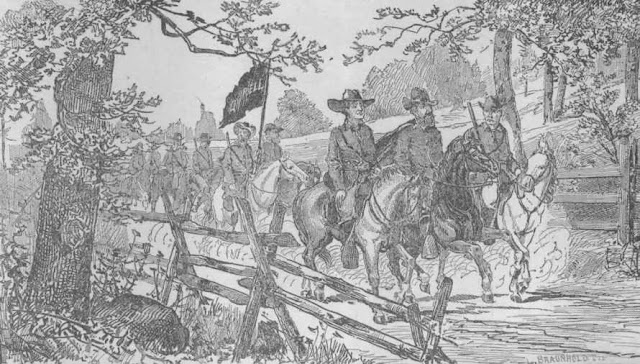 Among the murdered soldiers was a brother of one of the company sent out from Warrensburg, and the grief of the poor fellow over his brother was sad enough to see. A little distance from where the soldiers had been murdered, but previous to the commission of that atrocity, the bushwhackers had robbed the stage and passengers. Several hundred letters and papers were lying on the road rifled of their contents. Mr. Cooley picked up one of the letters which he exhibited to us. It is from James McKenna, 75 Cornhill, Boston, a laboring man, and directed to his mother, enclosing her 20. The wrapper had been torn off so that it is impossible to tell where it was directed to. Of course the money was gone. Mr. Cooley will return the letter to Mr. McKenna. Mr. Cooley is a very ingenious young man, who has just got into the country from Toronto, Canada, He came by the way of the Pacific Railroad, and succeeded in working his way through from Warrensburg to this point, going much of the way on foot. How long shall such atrocities as these continue.